Actual Paint and a little bit of Bruckner 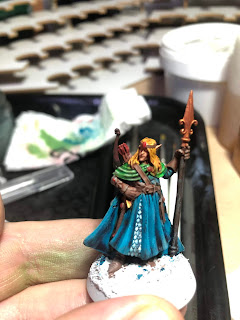 For the first time in months - and, in fact, this year - I've put some paint on a model. It's been so long I did find it a bit tough, slow going as I remembered how this Painting Lark works. The model is a Reaper Anniversary figure of "Elanter, the Lost Prince". I experimented a bit with contrast paints on the robe, cloak and hood.

They were excellent at setting up the shadows and highlights after just one coat, but it definitely felt like "not enough" to me an I wanted to do more. Unfortunately on the cloak I was impatient and tried to start a drybrush on it before it was fully dried, so the rescue on that took a whole while.

Once it is properly dry, though, a light drybrush or edge highlight with very little else is amazing and really brings out the contrast on the model. I did that on the green hood with nothing else and you can see how well it works even on my blurry WIP pic.

I hope to be getting back to him over the evenings this week and to have him finished in time for next week's progress update. 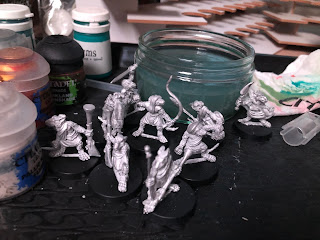 Next up for assembly are some Oakbound rat men who have been volunteered for test paints for my upcoming Skaven army. These ones are called Gnawlochs, and I picked up a few in the Kickstarter because I liked the look of them before I decided I was going to do a Skaven army. As I'm not planning to use any non GW models in this upcoming army project, some random schemes while I try and decide how the army will get painted will give a nice rag tag look to them.

Unfortunately, I am an idiot and had not put the lid on the super glue properly. So, I've ordered new glue and paused the assembly having cleaned up the (very few) mould lines on the Gnawlochs. I'll also need to do a bit of a shopping trip to find some paint options for them. I'm definitely planning on using Contrast paints on them, but I'm just not quite sure what yet.

Once the Gnawlochs are assembled, the next thing I'll be working on is my Heroquest tribute models. I'm pretty excited to get to them and get them all done. In fact, I'm almost as excited to get to show you them on the blog, because I think they're pretty awesome. 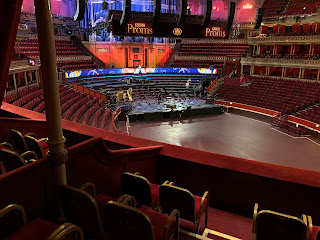 My newly retired parents took me to see the Proms at the weekend. It was Prom 31, for those who find it relevant. We also went to the recording of the interval talk beforehand. Now, I'm not really a classical music expert - I like listening to it but I don't know much about it. And I unintentionally got a bunch of knowledge which I got excited about and am now going to impart to you. Because I like art. Like that time I ended up rambling on a whole bunch about the woodcuts of Albrecht Dürer. Sorry. Not sorry.

Bear with me there may be a lot of simplification here because I am not a classical music nerd. My knowledge comes from Wikipedia, the Proms programme and a 45 minute recording by two classical music professors who assumed their audience knew the subject.

So, it turns out that lots of famous classical musicians you've heard of were all active at the same time, in the nineteenth century Vienna. This includes all the composers featured in this Prom - Brahms, Strauss and Bruckner.

Brahms was a traditionalist, looking back to historical composers. The piece played at the Prom was "Variations on the St Anthony Chorale". Brahms thought the piece was by Haydn, although modern analysis makes it apparent it almost certainly isn't.

It got me thinking about how the piece stands on it's own accord, despite being a "variation" on an earlier piece of work. Tying back to painting, we have so many people copying existing styles at present (particularly John Blanche's). That has more gotten to the point of a small, niche artistic movement of a sort, for all that it has one name attached to it. As I get back into painting, I'm going to be doing a few "studies" of painting styles I want to emulate, but I also want to find my own style and way of doing things once I've gotten confident. Variations, not copies.

The second piece was four songs by Richard Strauss (Op. 27). They were a wedding present for his wife. Two of the songs were based on poems by John Henry Mackey - a gay Scottish anarchist living in Germany. Mackey outlived Strauss, and in fact died shortly after one of the famous Nazi book burnings. That a contemporary of Brahms was inspired by a poem by someone who lived to see the rise of the Nazis made me start thinking more about timescales in history, and where people from various eras would overlap in ways we wouldn't realise, despite the different periods being very familiar.

(Also, LGBT* have always been there, just usually over-looked by history. None of this is new.)

There's no painting  revelation on that one - just a musing on time, and our ability to understand time periods by assigning them into arbitrary eras that don't necessarily draw the connections we might otherwise.

The final piece was Bruckner's 4th Symphony. This was the piece that was discussed in the talk we heard recorded beforehand. Bruckner was a perfectionist who massively planned out his work beforehand, and then repeatedly revised them over and over once they were 'done'. I'm sure none of that sounds at all familiar to anyone reading this...

But through this talk, inspirations were constantly mentioned - Bruckner modelled after Beethoven and was a fan of his contemporary Wagner. Mahler in turn was inspired by Bruckner . . . one artist inspiring another, who in turn inspires another. With the growth of the internet, and our own hobby, the transmission of inspiration is quicker and more global than ever.

What we seem to end up with, though, is less of a geographical limit on styles. You can still see the differences between British miniature painters and Spanish, and the Northern and Eastern Europe have a different style again. But you get more exchanges of ideas - you're more likely to have styles proliferate in one internet community or another rather than a local town.

But this has happened before, with classical music composers in 19th century Vienna, and I have no doubt it will happen again.
Posted by The Responsible One at 22:17

Email ThisBlogThis!Share to TwitterShare to FacebookShare to Pinterest
Labels: Painting, Skaven, Speculation, This week, to do