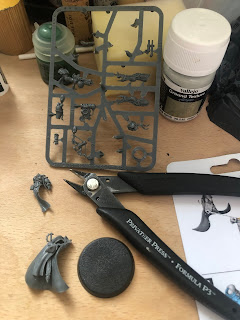 This post is a bit "old school" themed this week. And not just because I've failed to finish anything. I'd tried for a little while to schedule posts in advance, splitting up models I'd finished across several weeks to pace out the posts. I've now reached a point where I haven't got anything finished - so here's an up to date, unscheduled post of what I'm working on.
Please do let me know in the comments which types of posts you like. I'm kind of curious.
Anyhow, I got a bit tired painting last night so spent a little time starting to assemble a GW Inquisitor model before I stopped hobbying all together. There's very little in the way of mould lines, but there's tons of parts and you definitely have to follow the instructions rather than guessing! A very different approach to having a couple of arms or a head to stick on, which is what I've been used to of late. 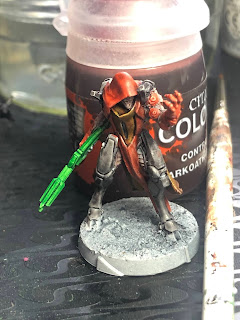 The Shrouded is coming along. I'm reaching the stage of fiddly tidy up, where very little progress takes loads of time. I'm also about to try a different process for the gun to see if I can cut down the number of steps it takes. 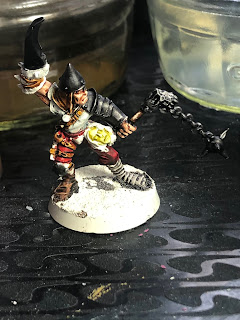 I'm also working on this classic pit fighter with a mix of contrast and metallic paints. He's coming along OK, I guess. The Basilicanum Grey contrast over the metal has come out much darker than I thought it would, so I'm going to dry brush it back up. 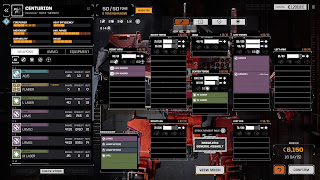 In a different kind of "old school", I picked up the Battletech computer game and have been playing it a whole bunch. It's delightfully nerdy and involves trying to manage the weight, damage and heat production of your different weapon types.
I strongly suspect that this is something that's much, much better in a computer game than a tabletop battle game, as having to work all this out by hand and then roll dice would be a nightmare!
Posted by The Responsible One at 18:17