I had originally planned on posting about my little excursion to Darksphere on Sunday to go to a painting day, where I met up again with Max von D and Marta from Platoon Britannica.

I planned on showing off my newly finished Imperial Beastman, who is finally done.

Then a package arrived from Europe today. 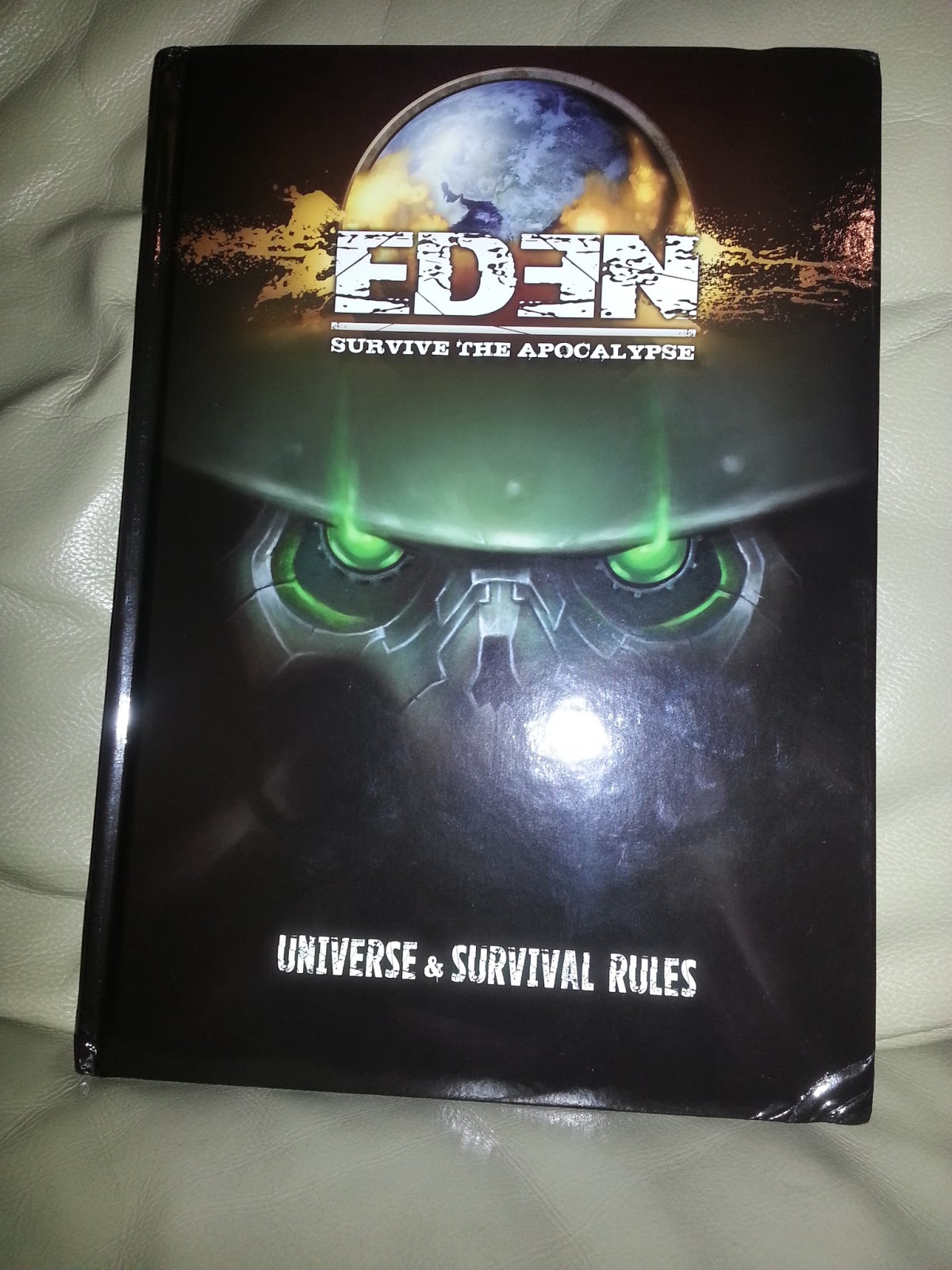 My stuff from the Eden Indiegogo Campaign had turned up.

So plans went out the window.


The original plan had been for much of what I got to be Sim's Christmas present. As it was, I got her a small thing then, and this now - although she now has Battle for Alabaster nearly here now. 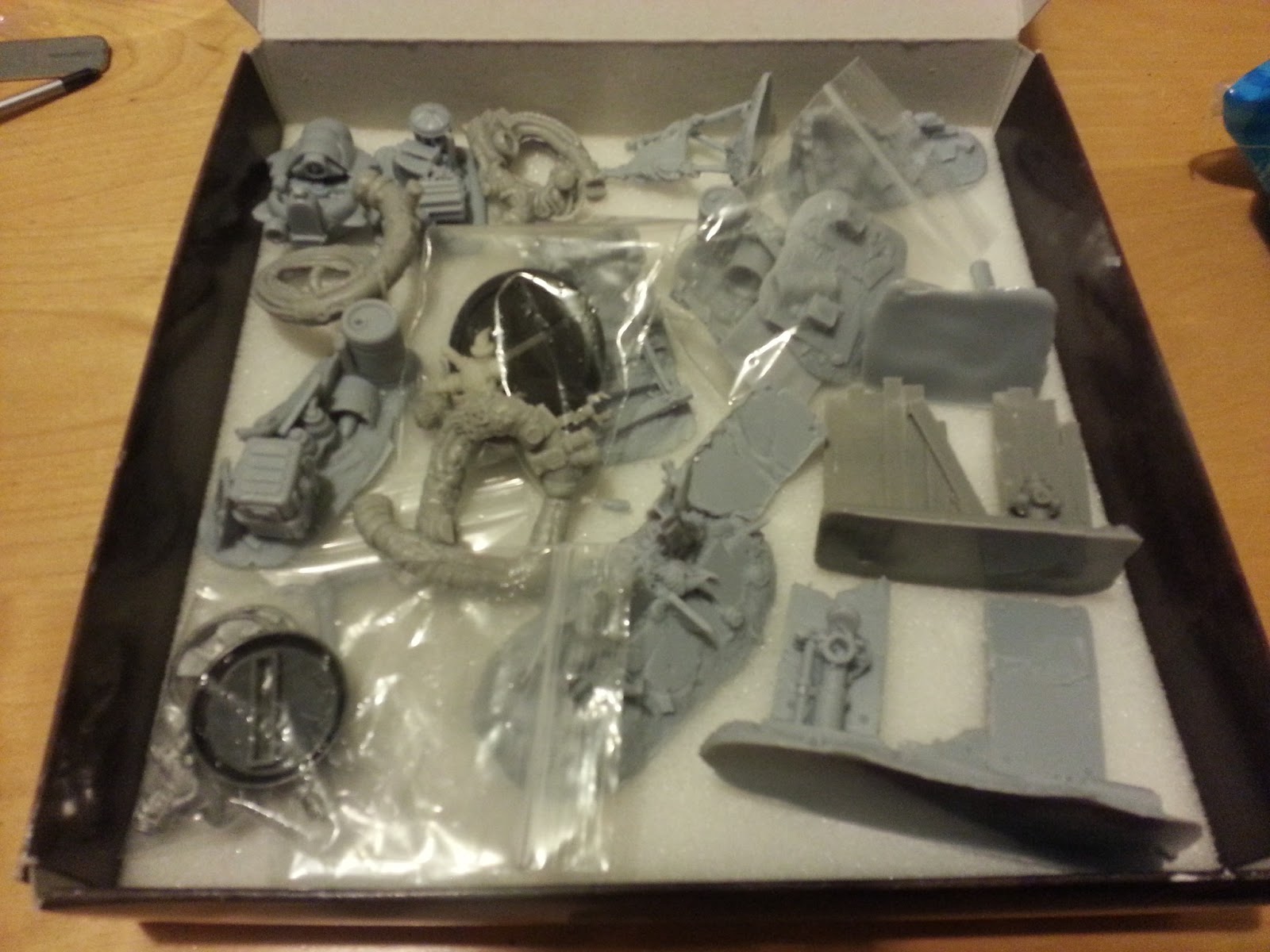 This is all Sim's stuff - a box of scenery, three limited edition pieces of scenery, and two ISC robots.

I've now read the rules of those robots. I may regret getting them for her. They are going to eat my Jokers for breakfast.

Still, it wasn't entirely presents for Sim. I had bought myself things! 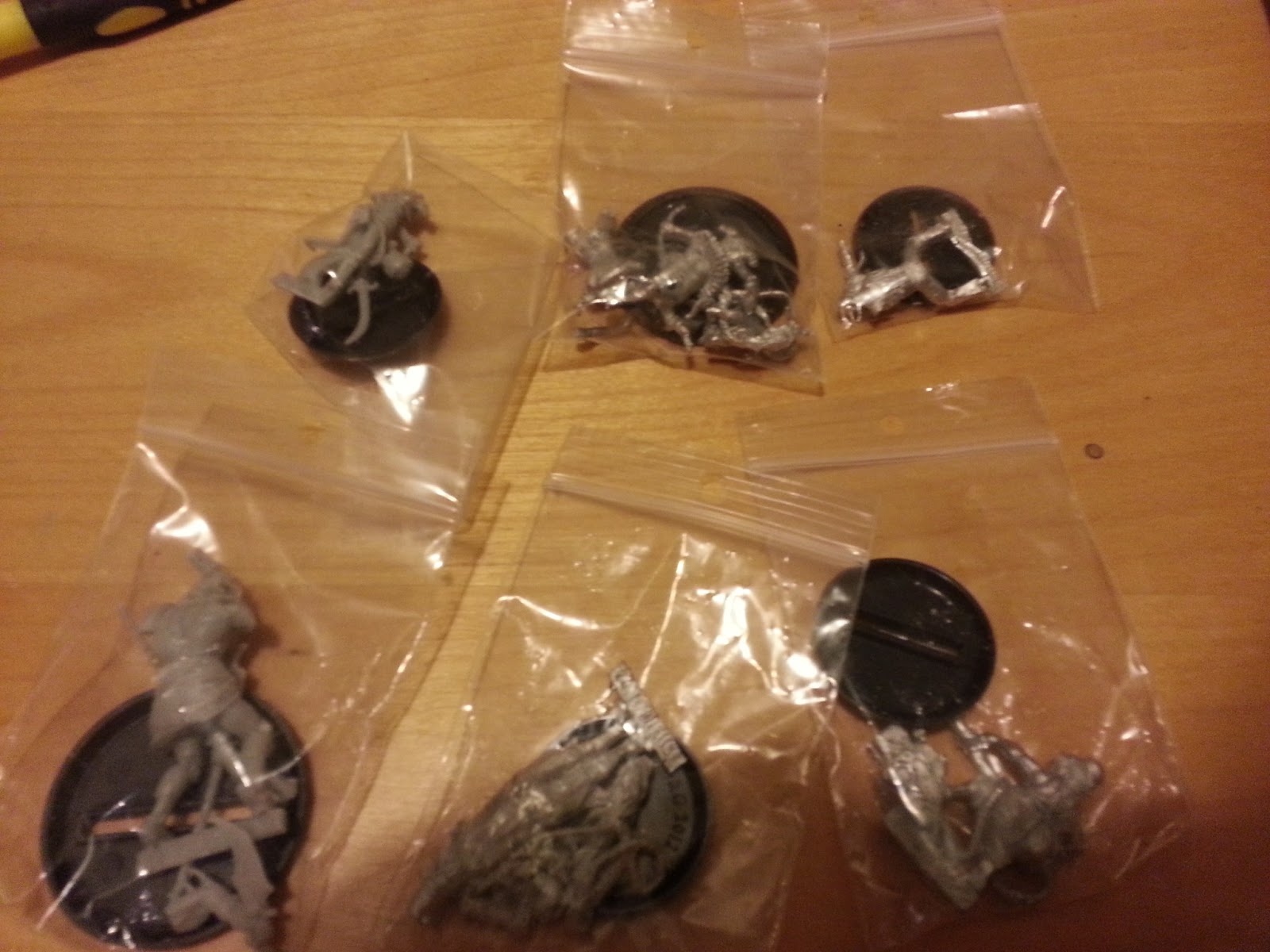 I have started a Joker's faction for Eden myself. My 100 point (standard sized) force consists of four models. Although one is a pair of tumbling acrobats which looks like a nightmare to put together.

There are also two Askari (another faction) which Sim or I will pick up at some point when we are in a mood to do so. 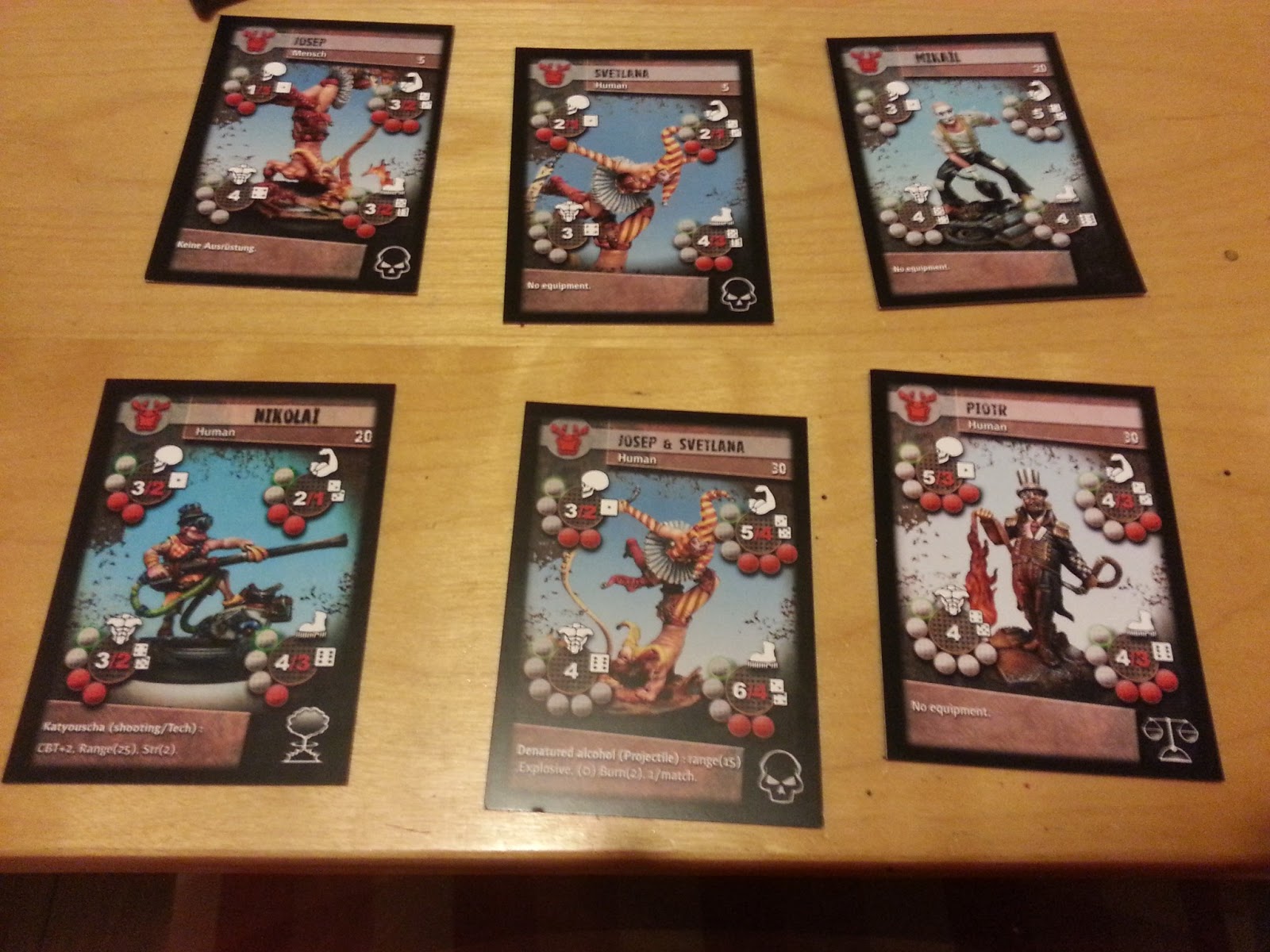 So, here's the cards for my faction - a pair of tumbling acrobats, a ringmaster, a mime and a clown with a vacuum cleaner.

What could possibly go wrong?

One of the cards was unintentionally in German, but I know from Taban's reputation that this will get sorted out with no problems. 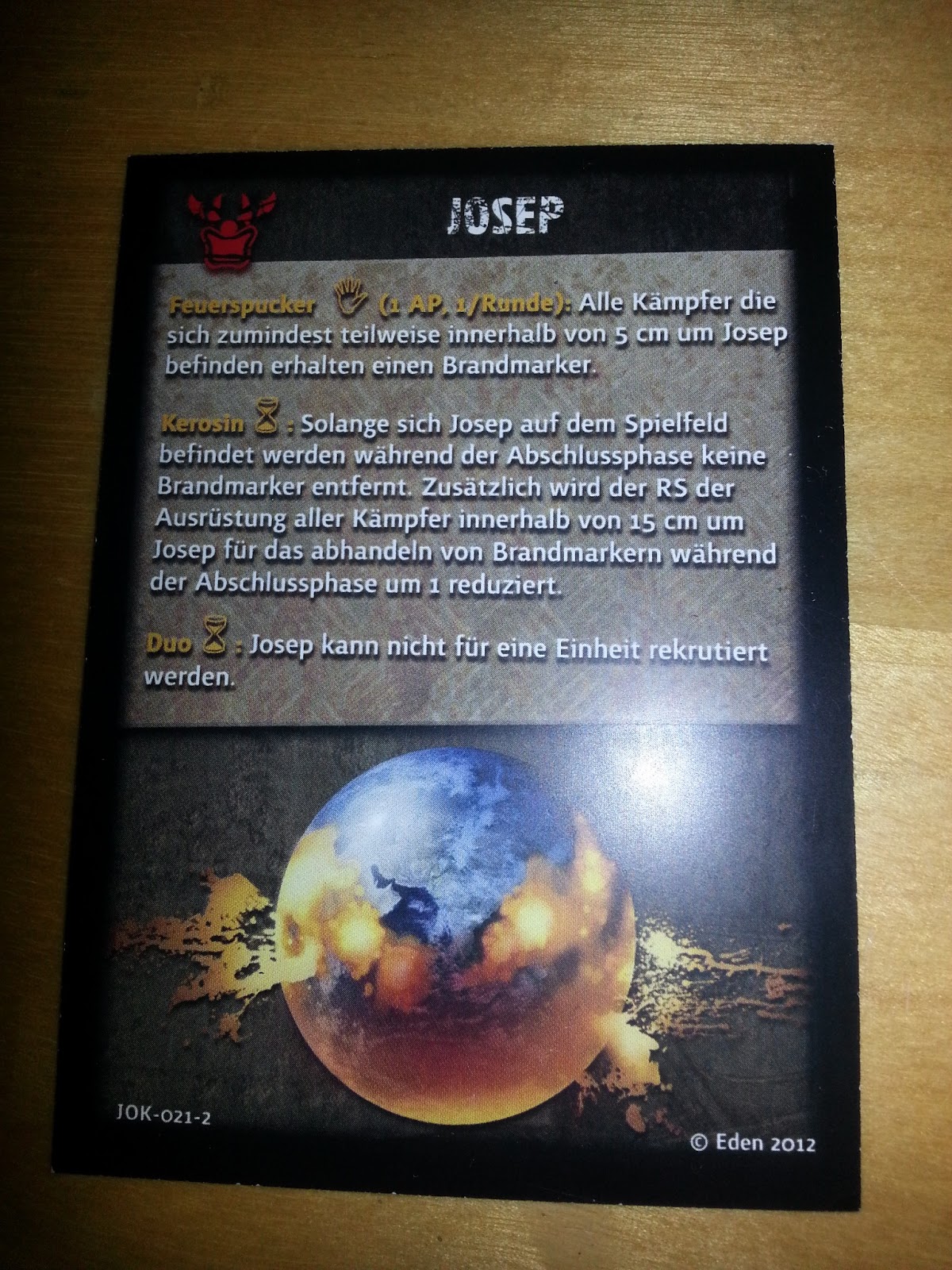 I am enchanted by the book. It is mostly the world background and faction details as the rules are very simple, and the rules for each model comes with that model.

For those of you used to Games Workshop's slick production values, you will spot a few foibles. There is nothing wrong with any of the pictures or the layout. That's lovely. But it seems that Taban's translators have decided to stick with the unique style which Taban's self translated work carries.

Now, I'm being a bit tongue in cheek here. My French and German is shocking compared to the Taban crew's English, and that might be why I find the wording issues endearing rather than infuriating. No "Read as Written" Games Workshop player will tolerate the instruction to play on a 60 metre square board (not 60 centimetres). None of the important paragraphs have been left in the original French by mistake. And no, "Category" doesn't have an "h" in it, nor "Ireland" two "I"s.

But these little tweaks, which will undoubtedly really irritate Mohand, actually make me love this game even more. It makes me laugh, and nothing actually stops me playing the game or makes it harder. The book remains absolutely gorgeous, the miniatures are works of art, and I hope to have a lot of fun running around causing anarchy in this wonderfully dreamed up post apocalyptic world.

I also got a nice signed art print. Not the book cover as advertised, but a better one. I may share it later. That's totally me loving it so much I'm holding off on sharing, not that I forgot to take a photo of it. Honest.
Posted by The Responsible One at 23:29