This is a controversial post that has been brewing in my mind for quite some time now. It is based on a statement which I am aware will probably result in a not inconsiderable amount of controversy...


Let me start by saying that I do follow Oldhammer blogs, and even more INQ 28 blogs. I know people who are starting up Rogue Trader campaigns. I am a huge fan of all of these things.

But that doesn't mean the thing we're a fan of is any good, nor would it be anything special in today's market.

To put this in context, I only ever played one game of Rogue Trader. I was ten, and visiting a kid I'd met at some after school French class my parents had encouraged me to take. He was not much older, and made no real effort to help me play, simply walking me through the massacre of those of his forces he'd lent me, twice.

Still, my enthusiasm wasn't swayed, but the Fantasy section appealed far more to me. So, when I went to secondary school and discovered kids there who played, it was Fantasy I got into first. By the time I decided to try 40K, Rogue Trader was gone and it was all plastic starter sets...

As a result, I don't have the awesome nostalgic feeling for Rogue Trader. I never owned it so didn't spend hours pouring over its every page. I did that with Warhammer Armies and Mighty Empires.

So I'm aware that my undying love for that early Warhammer Fantasy is not matched by a love of Rogue Trader. Looking over both sets of battered old rules now, I have reached the conclusion that my love of the old Fantasy game is not subjective - it's based on nostalgia.

Don't get me wrong. I love me an old and clunky rules system - I tried out INQ28 earlier this year, as some of you may remember. But I play INQ28 for the storytelling aspect, not the slick and well put together rules system. 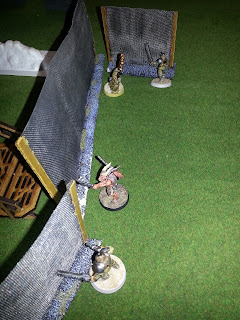 And then I got to thinking - why am I using the Inquisitor rules? The extra rules are nice, but we could play the same thing out using Inquisimunda rules faster and with a lot less pain. Then it hit me - the rules set is not what people are signing up for - rather, they are signing up for the play experience. In some way, Inquisitor has been protected by its terrible rules - the only people playing it are those who focus primarily on story because anyone looking for a competitive game have fled screaming. Inquisitor focuses on the story and detail at the expense of slick and easy to follow rules. I suspect many Oldhammer players are similar.

That's not to say you can't have fun with these other systems, but unless you care about detail focussed systems, they are probably not for you. I do still intend to one day run an Oldhammer era Mighty Empires campaign, with all its glorious, glorious book-keeping. But that is a thing for the future.

Orlygg recently posted some thoughts on how to get started with Oldhammer. This is a really good source for anyone interested in such things - and don't get me wrong, I really want to get into such things. But it's likely I'll do so with mostly newer models, because that's already what I'm focussing on for other projects. Collecting older figures is something I can understand, but it isn't the core of my hobby - its mostly, for me, about the painting and the gaming. Oh, and the blogging.

So yes, I will probably be interested in setting up a few little scenarios, without points values, with the figures people have available, some point in the future. The question is - do I really need to use the old rules for it? I will certainly try out the old rules, out of interest, but I could just as easily use 6th Edition 40K, or 8th Edition WHFB to do so.

What the Inquisitor and Oldhammer players are keen to say is that you don't need to be lining up your figures and playing a sets points value, mission from the book battle - you can add a lot more character and narrative than that. But perhaps we can take that aspect and apply it to the games we're currently playing without learning a new rules set? That's certainly something to ponder.
Posted by The Responsible One at 19:00