Progress over the weekend, arbitrators and assassins and Dark Angels, oh my!

This week, an irresponsible moment on ebay resulted in this. 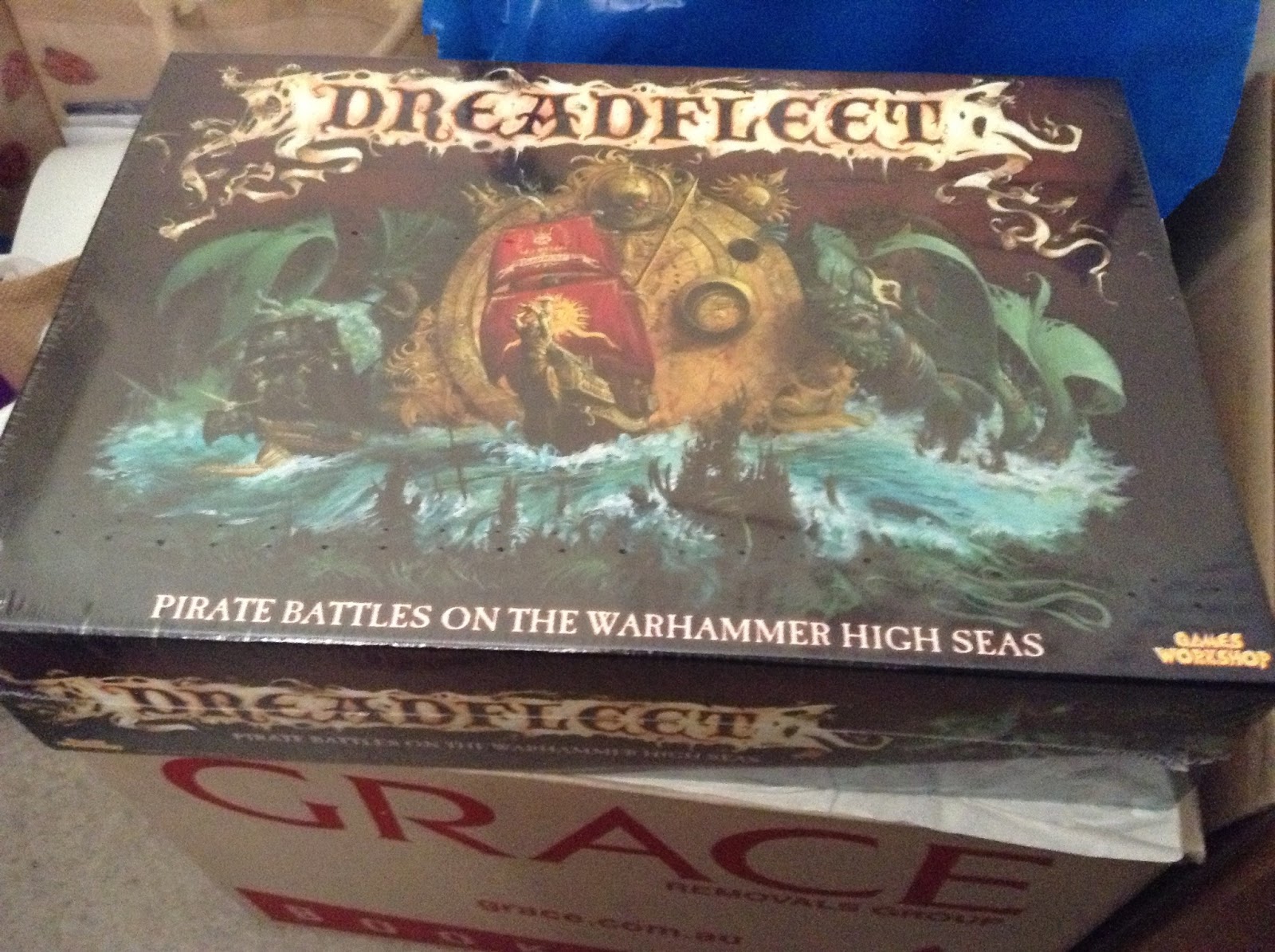 I also went on a bit of a spree through the "Collectors" ranges on the Games Workshop site, as they will sadly shortly no longer be with us, and I didn't want to end up in the sad state I am over not having the Frenzied Mob from Mordheim I've been having acquisitive thoughts over for so long.

So I'm also aware that when they arrive, my "painting score" is going to take another hammering.

This motivated me to get modelling and painting this week, and I'm pleased to say I've finished a bunch of projects. The weekend, in particular, has been super productive.

On Wednesday, I was at the 40K slow grow league at Dark Sphere as usual, when a young gentleman (he said he was 12) came in and asked me lots of questions about games, particularly about which one he should start. As the store staff were busy with people paying for things, I had a chat with him about the different games available, and what they were like.

He bought a Troll Bouncer with the money he had (and a bit of the money his elder brother had, after a bit of arm twisting), and as he was too young to be loaned the shop glue, I agreed to assemble it for him. This resulted in me providing a short and impromptu tutorial on basic rules of assembly. "See how I'm cutting towards my thumb like this? Don't do that when you're doing it." 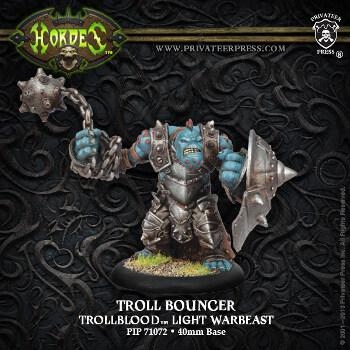 The model was actually remarkably easy to quickly put together. The mould lines were easy to spot and clean off with a scalpel blade (my preferred means of cleaning). It seems Privateer use a different type of plastic to the one I'm used to, and I will say I'm rather impressed with it.

The young gentleman was able to, on the basis of the completed figure and enthusiasm, persuade his father to allow him to purchase a Hordes two player starter box, and left happy. Fortunately, I then had someone turn up late to the slow grow so I still got a game in and didn't keep anyone waiting. 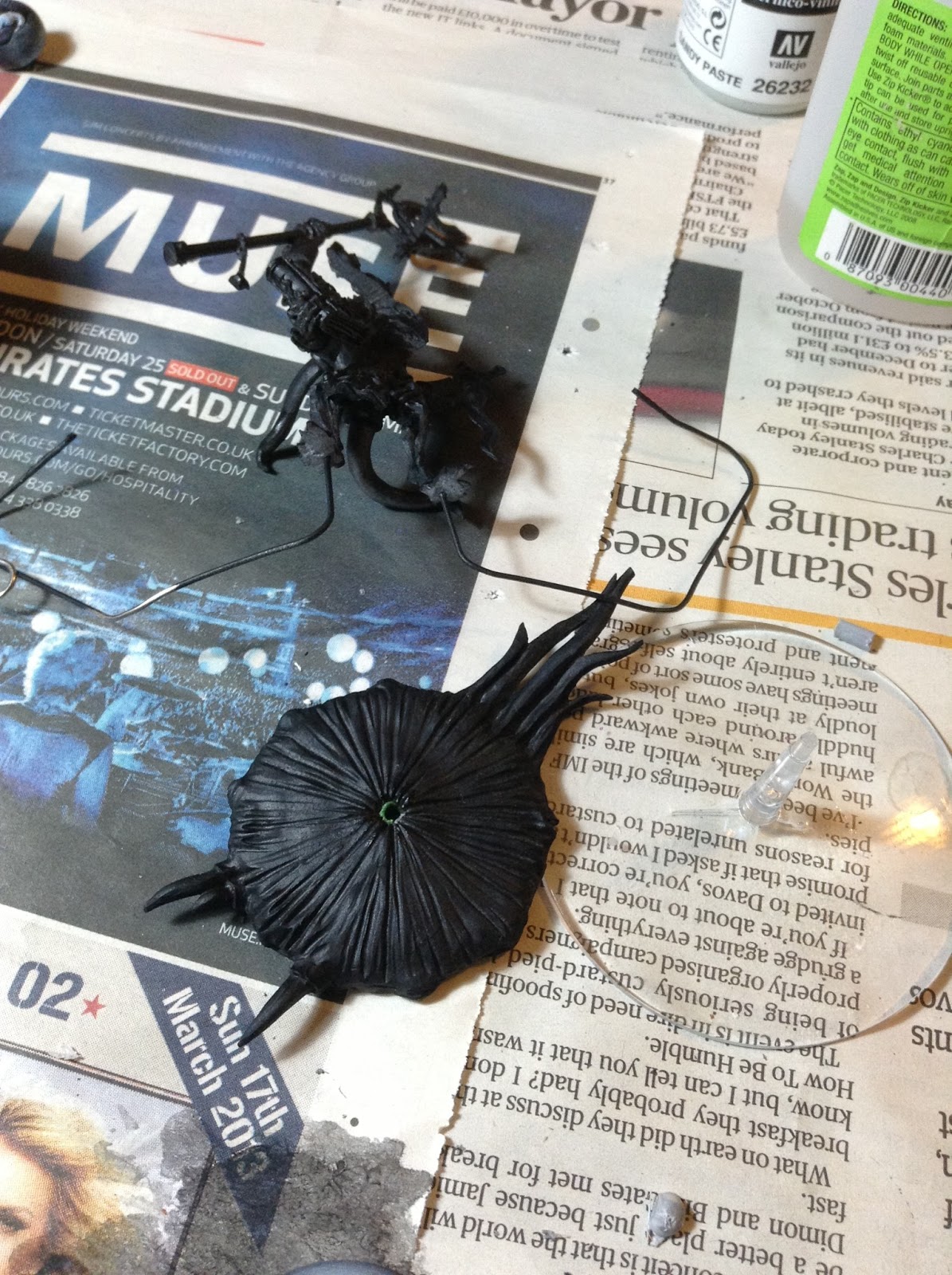 My friend's Herald of Tzeentch is now undercoated and ready for base coating. The plan is to try and paint it up in standard GW colours, using the techniques GW recommend. I also sorted the flying base - it was a bit loose where it is meant to enter the disk, so I used a small piece of green stuff to make it a tight (and straight) fit. A trick my wife taught me was to oil the flying base with light machine oil so the green stuff stuck to the model, and not to the flying base. Both will work, but this way looks much neater. 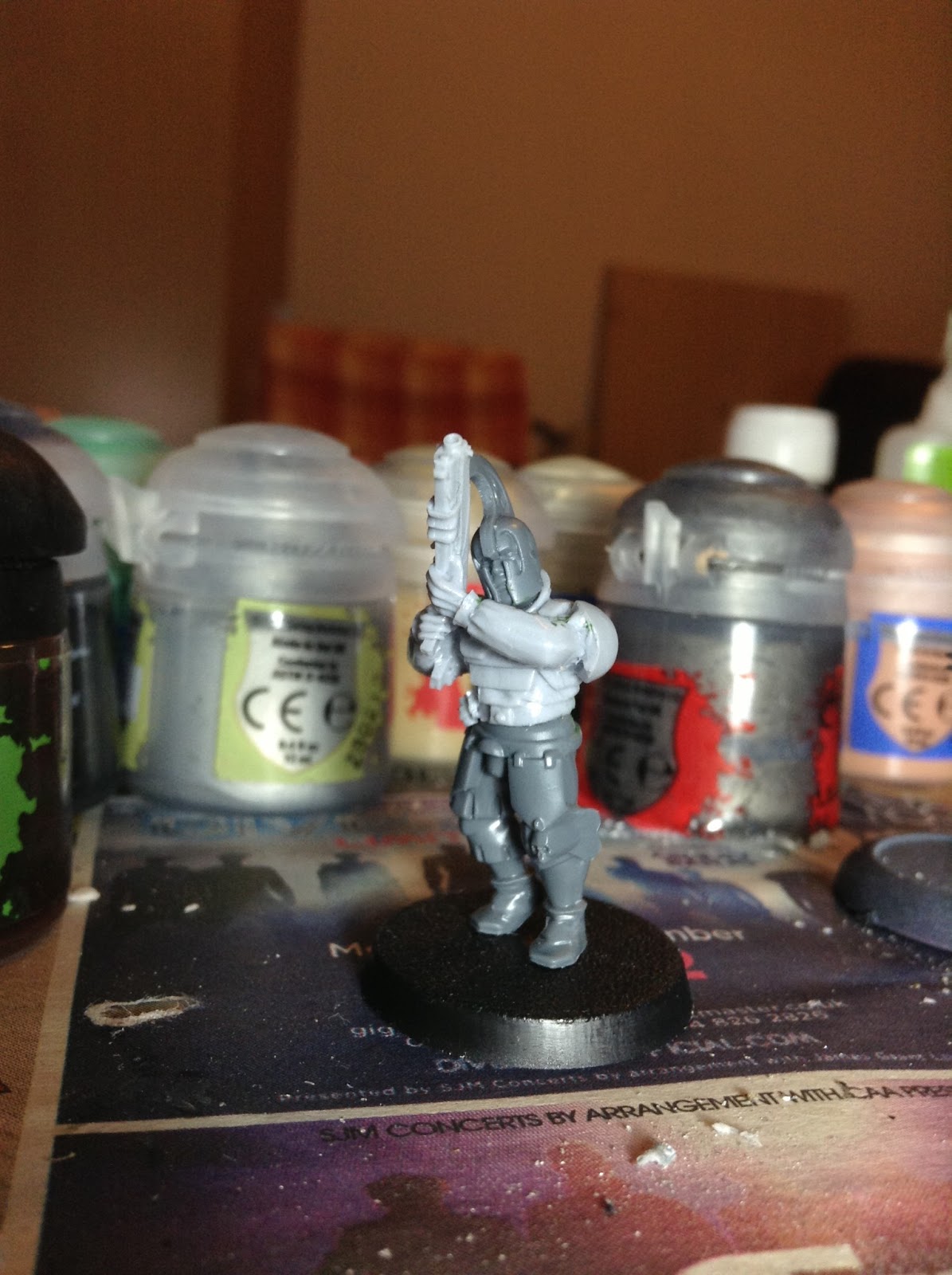 With some other blogs getting all nostalgic over Arbitrators, I decided to throw together my test kit bash Arbitrator as well. (You may remember a while ago, I wrote a few thoughts on how to represent Adeptus Arbites in 40K). This one uses Empire Greatsword legs, a Forge World Cadian Veteran body, and a Hellstrider of Slaanesh helmet (which is really the core of the conversion). This particular one only looks good from some angles not others, but I'm happy with the principle. I also need to see if I can acquire the body and arms of a Space Marine scout, as I have a suspicion they may be a viable and cheaper alternative.

I'm also putting him away again now - I'm trying to limit the number of projects I have 'on the go' at once now, and the Herald is my work in progress for non army related projects. 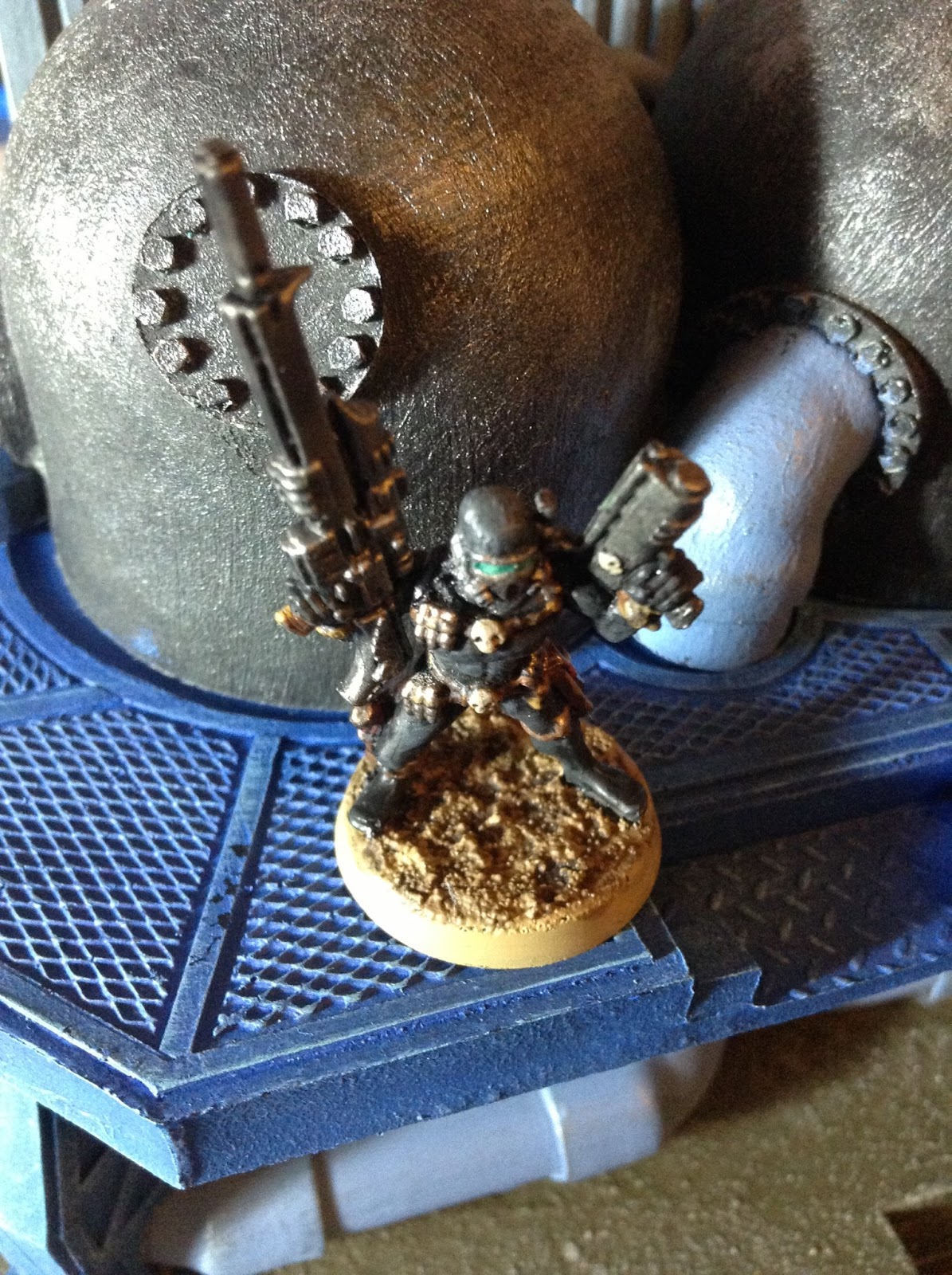 I've also finally finished the Vindicare assassin I've had pottering along in the background for goodness knows how long. Sadly, he won't see the battlefield outside of Apocalypse until I get myself a new Coteaz model and get him painted up - and I have several Grey Knight figures to paint and finish before I'm allowed to buy any new Grey Knight figures. I had better crack on! 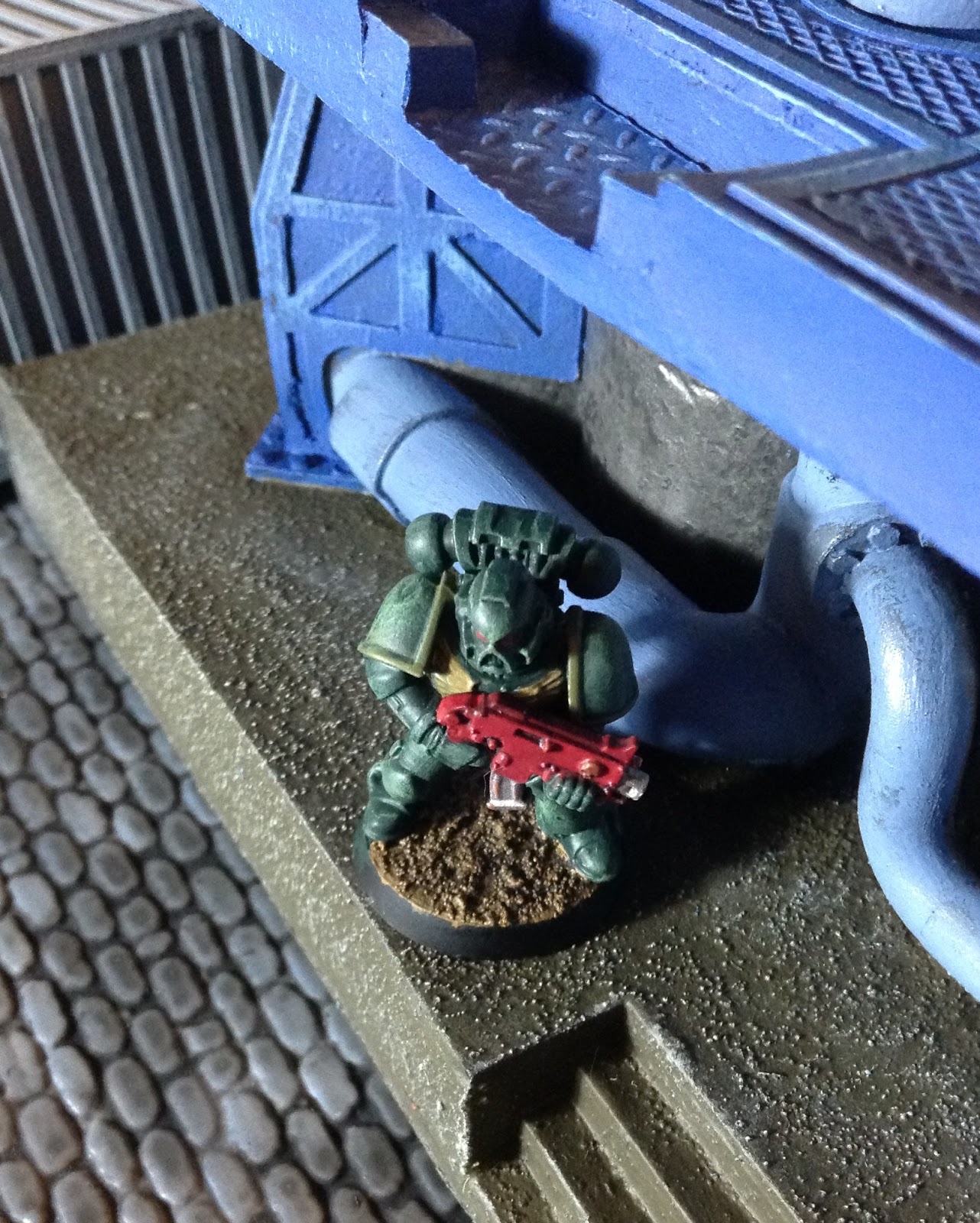 And I've also finished my test Dark Angel Marine. Sim is recommending I try out an oil wash technique on him, which, if we find the time to do it, I will undoubtably do some "before" and "after" shots of. In the meantime, I'm mostly happy with the colours I've used working well enough. The green base is Caliban Green, despite an early experiment with Castellan Green, it just didn't provide the colour I wanted. He was then dry brushed with Sybarite Green.

The shoulder pads were edged in another green I now can't find the paint pot of, and the eagle coloured in Zandril Dust, followed by a Screaming Skull drybrush and a sepia wash. The boltgun was originally base coated in Jokaero Orange, but it really didn't work, so Wazdakka Red and a mix of black and red washes brought it back down to a tone I liked.

Sim doesn't particularly like the over-heavy drybrush I tried out on the green, but I do kind of like it, especially on the helmet. I'll have to make a decision when I finally crack out the Dark Vengeance set.