Projects around the house

Things have been super busy recently, and that means a lot of projects have just been being lying around the house, or waiting to be picked up again. I decided to take a few shots of the state of the house to give my loyal readers an idea of what I'm working on. 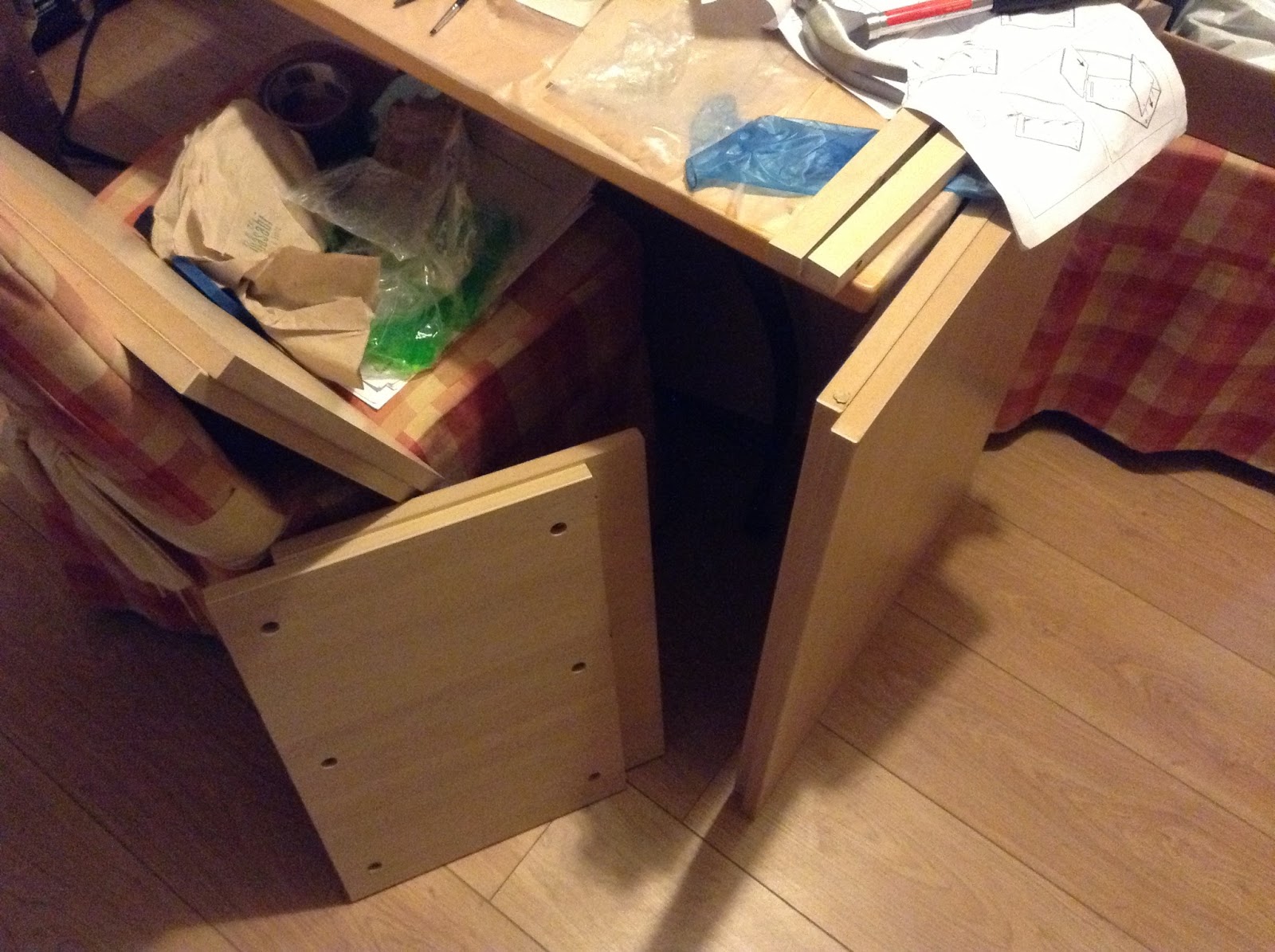 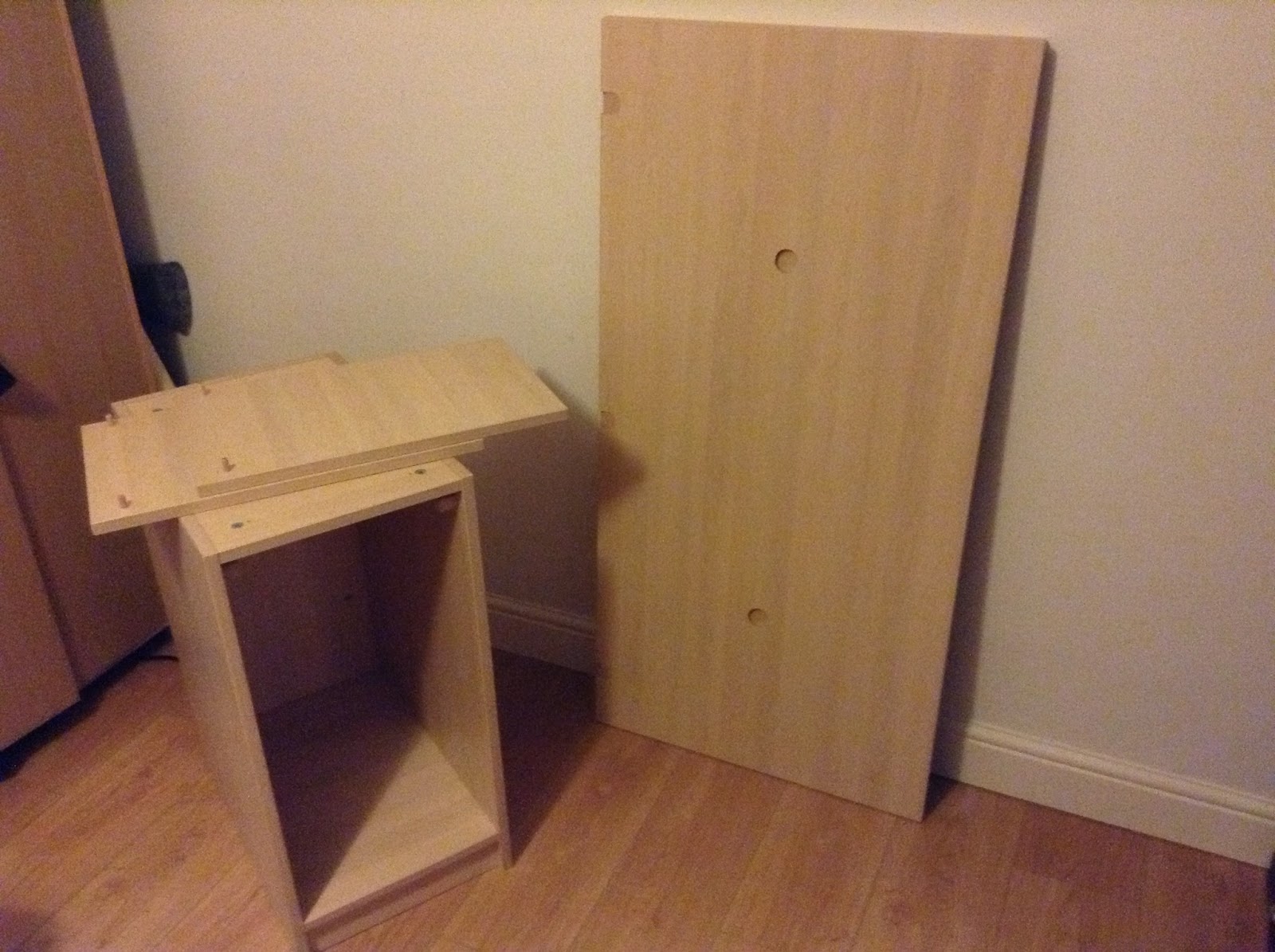 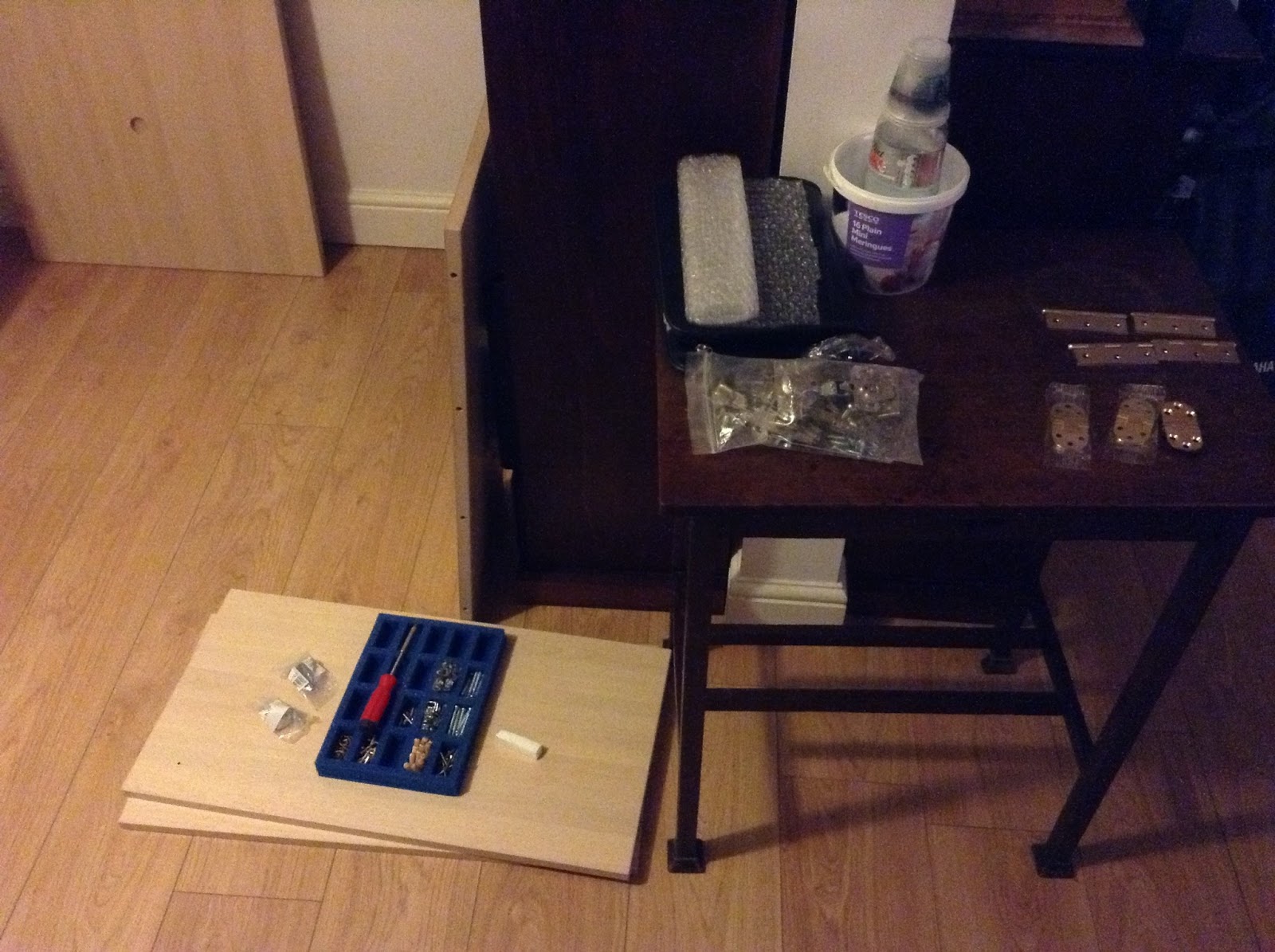 The lounge room is covered in half assembled furniture. This is not actually mine, but Sim's. This is the new KR "WarDesk" which she pre-ordered at Salute. It's the desk that folds out into a 4 x 4 gaming table. Once it's up and finished, expect a celebratory post from me! 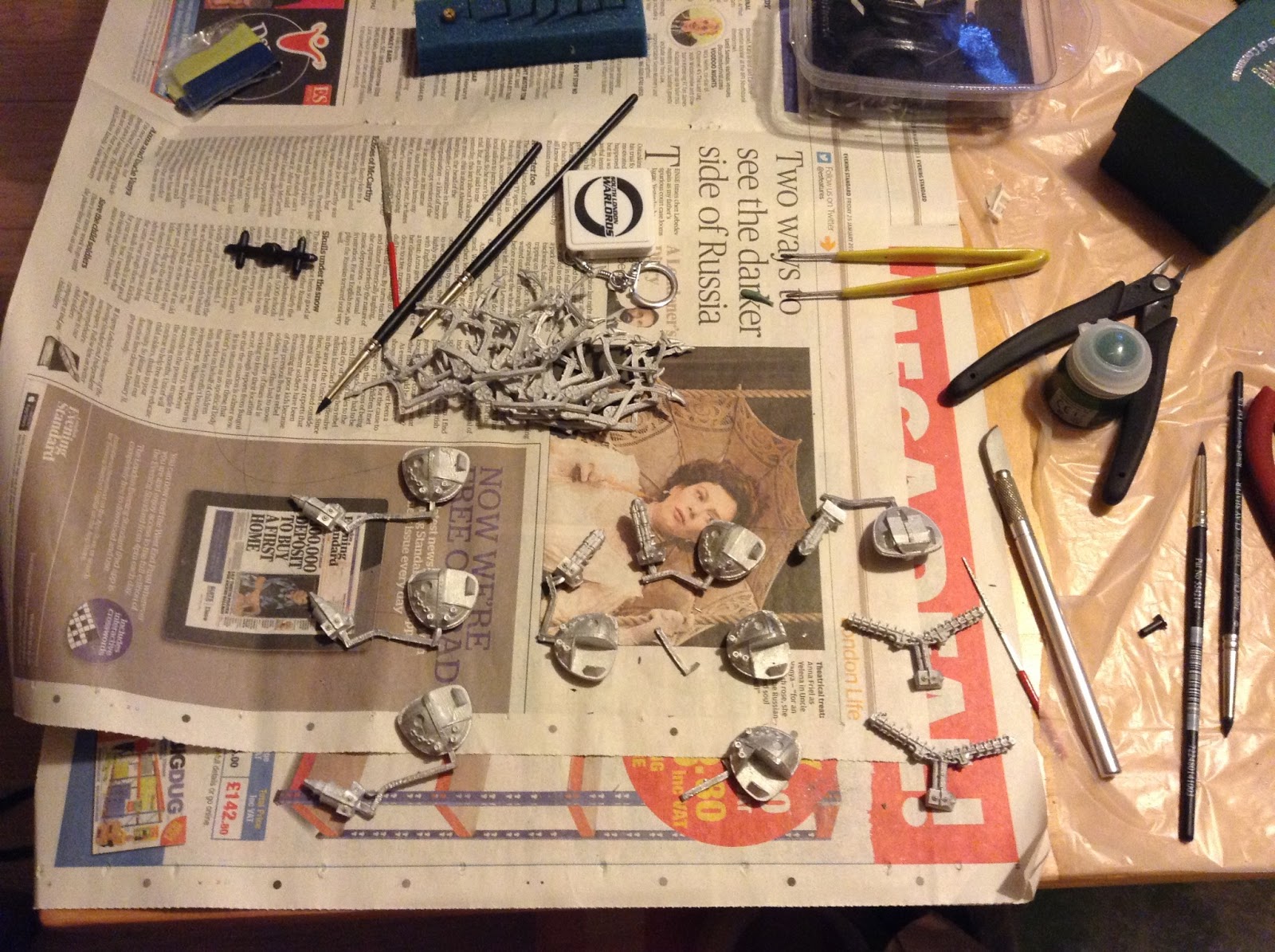 More of Sim's projects! These are Martian walkers from Timeline 300. They unfortunately had a few casting issues with these ones, but when Troublemaker Games heard about it, they were very quick to arrange to send us some replacements. Sim is planning on turning the mis-casts into some terrain with wrecked walkers in. All credit to Troublemaker - every manufacturing company will have a glitch or issue somewhere along the line - what marks out the good companies are the ones who fix it. 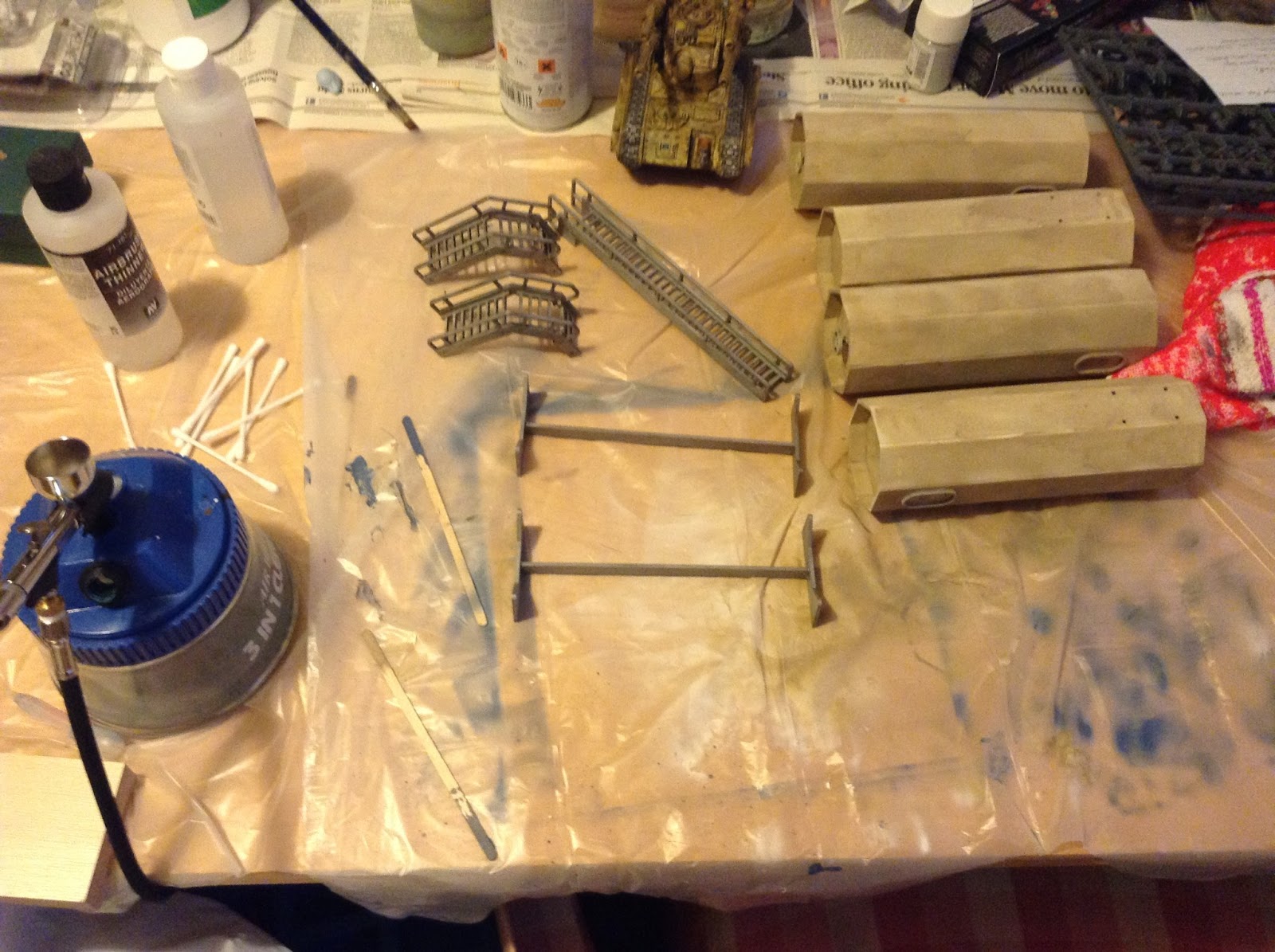 The first of my projects: Sarissa Silos, with me learning how to airbrush. I'm doing these up as a kind of concrete colour, with rusted metal. At the moment, they're just base coated, but I'm hoping to add in some simple airbrush highlights on the concrete, shade the metal a little, then try out a few weathering techniques on the metal to finish. 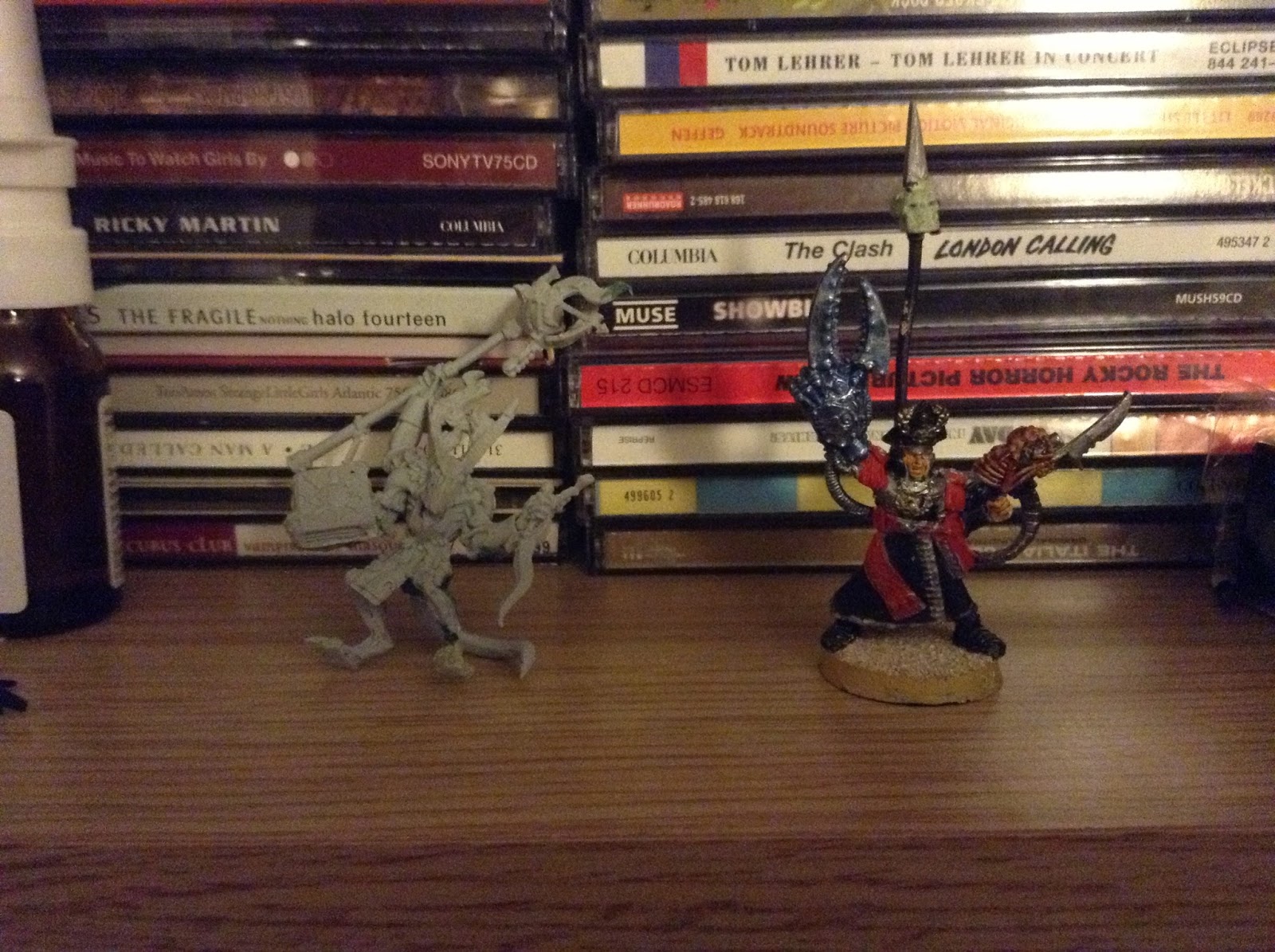 On the CD shelf, we have a certain Herald of Tzeentch who mocks me at every turn with my slow progress on him. 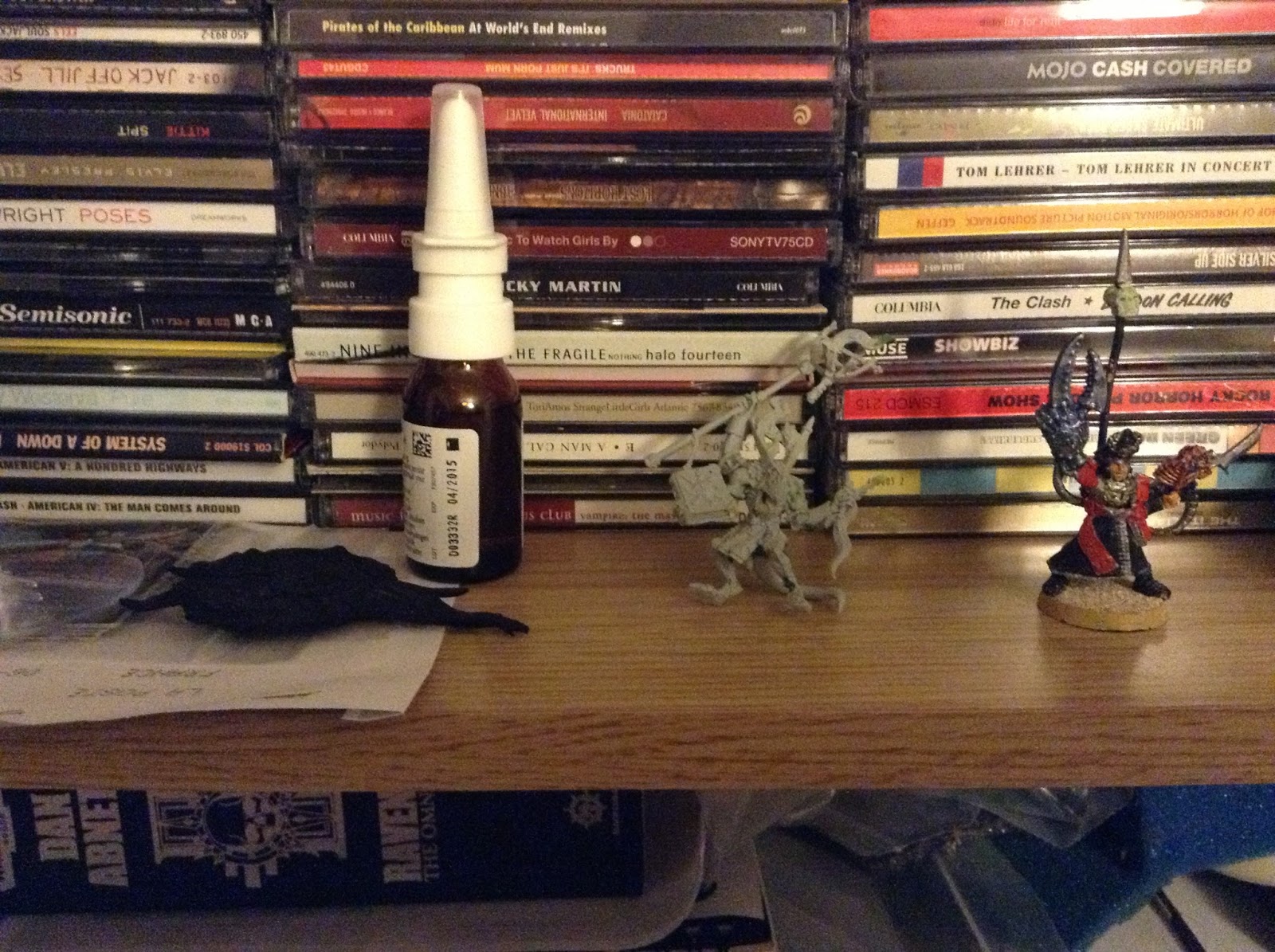 ... and the wider shot, showing I haven't lost his disc (which is actually undercoated) or his flight stand. 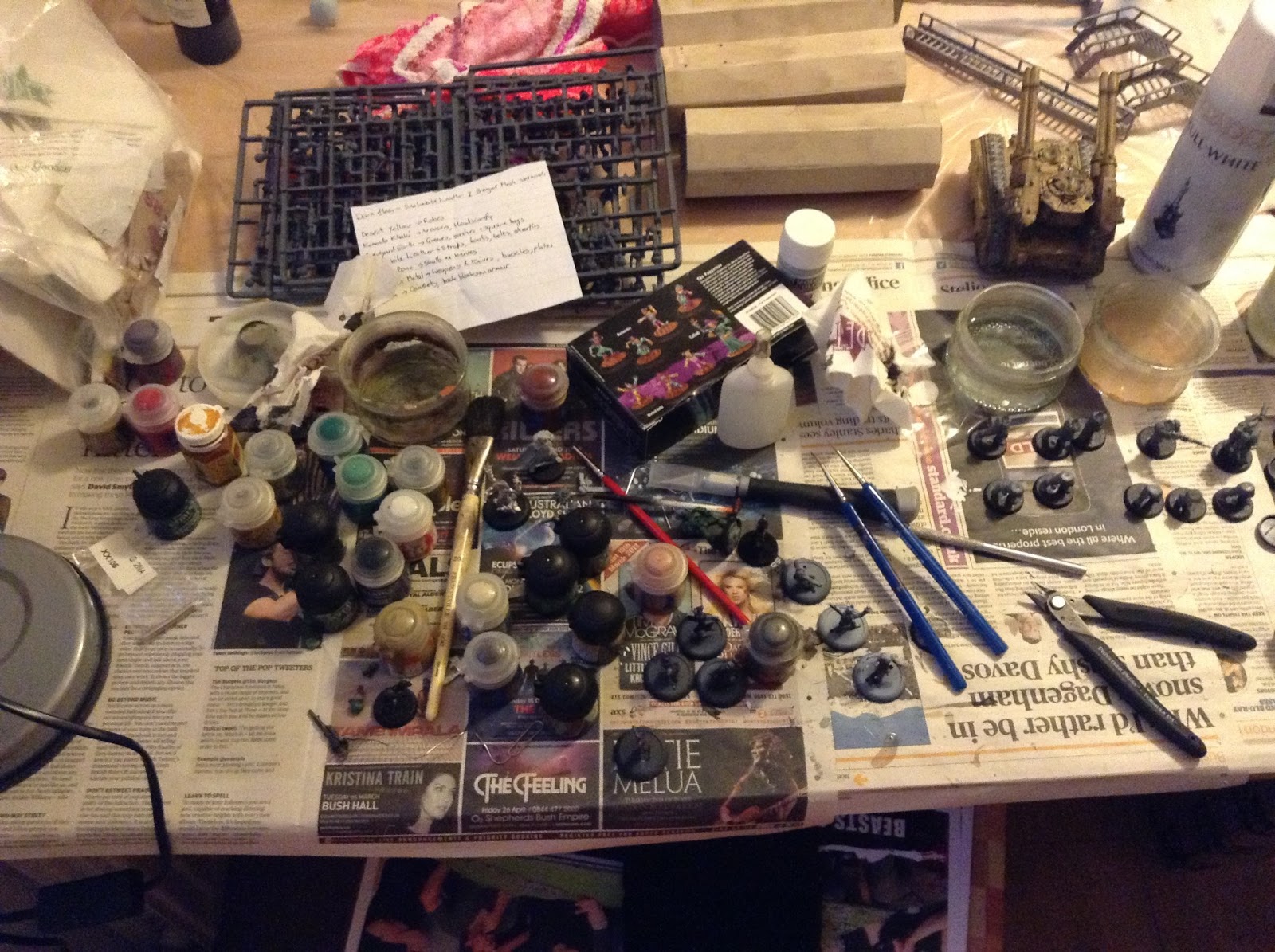 My god, it's full of projects. Also, this is a mess. I really need to sort this out. I mean, the Hydra is a finished model I dropped into a space when I was swapping tanks around in my carry cases to get out to a game. That's just sloppy. 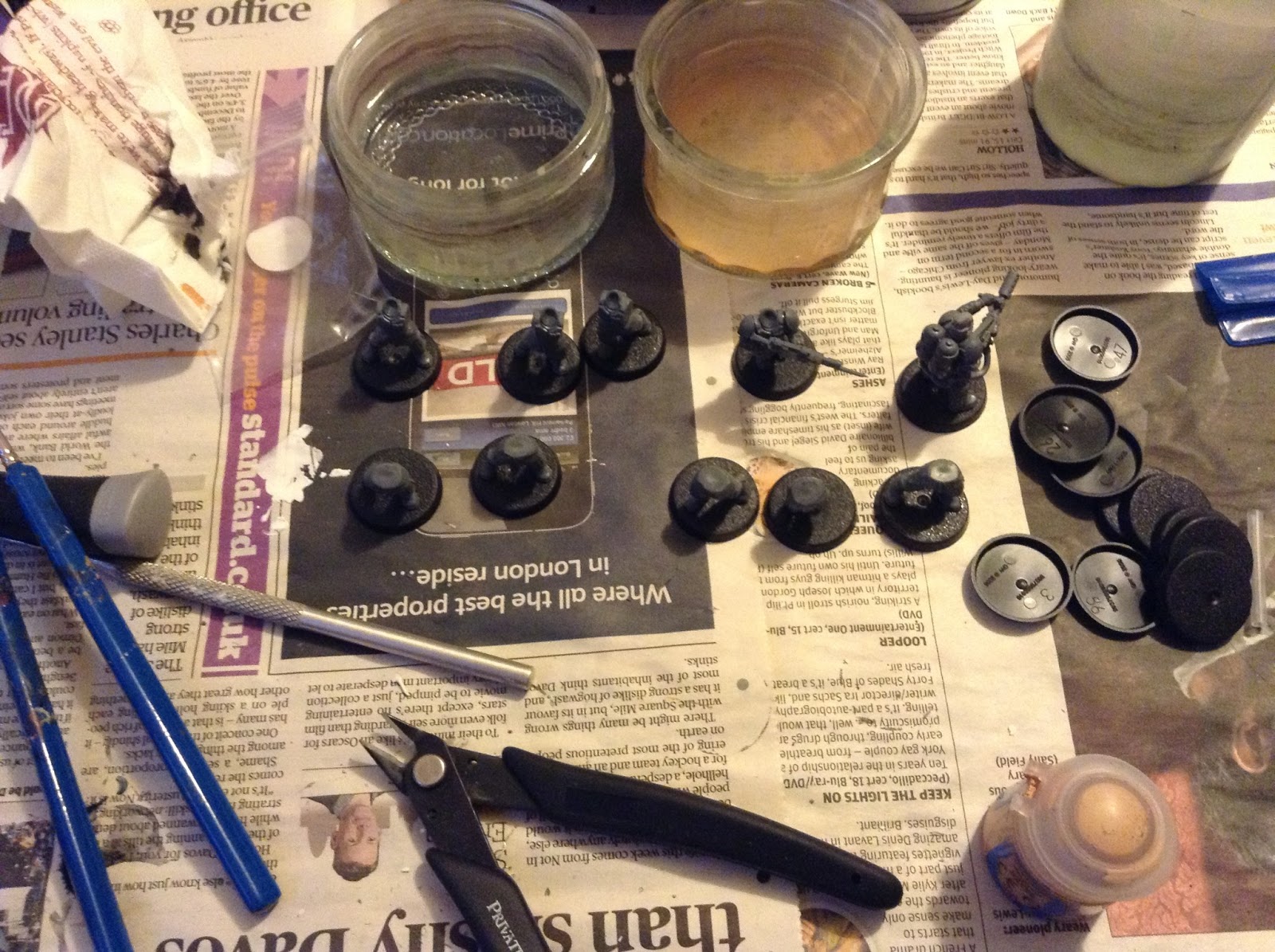 Guardsmen! One is as far as having a head, although his neck will need some Green Stuff work. These are going to be another 20 infantrymen when I'm done, lightly armed with just a flamer for each squad to discourage assaults. My Guard army is seriously lacking in troops choices, so I hope they'll provide me with some more tactical flexibility. 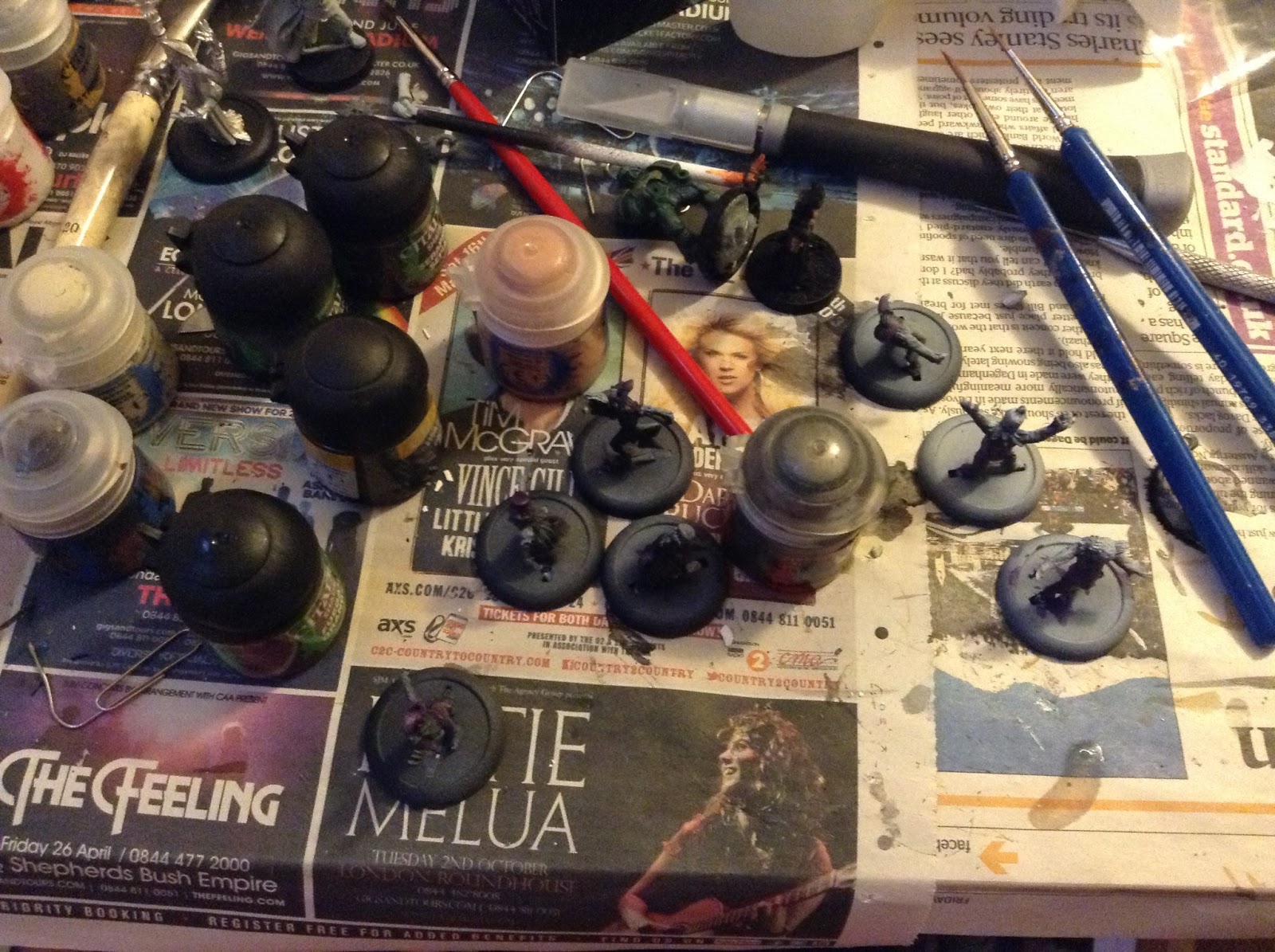 This is the worst of it. My Malifaux crew is all over the place. Collodi needs an undercoat, the others need me to get back into painting. A test figure for a Dark Angels colour scheme lies forlornly on his side, discarded and forgotten. 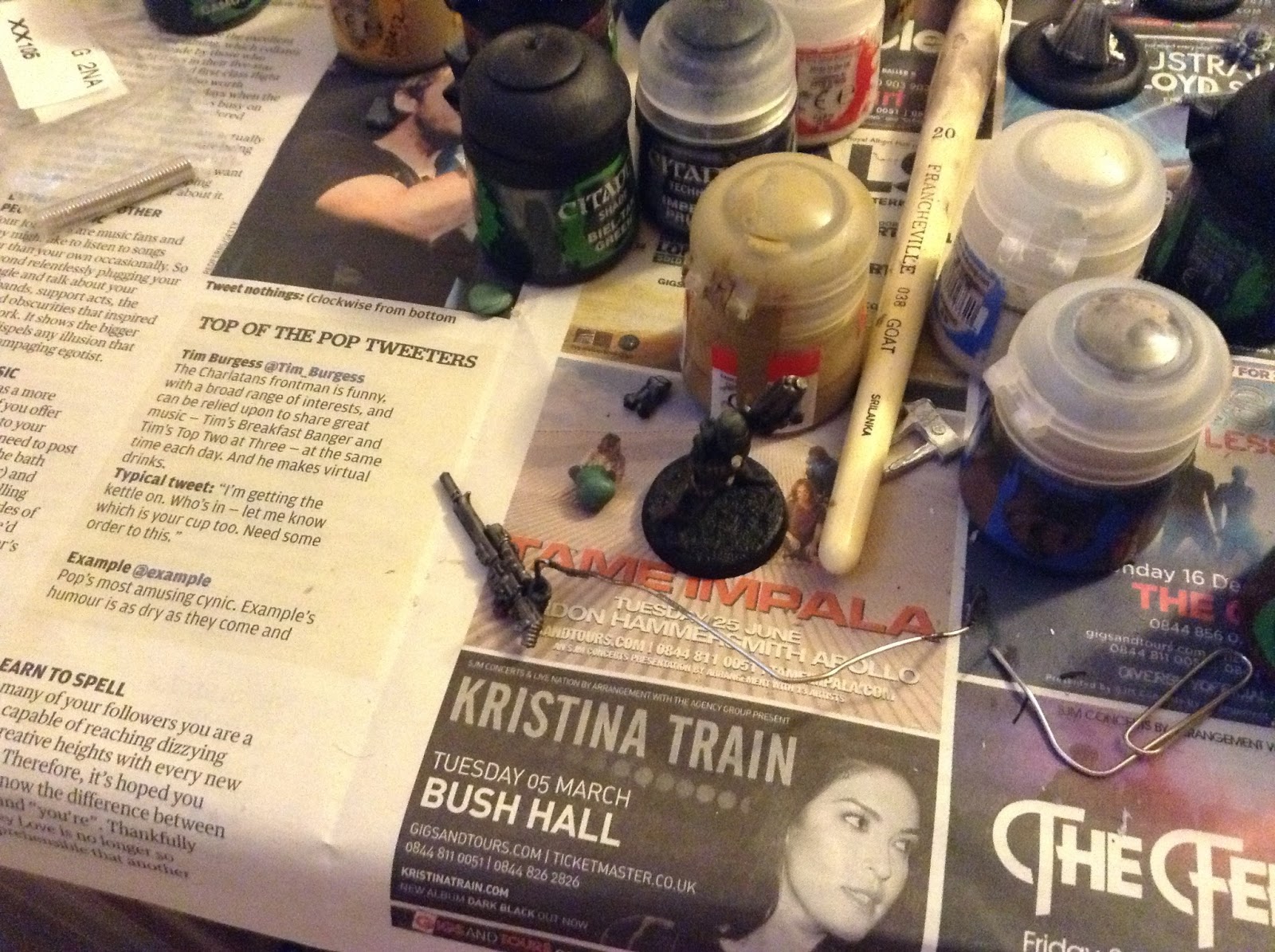 Vindicare sniper, on the verge of completion. I use paper clips for my pinning wire, and leave arms attached while I paint before trimming it down for the actual assembly. 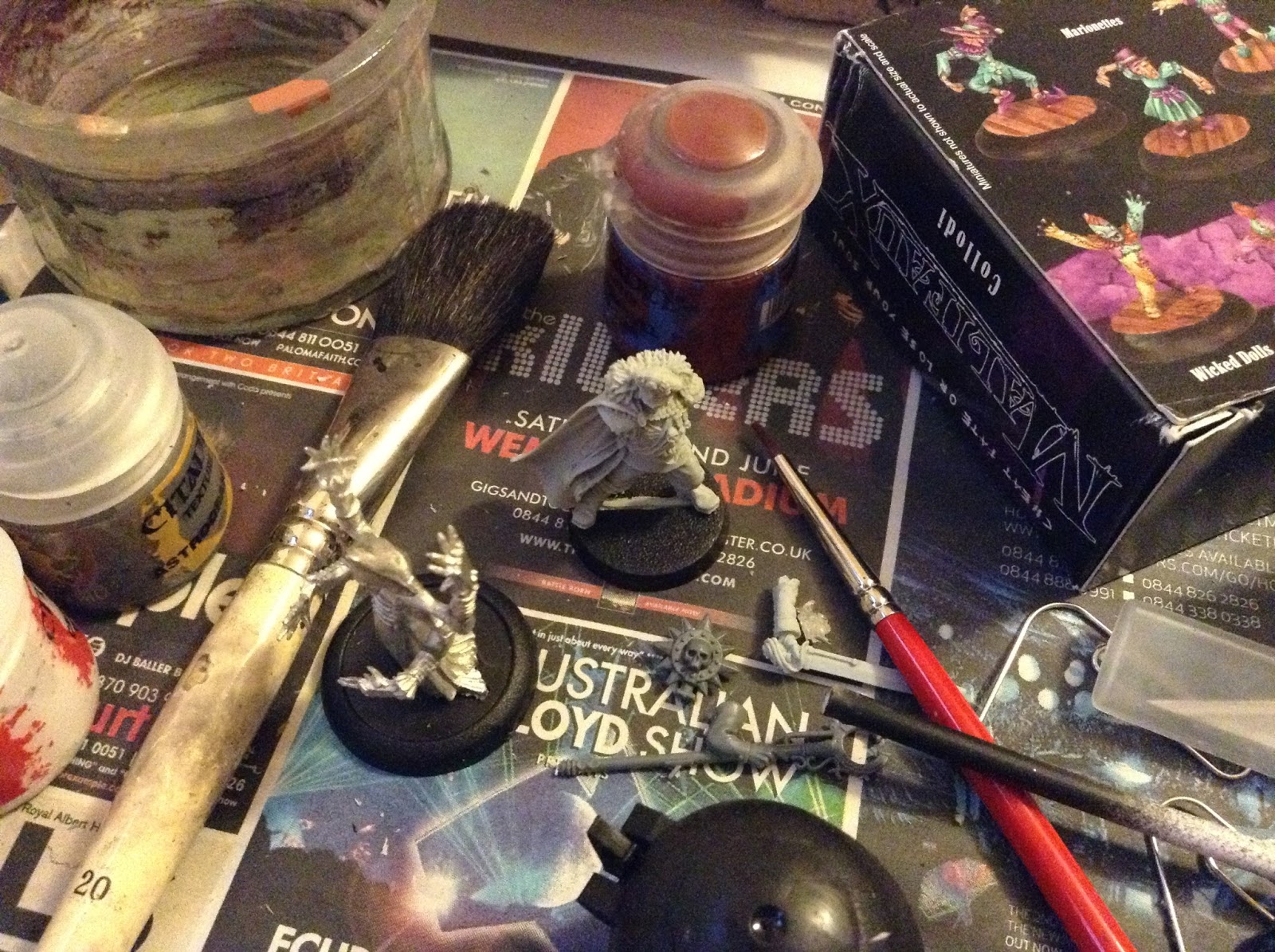 And here's a Lord Commissar I got out to consider for a bit of a kit bash. I managed to lose his right arm and bolt pistol through idiocy and untidiness, so I've been looking for an alternative right arm. He's pretty much prepped for painting short of undercoating. My local gaming store is talking about a little 40K painting competition, so I'm holding off on starting anything with him until then. Really, I need to find a little bag for him and put him away until then. 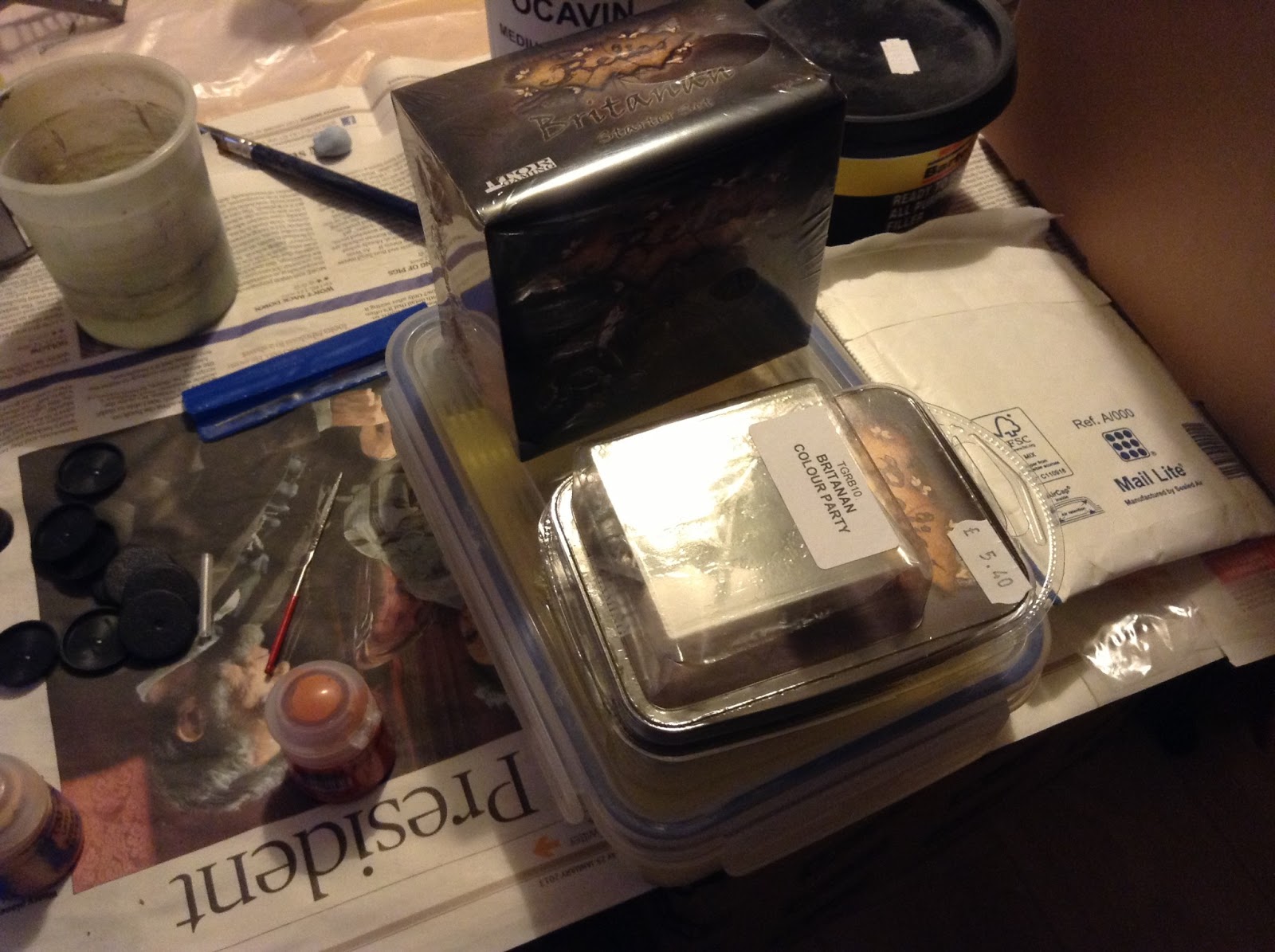 Relics models resting on top of my wet palette. Also, a jiffy bag from my last Bitzbox order. Again, pure untidiness that I need to fix. 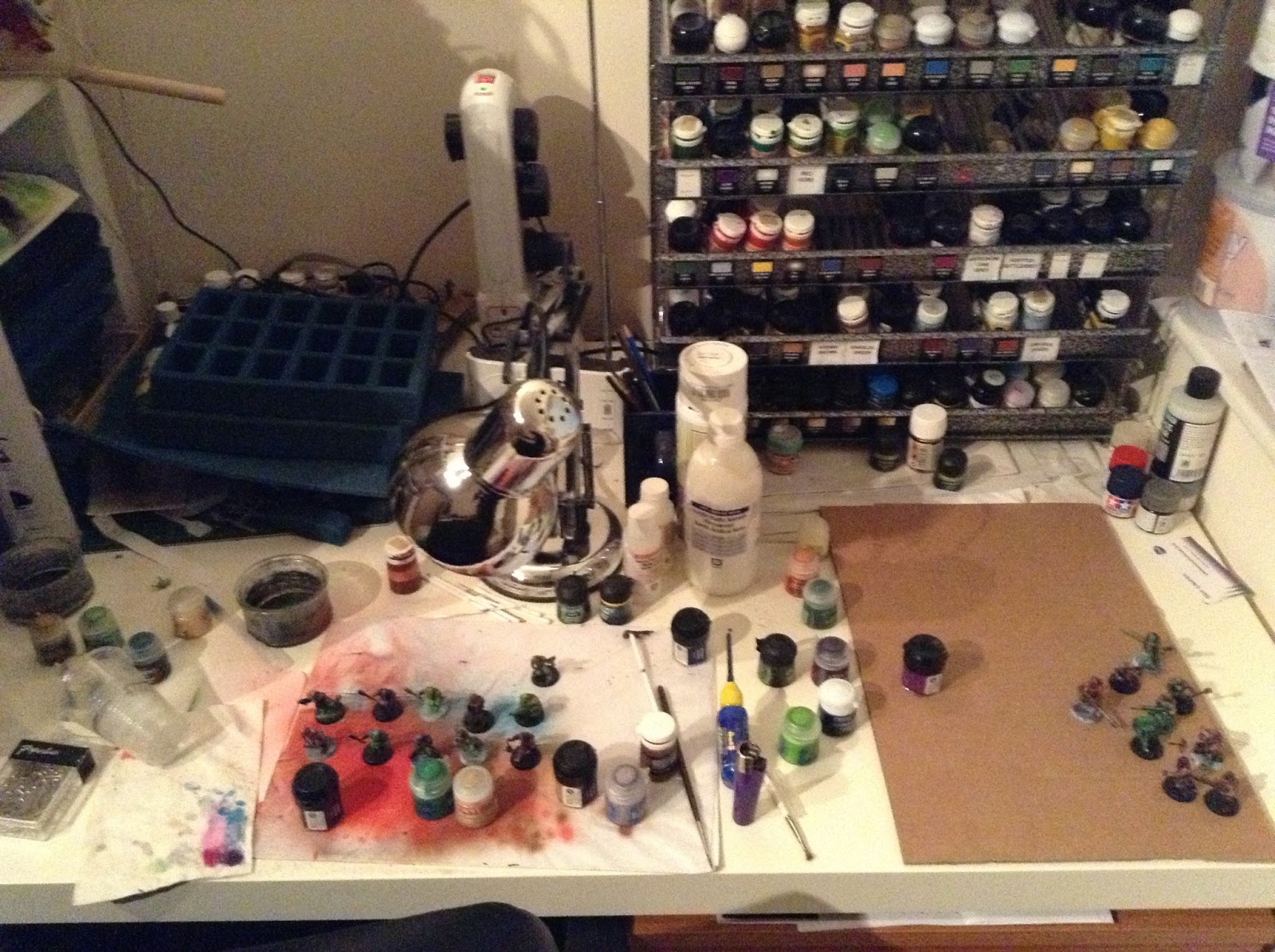 My wife's painting desk is much more restrained and sensible. She just has one project out. 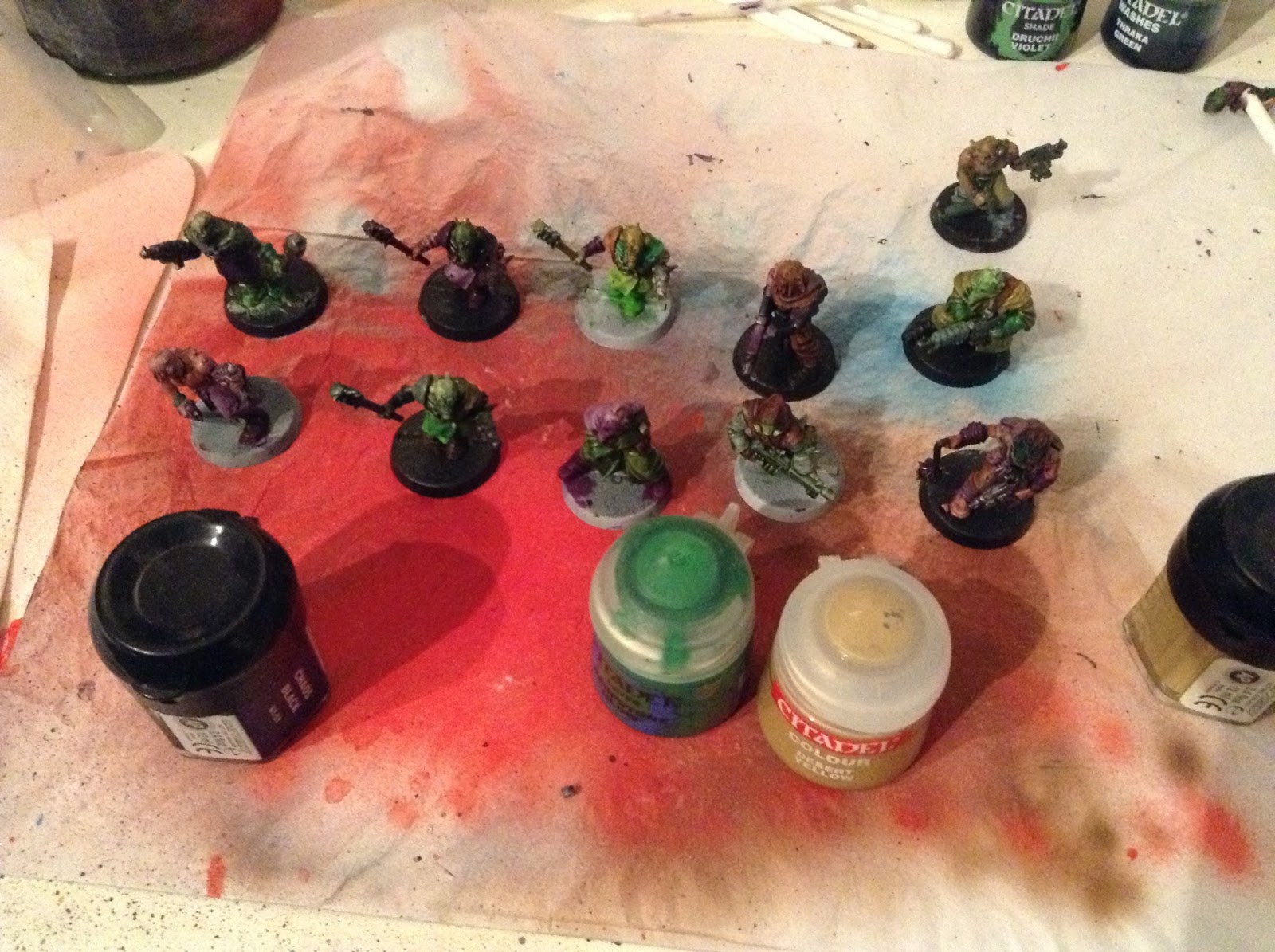 Here's the work in progress. 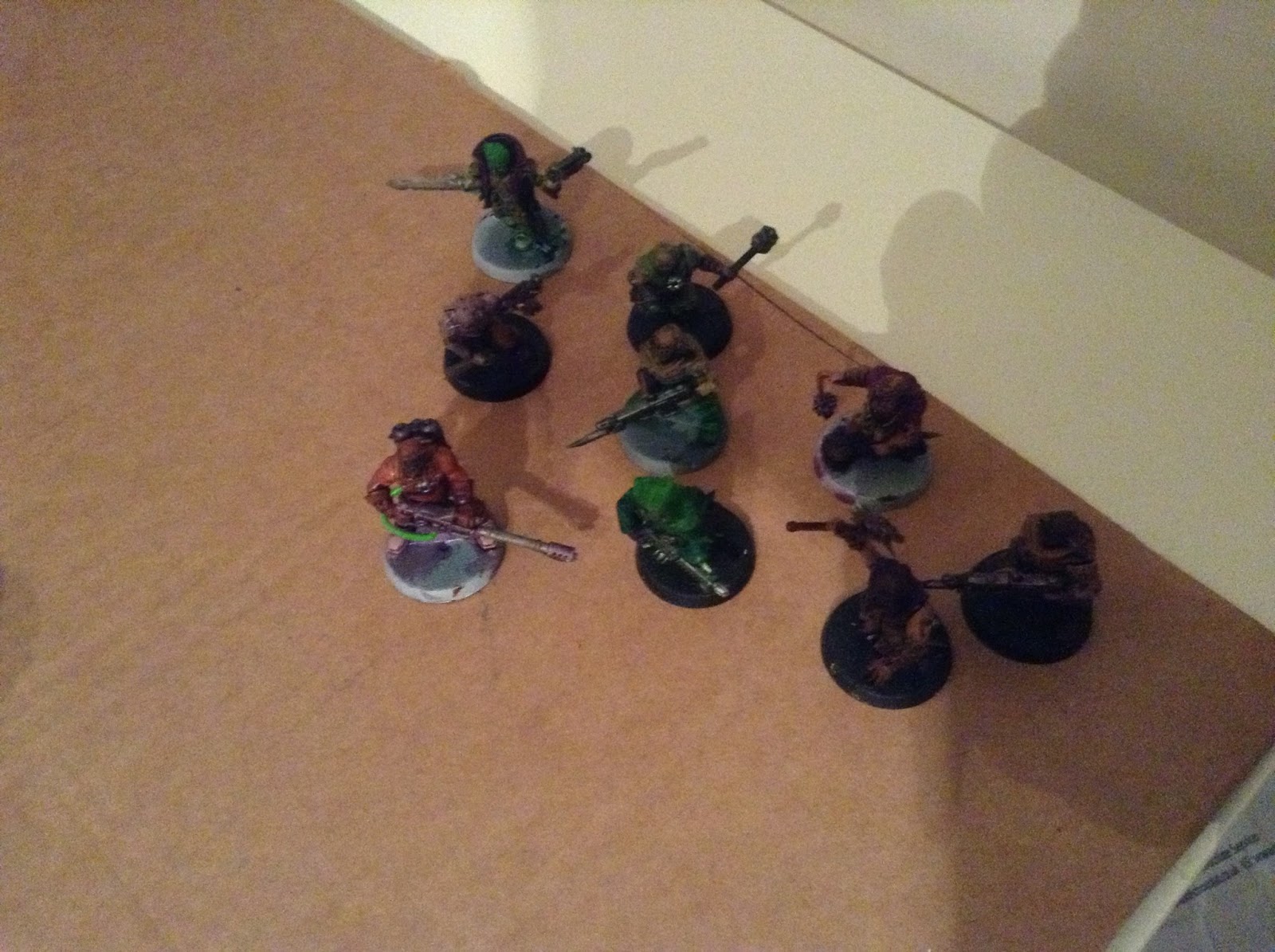 And here are the finished ones, waiting for their co-conspirators to join them.

I took all these photos before the start of the weekend, so I could have a nice visual representation of what I managed to get done by the end of it. Soon to come - how did I do with getting back on track?
Posted by The Responsible One at 19:00