So, Grumpy Old Wargamers was awesome...

As some of you may have seen from my brief and unanswered post on Friday I went to Grumpy Old Wargamers Con last Saturday. I am incredibly glad I went because it was excellent. I enjoyed myself hugely.

Sim and I got up early and travelled to Tabletop Nation. In quite possibly a lifetime first, I had planned excellently and we turned up a little early with no problems or drama on the way. Tabletop Nation is hidden away in a warehouse in an industrial estate in Hockley, Essex.

They are quite clearly not finished yet - there are areas still under construction, and you can see where there are gaps off to the rest of the unit. This isn't a terrible thing. The space is clean and is at a reasonable temperature. There is a licensed bar which also serves some burgers and hot dogs, with a meal deal making the prices reasonable.

We had to wait a little while before the place opened, but eventually we were all told we should have wandered in at 10...

I had finally finished my Inquisitorial Scribe, and entered him into the painting competition. Sim had taken some photos with the Camera of Truth (and Shame) the night before to help me spot the last few bits and pieces that needed fixing. 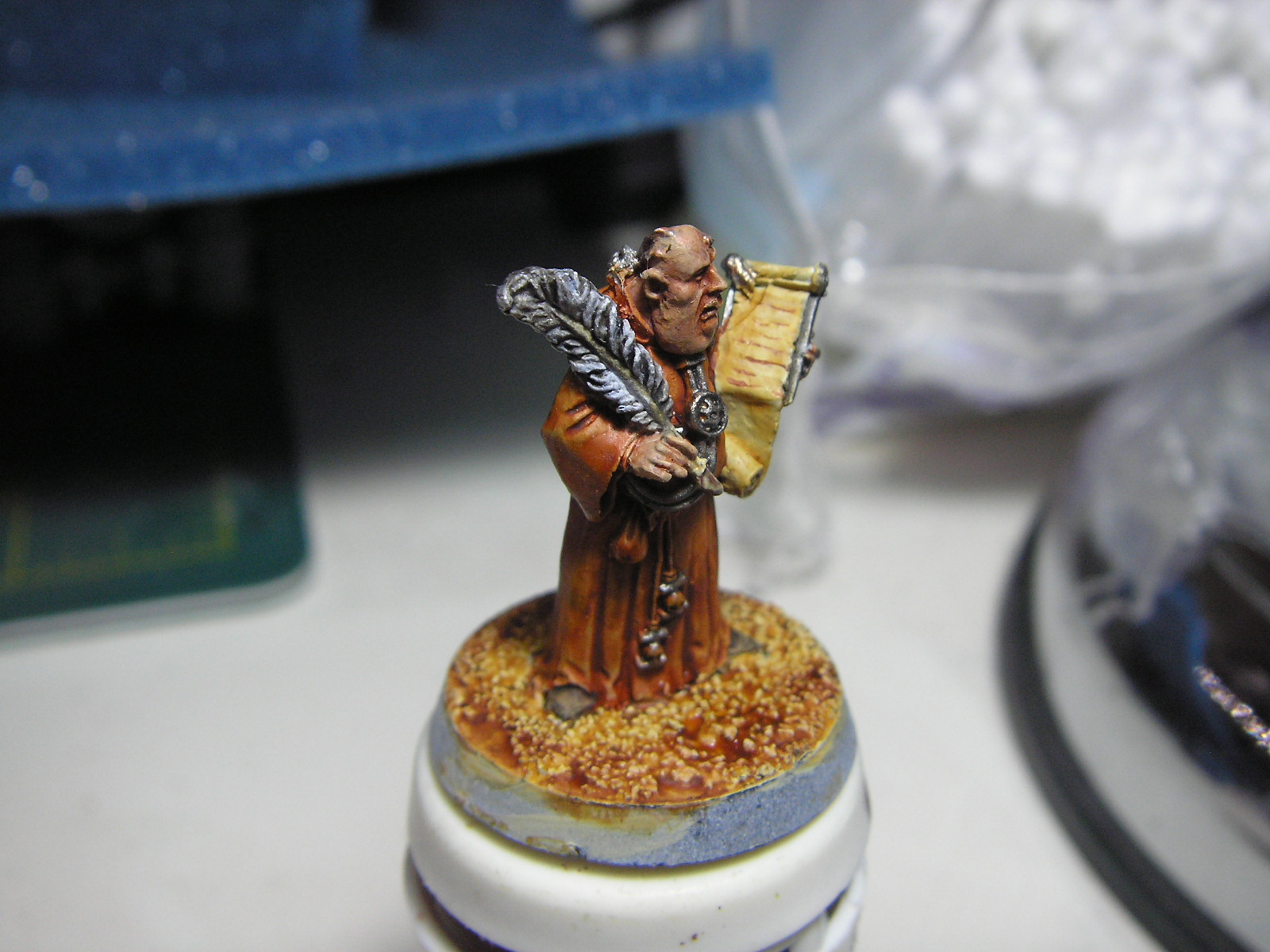 If you have seen the pictures from the event, you'll know I didn't win. However, I was very pleased that I felt that the model belonged on the entry table. I did feel he was better that at least some of the other entries in his class, although that is obviously a matter of opinion.

The Con was organised by TemplarsCrusade01. It was the first year it had happened, and he definitely had ideas for making it an annual event. I look forward to seeing what he does with it.

We spent a lot of time talking to the various different Youtube painters. Sim gravitated there pretty quickly, and I do perhaps regret not abandoning her a little more to scout out the rest of the place. 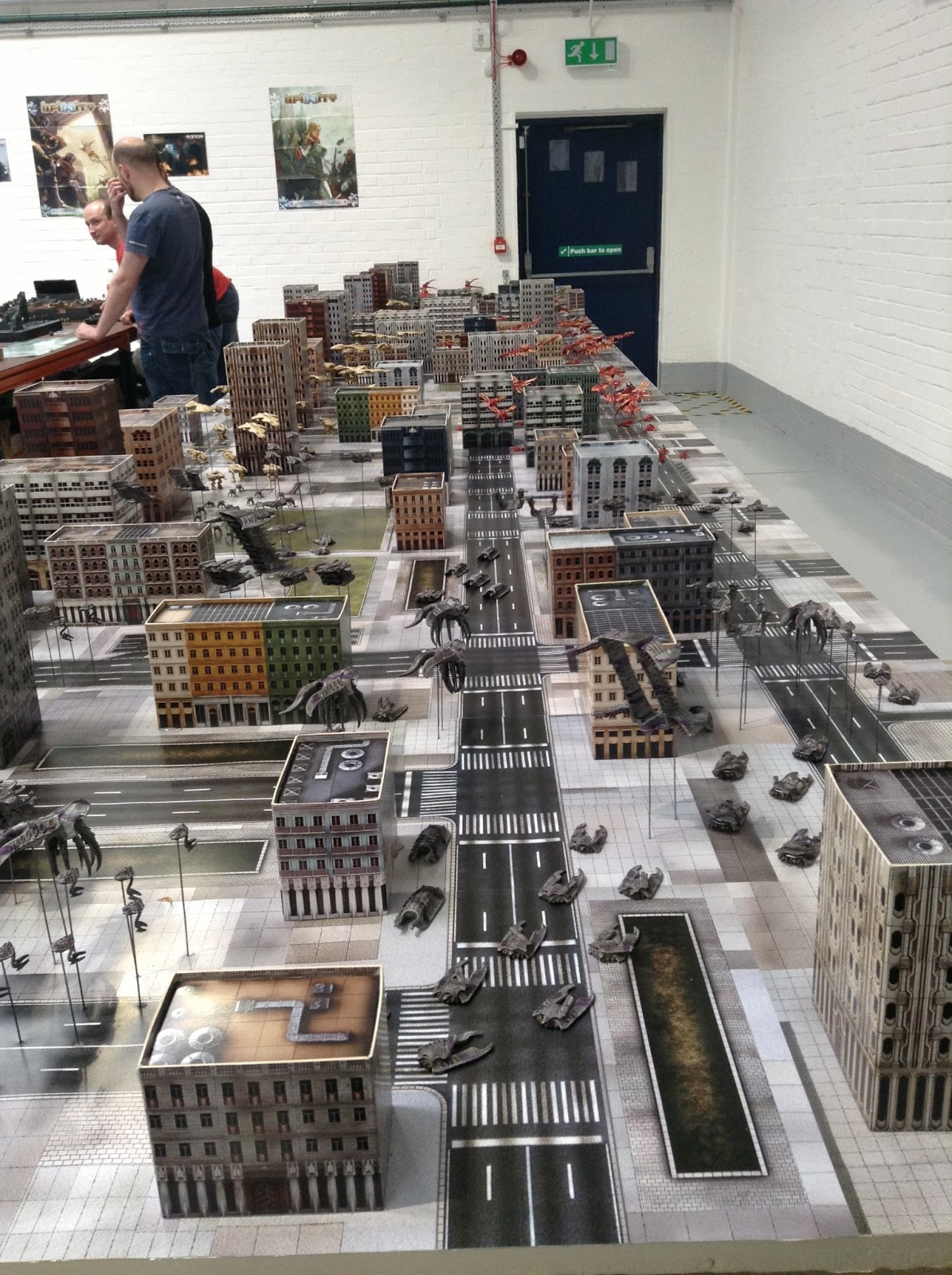 There was plenty of eye candy about - this was a massive Dropzone Commander display board. Their pirate display board was also incredible, but I didn't remember to take pictures... 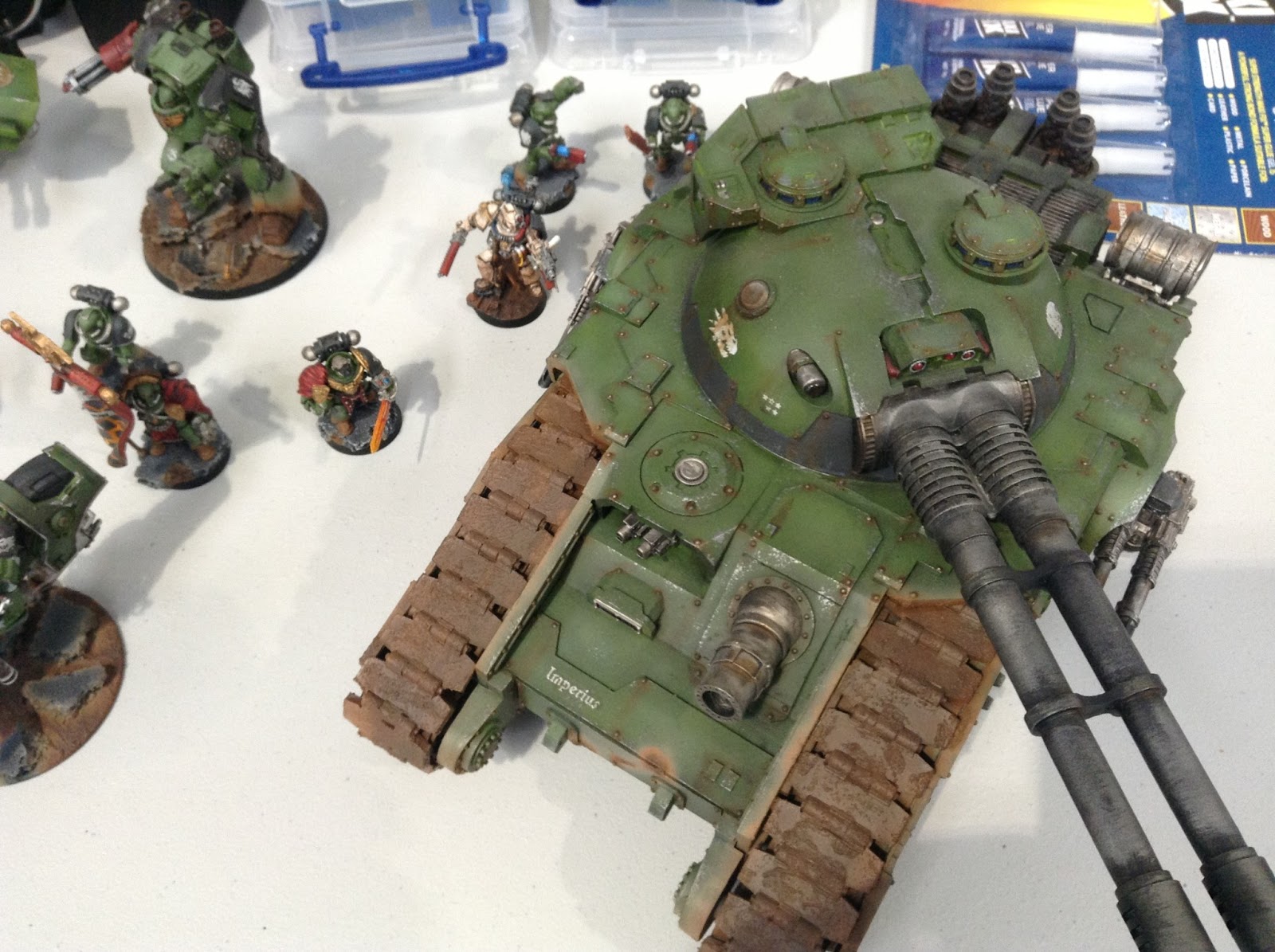 This is beautiful Fellblade by Chuffy. Sim spent a bunch of time chatting to him and his other half, and they were both lovely. 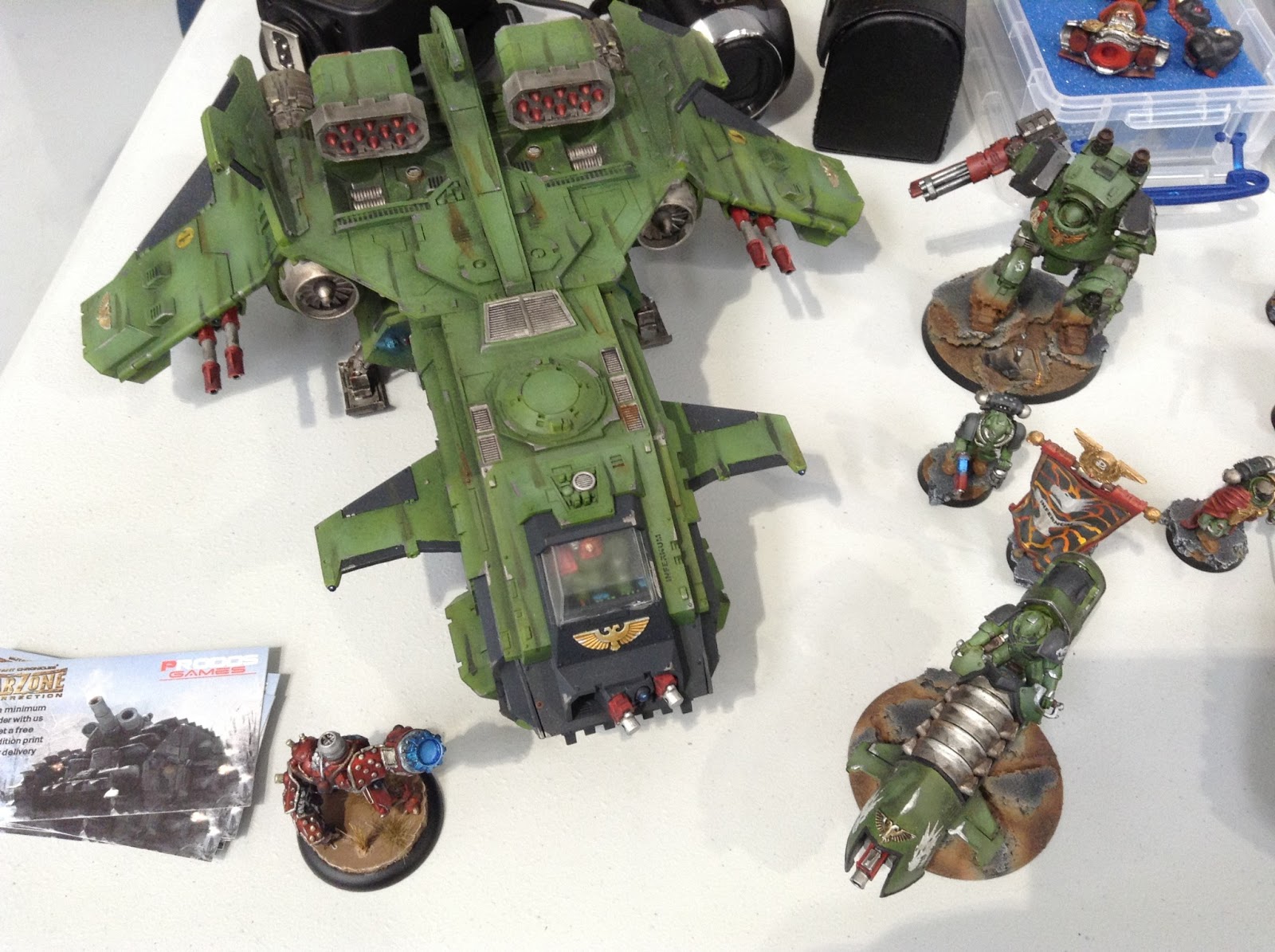 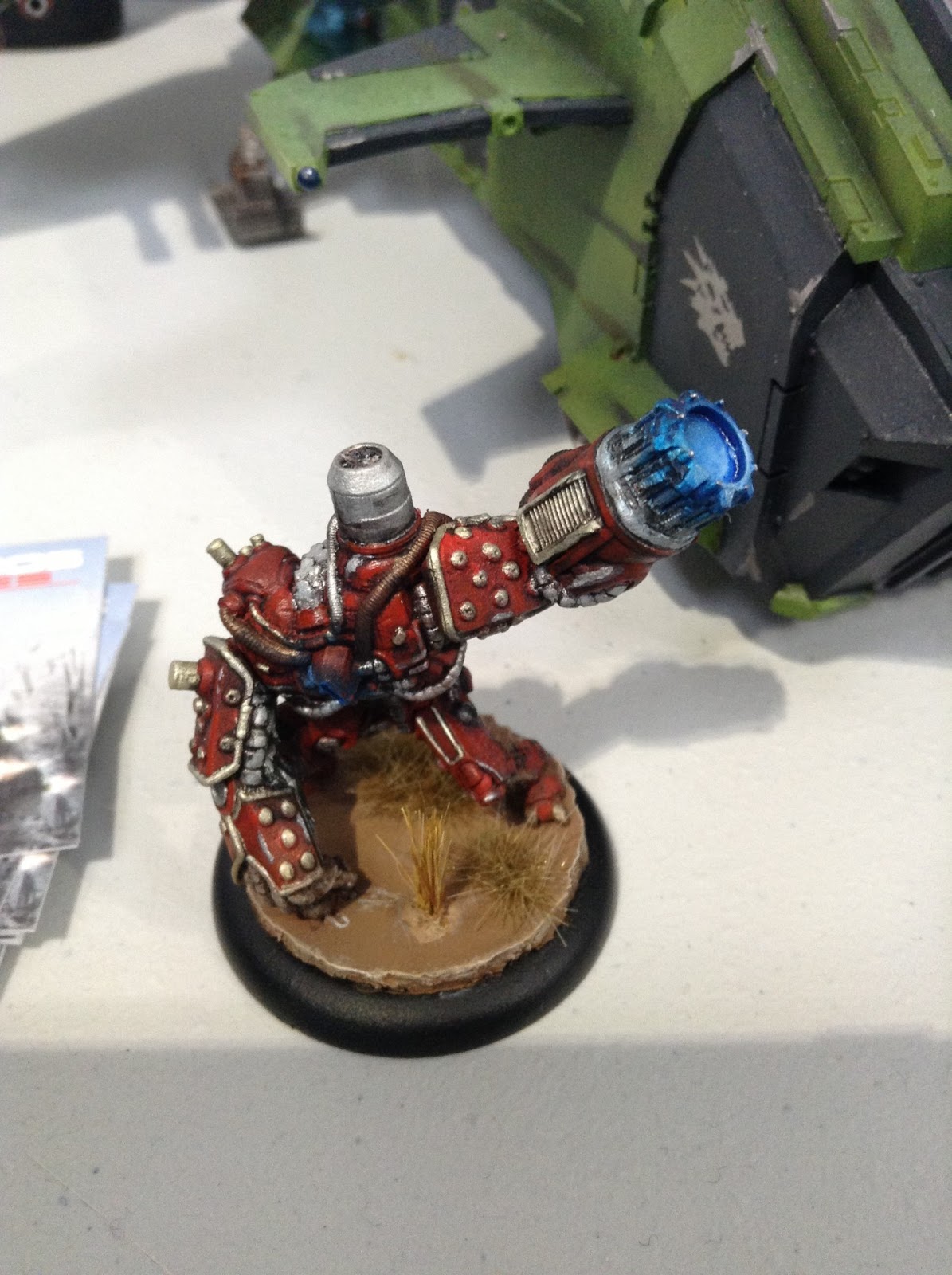 This is the model from Warzone Resurrection - fortunately, they've just finished a Kickstarter and they don't have models on sale just yet - which saved me trying to pick it up... 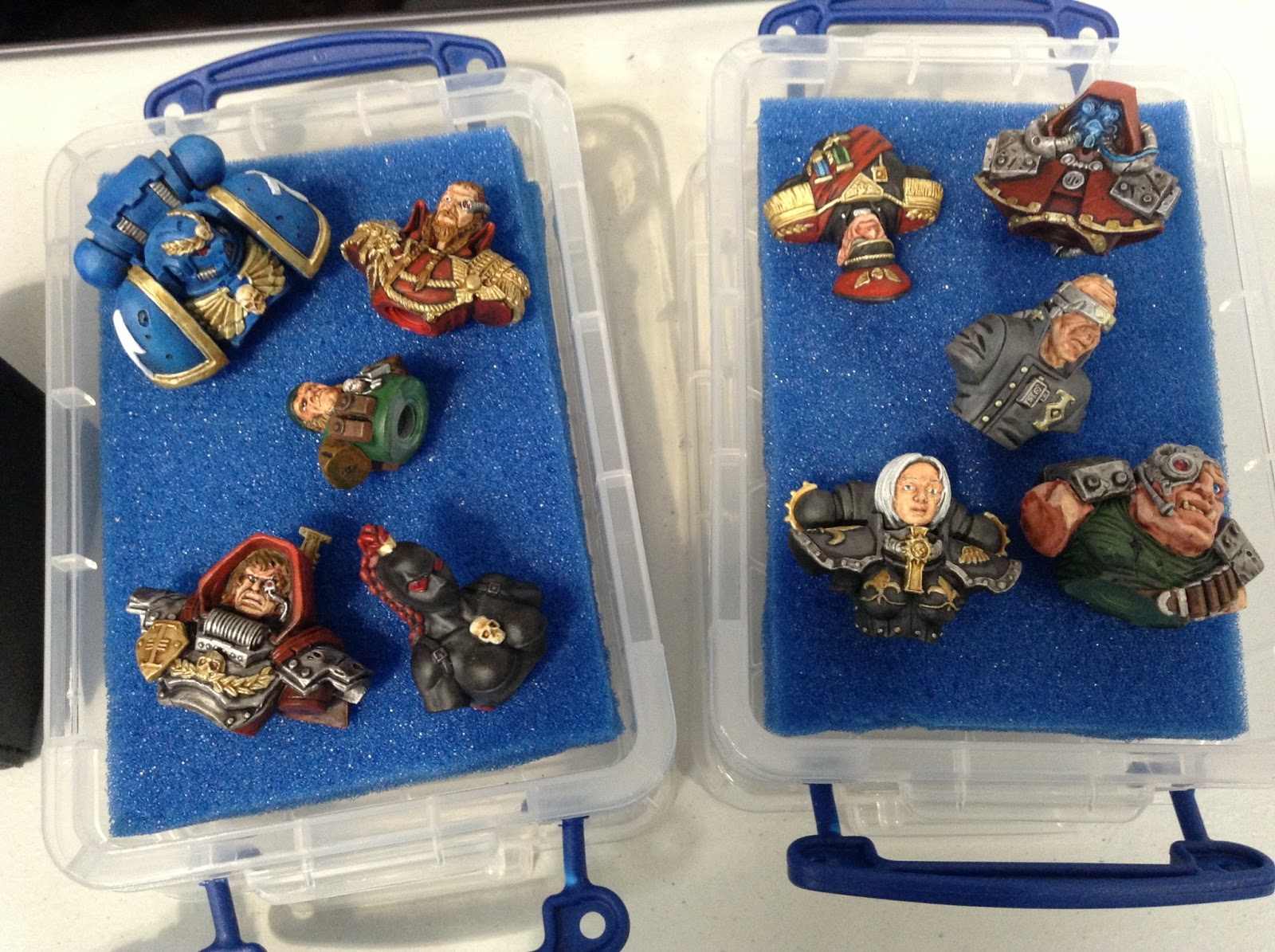 And finally from what Chuffy had on display, these are the busts from the new Relic game from Fantasy Flight. Definitely one I want to pick up! 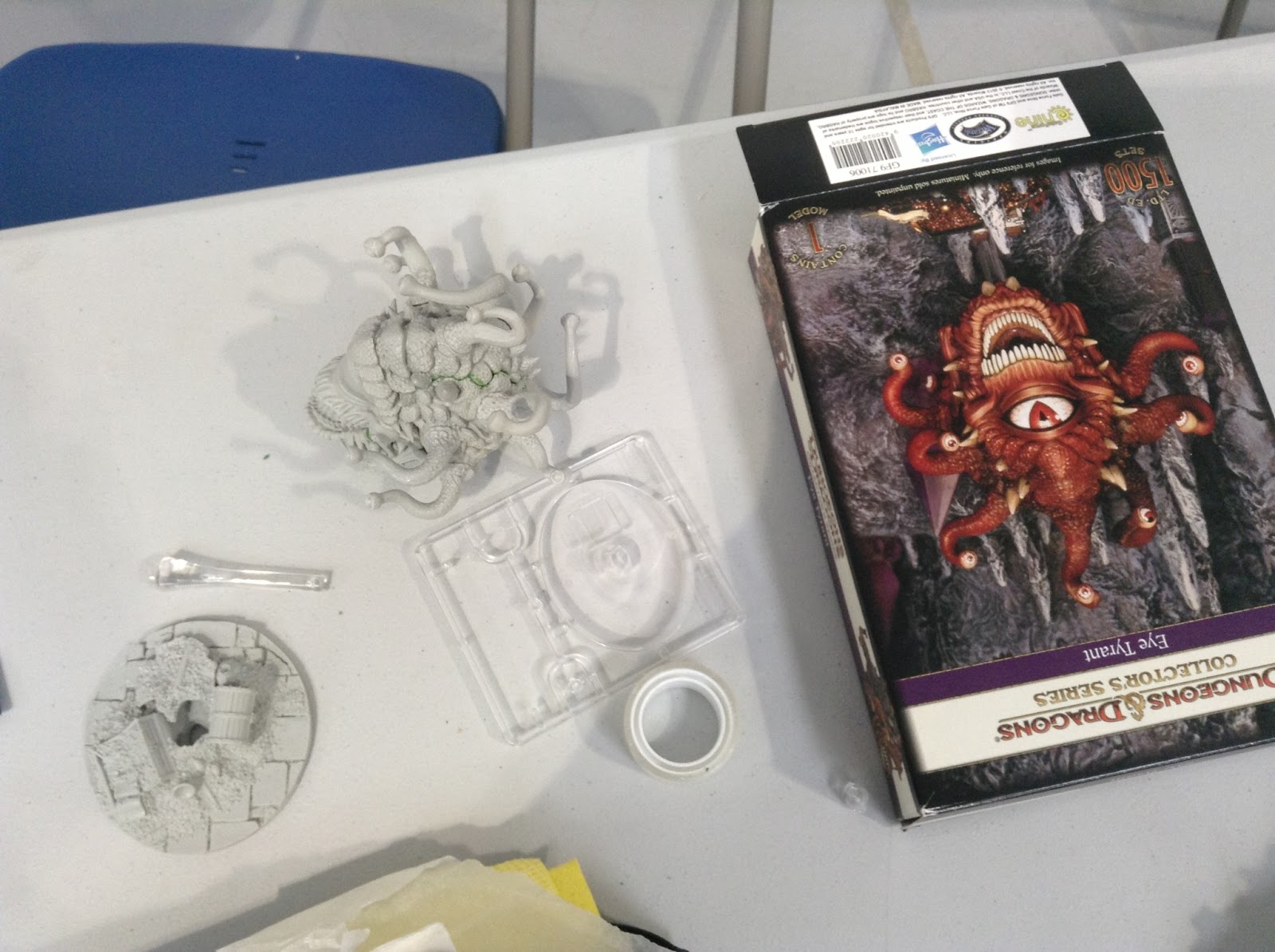 Next to Chuffy was a nice French gentleman who was assembling an Eye Tyrant from Dungeons and Dragons. 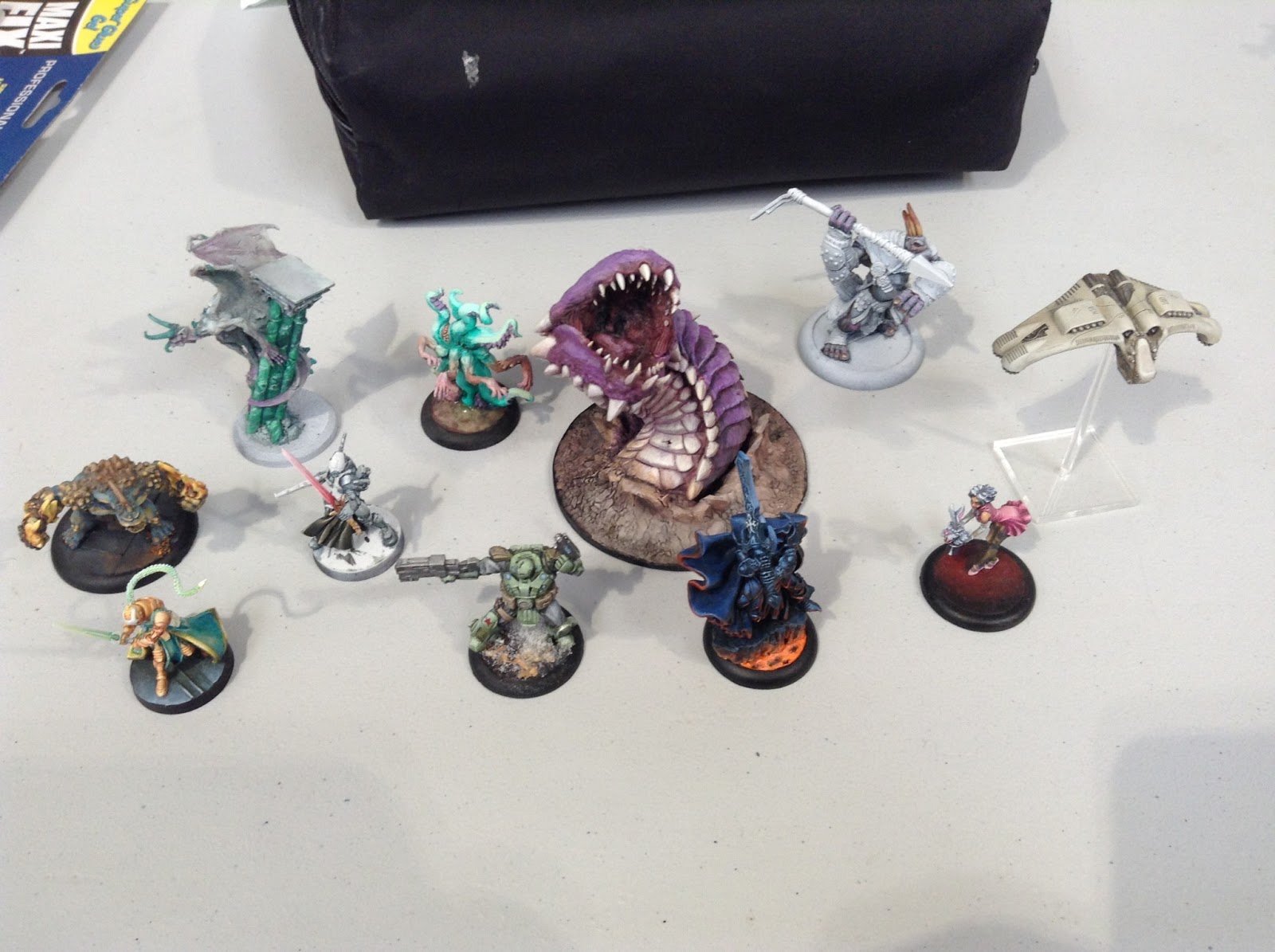 He had several beautiful finished models to show off as well! 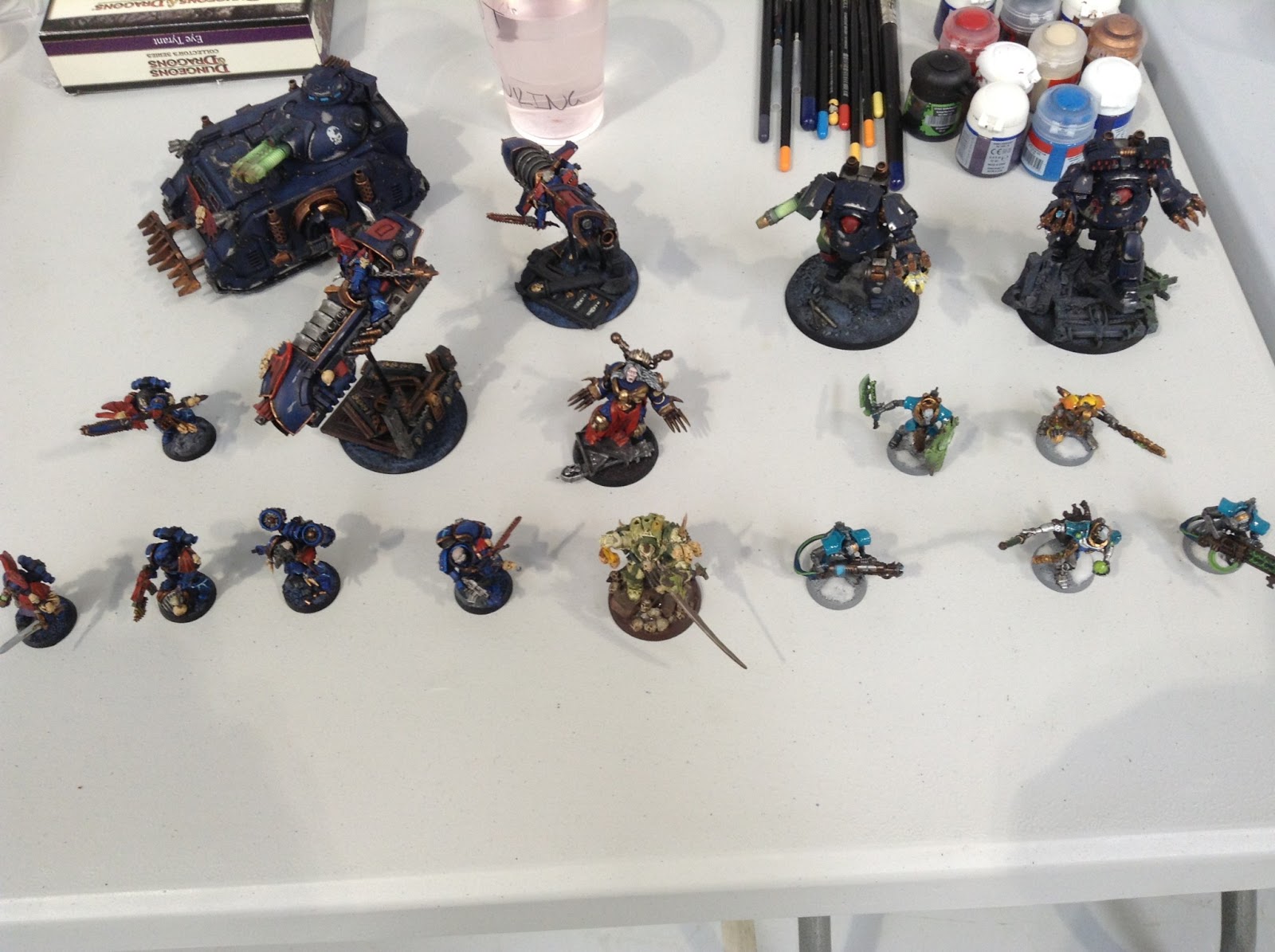 There were also a lot of models being displayed by Hazard Syndrome. The Necrons had a really nice gloss finish on their armour plating. 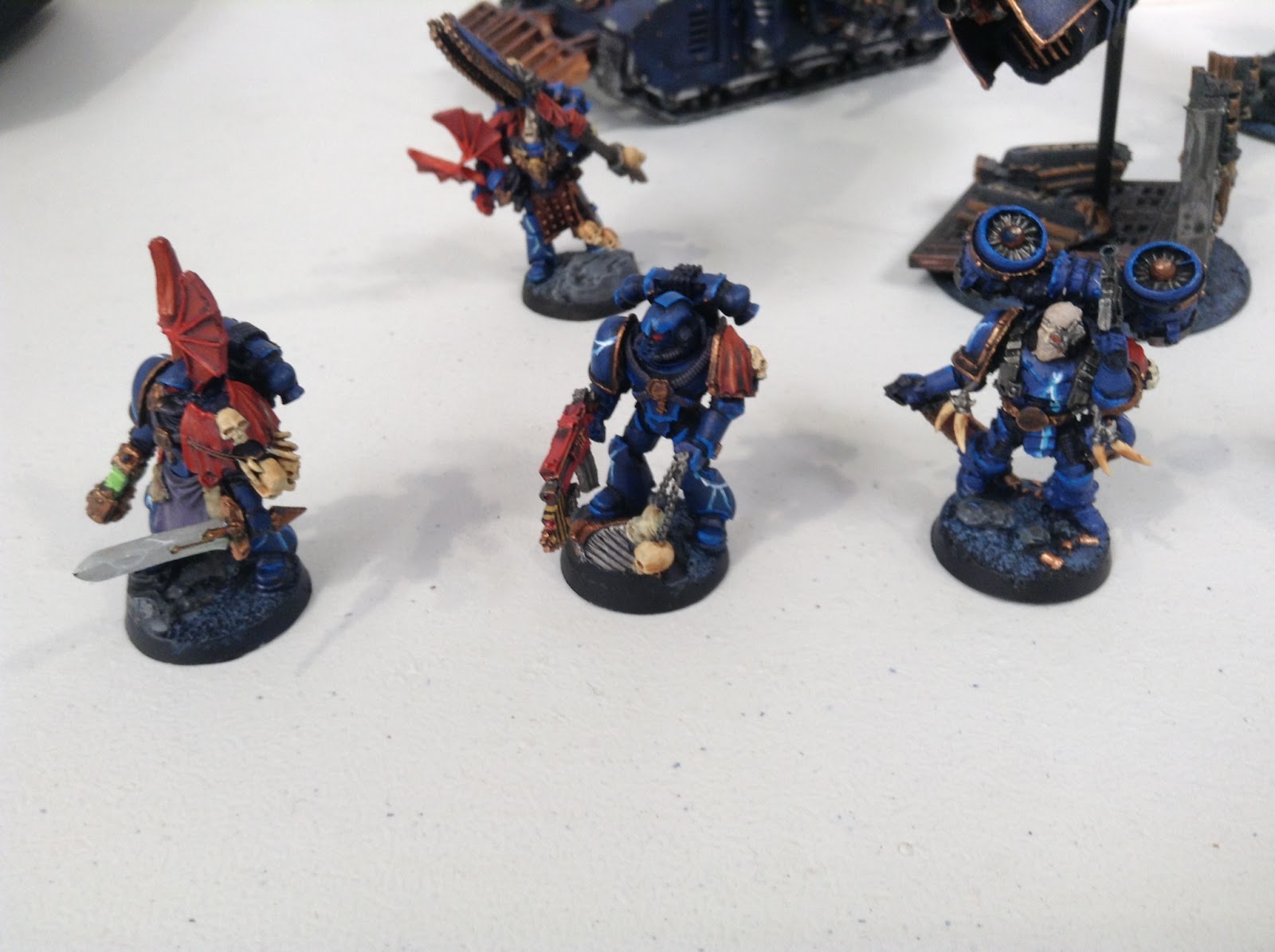 Most of what he'd painted were Night Lords. 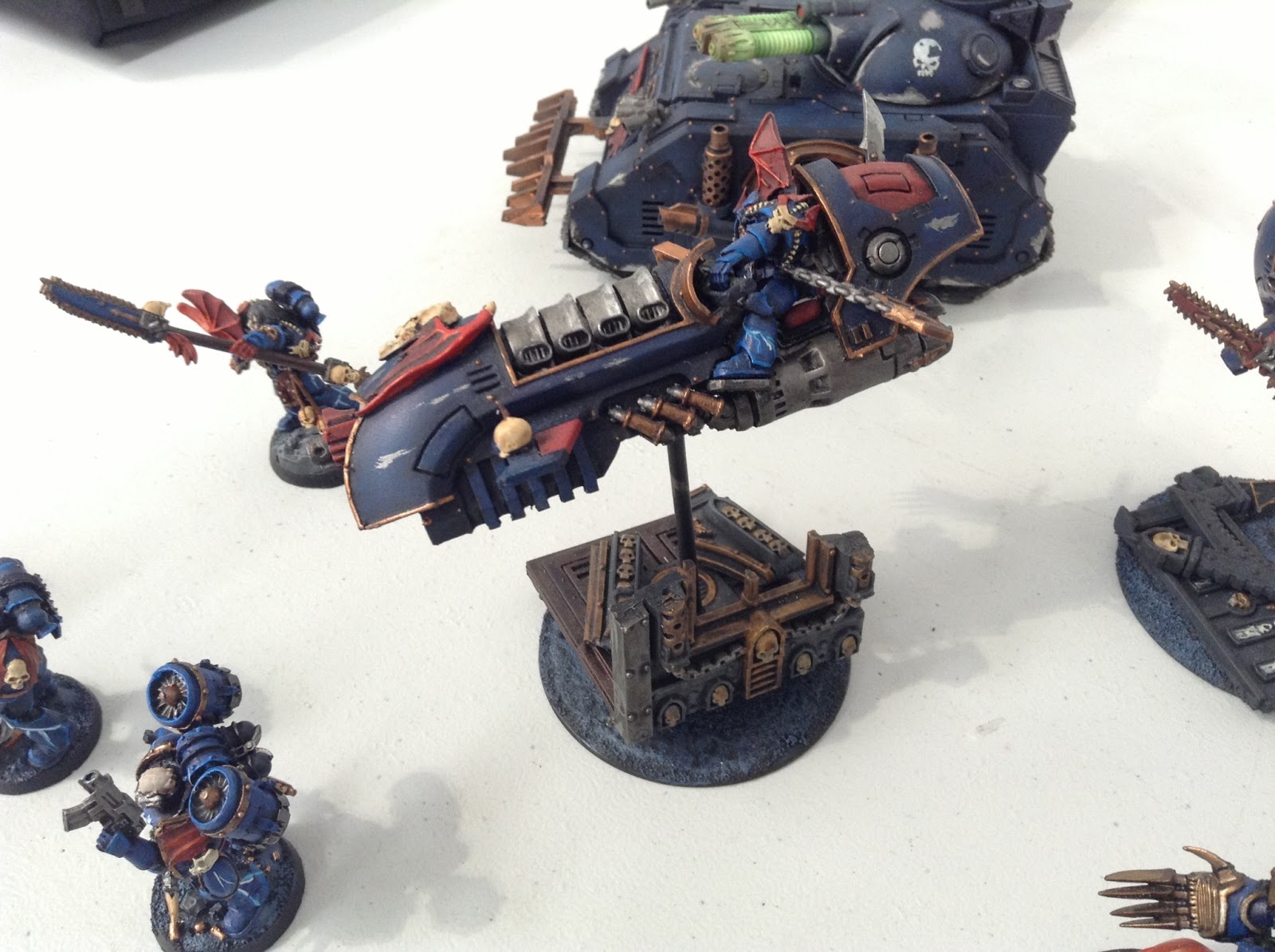 There were some gorgeous Heresy era models, including this jet bike. 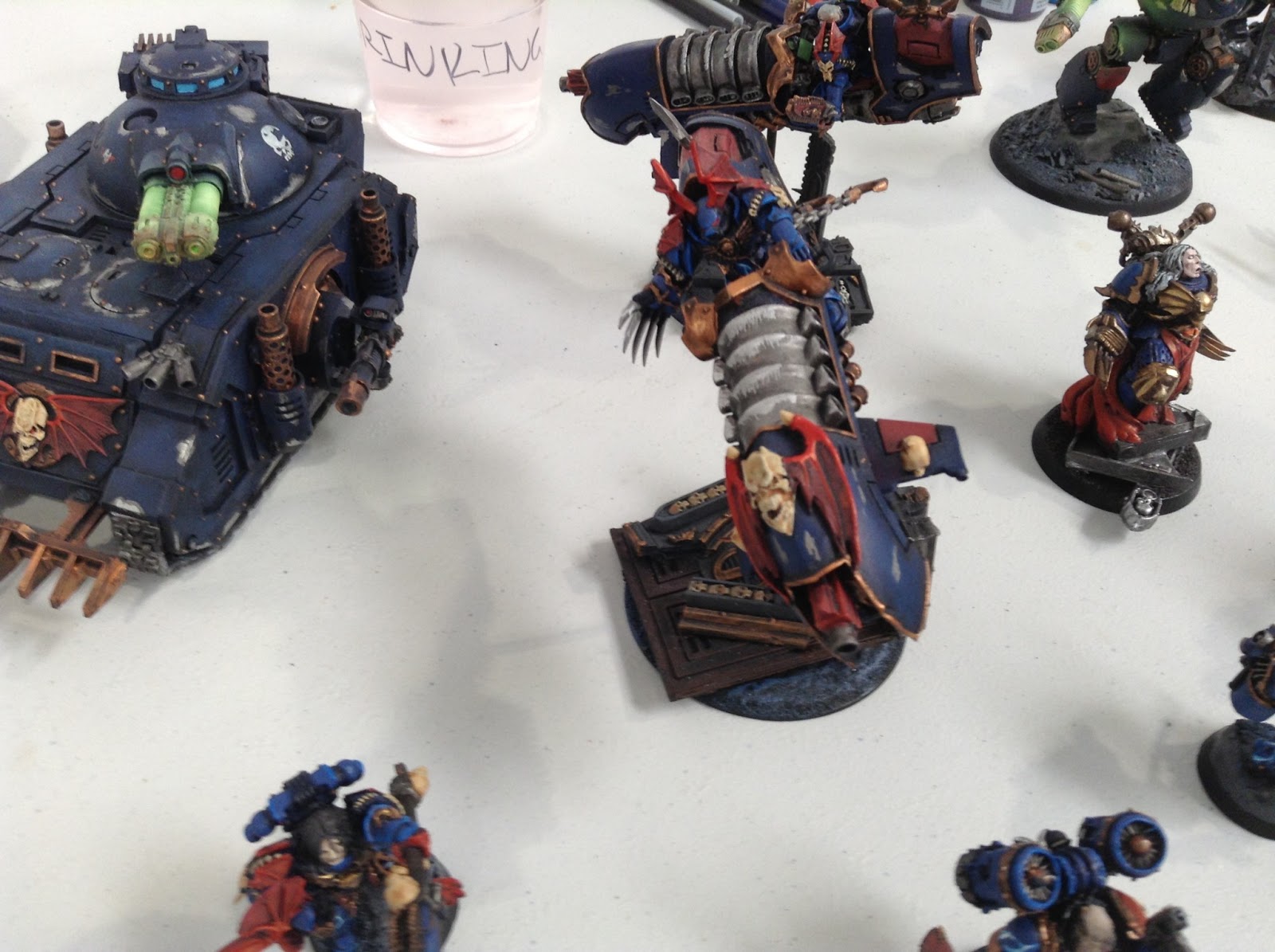 In particular, I love the way he's got it swooping down to deliver a claw blow to some poor unfortunate. The Predator is lovely as well - he definitely likes his glowing plasma coils... 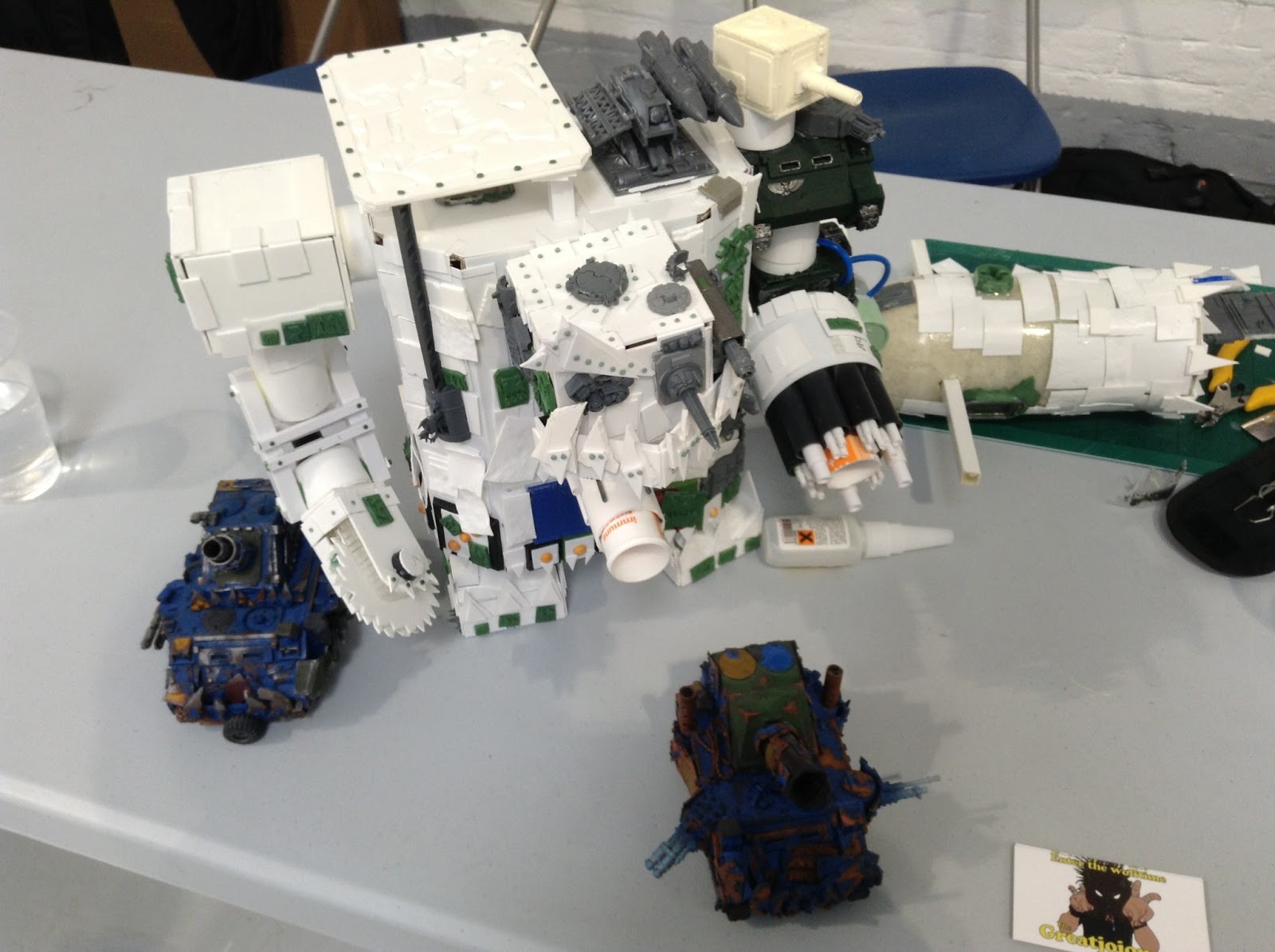 I also had a nice chat with the Great JoJoMan, who mostly scratch builds and kit bashes Ork vehicles. We spent a bit of time looking over the Dust Warfare walkers in the shop section in the later part of the evening and discussing whether or not he would start up a new game like Dust Warfare... This is his Ork Stompa with a Secret Project being caught in the background. 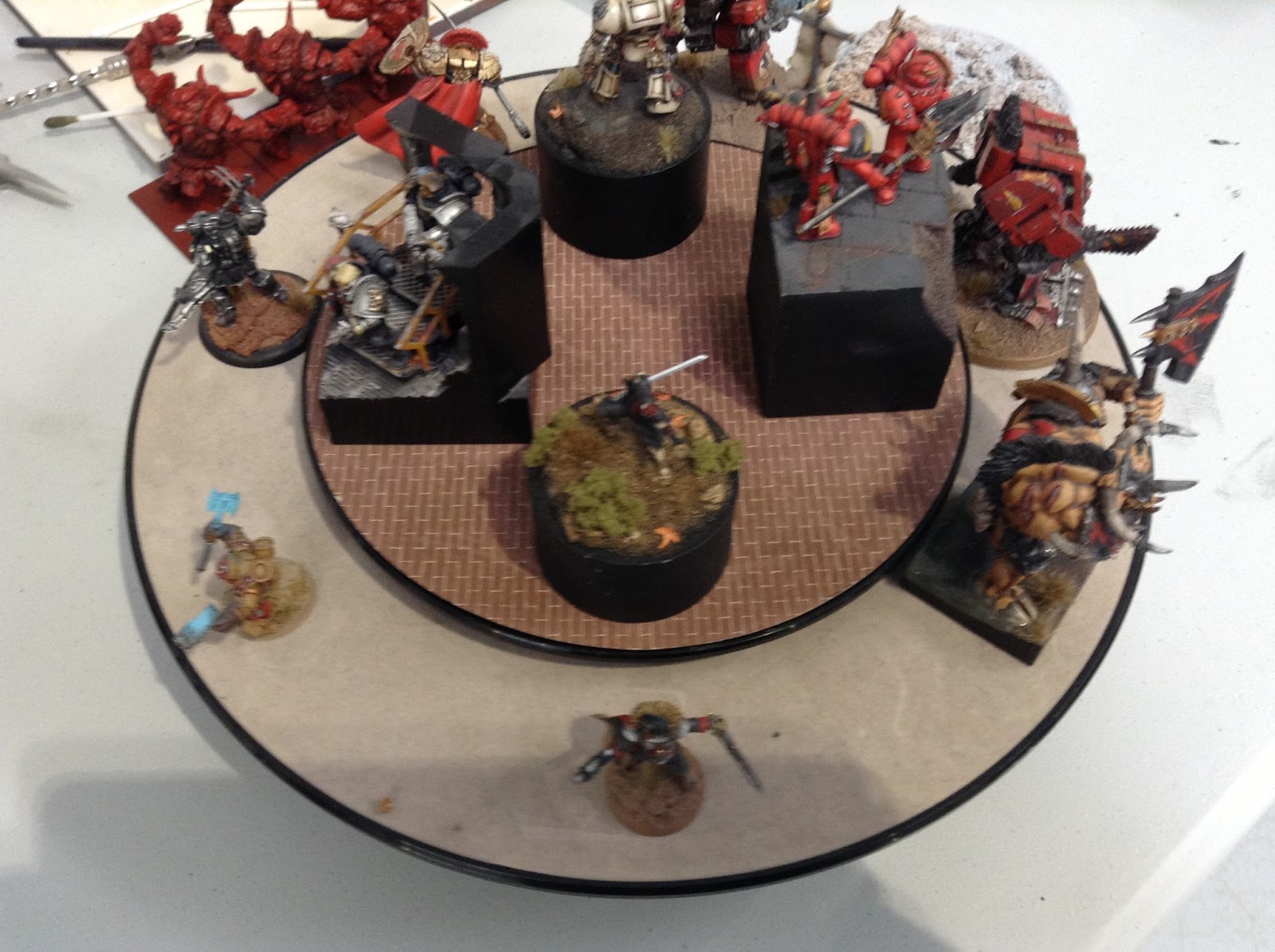 Sim had a bit of a chat with Cha1nzz, who is another Youtube chap, and who does a lot of stuff on airbrushing. 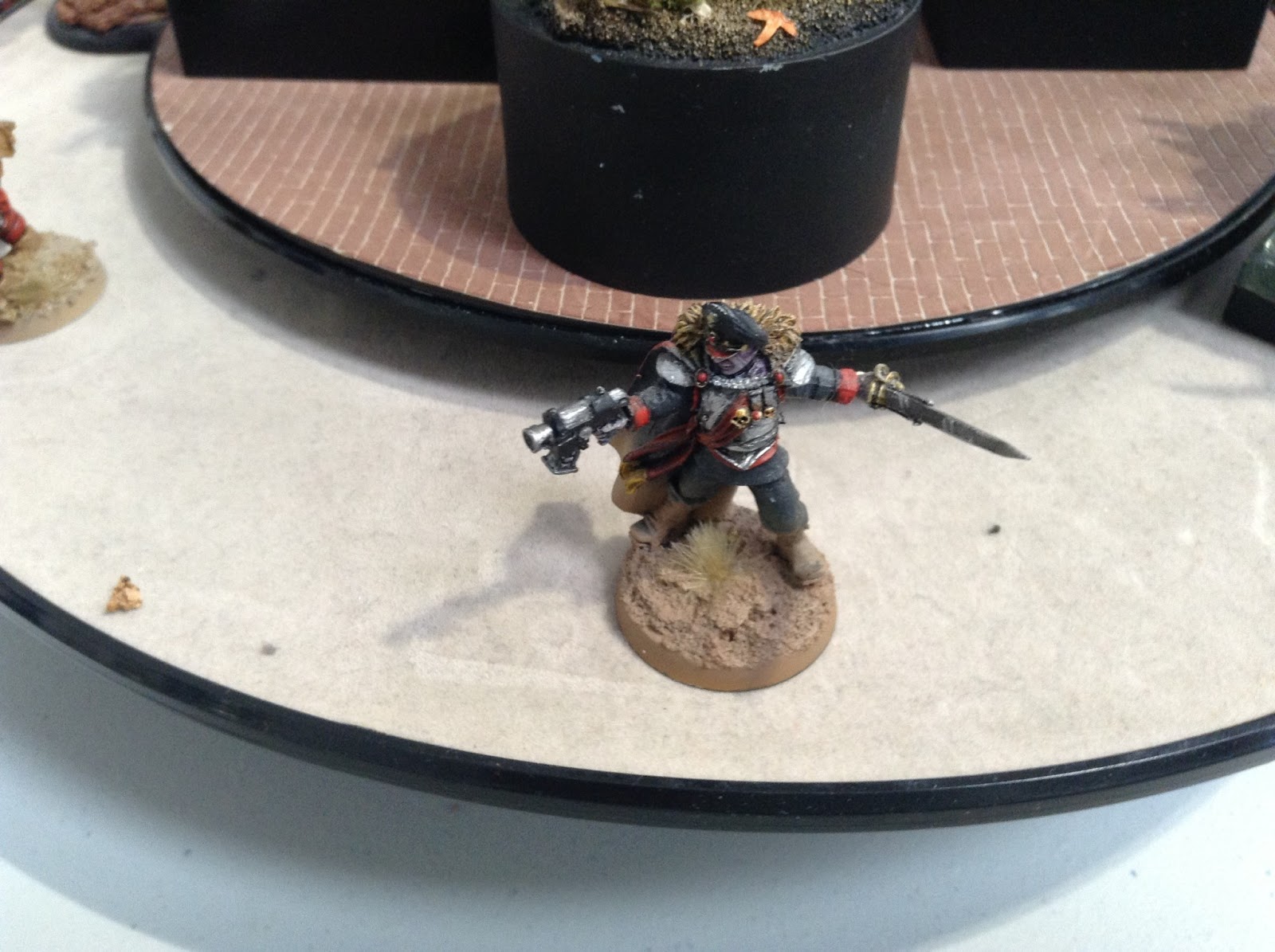 I was happy to see the Imperial Guard love with the Lord Commissar... 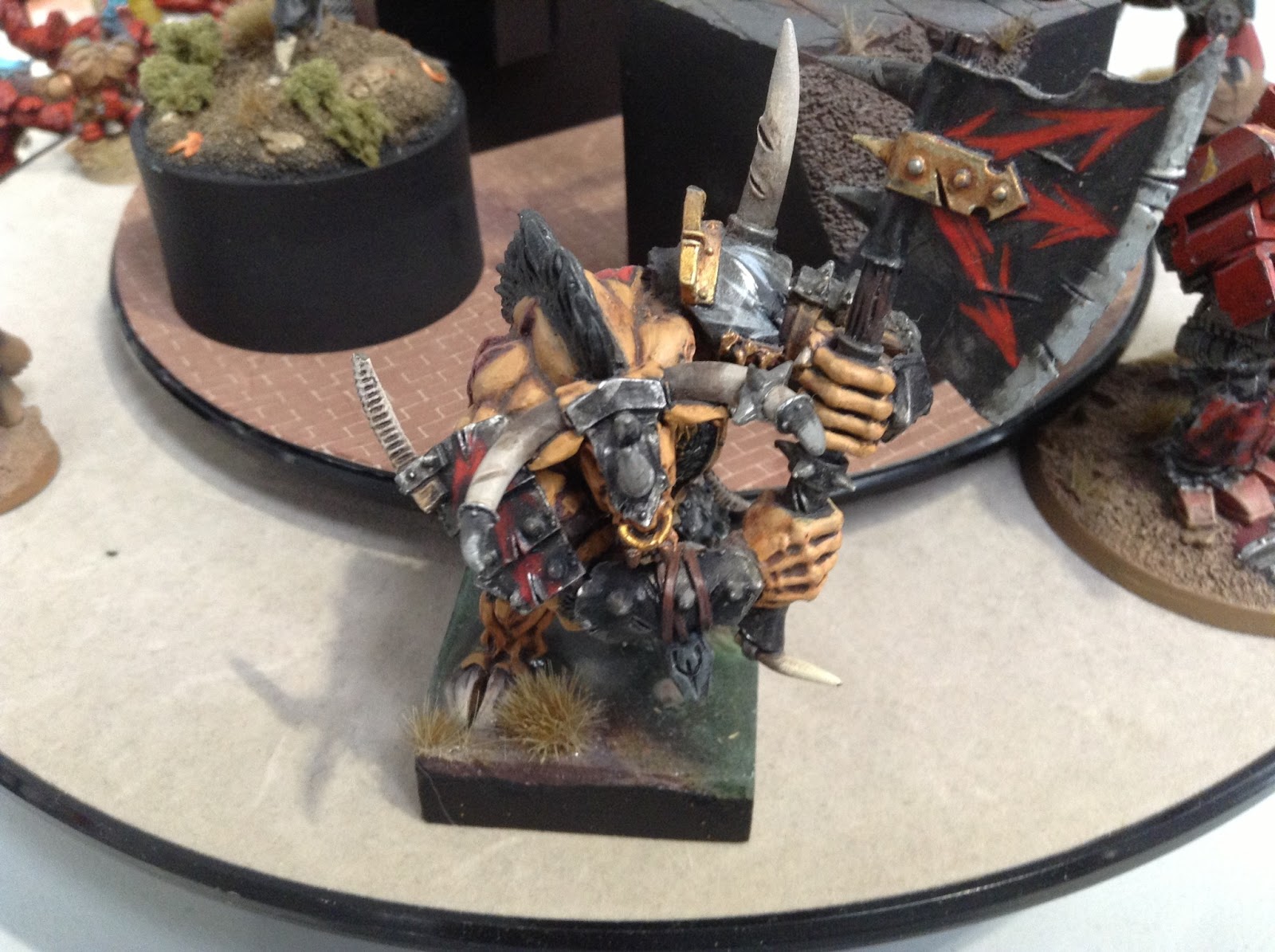 And this was an absolutely gorgeous minotaur - I love the work with the flesh in particular. 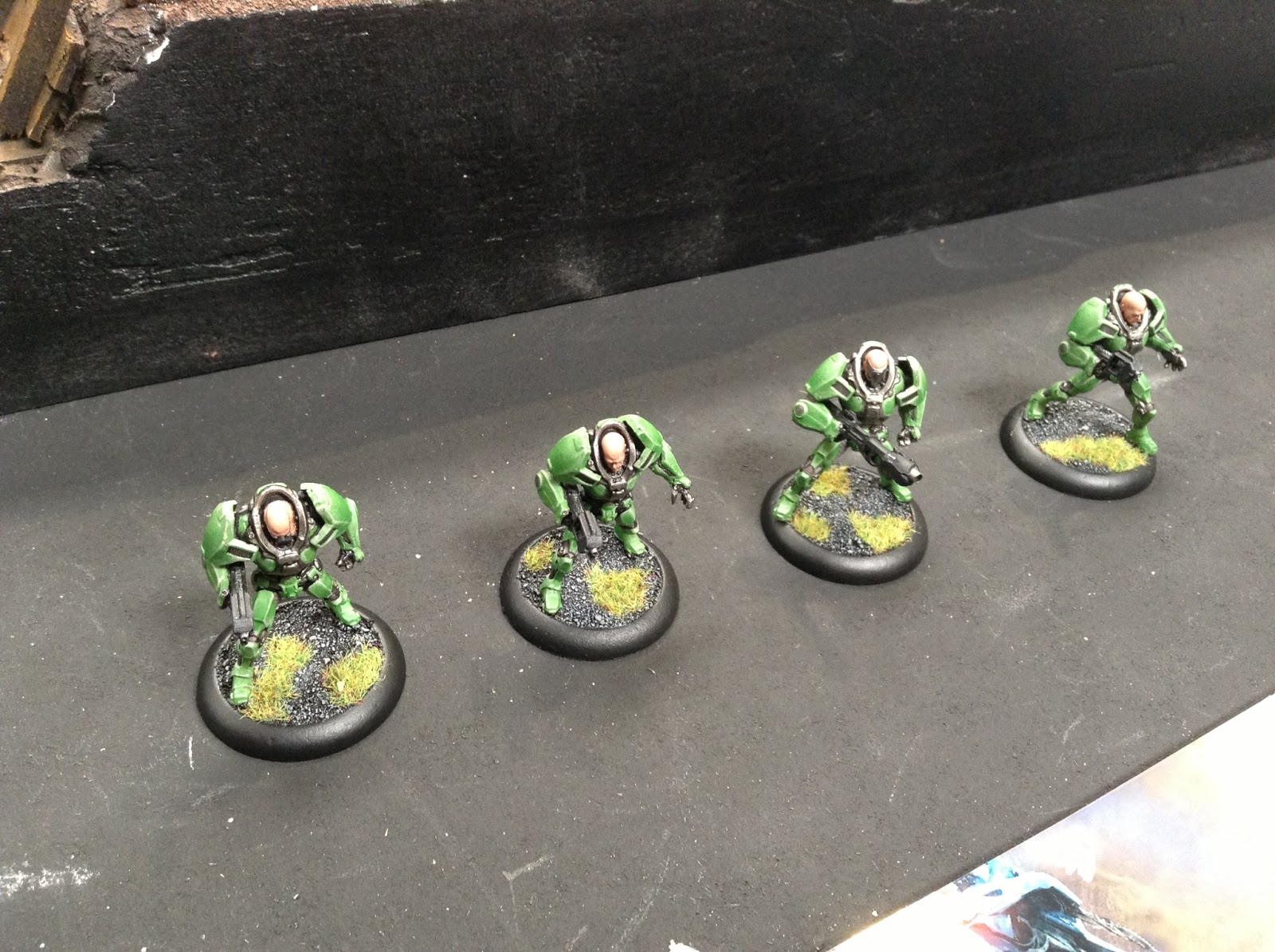 We had a look at Warzone Resurrection, but never got around to trying out a demo game. The models do look interesting, but aren't something I'm immediately wanting to go out and buy everything from their range. 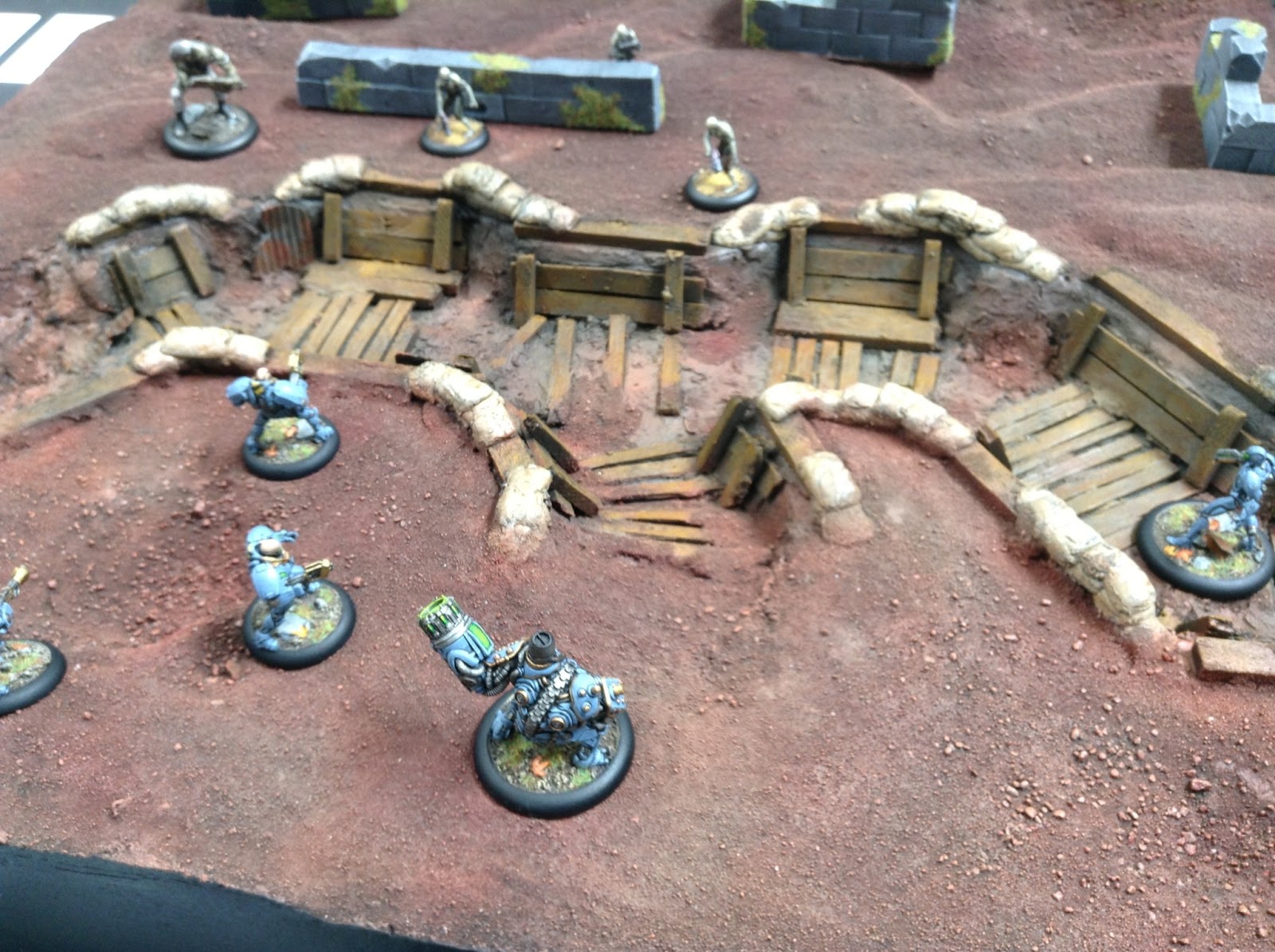 They had some lovely 2 x 2 boards which they were demonstrating their game on. 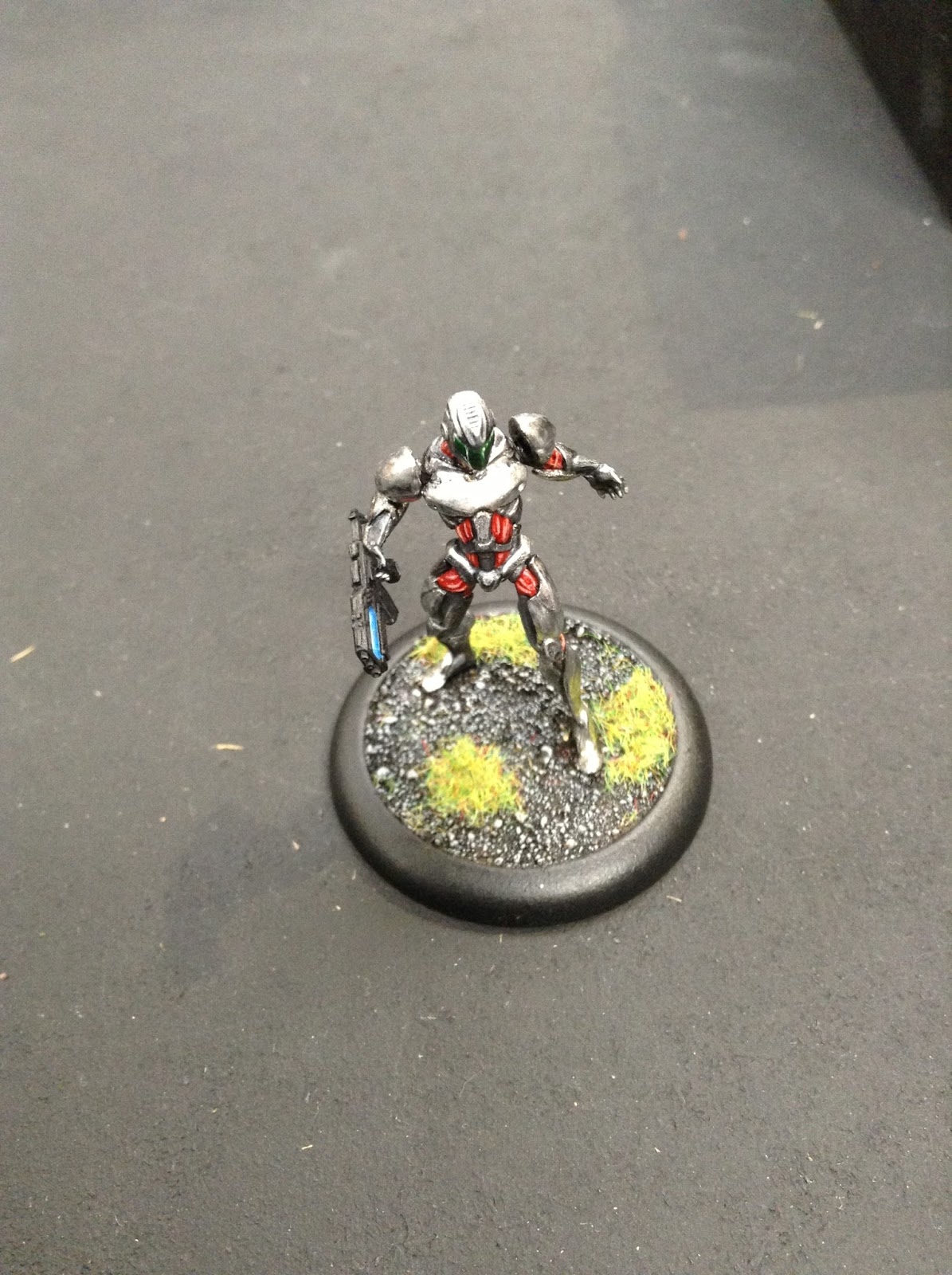 If anyone knows how to get this chrome effect, seen on another example miniature from Warzone Resurrection, my wife will pay one slightly tarnished soul for the knowledge.


Tabletop Nation also has a bar. The food options are "hotdog, burger or chicken wrap", but it was hot and the meal deal is reasonable (individual prices are a bit steep). 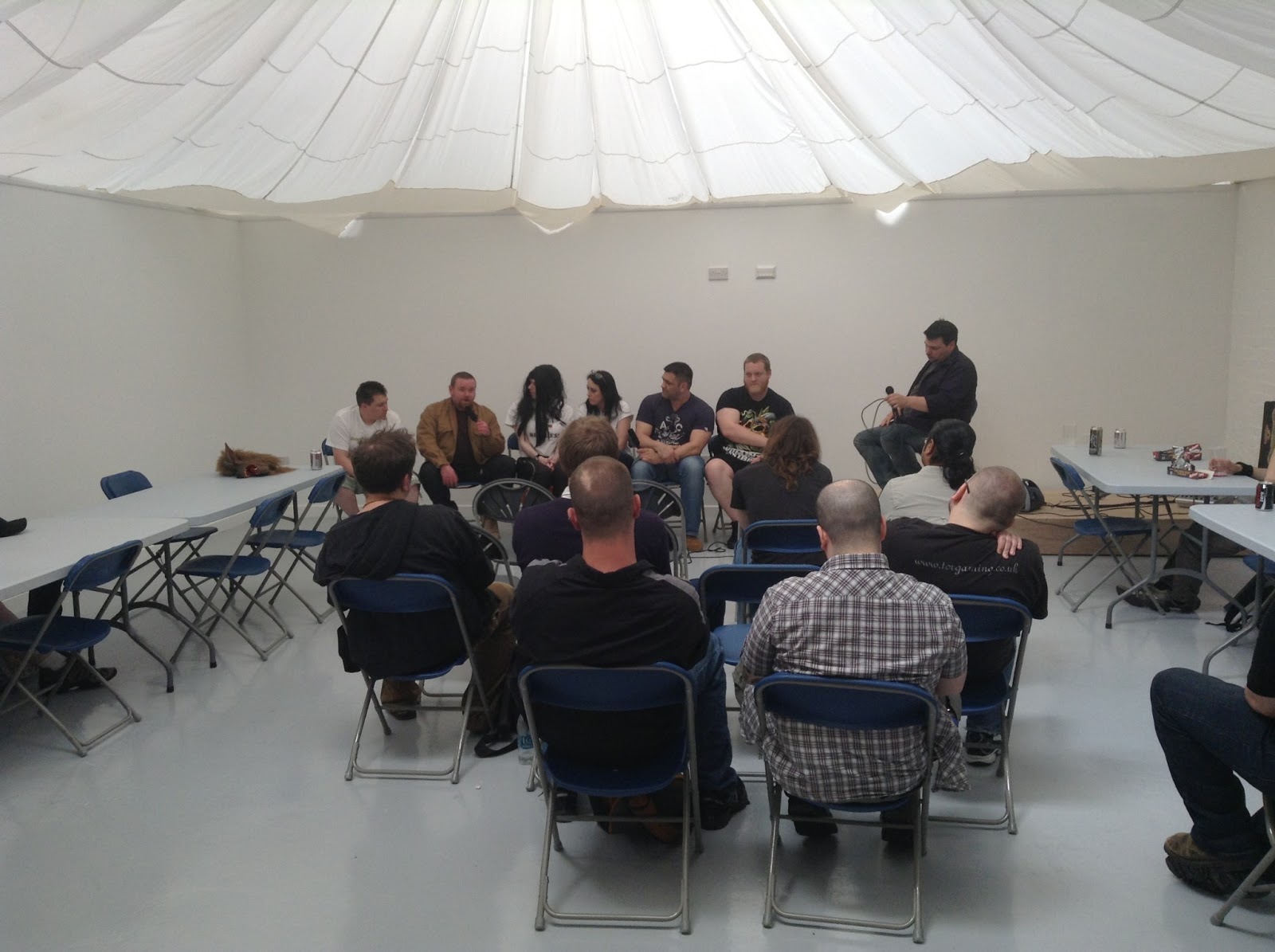 The Youtubers' panel. "We should make more of an effort to look less like wierdoes" Andy's point is undermined (or perhaps made?) by sitting next to "Zoeyberry"...


Sim and I also got to do a demo game of Relics, which resulted in Sim buying an awful lot of Nuem. She bought me a few Britanan so she had something to fight against... I am having a teensy bit of second thoughts and wondering whether I should have gotten Vaettir instead, so I'm painting something a little different to normal - but then again, I like my redcoats and I like my puppets, and Britanan is both!


We also got to meet Joeyberry, whose Youtube channel I've been watching for some time. Sim hadn't, but when hearing her talk complete sense about women in wargaming during the panel, became an instant fan!

I have a bunch more photos from the Relics demo game that I took, but I'll save that to another post. I really enjoyed the day - we didn't go back for Sunday as I was already booked to go to my regular LARP game, but we had a lot of fun.

If you want to see more video footage of the event, you can go here.
Posted by The Responsible One at 13:30