So, a while ago I had a genius idea.

I don't have them very often, but I thought I'd share.

Its always a bit of a pain remembering which unit is in which transport. Most people I've seen using some sort of visual reminder do this sort of thing:

You place one or more models on top of the transport, and you're good. However, given that you can also have your models stand on top of a wrecked transport, this could in theory cause some confusion. 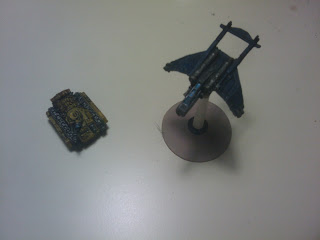 By using models from the Epic range, you can have a nice reminder at the edge of the field with the squad leader next to a miniature version of your unit.

Of course, a genius would have thought to take a photo of this to look really slick.

Guess I'm not that smart after all...
Posted by The Responsible One at 23:35 No comments:

Some of you may recall a while ago I mentioned I was going to try and get involved in a painting competition over the Olympics.

So, how did that go? 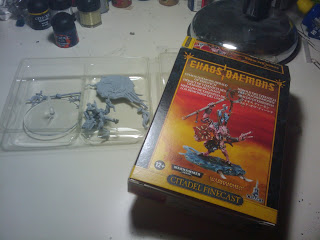 Anyhow, I think I have managed to use the time a little more productively: 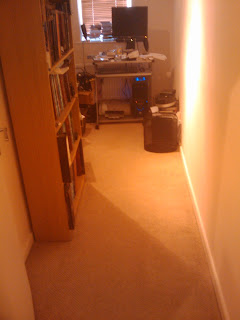 As this floor is no longer waist deep in junk, I feel like I'm getting some progress! However, there is a pile of boxes as tall as I am around the corner to the left, and I still have to neaten the bookcase, plus a further bookcase downstairs. Still, I feel some sense of achievement.

I've also finally got a spreadsheet together to keep track of all my projects. 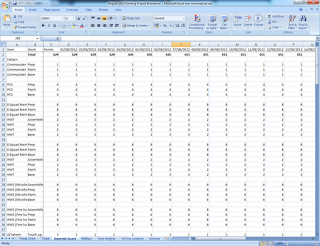 The way this works is that it doesn't simply count the number of models I still have to finish. Effectively, painting a single model to tabletop standard is one "point". Assembly, or prep work, similarly, take about the same amount of effort.

From then, anything more fiddly or awkward gets a proportionately larger amount of points - similarly, something I want to put a load more detail into gets a ton of points as well. The biggest painting job, points wise, is the Black Reach Ork Warboss I have which I want to paint up like the Eavy Metal Masterclass book. I'm skimping on the conversion work they did for the sake of my sanity, but I've assigned a couple of points per page of instructions in the book for a massive total of ten points - not to count the couple I've assigned to clear up, green stuff any gaps and undercoat him.

My total count comes to around 804 points, which is around 13 months work for me alone working at the pace I was at when prepping up for Throne of Skulls at the start of the year.

Lets just say I'm not at that pace yet. I have no idea how many models it is, but its a lot. I may want to think of some way of adding a model tracker as well, but that might also make me sad...

Still, my first goal is to start by trying to get more done than I buy, which I'm aiming for this month. The kitbash test models I picked up earlier in the month amount to 16 points. (Because the kitbash experiments will take time, and I also want to paint them up to a decent standard for the blog & the bits people I bought the parts from.)

In an effort to get my first point done, I've started work on an Empire Battle Wizard for my beloved wife. Well, I'm doing the prep work and assembly, in exchange for the rest of the bits in the kit. She got given it at the Golden Demon Masterclass she went to!


Anyhow, they did freehand on the back of a wizard's cloak, but got given the box with the second wizard and all the bits.

I immediately coveted all the bits. Negotiation then occurred. I get the bits if I assemble the other one for her to paint for ebay.

The first one is still a work in progress, and I got sulked at when I asked if I could take a photo of the work in progress with my terrible photography skills and camera!

So, I have tried a little blu-tack to see what the second wizard would look like when assembled. I had the idea of using the potion bottle to make it look like something has just exploded in the wizard's face! However, I'm really not sure if the pose of the model will allow it, so I'm going to show it to Sim later and see what she thinks. I currently think the hand with the potion bottle is just too high and I can't incline the neck high enough to make it work...

So, finally, there is movement on the modelling / painting front, if epicly slow. Lets see if I can at least end the month with as much work as I started the month with...
Posted by The Responsible One at 19:00 No comments:

Email ThisBlogThis!Share to TwitterShare to FacebookShare to Pinterest
Labels: Dark Sphere, Finecast, Painting, Statistics, This week, to do, Wife

I had a moment of weakness this week and picked up the necessary parts I've been looking for to do a couple of Imperial Guard conversions I've been intending to try for a while.

I was pottering through Ebay and found someone selling the individual bits I needed to do a single test model for each of the conversions, which is a lot less of an investment in time and money than buying entire boxed sets or 20 or 30 sets of bits!

I have a great deal of love for kit-bashing, even though my wife cannot see the point in it one little bit. I love putting together a unique force with the look I want. Its not about showing people I spent twice as much money as them on an army - ideally, they'll be wondering when GW brought out new models they haven't seen yet. (I am not yet this good.)

So, I picked up was the body of a Brettonian Man at Arms (I think a champion or similar) in order to try using that for a Guardsman. This was the extra thing I decided to get alongside the main thing I was after. A beastman. Or rather, I've got an Ungor body and a Gor head and horns. I don't like the Ungor heads, but the Gor bodies are too festooned in chaotic symbols for them to work without a ton more work than I'm willing to do.

The plan is to use Beastmen as my penal legion. It suits - poor equipment, and vicious in combat.

Painting, meanwhile, has taken a backseat to the day job being busy, the Olympics, and a major blitz on housework. This makes me sad, so I will try and get some sort of progress to report for next week.
Posted by The Responsible One at 19:00 No comments: