I'm pleased to report that we've moved into the new flat, so all we need to do is unpack!

My computer is still packed up, but I've managed to use my phone to update my "On the Desk" page and write this post.

Unsurprisingly, nothing new is painted yet, and the expected slip in the "paint 2, buy 1" rule has happened to make sure I get all my Druze ready for the upcoming tournaments. I also won an HVT model in the Infinity League.

So, purchased or won this week:

That's 19 models in the hole - so 38 models to paint to get back on track! Still, I've sent off another batch of Druze to my painter so that should get me a bit back on track, and I hear my goblins are progressing well too!
Posted by The Responsible One at 19:00 2 comments:

The end of the Infinity League: Corregidor vs ISS, Frostbyte 400 points, Spec Ops and Soldiers of Fortune 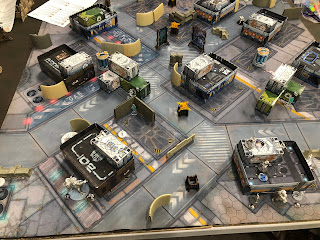 As the HATE Infinity League had lazily drifted into Season 10 for the final round. I drifted a bit on reporting these, but thought it would be good to write up this last one as it was a rather spectacular 400 points with Spec Ops and Soldiers of Fortune extras, using the new Season 10 mission Frostbyte. 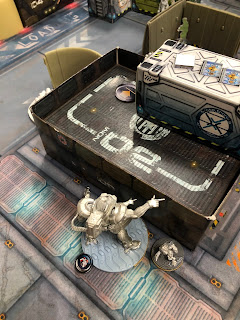 I was pleased to be drawn against PeterHB, whose Imperial Service I have played a couple of times before, and who has mostly been cursed with a rampaging Hellcat ruining all his plans. In the spirit of good natured japery, I decided to not take any Hellcats, but instead two full combat groups including four Yuan Yuan drop troops - mercenaries I was allowed to take because of the Soldiers of Fortune extra. 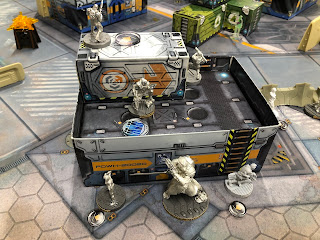 A defensive Alguacile link, McMurrough the angry werewolf and an Iguana TAG rounded out the list. We ended up playing at Dark Sphere due to PeterHB not being free on a Wednesday for a while, and Dark Sphere having the magic power of Being Open On Tuesdays. 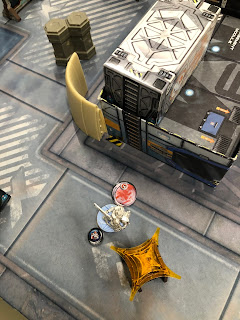 Unfortunately, I stuffed up deployment and the gap I left for my reserve model (the Iguana) left it slightly visible and it got smoke sniped. The Operator ejected but the Wu Ming happily stomped up the board and shot him down. 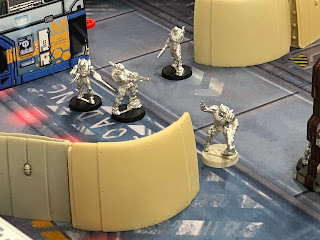 The Wu Ming link was as brutal as expected, and caused a lot of damage. Unfortunately, for me the Yuan Yuan performed so disappointingly that they haven't even merited a photo... Most missed their targets, one landed and managed to cause no damage before being gunned down. 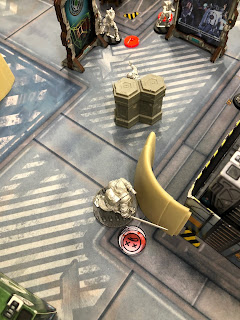 McMurrough had another disappointing day. I think he's great but I've just not quite managed to get him to work yet. 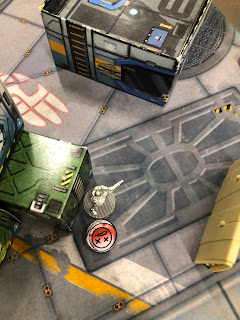 Herein is a lesson about model placement. Here we see an Intruder HMG, sadly unconscious after a lucky critical hit in ARO. He's out of sight, because I was smart and moved him out and back again on the move that he took the crit. 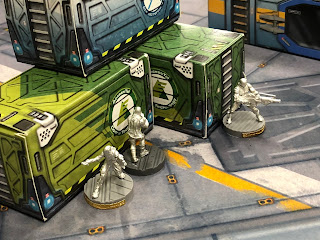 So, I get a Jaguar to throw smoke over everything, bring a Tomcat doctor in as a drop troop, and heal up the Intruder. Hurrah. 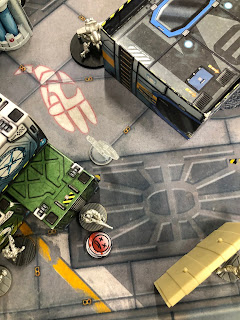 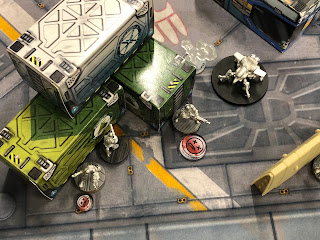 With the Intruder neutralised, the Rui Shi comes further forward. Oh look - neither the Jaguar nor the Tomcat are looking in any kind of useful direction if the Intruder fell. One of them should have been, even if the other was then covering the other side of the shipping containers. Sloppy and badly planned - this cost me all three models in the end! 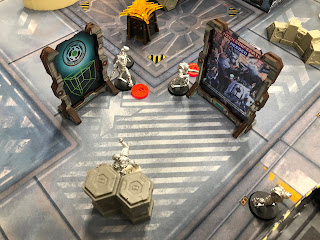 While my Spec Ops wandered up the table and managed to, by dint of shooting people in the back with a Combi Rifle, take out two heavy infantry single handedly, it was too little too late. The Imperial Service had scored most of the points and I had lost 9-1.

PeterHB deserves some serious kudos here as he played an excellent game, using the right tools for the right jobs. Meanwhile, I made several stupid errors which compounded a likely loss into a thorough drubbing. Once the house move is done, time to get as many practice games as I can in for the new season!
Posted by The Responsible One at 19:00 No comments: 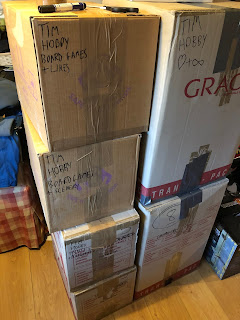 Hobby is mostly on hold in the house at the moment as most of my hobby stuff is packed away in boxes for the ever delayed house move. We're nearly there! 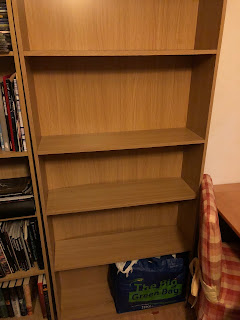 When not packing, I've been daydreaming about hobby plans once I'm at the new place. There are definite "new leaf" plans.

Goodness knows how long this will last (the last in particular is likely to suffer at the expense of rounding out my Druze force for this year's ITS season).

Wish me luck!
Posted by The Responsible One at 19:00 4 comments:

On the Impact of a New Infinity Classified Deck 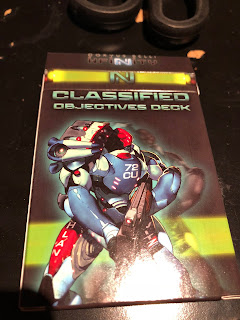 Corvus Belli, who make Infinity, run an Elo rated tournament season from September to August each year. We've just hit Season 10, and with the new Season has come an updated Classified Deck. These are secondary missions you secretly select for many of the game's missions, scoring you assorted points. It was introduced with the 3rd edition of the game, and with the lessons they've learned since the start of the new season, it's undergone a pretty significant overhaul. 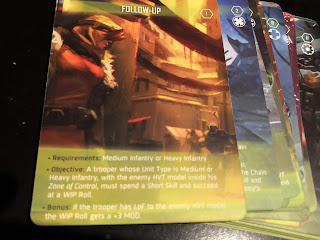 The first obvious change is that it's now two decks of twenty cards, with twenty different missions. Before, it was one deck of forty with four sets of ten missions. You can read a summary of the misssions in the Season 10 ITS pack, available from the downloads page of the Infinity website, but it doesn't contain enough information to fully use the deck. 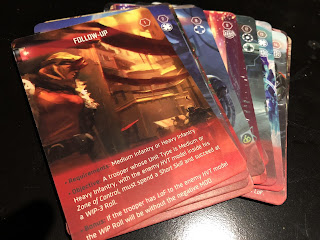 The second deck, in red, is a new "extreme" deck where the missions are harder to complete. This is simply a different option, but it will change the decision making process about whether your chase the points for the classifieds or the main mission.

When going through the new ITS missions, we saw a couple of comments like those above - which relate to symbols on the card. 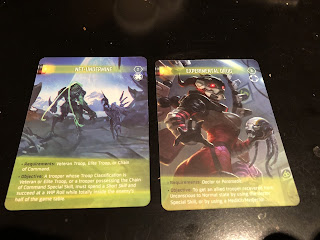 There is some level of theming to these - the one that looks like a medic's cross are usually doctor's missions, for example. I've not worked out all of the themes, though, so I've not yet worked out if there's a particular reason for the extra rules. I suspect it's intended to be a flavour thing over a competitive thing - encouraging the taking of cards that suit the theme of the mission. 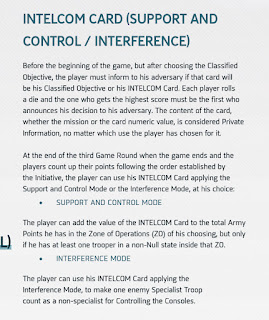 I was never hugely sure about "Intelcom" - which were used for a variety of things including cancelling a model's effect on scoring or scoring some points towards control zones. The former hasn't really changed, but the latter sort of has. 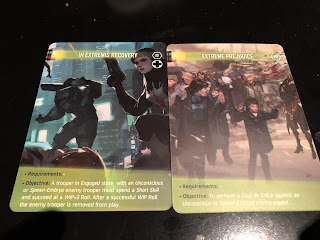 With the reduction to 20 cards from 40, the numbers on the cards, used as a points substitute, have a much smaller effect. A card in the mid 30s or even the 40 could hugely sway a game as you had to be really strongly winning to have a chance of holding off a card. Now, a maximum swing of 20 points rather than 40 leaves it still potentially strong, but not quite as overpowering based on a lucky card. 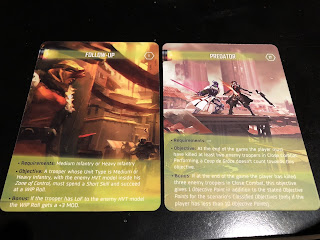 Finally, the number of classified missions have risen from 10 to 20. While some still rely on specialists, others require on troop types, troop classifications, certain equipment or even close combat kills. This means that if you want to be comfortable achieving any classified you draw, you will need to think a lot more about list composition and, in theory, take a more balanced list.

All in all, I'm in favour of the new Classified Deck. Some people don't like the randomness when both players get missions that are of varying difficulty for them to achieve, but it's not a huge number of points, and Securing the HVT on the field remains a viable option for builds that are bad at Classified Missions. The greater variety also means that you can build towards those cards that don't require specialists if that's not your army's strength, and still have a chance of getting missions that suit your build.

I'm not sure of the viability of or buy to of the "Extreme" classifieds. Outside of the Highly Classified mission, where all points scored go from the deck, most missions only have one or two points coming from the deck. I suppose it actually favours those who aren't in favour of Classifieds, as by making them all significantly harder, you're reducing the chance of people spending the time completing them, meaning more emphasis is given to the main parts of the mission.

At the time of writing, I've only played one game using the new Classified missions, so can't really advise on completing them - but I hope my first thoughts on how they may impact the game are of interest to people.
Posted by The Responsible One at 19:00 No comments: 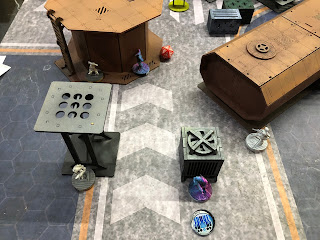 A few weeks back, HATE was lucky enough to get some visitors from St Albans and I arranged a game with Laina, their Warcor. I wanted to get some practice with my Druze, while she was looking to get a bit of a better understanding of her Aleph force.

Here you can see my deployment, with the Druze HMG taking advantage of an excellent diagonal firelane, while leaving a massive blind spot open to a warband sneaking up on it, while my Brawler MSV2 Sniper sits in a stupid position unable to see more than eight inches in any useful direction. 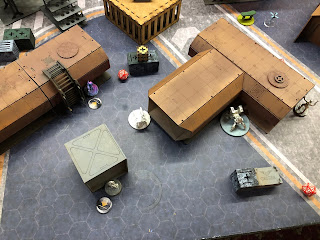 Various figures are scattered about, including another Druze in case the link needs reinforcing, a Total Reaction remote in the middle, a baggage bot ready to head forward to score some points for Quadrant Control later, and then a bounty hunter sniper being another annoying ARO piece. 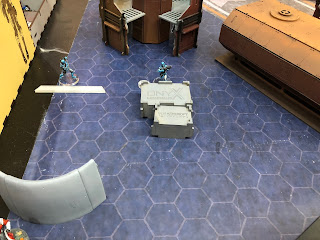 Here you can see Laina's lovely Aleph. I think these are Myrmidions. 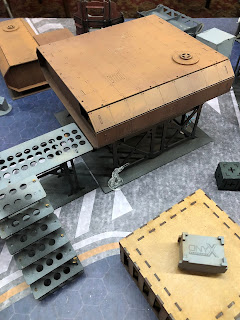 Saito Togan hid out in the middle to do some damage to whatever tried to advance. 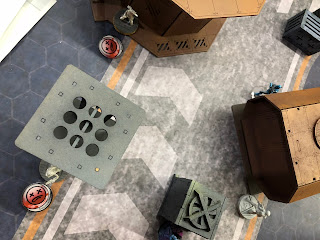 It turns out when you don't leave a good line of fire for your MSV2, a Myrmidion (with ODD) will ruin your link. 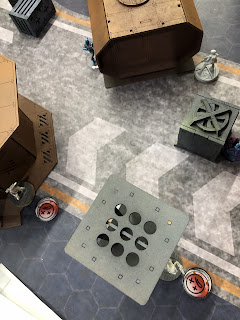 LOOK AT THESE TERRIBLE FIRE ARC PLACEMENTS! NEVER DO THIS AGAIN, TRO!! 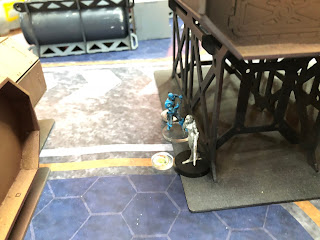 Saito Togan ran up to the Asura in Suppression Fire and was promptly critted in the face and down he went. That was awkward. 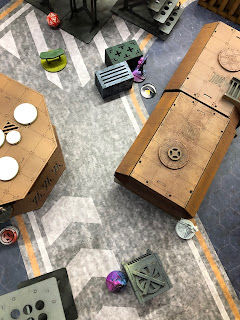 One of the hackers deals with the annoying Myrmidion by shooting it repeatedly in the back until it dies. But it's all gone pretty badly wrong. 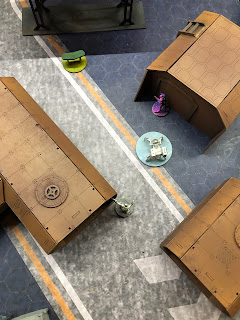 The baggage bot tries to make a break for it. 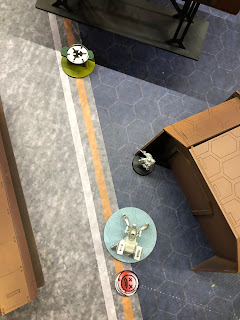 It does not do so successfully, and the Druze are roundly defeated.

Laina was a great opponent, and having not faced Vanilla Aleph much before, it was definitely a learning experience. 16 orders isn't something you expect to see from Aleph! I think there's a lot I still need to learn for Druze. They can hit really hard, but despite taking a list designed to be really strong in ARO, poor placement meant they were taken apart piecemeal.
Posted by The Responsible One at 19:00 No comments: