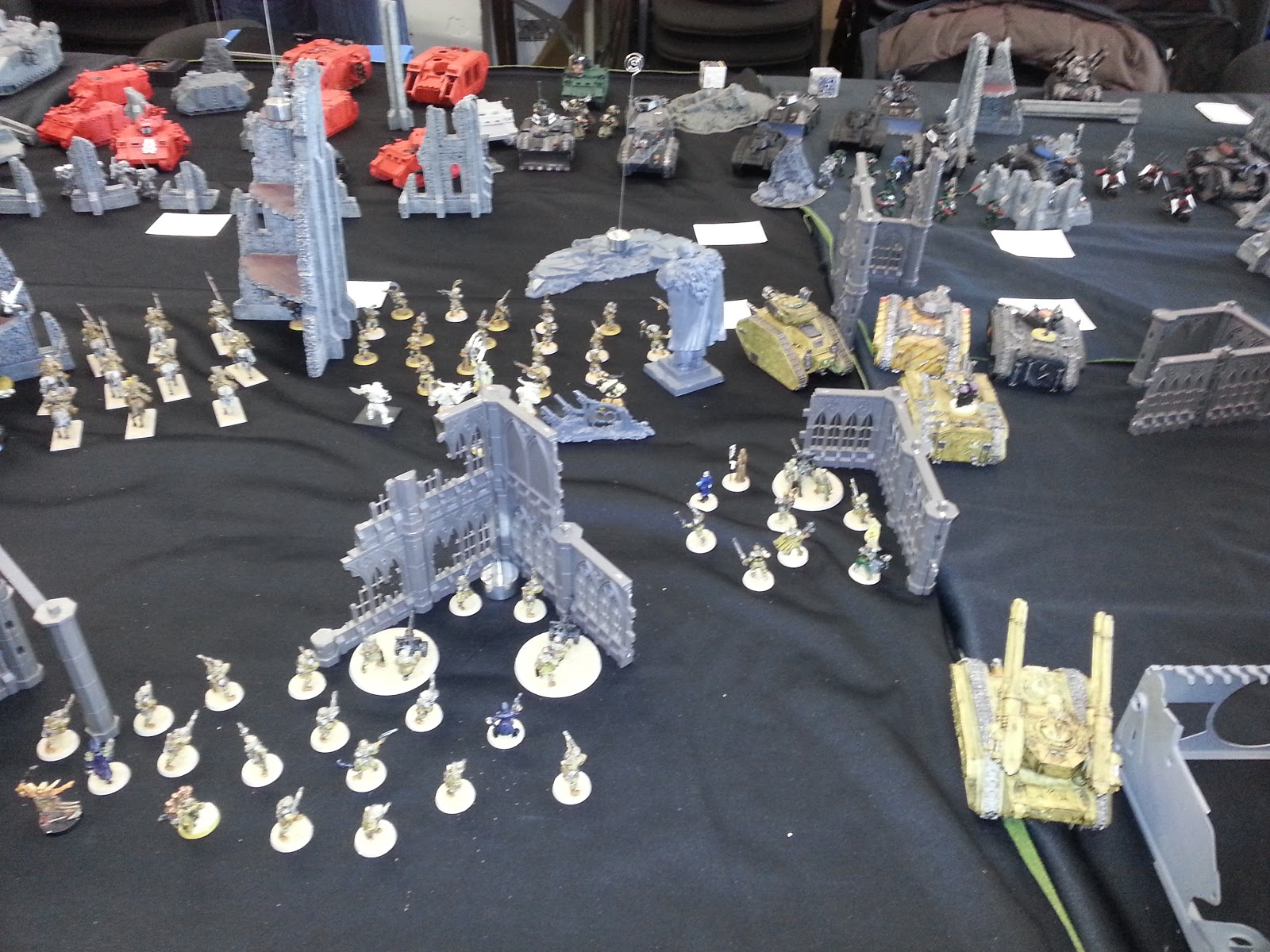 These are just my personal observations, and your own experiences may vary. All I can re-emphasise is to keep on playing games and trying things out!
Posted by The Responsible One at 22:20 2 comments:

5th Platoon of my company was ordered to advance into no man's land with heavy support from the available armoured units. I was doing as ordered and was on schedule when my forces were engaged by an unknown force of power armoured marines. I have since been informed that the warriors in question are actually a loyalist chapter called the "Sons of Tyr".

I am afraid that I cannot give much of an account of the incident myself as the first action of the matter was a perfectly timed and executed decapitation strike by drop pod on my position. Despite the heroic efforts of my seconded medical officer (whose name I have forgotten, but I would wish to recommend for a posthumous award of some kind - can someone senior pick something appropriate?), I was rendered unconscious by a hail of bolt gun shells.

The medical recovery teams have done an excellent job, and my force only took 97% fatalities from the 100% casualties inflicted by the excellently co-ordinated assault of the Sons of Tyr. Apart from whoever was responsible for their briefing, I would commend them as an excellent force to face the vile renegades and xenos we face in this sector.

I shall forward the requisition for further secondment of troops to my company, additional armoured support and specialist troops under separate cover once I have recovered. Once again, my heartiest complements to the medical staff who tell me that I will be back on active duty shortly, with only a few more bionics.

Administratum additional report into loss of war materiel
To be appended to friendly fire report form
Restricted access: Not for viewing by field officers
To: Segmentum Tempestus High Command

Once again, I find myself writing an investigative report into Captain Rafiq's loss of another platoon. To the dismay of many, the investigations have found that this loss is genuinely not his fault - unlike the platoons lost to his 'disagreement' with a Wolf Lord of the Space Wolves Chapter, which has led to the sector wide prohibitions about engaging in drinking games and / or insult contests with members of that Chapter for officers of the Imperial Guard, stemming from the unfortunate 'cultural exchange' incident that has led to Captain Rafiq being constantly "accidentally" attacked by members of the Space Wolves.

The Sons of Tyr, a successor chapter to the Raven Guard, with strong stylistic similarities to the Space Wolf chapter, engaged the Tallarn XVI on the mistaken belief that they were renegades. The Librarian who led their force has been exonerated as it appears that a enumerator servitor made an error in transposing the co-ordinates for both the Tallarn XVI and the Sons of Tyr's assaults into no man's land.

It is unclear whether this is due to one of Captain Rafiq's many, many enemies among the Imperium acting in a treacherous manner, hostile enemy action infiltrating the command chain, or simple technical error.

The influence of Captain Rafiq's father means that the matter will, as usual, be quietly dropped. Please fill in the usual forms and complete the necessary requisitions to get him back out onto the front line as quickly as possible, and hopefully he will be a little less lucky next time.

Posted by The Responsible One at 12:53 No comments:

Despite a merciless bout of light manflu that left me close to Satan in temperament, which meant I didn't go in to Darksphere for their monthly painting day on Sunday, I still got a whole bunch of stuff done!

I have been working on a test figure for an Imperial Beastman, to use the Penal Legion rules... I'm also photographing that for a step by step of what I did and how it went.

Here's a teaser for that: 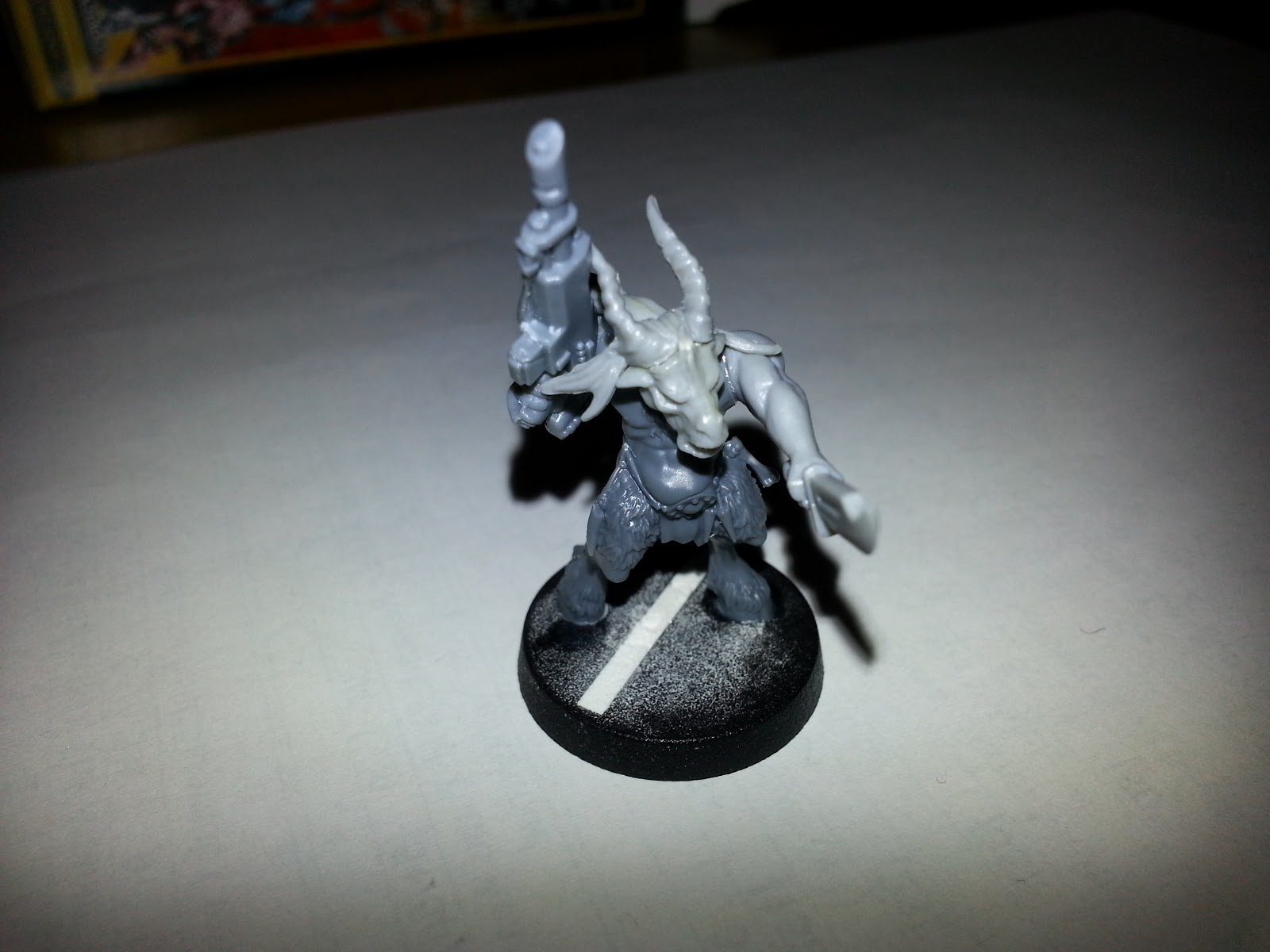 I also finished cleaning up my Wicked Dolls ready for painting, started work on prepping a Vindicare for painting, done most of the green stuff work done for the Herald on Disc (wife is about to help out with a tricky bit), undercoated some cultists for a commission for the wife, and assembled a Sarissa Silo (pics to follow when I've fixed the bit I've already broken)...

Next Sunday I'll be rocking over to Darksphere for their Apocalypse game. I should really write up my list for that...

I also hope to write up a little more of the creative writing over the army background of the Tallarn XVI soon. I am rather excited about sharing the story with people, although it doesn't really enthuse folk as much as rumours or interesting models do...
Posted by The Responsible One at 23:53 No comments:

Zaphod over at Masterminis is still trying to up his blog traffic by prize giveaways...

The latest one is that if you follow the instructions on his blog, you enter you (and me) in a chance to win a copy of Dark Vengeance each...

{in my best Godfather-esque accent}

"So go and talk to Zaphod, and tell him I sent you. It will be a thing that is in your interest and my interest."
Posted by The Responsible One at 10:36 No comments:

Email ThisBlogThis!Share to TwitterShare to FacebookShare to Pinterest
Labels: other blogs, Warhammer 40K

Inspired by the wonderful work by Colonel Scipio, Headologist, and Zzzzzz, I got inspired to write some fiction about the recent battles I've been having and the regiment I've been collecting. There is more to come!

Upon receiving your orders to investigate the whereabouts of Lieutenant Sufyan's platoon, which had not returned from their standard clearance patrol. Investigating their expected route, we found an area in the lower east sub sector which was the scene of a conflict.

A storage building for the nearby light agriculture had taken a direct hit to its generator through one and a half feet of plascrete. The burn marks would match those caused by a close ranged shot from a melta gun. A dead guardsman from second squad was found in the lee of the building on the opposite side to the door, and the charred remains of the three Ratling auxilia seconded to Lieutenant Sufyan's expedition were a short distance to the north.

Our medical officer informs me that one of the three abhumans had suffered a broken leg, which would be explained had they jumped from the roof of the building. No other bodies were found, either of assailants nor the missing platoon.

To the west of the building, the wrecked remains of the command Chimera were found. The remains of the crew were within, but not the passengers. The APC was destroyed with a single well placed anti tank shot, probably from short range.

Given Lieutenant Sufyan's exemplary record, it is most likely that he encountered an unexpected overwhelming force. The unrecognised weapon pattern, minimal number of deceased (and all those killed were killed by explosive force) and lack of enemy dead indicates an enemy raiding force who wished to conceal their presence, probably of Xenos origin. It is unlikely that our expected renegade opponents were responsible for the losses.

Recommendations:
The records of those whose bodies were found (dog tags attached) should be updated to indicate they were killed by enemy action.
The records of Lieutenant Sufyan's platoon (appendix attached), less those known to be deceased, should be marked as MIA, with a note indicating that should they be found, further investigation be made as to their reasons for not making contact with Imperial forces sooner.

Goals from last month
Failed. Progress only really in the Imperial Guard, basing the Conscripts.
Failed. Marionettes have started painting, but that's about it.

Failed. Not looked at. I'm a terrible friend.

I did, however, manage to finish tidying my study, leading to me earning my 40K rulebook from Sim!

Gaming and some first thoughts on 6th Edition

Also, rather than have our local youngsters demand money with menaces from us on Halloween, Sim and I popped down to Darksphere for the casual 40K night.

I did not take photos. I fail as a blogger.

While my wife had the local cheese weasel (he'll be proud for me to call him that) show her the terrible things Grey Knight Henchmen can do at 500 points, I managed to grab a nice chap called Louis when he finished his game for a quick 1,000 match up.

Louis plays Raven Guard successors, using Space Wolf codex rules. He had a Rune Priest, a couple of Grey Hunter Squads (one in a drop pod), some Long Fangs, a Dreadnought and a Speeder. Tons of lovely kit bashing, which readers will know I'm a big fan of.

I took a trimmed back version of the normal list, with a small company command squad, a psyker, infantry platoon, Veterans in a Valkyrie, a Demolisher and a Hydra.

The mission was "Big Guns Never Tire", with standard deployment on a 4 x 4 board.

I was thoroughly schooled, with the opening turn being an absolutely canon perfect decapitation strike by the Drop Pod squad, coming in behind my lines to obliterate my Warlord and wipe out his squad with brutal short ranged shooting to earn Louis both First Blood and Slay the Warlord.

I won't bother with a blow by blow, but it ended with all my models on the table dead while the Valkyrie was off turning around. I learnt some useful lessons, however!

- The Imperial Pie Plate still scares the pants off anyone in power armour.
- Tanks can be more reliably taken down this edition, but can still be useful and dangerous
- Fliers are really useful, but Valkyries with MRPs are less good given the new flying rules - should focus more on using as a transport and less as a gunship. Also, may want to consider looking back at the standard one shots it comes with
- Hydras are dead good on skimmers and fliers, but at smaller point games may not make their money back
- Plan your flier movement from the start, so you have a good idea of where you're likely to go
- My current list still suffers from power projection issues - it doesn't put enough threat across the table fast enough
- Cover is still useful, even if its a lower number - your opponent has the same issue too
- Focus on objectives - while I was still wiped, I could have put a more credible threat out earlier on

I have been selling bits and pieces on ebay, and thus had a little money to spend on bits on ebay too.

I realised a short while ago that my Imperial Beastman conversion was hamstrung by a lack of left arms (cursed lack of forward planning!) but a good mate mailed me more than I needed to complete the project in exchange for a couple of Cadian torsos for him to test out one of his projects.

I also picked up a couple of sprues of Glade Guard, which still had five hooded heads on! Woo! These are hard to find cheap. The remaining bits that don't fit guard have now been passed on for my wife's bits box.

I've also bought a few Dwarf Warriors to see if an easy Squat kitbash is at all feasible. I am somewhat doubtful. I'm still waiting for these to arrive, though.
Posted by The Responsible One at 22:29 No comments: