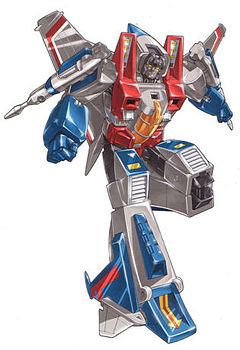 The background to the question

So, there's been quite a lot of rage on the internet recently about the Black Legion Codex release, which stems back to the belief that Chaos Space Marines need 'fixing' as a troop type. This belief stems from Chaos Space Marine Leadership.

The perceived problem is that with normal leadership and no special rules, such as "And They Shall Know No Fear" or "Fearless", Chaos Space Marines run away too much, particularly from lost hand to hand combats when their unit leader is forced into a challenge he has no chance of winning. Icons are dismissed as being too easy to snipe from the unit, and Veterans of the Long War as being a simple Leadership boost without adding a special rule.

I'm not going to comment on the mechanical advantages and disadvantages of Chaos Space Marines, as while I have the Dark Vengeance set and I'm planning a few CSM allies for my Guard at some point, I haven't played them yet, so I'm not really in the best place to comment on the in game mechanics.

However, several people have said that this does not fit their view of the background and setting of Chaos Space Marines. Why would ten thousand year old veterans be 'less good' than recently recruited Loyalist Marines?

My take on the situation

The Leadership statistic represents courage and discipline. Loyalist Space Marines are psychologically indoctrinated and hypnotised into fanatical loyalty to the Imperium. They "Know No Fear" because they have been brainwashed. Even that aside, their bravery on the battlefield is about having a higher cause. Leadership checks the point where you are ensuring that your perfectly natural human reaction to flee a dangerous situation is being over-ridden by your desire to stick to the plan.

Chaos Space Marine cult troops (Berserkers, Noise Marines, etc) are Fearless because they are dedicated to a 'higher power'. They have subsumed themselves into another concept. Plague Zombies are Fearless because, well, they're zombies. Chaos Cultists are expected to run away a lot, unless whipped into line by a suitable agitator.

So, why do "normal" Chaos Space Marines run away?

It is because they are evil.

This is actually a deeper statement than it first appears. The point of a Chaos Space Marine is that they have overcome their original training, loyalty and conditioning to a 'higher cause' (the Imperium). Instead, they have taken a more selfish, personal path to power.

The key word there is selfish. Chaos Space Marines are not the sort of people to lay down their lives for a cause - if they see things are going badly, they will quite likely start doing their own thing, which is likely going somewhere safer. Renegade Chaos war bands are not places you are likely to see loyalty to the bitter end and self sacrifice for some higher cause.

In short, in the case of a Chaos Space Marine, or even a Veteran of the Long War, their willingness to give up and flee is nothing to do with how skilled they are. It is their self centred nature to want to continue existing, even if it is at the expense of some superior's plan or the course of some battle. They have had ten thousand years to plot revenge in some cases - so why throw that away for the sake of a battle plan that appears to have been conceived by a twelve year old child (because sometimes, it was)?

From a setting perspective, the Chaos Space Marine stat line is perfectly fine. The real question is about game balance and points costing. I think, for Games Workshop, at the moment that takes second seat to 'Forging the Narrative' - and the scores of treacherous little mini Starscreams in power armour are doing that just fine.
Posted by The Responsible One at 20:49 11 comments:

A week of some progress - Old memories and a painting class

In order to accommodate a guest, I needed to move all my stuff out of the spare room last week. This led me to a not inconsiderable amount of surprise at the number of boxes I had with things in them that I wanted to keep.

I also finally found my Forge World resin Baneblade, which I bought probably over a decade ago now. It is an effectively instruction-less kit (it definitely will be if I can't find the papers it came with), so that will be an adventure, And No Mistake.

How do I lose a Baneblade? 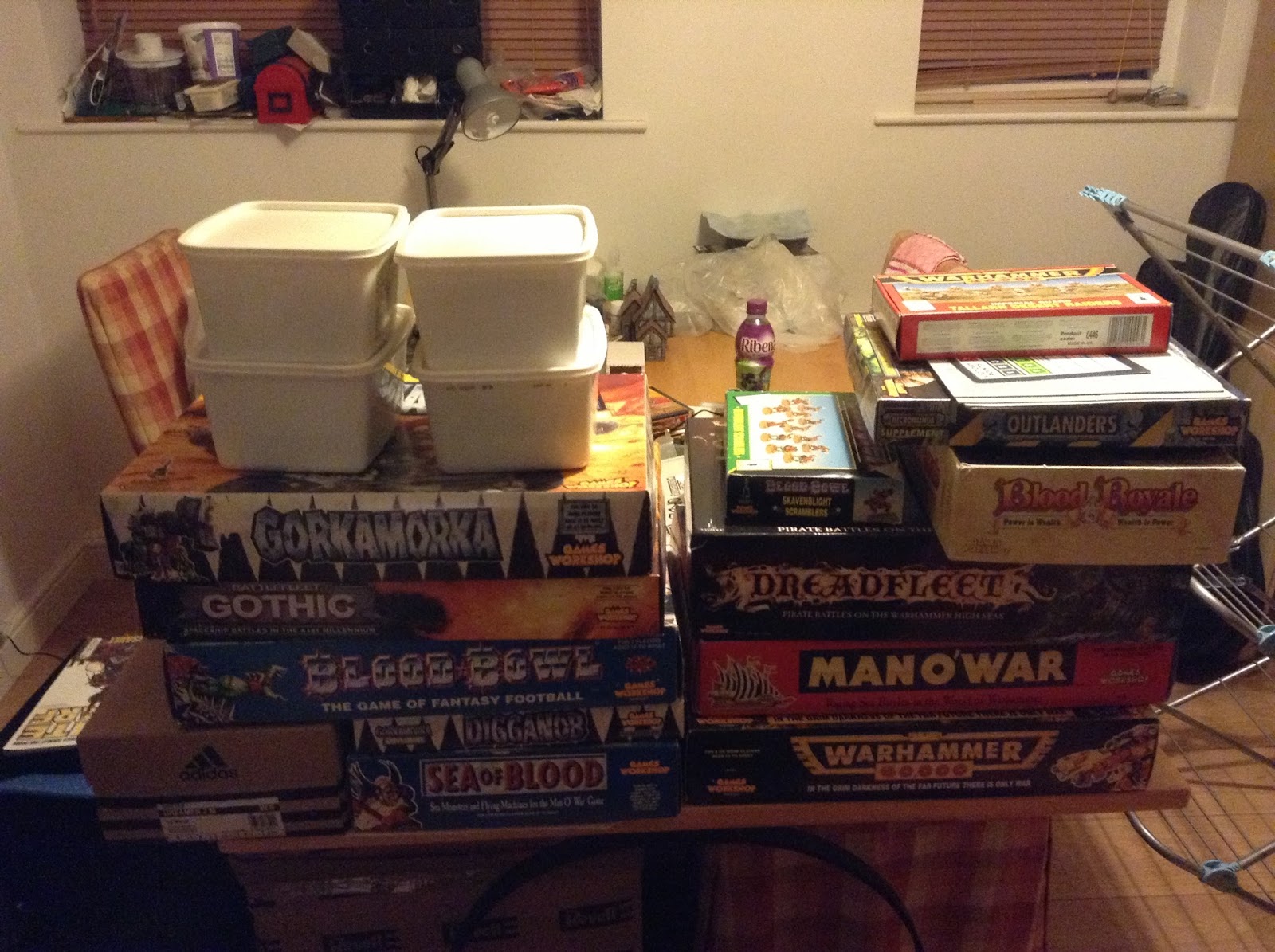 This (less the Dreadfleet box, which I brought down at the same time) is what it was hidden under. The shoe box and the ice cream tubs contain cardboard scenery, epic plastic ruins, Heroquest models and a few other surprise delights.

The Sea of Blood box includes all the Plague Fleet contents as well. My parents threw that box away at some point while I was storing my stuff there to consolidate boxes. I weep for how much that took off the value of the entire lot, even if I have no intention of selling any of it right now.

On Sunday, I got to escape the house to travel with my darling wife up to Leisure Games, where she was teaching a painting class. I went up with her, as we didn't know the numbers and she might have needed some help, but it turned out to be a pretty small class so I got to sit in the corner and get caught up with my own stuff. 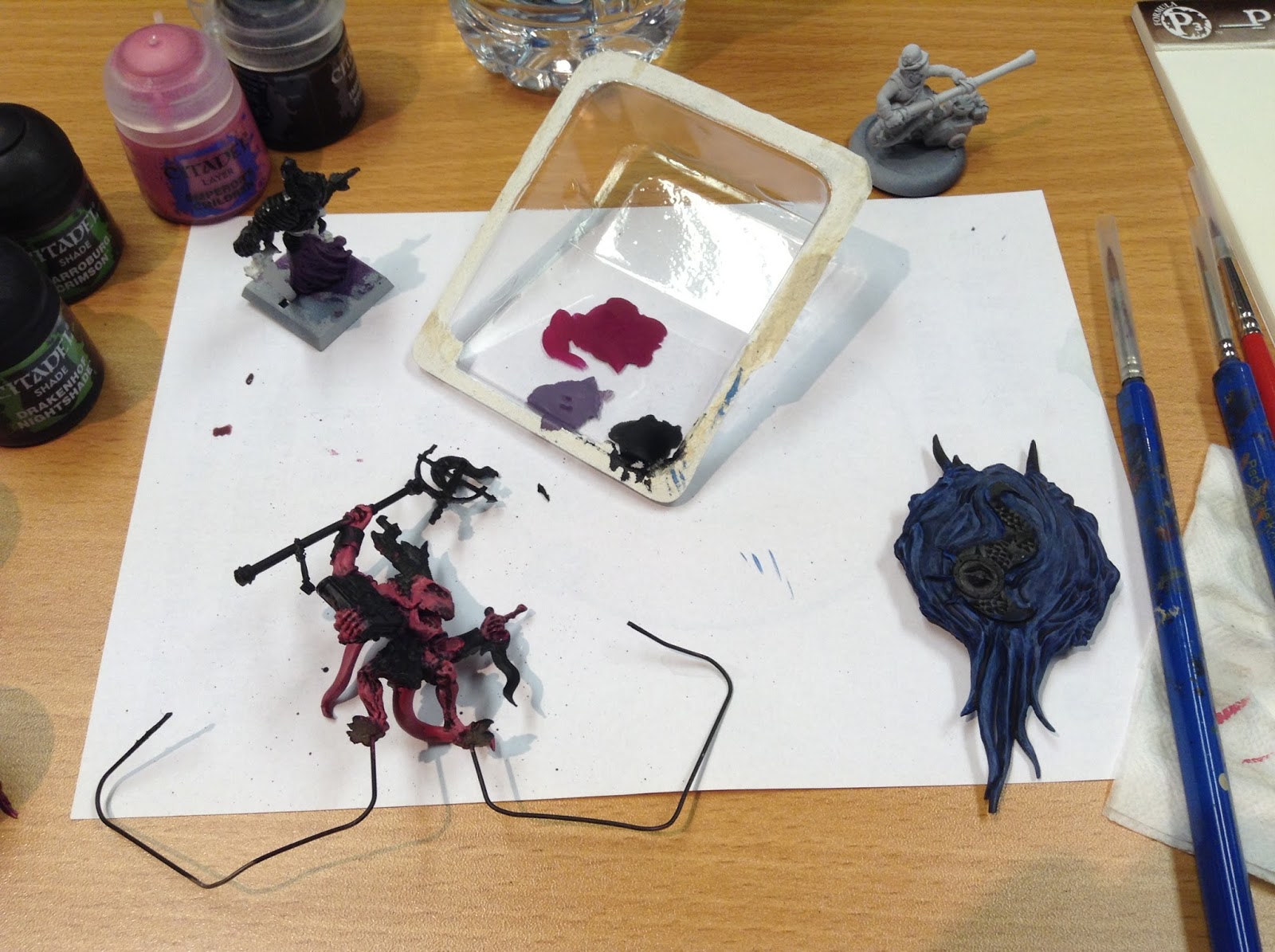 So, here's the day's progress! I didn't paint constantly - I can't keep my attention on it that long - so I ambled around the shop every now and again as a break. 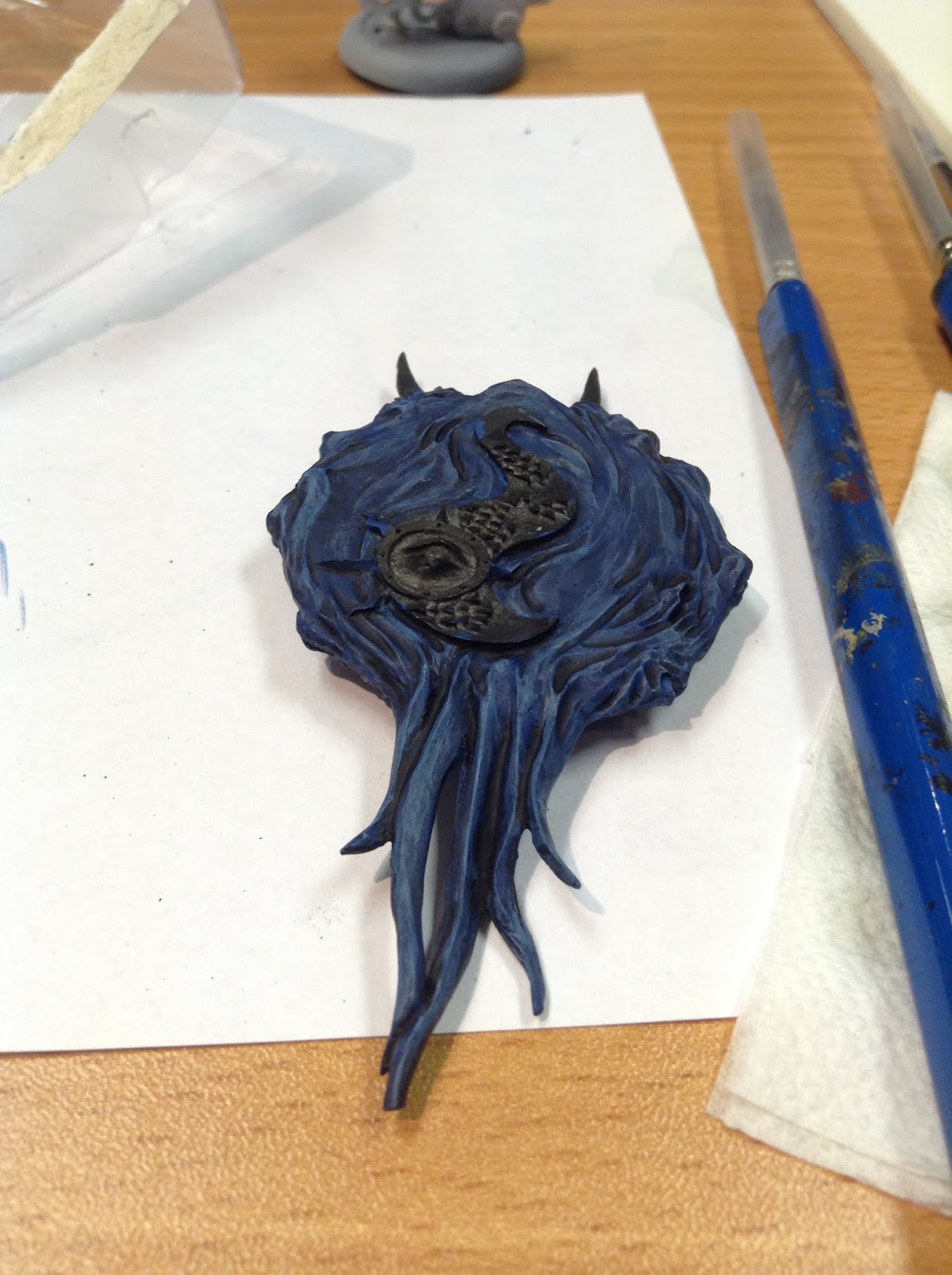 This is the disk I'm painting for the Tzeentch Herald. What do you think? This is a base, a wash, some blended lighter blue, then another wash. Sim thinks I'd have been better off drybrushing rather than wet blending, but I do also kind of like the effect I've got. I'm going to be building up the contrast towards a blue grey in time either way, but was curious as to other people's opinions. 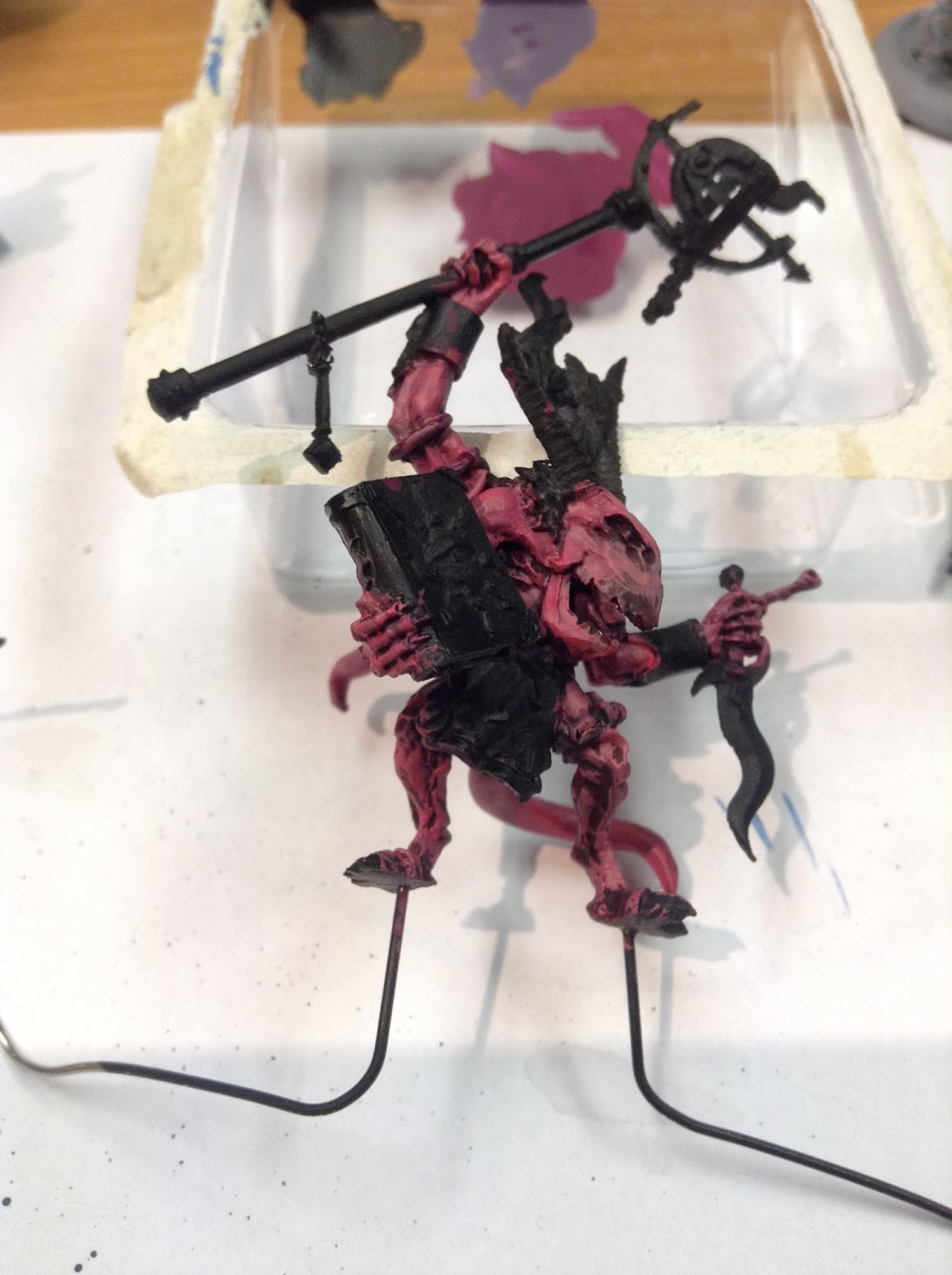 Here's the Herald himself. This is using the colours from the relevant demon-related White Dwarf, with base, wash, and first layer starting to be added. It's still really quite rough at the moment and there will be a lot of smoothing on the blending. 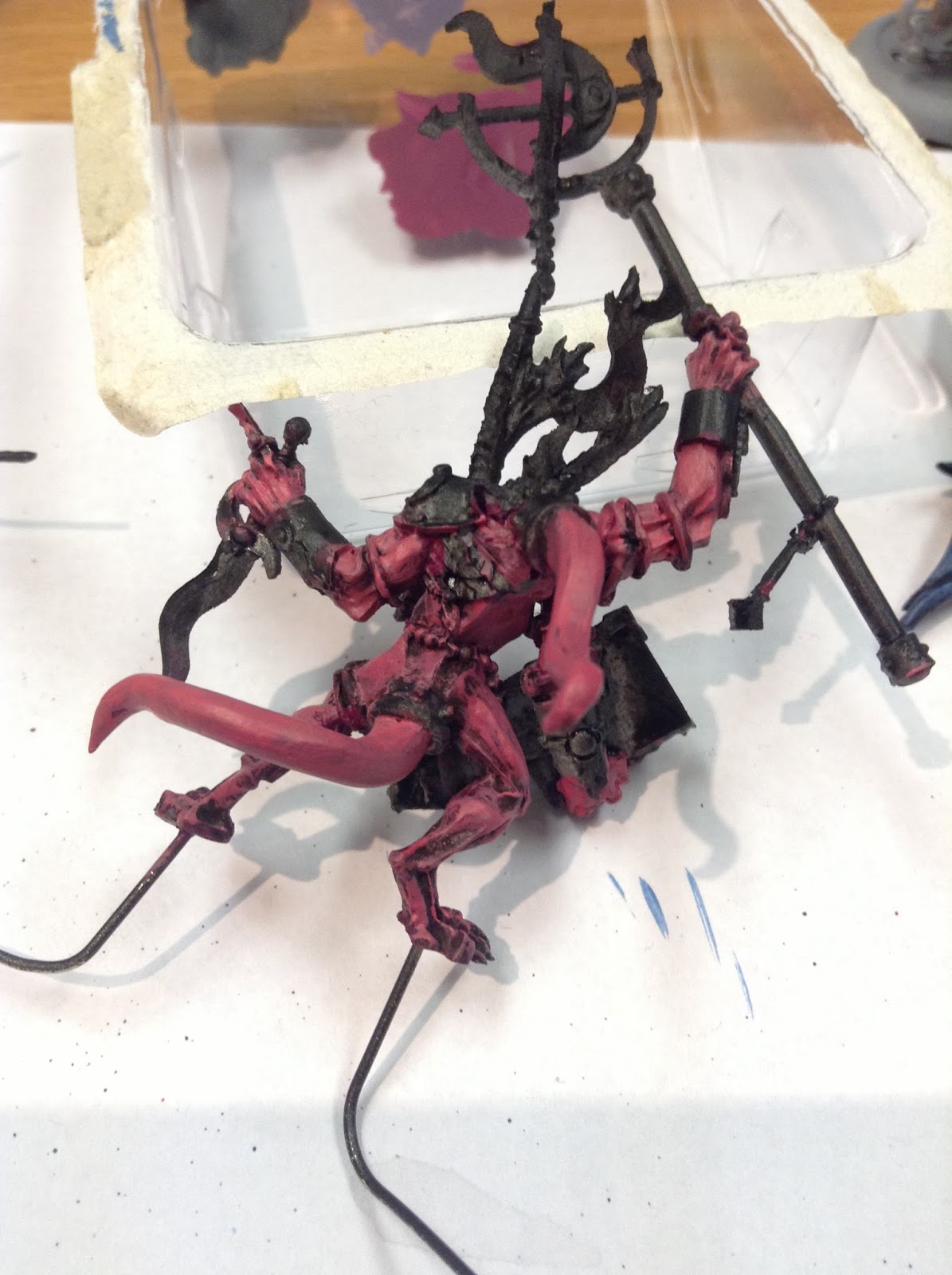 The tail has a nice smoothness to it. I want to add a little contrast, but I also kind f like how it's looking as it is. He's an odd little beastie. 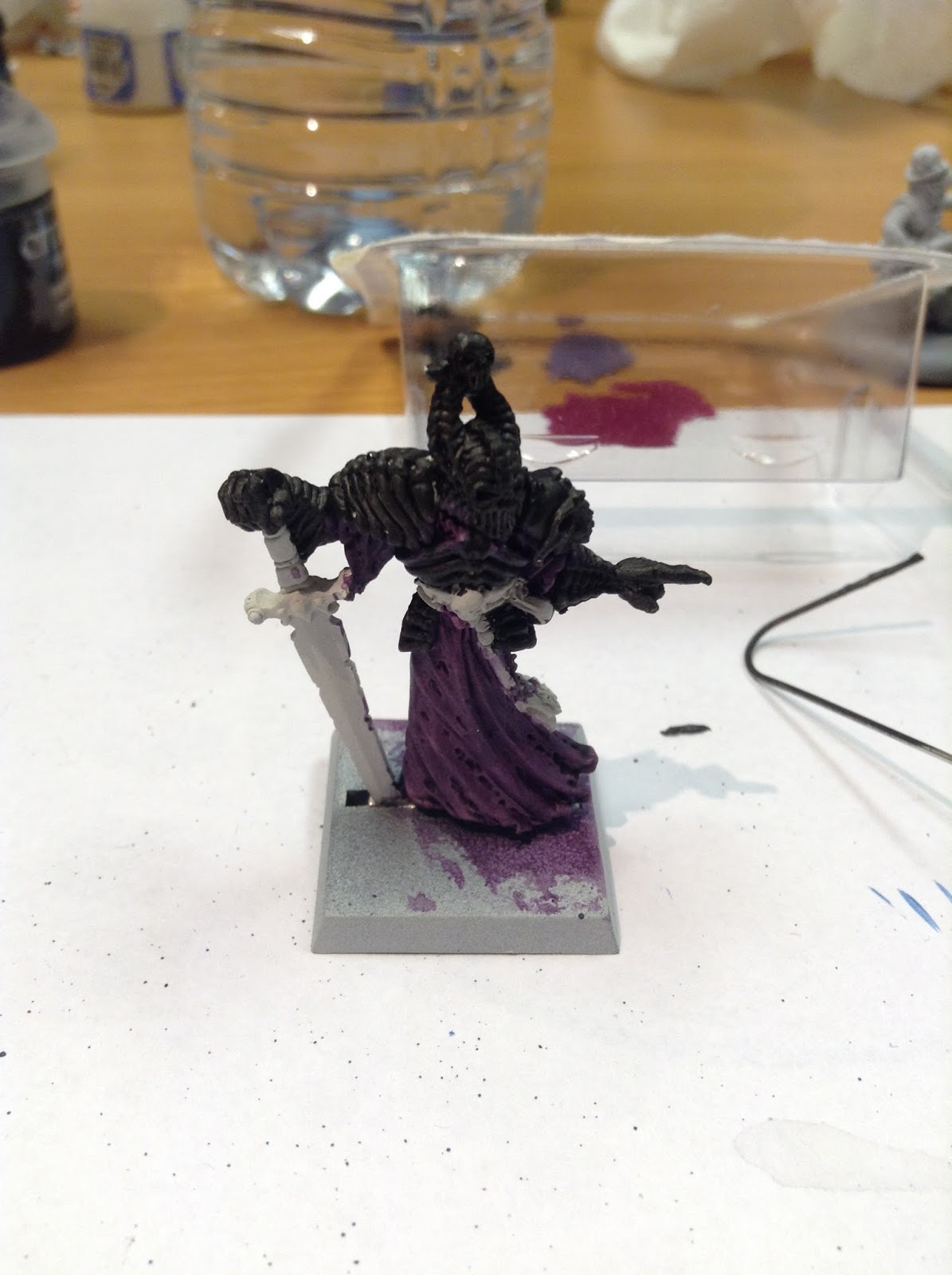 Here's a chap who is going to be a Slaanesh unit champion in my new Warriors of Chaos army. I'm trying out a technique from the 'Eavy Metal Masterclass book for the bone, hence it having been painted black when I don't usually use that as a base. He was white undercoated, and I've done the base and was on his robe. 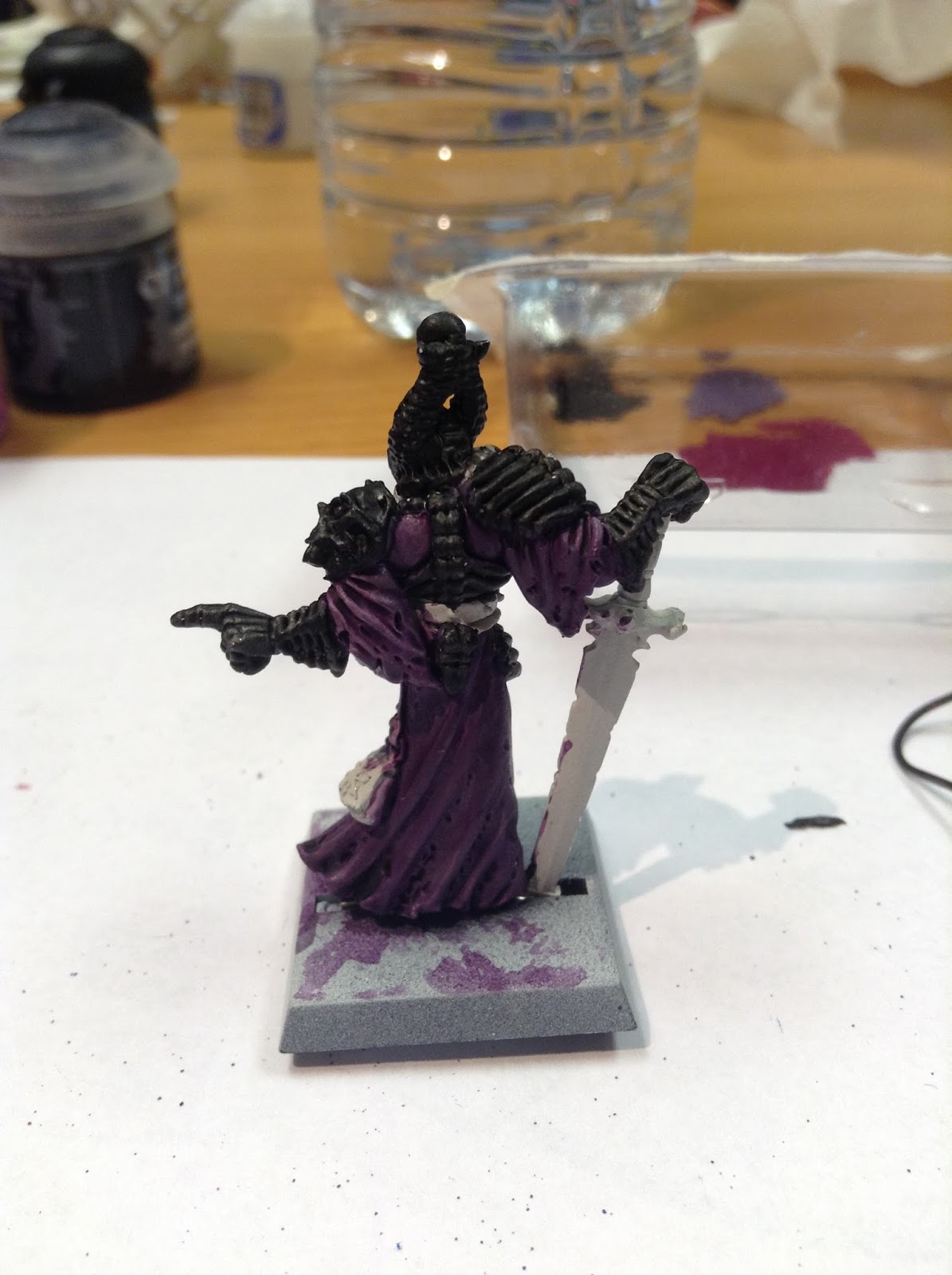 Here's his back. I love the tattered cloth on this old model - it's a really good look at takes the wash brilliantly. I'm currently planning on spending quite a bit of time on this chap and entering him as my Golden Demon entry this year.
Posted by The Responsible One at 20:36 2 comments:

So, my wife is ambitious...

It's been a slow week on the hobby front for me. I have been set deadlines about clearing up the spare room by my dearly beloved, so instead of assembling and painting miniatures, I've been lugging my old junk around the house, throwing out or ebaying as much as I can. Maybe I'll find the Forge World Baneblade I know I have somewhere in the house!

As some of you may remember from an old post, Sim's hobby progress had stalled for a while. However, there has been progress! The chaos cultists are finally done and out of the house - but there was so little time between them being completed and them leaving the house that I took no photos! There is only the empty space where they once were: 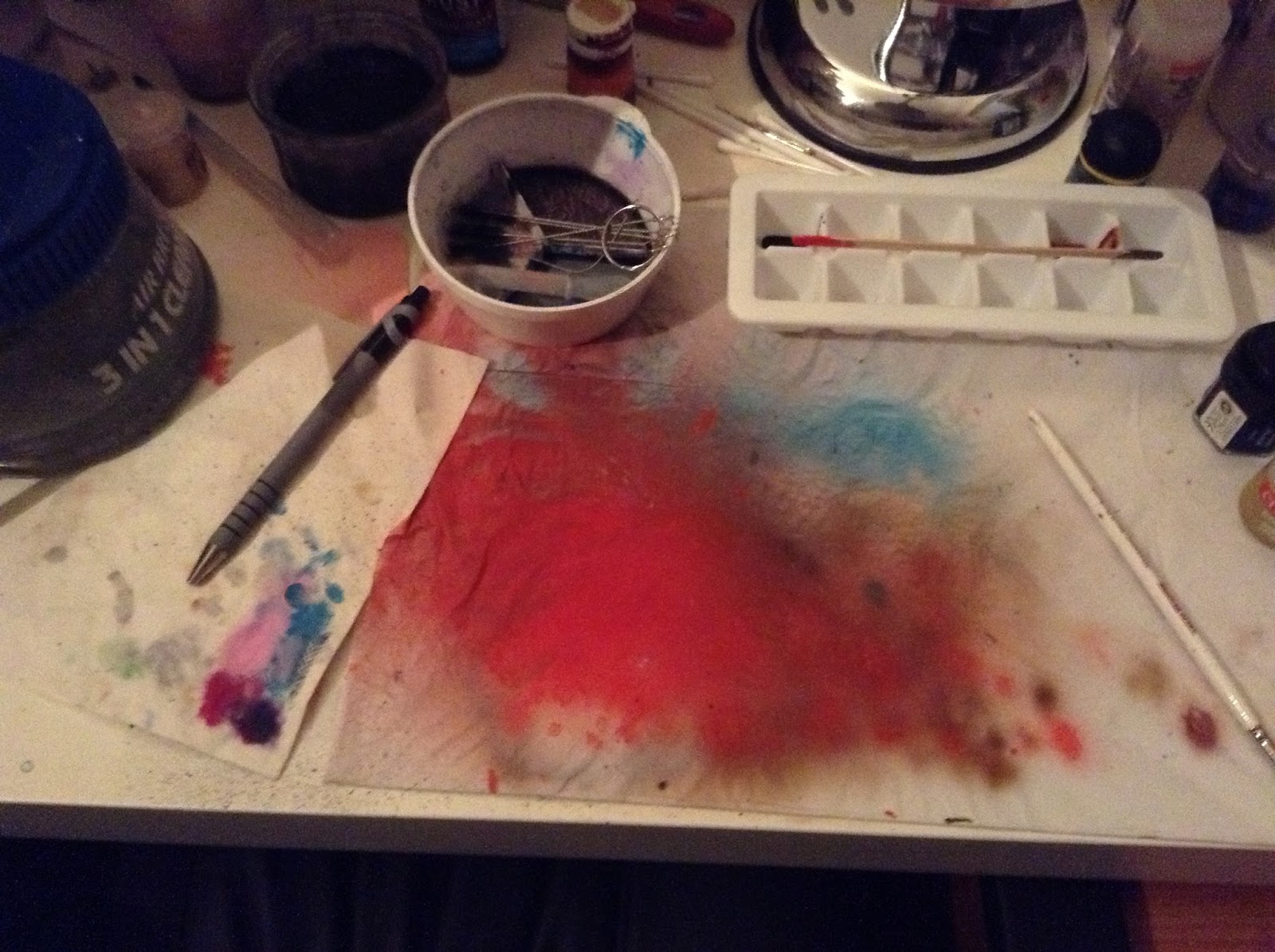 And yet, our house guest left something else in its place for her to assemble and paint... 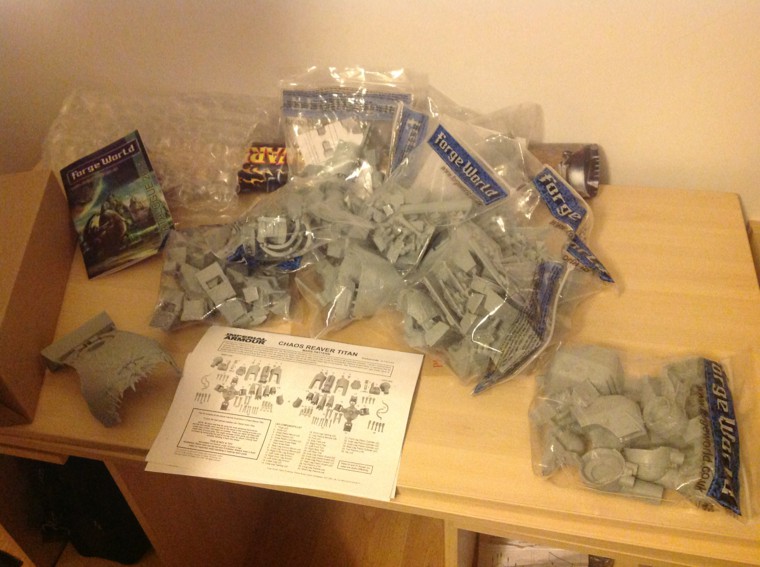 In order to ensure that she stays on schedule this time around, I will be posting regular update photos. Or lack of update photos, if its not going well. I believe she's aiming to get this all done by December, as well as a couple of death cultists and a pair of super heavies which are yet to arrive...

This is all very frustrating as I am super motivated at the moment, but I absolutely must get the spare room cleared before our guest arrives on Friday. Hopefully, my motivation on painting and modelling will survive past the point of me being stuck using all my free time doing something else! (And no, don't be too sympathetic, I was told months ago this needed doing...)
Posted by The Responsible One at 21:58 5 comments:

Email ThisBlogThis!Share to TwitterShare to FacebookShare to Pinterest
Labels: Painting, This week, Wife

A bit of a fan moment about Arcworlde 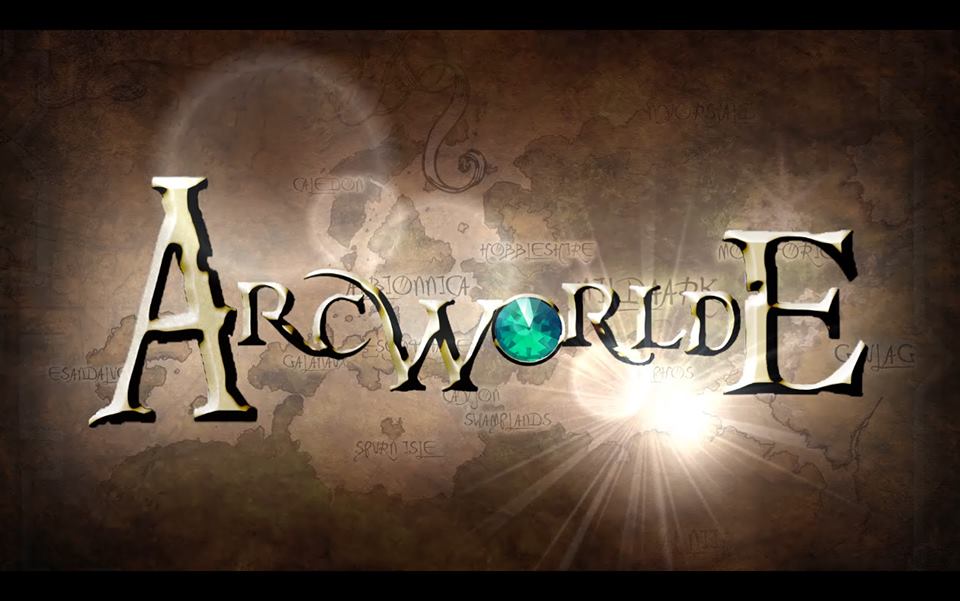 Some of you may recall I bought a couple of Arcworlde figures at Salute this year. I'm definitely a fan - and given the young lad doing all these sculpts is only 20 makes it even more remarkable.

Warploque Miniatures has just started their Kickstarter for Arcworlde, and I'm already in. As is the way of things now, I've made sure I'm in for a second warband so that Sim can play too. She's bagsied the Undead Pirates incredibly quickly - I'm considering the Bayourks myself.

I did get sent a copy of the playtest rules, and it definitely looks quite interesting. Sadly, I never quite found the time to test out a game, but I did have a quick proof-read and sent back as many helpful comments as I could about bits I found unclear. These were happily few and far between - it was already looking like a slick, professional production when I received it!

In an effort to 'kickstart' my stalled painting progress, I dug out the little swamp critter I'd picked up at Salute and promised myself to do the next stage in his prep and / or painting over the weekend for each one of the household chores I completed.

This was sadly delayed as I realised that the MicroArt Studio bases I'd bought for him didn't really have much space to actually fit a figure on - and certainly not one that had a lot of flat contact with the ground. I actually had to dig through my basing kits to find a suitable thin flat piece of stone to bring part of the modelled detail up to the level where he rested flat on the bases at all.

Also, since I bought those bases, Warploque took the decision to use round bases for their models, but I decided to press ahead anyway, and work with what I have! 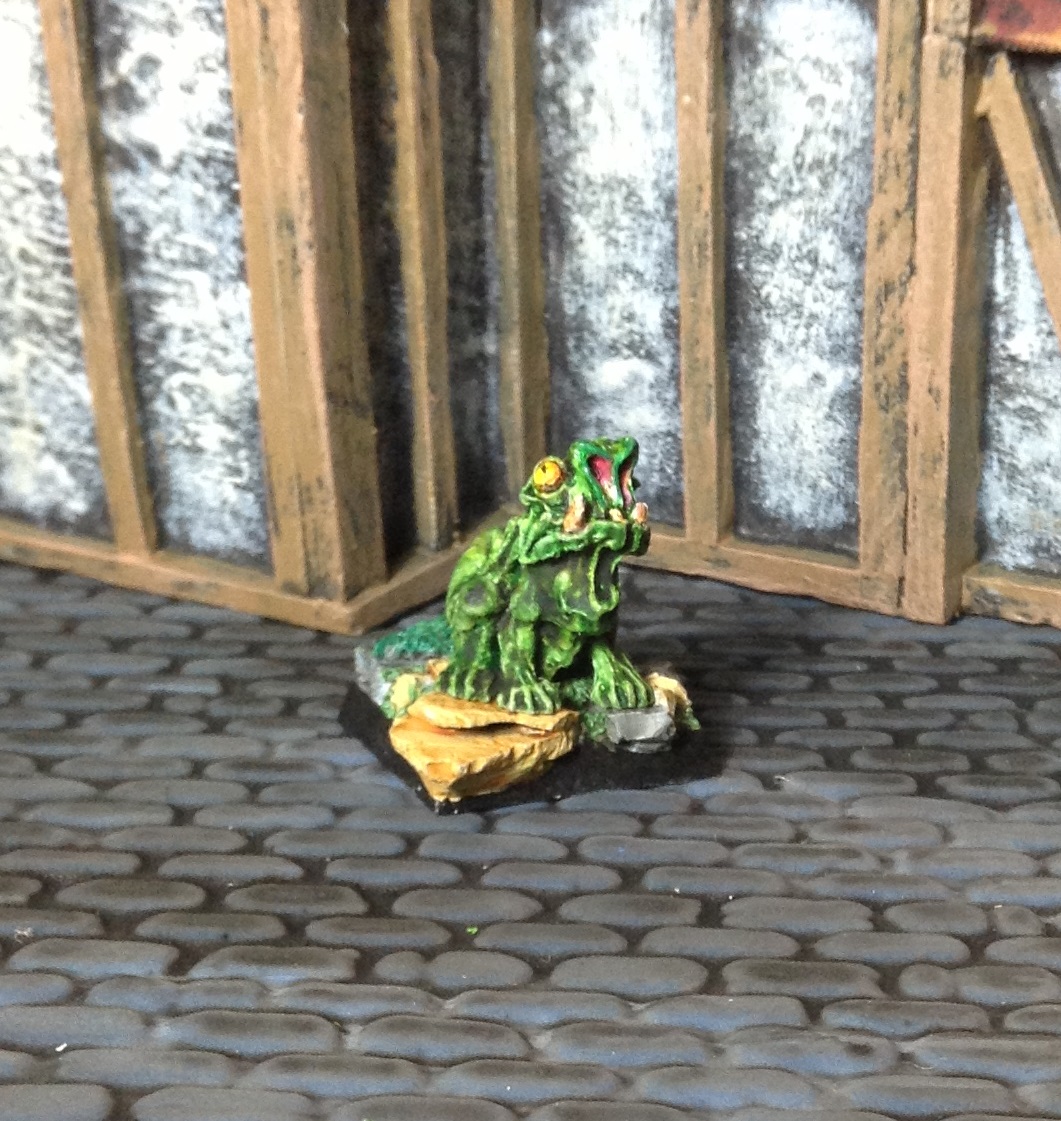 Isn't he the most adorable little thing? I painted him in a very short space of time, so I know he's not exactly display standard, but I think he's lovely. 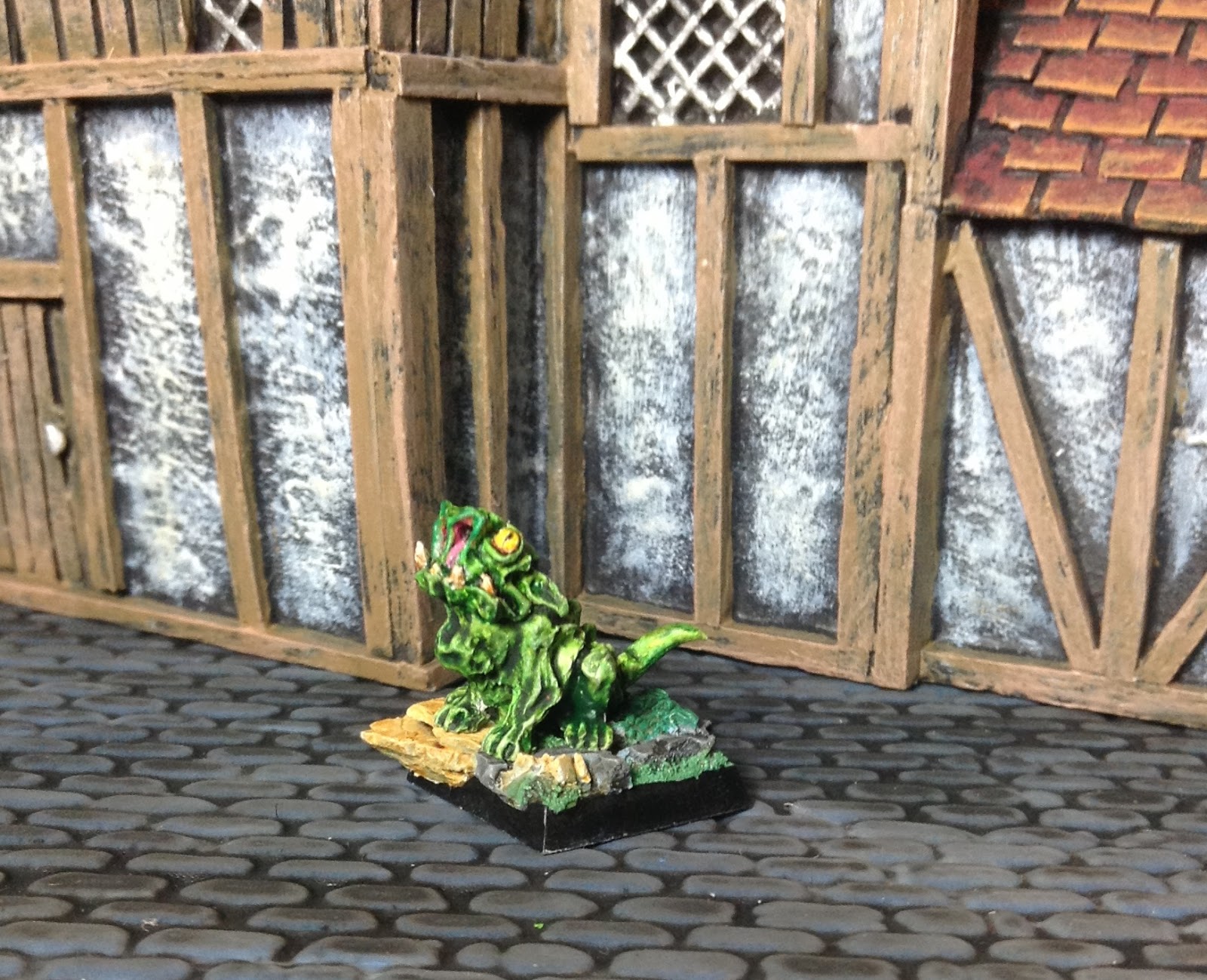 So, to re-iterate, please go and back the Arcworlde Kickstarter so this poor lonely chap can have lots of new friends to play with!
Posted by The Responsible One at 20:39 No comments: