Once again, I've been super busy working at the day job which has been getting in the way of Actually Painting Models.

So, once again, I've been paying other people to paint my models. For this commission, I've used Siege Studios.

In a "Responsible One" blog first, there's a video of my models! Obviously, this is courtesy of Siege Studios, as I do not have the camera skills to produce something like this.


I paid for the "Bronze Level" with these models, and I'm really happy with how they've turned out.

Sadly, this wasn't a completely pain free commission. There were some delays, due to perfectly understandable reasons - and I have no problem with those delays, as there was no rush on these models getting done.

Unfortunately, the communication around those delays was not very good at all. Given this was the first time I'd used Siege Studios, this made me rather nervous! Several times, I needed to chase for an update. I'm more understanding with one man band operations being a bit lax about e-mails, but I expect a bit of a higher standard a studio with a slick website and a stall at Salute.

That said, this feels like teething troubles from expansion rather than anything fundamentally wrong. The prices are reasonable, the quality for what you pay for excellent.


I mean, just look at the freehand banner on the Britanan Colour Party here! It is really clean and neat. I did a little happy dance when I unwrapped this chap, and I'm sad I don't currently have anyone to play against until my wife assembles and paints her force.


Here's the whole force together. Don't they look awesome?

All in all, I don't regret sending these chaps to Siege Studios. While the communication delays were stress inducing and infuriating, the end product is excellent.

In particular, I will be giving them another chance in the future, when budget allows. That's probably the best indicator for any painting service!

If you like the Britanan models, you can get them from Tor Gaming here, though your local store may also stock them.

Posted by The Responsible One at 18:30 2 comments:

Herein follows a short commercial break for the blog "The Lost and the Damned and the Stunted".

Dai posts regularly, with a good number of painted models which puts my lackadaisical progress to shame. There's a good bit of Oldhammer on there, which is one of the things which draws me to it.

Of course, my promoting his blog wouldn't be anything to do with some competition or other. I'm not the sort of person to make a blog post solely for a second entry into a prize draw! This must be purely chance, or something.

Posted by The Responsible One at 14:40 2 comments:

Email ThisBlogThis!Share to TwitterShare to FacebookShare to Pinterest
Labels: other blogs

A productive weekend not painting

I should really go and paint some models this weekend . . . oh dear lord! The dining room table, on which I paint, clearly needed a bit of a purge. Possibly with fire. 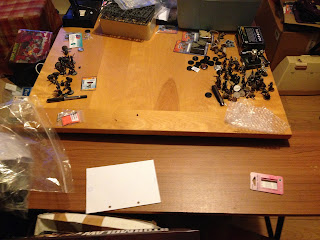 There we go, that's much better. This is, quite terrifyingly, all the miniatures that were lying around under other things on the table. At my darling wife's request, the plan is now to get out all the stuff I own which isn't painted to get a bit of a visual idea of how much of it there is.

There is probably an awful lot. I've already decided to try and cut down on the hoarding by getting rid of an assortment of bits and pieces I'm not really going to use in the foreseeable future. 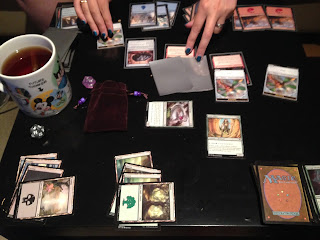 My wife and I also went to a Magic Beginner's Night at Dark Sphere, and inevitably, a couple of small purchases happened. There is, however, going to be a "no boosters" rule. Casual Magic is actually really quite good fun, and I loved the mental challenge of working out how some of the decks were supposed to work.

Also, I don't have to paint anything.
Posted by The Responsible One at 19:43 4 comments:

Email ThisBlogThis!Share to TwitterShare to FacebookShare to Pinterest
Labels: Magic: The Gathering, This week, Wife

As I've finally finished painting the Collodi starter box, I thought it was time to give Malifaux 2e a try. I arranged to pop down to Dark Sphere on a Tuesday night, where there's a thriving Malifaux community. It's also where you might be able to find some of the AbnorMALifaux crew, should you know the fell arts necessary to summon them. 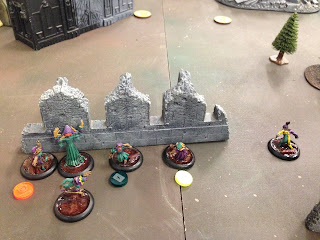 So, I can scrap together a 30 soul stone crew with every model I have painted and assembled. We draw Squatter's Rights (capture at least two of five markers for a number of turns) as the Strategy. You get to pick two Schemes from a randomly generated list of five. I choose "Frame for Murder" and "Assassinate". This means I've sewn someone important up inside the Wicked Doll on the far right flank so if the Gremlins kill it, the Guild will come down hard on the green scum - and meanwhile, I'm trying to put a bunch of holes in Somer Tooth Jones. Clearly he made a nasty comment that shows he didn't appreciate the culture of puppet shows...

NOTE: Assassinate was a terrible decision from a tactical point of view. I should totally have picked a different option. 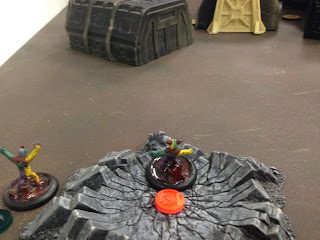 The coloured tokens you see are to keep track of which model is which, kindly loaned to me by my opponent. Here is my force of Wicked Dolls on the left flank.

A learning point: My opponent had some old metals too, and he'd taped replacement pictures over the relevant cards for his models. I may have to follow his lead... 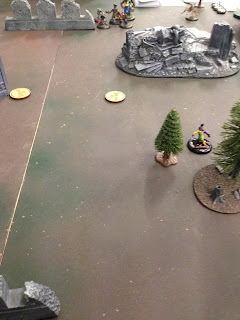 I start off running the Wicked Doll for "Frame for Murder" off on his own, making it look like he's aiming to take control of a Strategy marker on the weak side of the board. 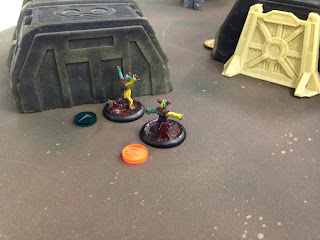 Meanwhile the Wicked Dolls potter up the left flank. Malifaux has you take it in turns to move a model (with a few exceptions, written on the cards themselves). There are beautifully painted Gremlins moving in response to these moves, but I didn't take enough photos... 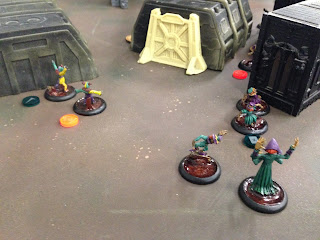 While Collodi and his Marionettes head up the centre. I'm already realising that Collodi has all sorts of clever "activate stuff in this order" nonsense which I don't yet understand. My hope of victory in this game is pretty slim. 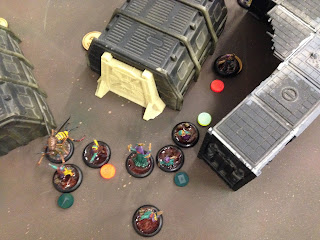 A giant mosquito buzzes over to cause trouble - I need to kill it because it has a nasty trick that turns off "triggers" - a type of power that you get with a really good card draw, that Collodi and his crew seem to have a lot of. 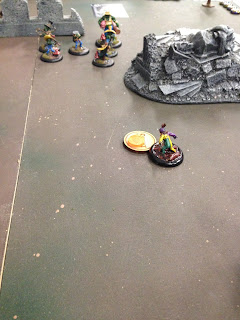 One of the Wicked Dolls claims one of the Squatter's Rights scheme markers. 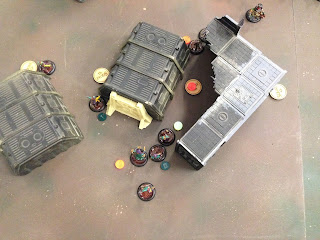 Mosquito dead, objective claimed in the centre, and Wicked Doll swung right out to the left to claim me some more markers. 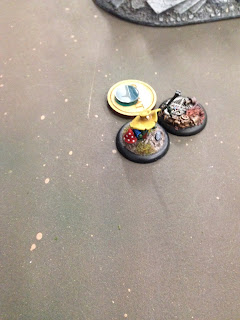 A Gremlin helpfully shoots the Wicked Doll into a pile of scrap, is Framed For Murder, but claims the Squatter's Rights Scheme Marker back. 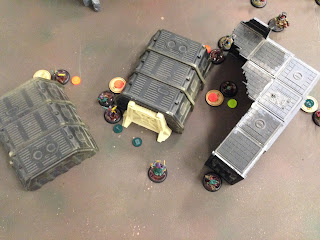 If yo look closely up towards the top you'll see a Gremlin in a fight with a Marionette, while I claim the two left hand Scheme markers. 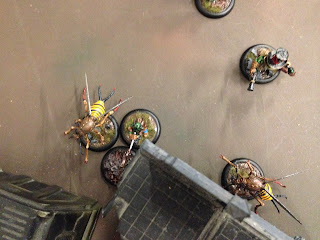 A Mosquito kills my puppet, and activates a trigger to make a new giant Mosquito. Nooo!!! 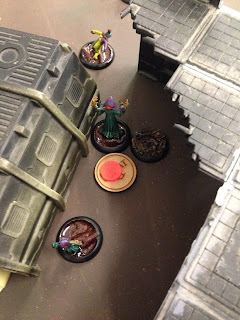 In revenge, I take the scrap pieces from the dead Marionette, and sew them up into a Wicked Doll. 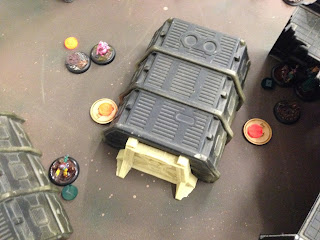 A piglet charges into a Wicked Doll on the left and reduces it to Scrap. Collodi is shot up by Gremlin shotguns and is running out of puppets to toss in the way. 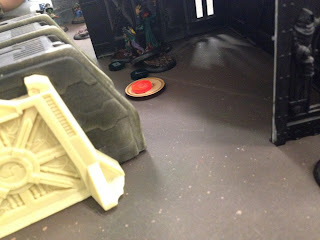 Eventually, I'm left cowering in the corner and a shotgun blast takes out everyone in a final shot.

Interestingly, the game doesn't finish at this point! You keep playing, and I'd scored quite a few points. My opponent was successful in scoring more than me to win the game, but it's interesting that you can lose all your models and still have a convincing win, as long as you have the right Schemes and Strategies.
Posted by The Responsible One at 21:19 No comments: 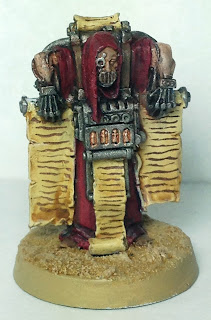 An Inquisitorial Warband is growing, slowly. Here stands one of the inner circle of the band, a Lexmechanic - perhaps now a little isolated from his machine cult brethren, and more loyal to his master, who bears an ancient seal of authority. 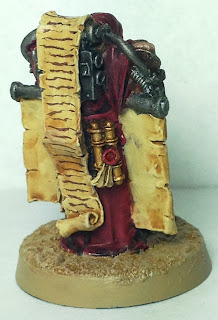 I tried the new Balthasar Gold paint on his scroll case, and was very impressed. It was easy to use with good coverage - much better than previous Games Workshop gold paints. 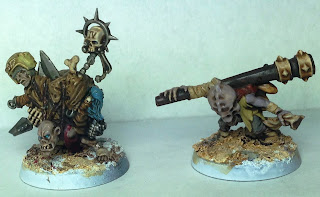 Meanwhile, here is a work in progress - two mutants - called "twists" by some low born. These expendable unfortunates have been drawn to the Inquisitor's service. It is unlikely they will live long, but perhaps they will gain some solace from their service.

It is unlikely that they will.
Posted by The Responsible One at 19:33 3 comments: