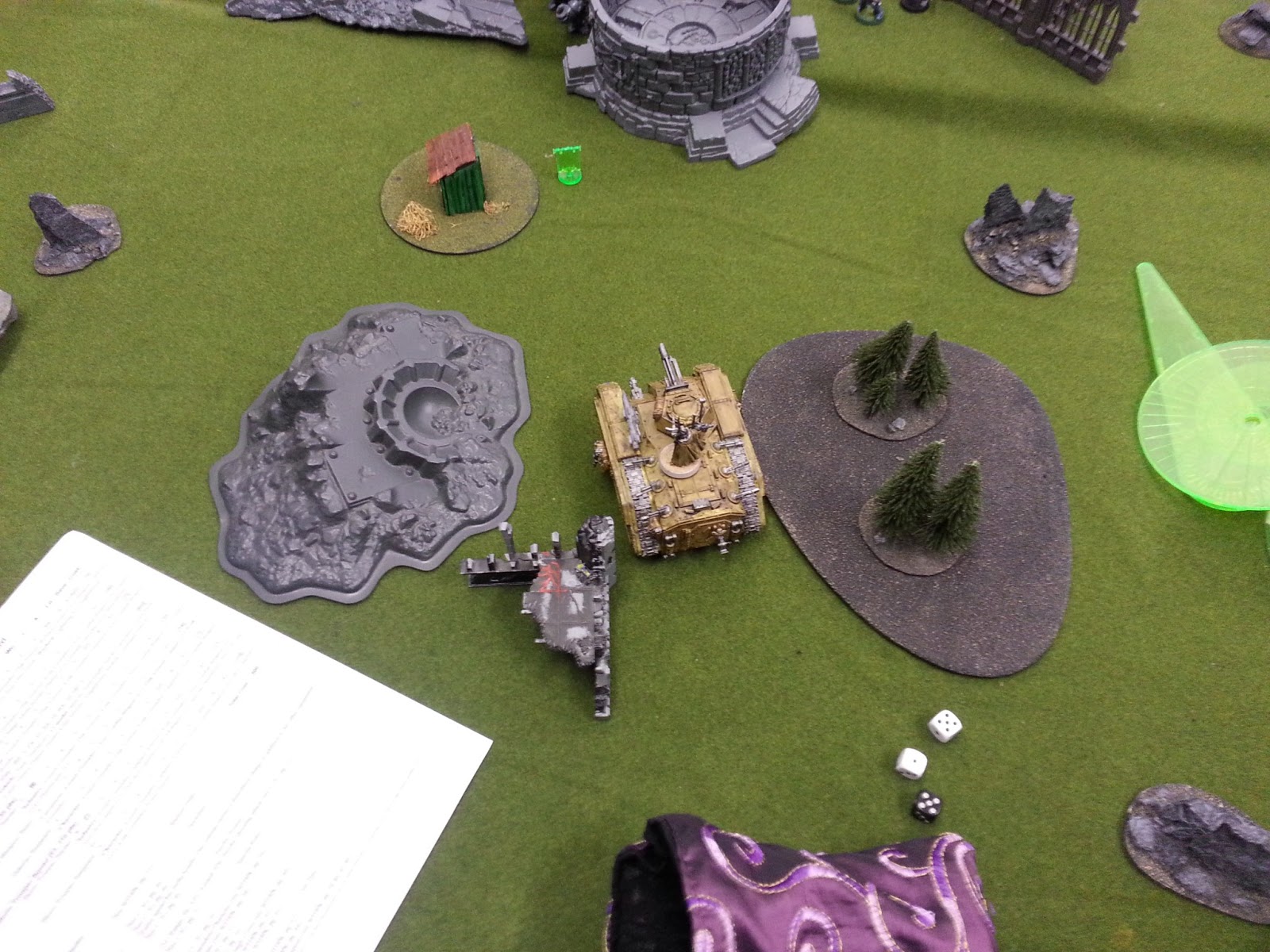 So, I've been playing a little in Dark Sphere's "slow grow" league which has been ambling along happily on Wednesday nights. We're currently at 500 points, and I've been taking the opportunity to use units I might not otherwise use to learn how they work in 6th edition.

In the first week, I painted up three old metal sentinels I'd had kicking about for a while. It was a mental late night painting session as I unexpectedly got home late the night before the slow grow and decided to go for it anyway. 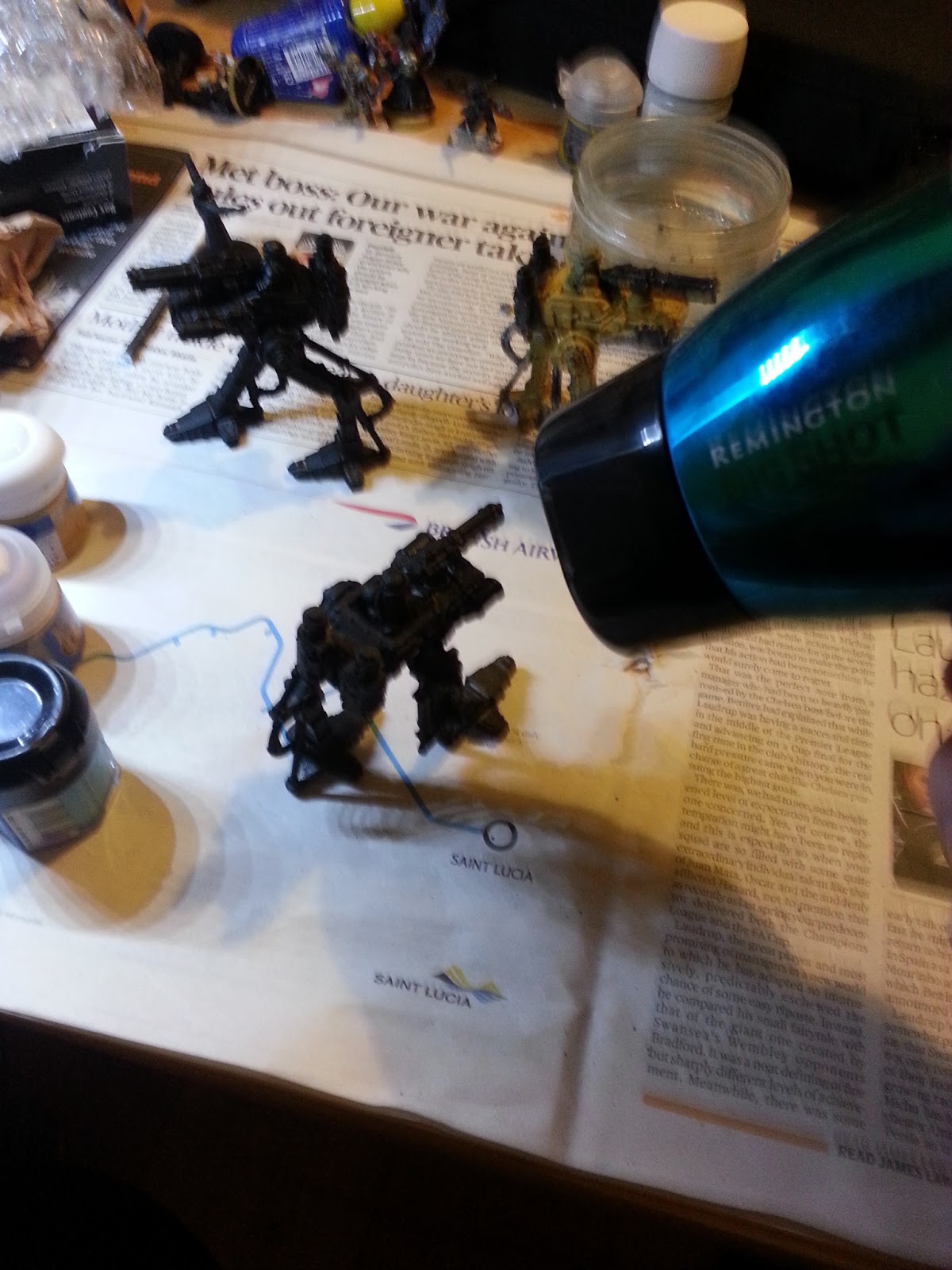 For the record, a hair dryer is possibly the most important tool a speed painter can own! It was so mental I've still not got any "completed" photos, but here they are on the battlefield. 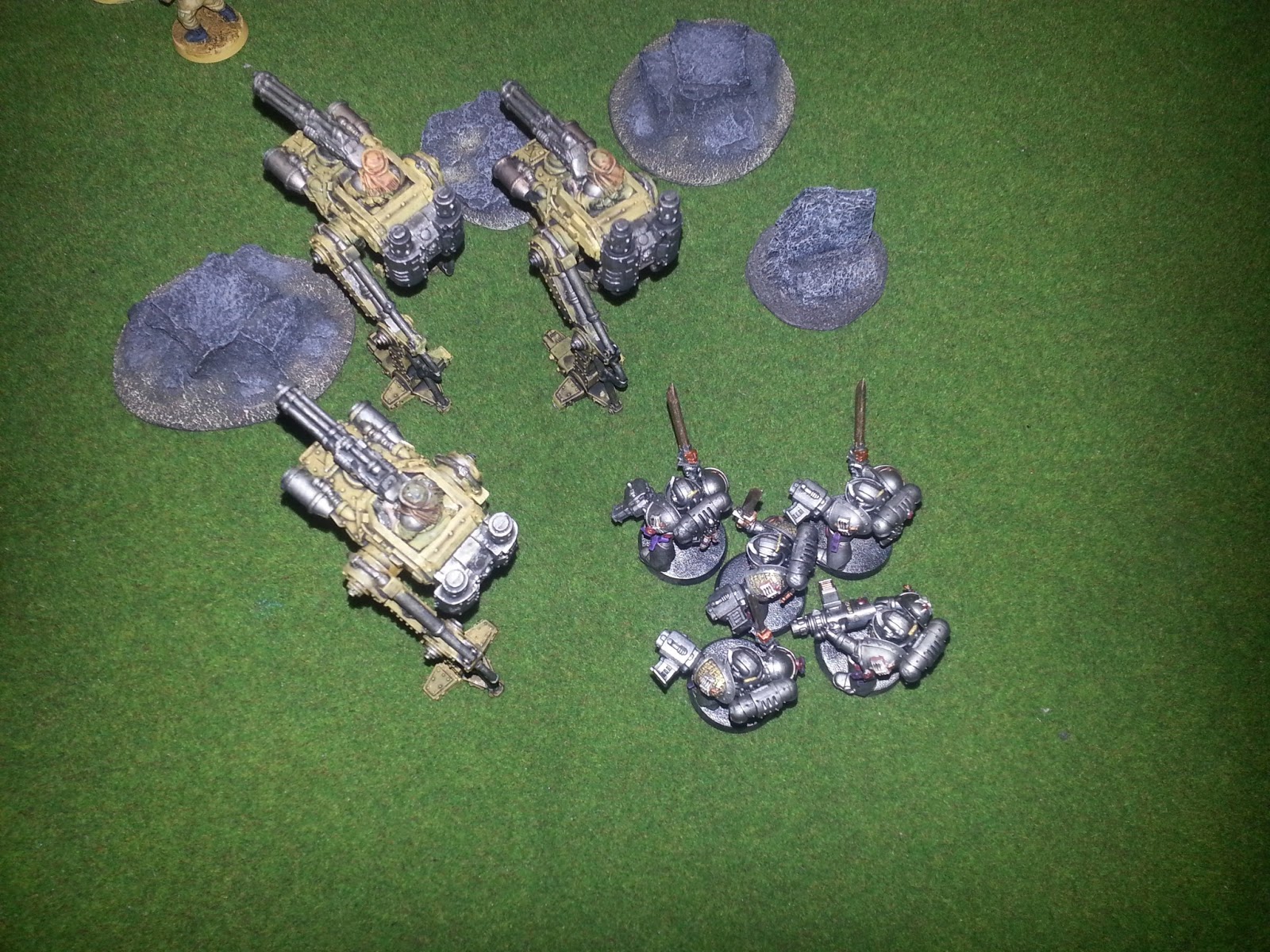 This is, in fact, one of the pivotal moments of the Battleforce Recon mission against the Grey Knights. A strike squad managed to deep strike in directly behind the Sentinels. Which means I should probably move to:

In a fit of lunatic enthusiasm, I suggested to ClauseIV1918 that we use the Battleforce Recon mission from the big 40K rulebook. For those who haven't read it, its a crazy little mission designed for 500 point forces on 4x4 tables. My ever tolerant opponent happily agreed. 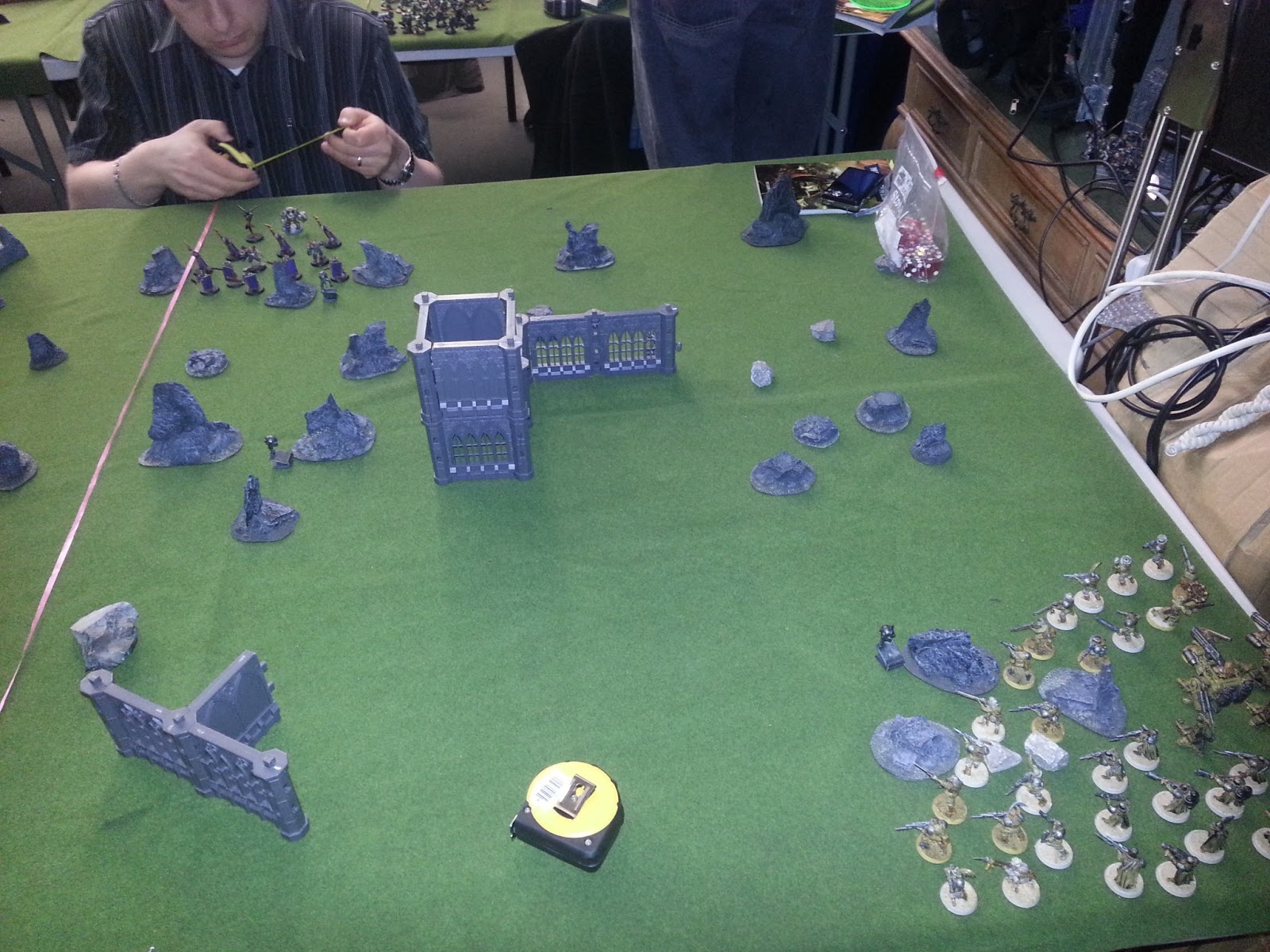 I hate re-using pictures, but this is the best example of the deployment - you have to deploy within 12" of the corner, which left me a little squashed. I was using two penal legion squads, my flamer heavy demolition veterans, a Primaris Psyker, three scout sentinels and some Ratlings (who ended up by the lump of rock in the middle on the right).

The game was a bloody firefight, with the Grey Knight strike squads showing up pretty late to the party, leaving a henchman warband to soak up most of the shooting for a couple of turns. The veterans showed their horrific firepower in turning a full strike squad into mush in a turn of shooting (the demo charge being the game changer on that front), and the Ratlings reliably put a lot of holes in people, although the Inquisitor was very keen to avoid dying... 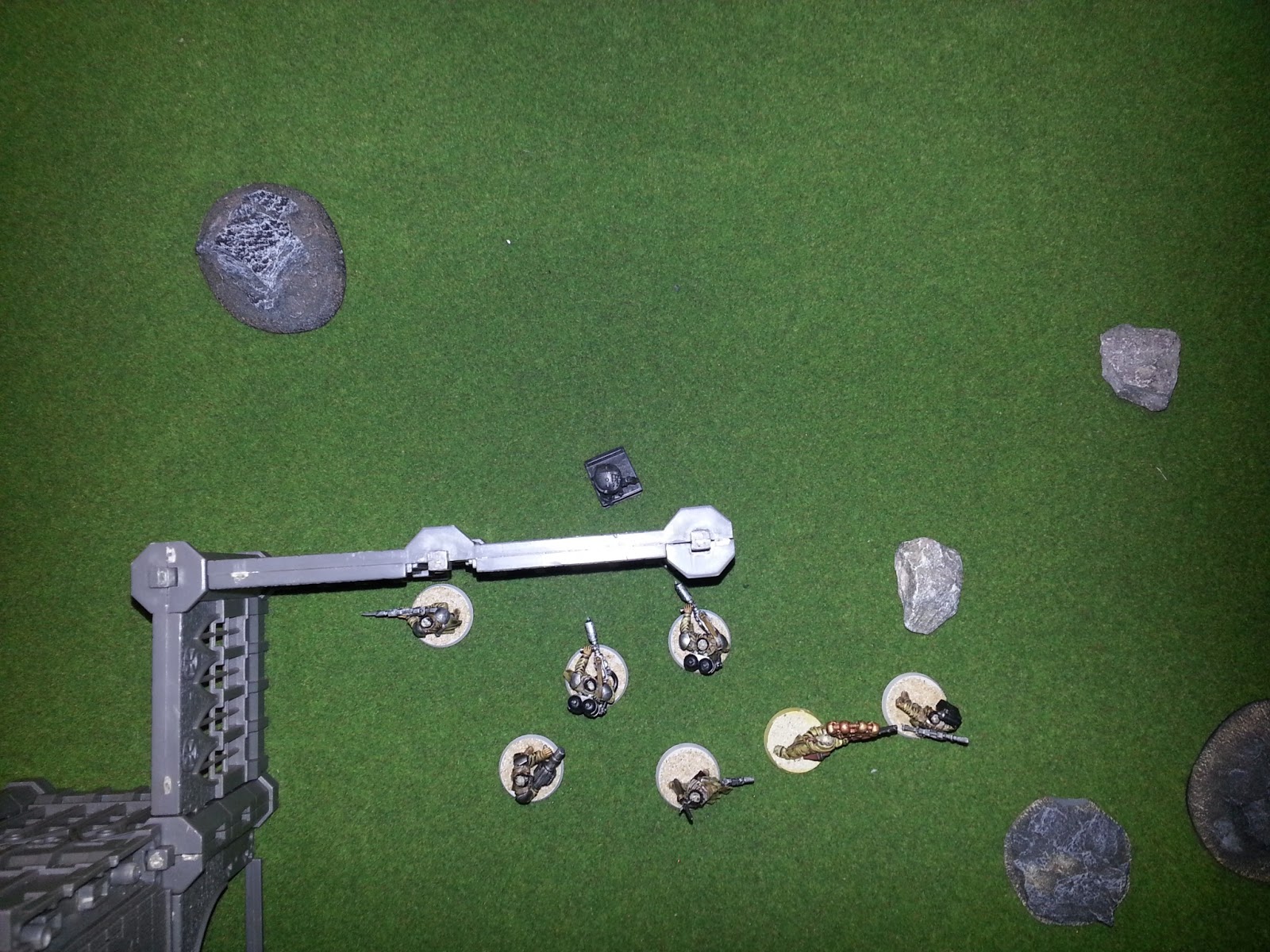 In the end, I managed to hold an objective in the centre, and I think First Blood pushed me to the win, although I don't precisely recall!

One of the newer players had also finished up their game, so, keen to fight something not Imperial, I swiftly challenged their Nurgle Chaos Space Marines to a game. He was trying out missions for the first time, and we also decided to try out Mysterious Terrain as the board had a lot of woods and water. 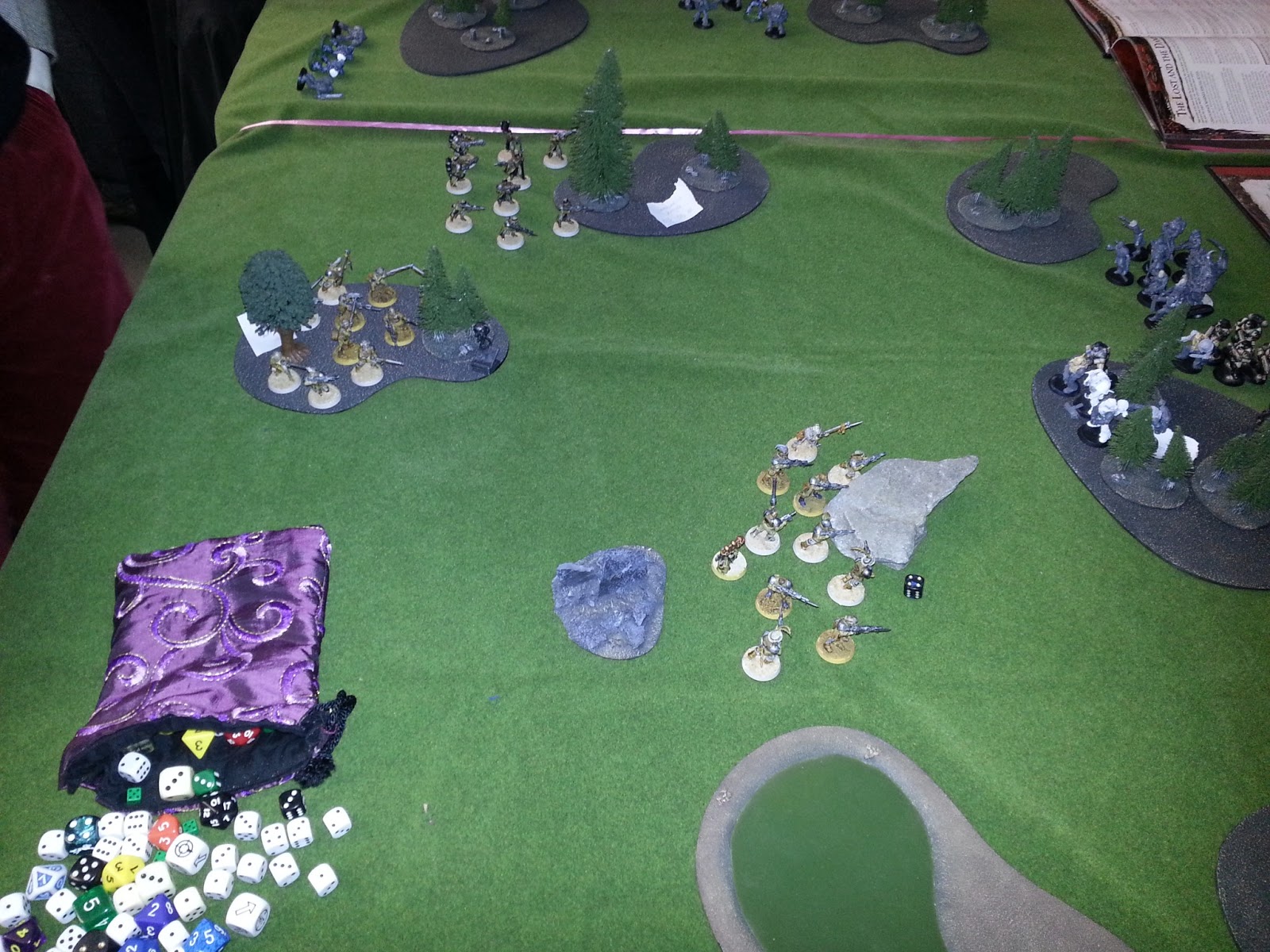 I made a genuine effort to move forward up the board here to take his objective, rather than just sitting on mine and trying to get the secondary mission points. This didn't end well for me - it turns out massed bolter fire will seriously upset the Guard! 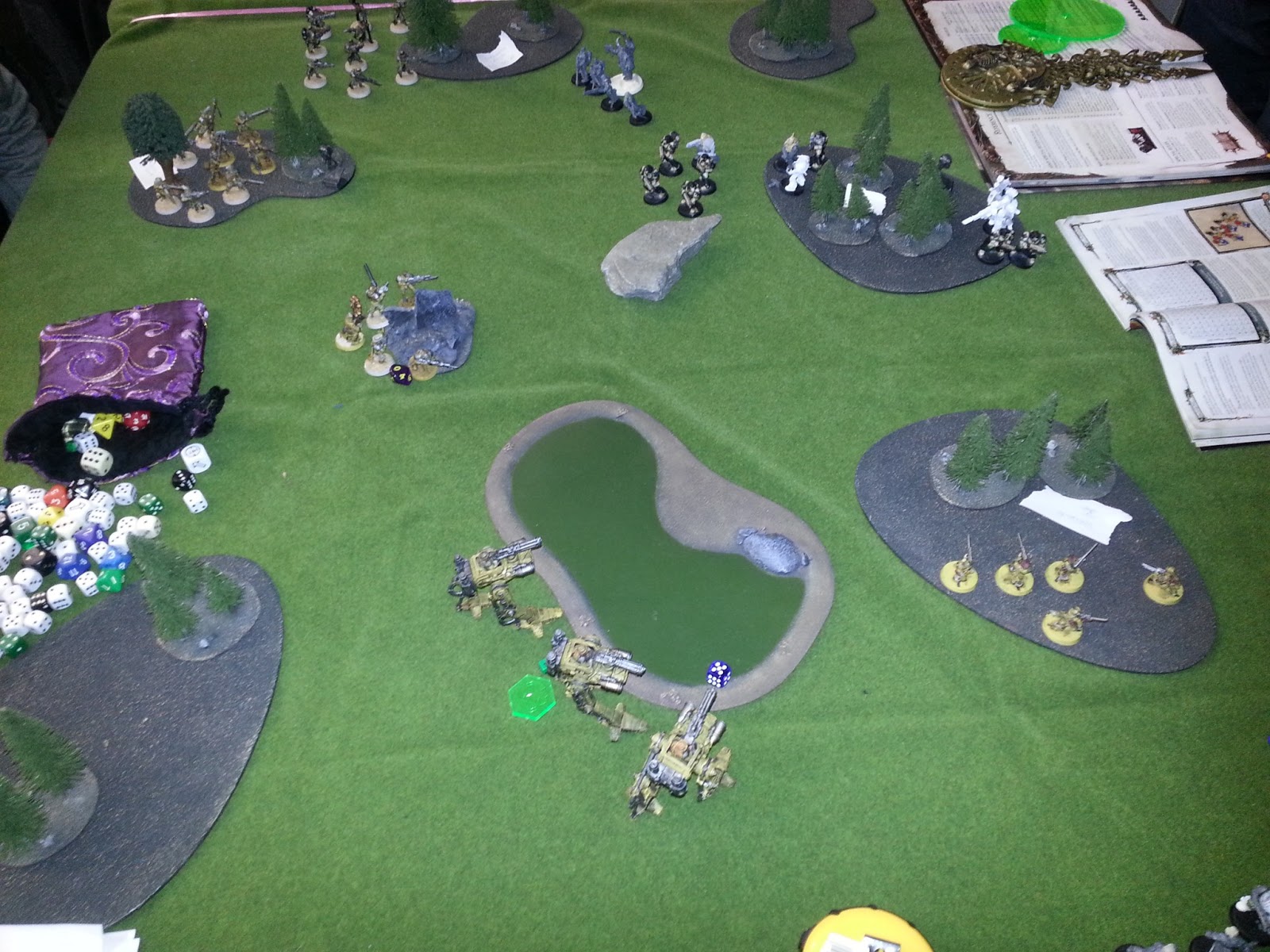 Notice how that squad is a lot further back. And now on fire.

In short, I was brutally wiped out by a mix of highly effective bolter fire and brutal close combat. The Burning Brand also did not help one little bit. The last Guardsman died running and screaming, burning from the inside out as he tried to escape the battlefield.

This will be a little lighter on the pictures as my phone battery was dying - I really must remember to take my charger to work before game night so I can take more photos!

Varying the list this week, I took two veterans squads - one the usual, and one with three plasma guns and a lascannon. In the first battle, I rounded out with a Demolisher Leman Russ. 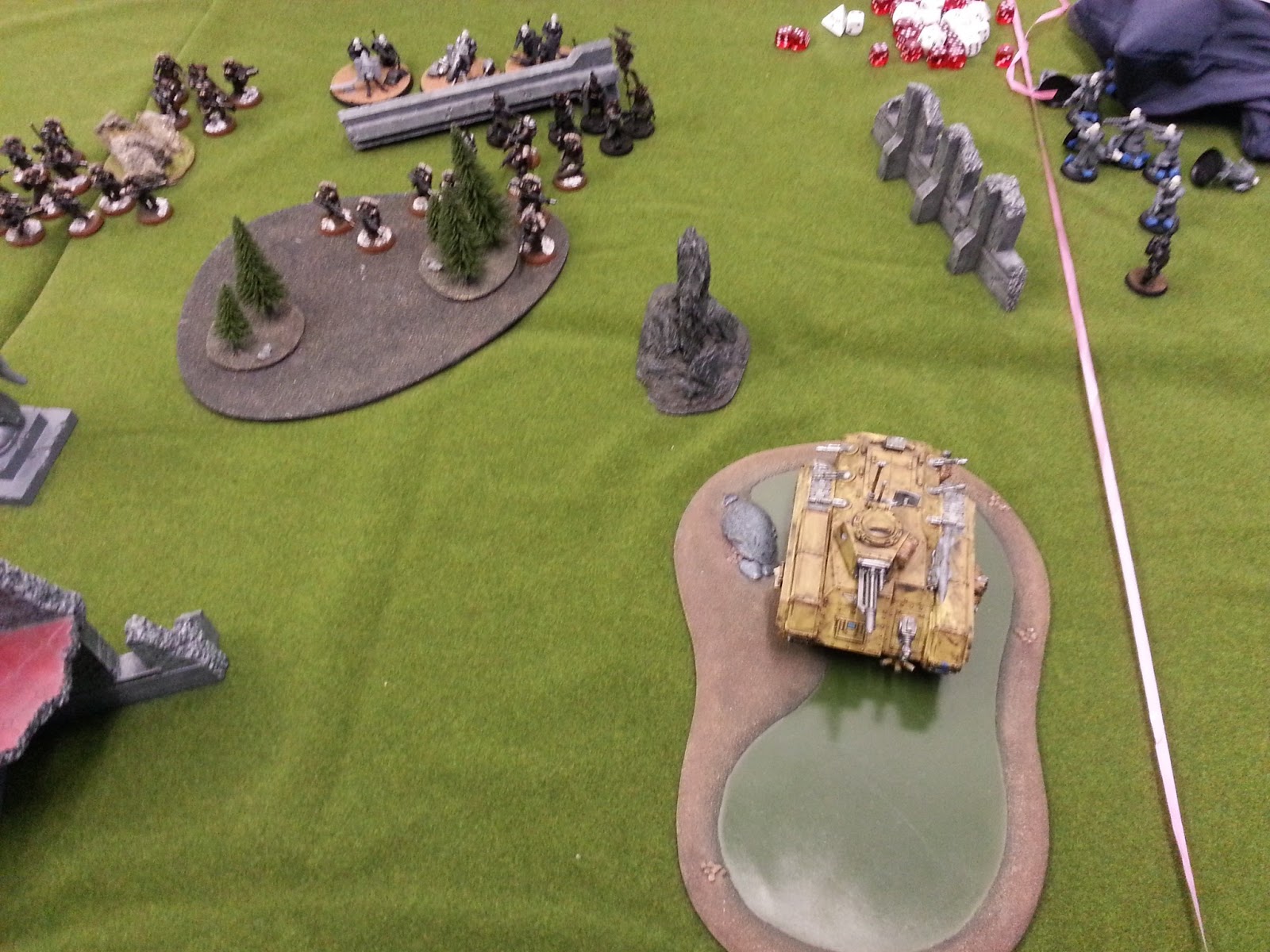 Meanwhile Louis, who normally plays a "Counts as" Space Wolves list, but is trying Guard for the slow grow, had a pretty large infantry platoon, a Command HQ, and a Veteran Squad in a Chimera.

And sadly, no other photos of this battle came out.

Another one of the newer players, this time with a Space Marine list - two tactical squads, commander, small bike squad and a Dreadnought. 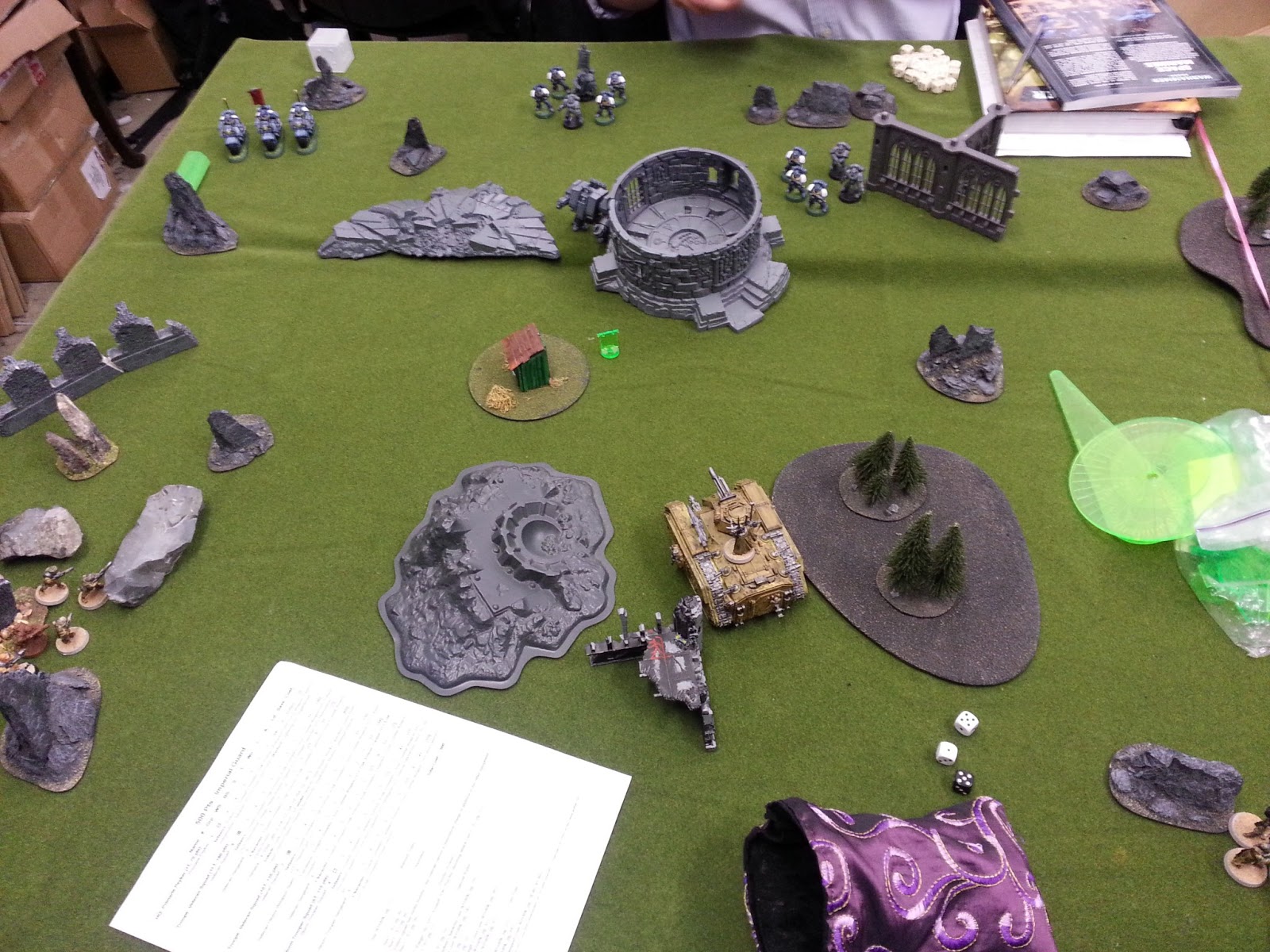 My list still had the core of the Psyker and the Veterans, but swapped out the Demolisher for a Chimera and a small squad of Storm Troopers with two Melta Guns.

I was subject to another tabling here. The Chimera went down to weight of fire from the Dreadnought then krak grenades, the plasma veterans got taken apart by bolter fire and bikers, although they caused some damage and casualties on the way.

The demo-vets did best, as the demo charge deviated onto the Captain and killed him and half his squad dead, leaving the survivors to be gunned down by the Storm Troopers - but the Dreadnought ripped the surviving vets apart in close combat then assault cannoned and flamer throwered the Storm Troopers into mulch in revenge for the loss of the Captain.

I've been having great fun with the slow grow. Building army lists at 500 points is a very different challenge to usual, and I've learnt a lot already. I'll be throwing a few more tactical thoughts I've had as a result of these games up in a separate blog post soon...
Posted by The Responsible One at 23:57 2 comments:

I've been up to quite a lot since last week. I've painted three sentinels, played two games of 40K at Darksphere's slow grow, and picked up a bunch of plastic Guard bits second hand.
What I haven't done is make any more blog posts, including the fiction write up for the Inquisitor game. If I'm going to keep the blog up with my new pace, which I'm very happy with, I should probably doing at least two posts a week - but being so busy with the hobby I don't have time to write about it isn't a terrible place to be, is it? 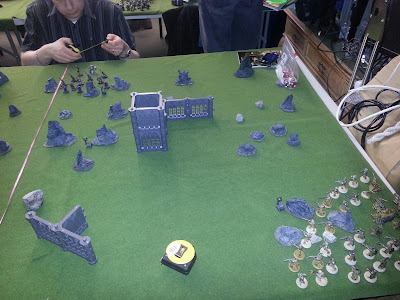 Posted by The Responsible One at 20:10 No comments:

So, last week I didn't manage to get a game of Malifaux in, but I did get my first game of Inquisitor 28 in with a player at Darksphere called Louis, who is a scholar and a gentleman.

What is Inquisitor 28?
Inquisitor is a Games Workshop specialist game which was originally introduced in 54mm. A number of players since have decided it would be much easier and saner to play in 28mm (normal 40k scale). Conveniently, the books refer to IC distances rather than OOC ones, so you can just treat a 'yard' as a centimetre and everything is lovely. There are plenty of people on the internet playing and modelling for it, so there is a lot of inspiration around.

A full "IC" report will follow separately, but I thought I would cover a little bit of how the game played.


A couple of other players were watching, and, well, lets just say it didn't keep their attention as much as it could have!

It took much longer than I expected, even with only three models on one side and four on the other. With four or five different distances you can move, dice rolls to see how many actions you actually get, and a vision / cover mechanic that I still need to sit down and actually work out, it was certainly not quick. Despite that, and a very slow start due to us not realising quite how slow some models would end up moving, things definitely picked up towards the end as we rolled dice and described what was going on pretty smoothly as a story.

I will definitely be playing again, but not every week - this is going to be a "sometimes" game for me.

For anyone looking at starting Inq 28, the biggest thing I would recommend would be to print out reference sheets of the main tables for the rules, and a separate prepared sheet for each of your characters before you start. It will be very helpful and speed things up immensely.

Notably, I didn't. Learn from my mistakes!
Posted by The Responsible One at 20:44 2 comments: