I feel like I've at least achieved something in the past week! 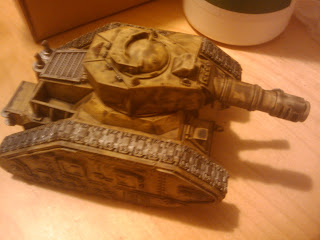 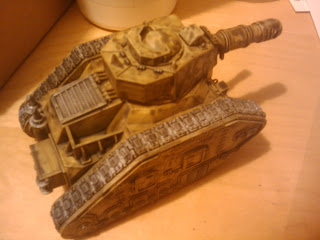 The hull of this tank has already served with distinction at Throne of Skulls, with a Demolisher turret blu-tacced to it. Now it can loyally serve in its proper function!
Posted by The Responsible One at 22:59 No comments:

I have now at least managed to complete my Leman Russ MBT, so I'll be moving on to focus on the conscripts, using the Storm Troopers as a break from them.

I am considering painting up my second Storm Trooper squad using the new paints and methods GW recommend while I do the first using my old painting method, then doing some comparison shots.

I need to look into sculpted / detailed bases for my Malifaux Crew, the first part of which is to go through my wife's existing collection!

I'm not expecting to get a huge amount done this week as work is currently on the wrong side of incredibly busy, with me generally not leaving until after 9pm...
Posted by The Responsible One at 22:52 No comments:

So, AwesomeWife is Awesome, and she bought me a Malifaux crew for our wedding anniversary.

I got a case to put things in, the rulebook, the Zoraida alternate sculpt, the Collodi boxed set and Zoraida, Avatar of Fate.

This is _just_ a spot too much to fit into a 25 soulstone game, so my current plan is to assemble Collodi and Zoraida, leaving the Avatar form until last. I can then drop a Wicked Doll from the starting line up to allow the Avatar form, given Zoraida can make new ones...

I've also been quite surprised that I can't seem to get Army Builder to process Avatar forms. I don't seem to be doing it right. I'm usually a huge fan of theirs, especially for GW lists, but right now, I'm finding Wyrd's own Crew Creator much more reliable and accurate (although given its a tailor made solution by the makers of the game, I'm really not surprised at all!)...
Posted by The Responsible One at 23:34 No comments:

I didn't do much painting at all.

Posted by The Responsible One at 23:23 No comments:

As predicted, my work training course was insane and I got precisely no gaming related things done all week!

I now have a week of holiday where I hope to get some catch up done.

The reason for the holiday is my first wedding anniversary. I got my wife the Incarnate Elemental of Beasts from Forgeworld. She's been talking about doing it up in an awesome winter colour scheme for a while, and I suspect if she gets it done in time it will be a Golden Demon entry.

My wife has, in turn, lovingly added to my painting backlog by getting me a Malifaux crew, the rule book, and a carry case from KR Multicase. I'm going to be going to pick them up tomorrow...

I'm going to try and set myself some goals for the coming week, and see how well I manage in getting close to them.

I think that's pretty achievable, all told. Lets see how well I do!
Posted by The Responsible One at 13:40 No comments:

Email ThisBlogThis!Share to TwitterShare to FacebookShare to Pinterest
Labels: Malifaux, Painting, to do, Wife

So, how has my painting & modelling been coming along in the past week?

Well, after trying to trim the flash from one of the tiny pipes on the Forge World Titan Tech Priest's axe resulted in damaging the model, and I'd had a little cry, I decided to put him on hold for now. There was no way I was going to get him done in time for the painting competition last Saturday, so I decided to chalk that up to experience and leave it be for now.

So, I did a bit of pleading to the wife, and she fixed my mess up, and I put him back into his bag to finish the prep work later once I'm a lot more confident on such things. Instead, I decided to learn how to use a Dremel.

In short, they're awesome, and cut model prep time down extensively.

As a result of a productive weekend, I have now;

Cleaned up the second half of my conscript squad
Undercoated five of the conscripts, with the rest still to do (stupid rain)
Undercoated my stray Leman Russ turret

I also managed to get some of the base coating started on my first Storm Trooper squad while I was painting in Darksphere on Tuesday painting night...

Because we're so busy (only just back from a monthly pub social!), and I'm on a work training course this week, I'm going to be giving Darksphere painting night a miss tomorrow. Despite that, I'm pretty hopeful of getting some stuff done over the week on some of the quick wins.

I've also joined the blog up to the UK Bloggers Group for 40K, so may see a very slight increase in traffic when I get as far as doing such things as regular pictures and more thoughts on tactics and stuff.
Posted by The Responsible One at 00:00 No comments: