Fomorian Witch and an old favourite 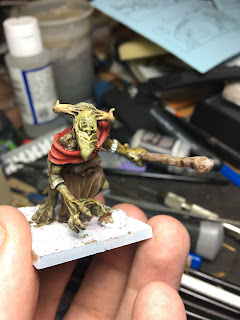 So, I decided to throw down some paint on this Fomorian Witch. She's called Nemain, and is produced by Krakon Games. The skin tone is mostly Foundry Moss Triad, but also using Athonian Camoshade for extra depth and with light touches of Vallejo Duck Egg Green as an even lighter highlight.

I was a little sloppy with initial colours, so I need to go in and neaten up a whole bunch, dropping some of the darker colours back in to areas of shade. The brown robe doesn't have enough contrast with the skin if it's not under bright light, so I need to think about how to give that some definition. I'm pleased with the red, though. I've been being told off about going too dark by Sim, and this effort with Mephiston Red, Wild Rider Red and Carroburg Crimson is much better than my usual murky stuff. 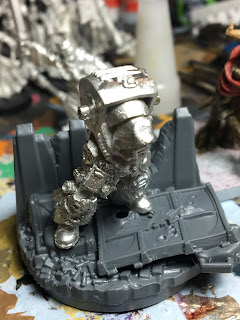 Meanwhile, this classic "Made to Order" Daemonhunter has been given an appropriate Hero Base. I wanted to make sure this old classic figure was on a 40mm base for the modern terminator base size, but was having trouble working out how to not make it look swamped. By making, effectively, a little mini diorama, I think I've solved the problem well. (I've left the arms off for painting.)

I'm pretty happy with the amount I've got done this weekend. Various figures also got undercoated in the first good weather we've had in ages, but you've already seen them assembled, so I won't repeat that here.

Finally, I'm having a little bit of a clear out of some bits and bobs I'm just not going to get around to painting or using. Feel free to have a look at my stuff on eBay - there's definitely still some bargains there at the moment!
Posted by The Responsible One at 21:32 6 comments: 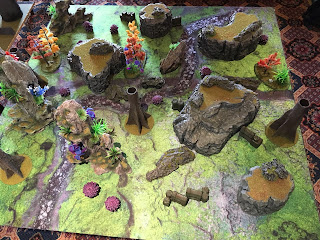 So, back at the end of January, I went down to High Brooms to play three games of Infinity at the Totally Crit Open 9. Get used to looking at this jungle board, as random selection ended up with me getting to play all three of my games on it! 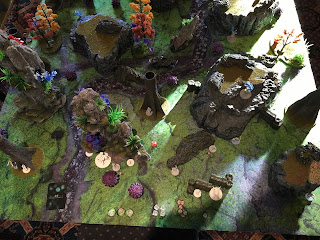 The first mission was "Safe Area", and I was up against aphexblue, who was playing the Shock Army of Acontecimento. He kind of apologetically confessed he'd kind of won the UK Infinity Masters this year.

Well, I thought, at least you'll end up on a bottom table next game and have an easier time of it. As it was, I was facing a sniper link with a good field of fire in the centre of the table, and a light tag - Tikbalang, maybe? 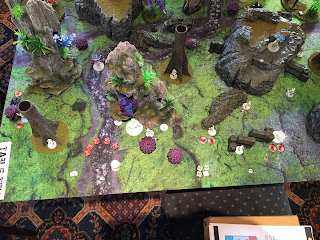 With a tournament, there's not really much of an opportunity to take lots of close up shots. So, the game summary - he runs a repeater remote up the flank and nearly brain melts my Interventor Lieutenant with a Killer Hacker. Passing three BTS rolls is all that saves me.

I manage to get rid of the repeater bot and have a TAG in a commanding position and the sniper link to deal with - but positioning means I simply can't slice the pie to get one and not the other - so my Intruder HMG goes down without having taken out either, although he managed to scare the TAG and make it duck back into cover.

Then I get absolutely mauled. The TAG rampages across the field taking out almost everything I have and putting me into retreat. I make a noble effort to take out the TAG with my three surviving figures, but in the end, a lone Alguacile Forward Observer flees the board as the sole survivor. I lose 6-0, avoiding a bigger loss as the total collapse of my army ends the game before aphexblue can get his models into good scoring positions. 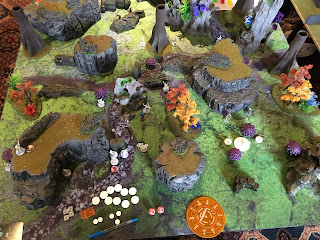 After a pie and chips, game 2 comes around with the much dreaded Rescue. I'm up against Riker, who is running a Haqqislam force. This time, I'm paralysed trying to take out a Djanbazan with HMG, and despite judicious use of White Noise, never quite manage to dislodge it.

My spending time on that problem means that a Haqq Total Reaction remote can move up into a good position in the centre, and I can't get any figures into a good spot to discourage Haqq from grabbing a civilian and running off with them. 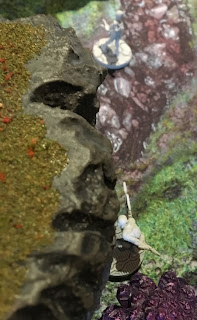 This is how close my Zero got to one of my civilians, but I ran out of orders!

I'm kicking myself for not getting a picture of the Haqqislam, because they were absolutely gorgeous. 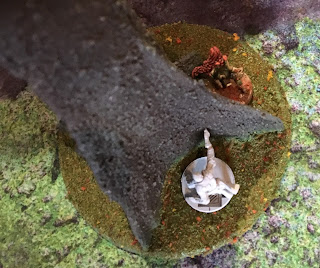 Still, the new hacker "Switch" scored me my only points of the tournament, ambling up the field pretending to be a WarCor, then hacking the enemy HVT for a mighty 2 points. Couldn't protect me from a 7-2 loss, though. 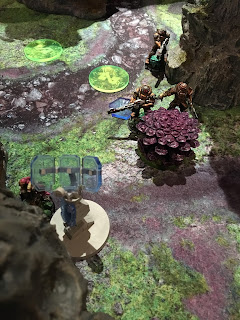 And finally, its Antenna Field, and I'm facing off against some beautifully painted Morat Aggression Force, run by JoeyDoubleDee. Here, a Vanguard link holds down an Antenna until the Lunokhod ambled up and showed them that the Heavy Flamethrower has a bit more reach than you remember... 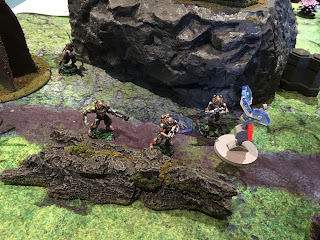 Once again, I got ruined by MSV2 - this time a link team of Yaogat who walked up the board as a Haris link them dropped the link to go into suppressive fire and stayed there most of the game. I simply couldn't dislodge them and got pretty much murdered in my turn 3 trying to get them off the objectives.

It then became a simple exercise for them to do a couple of clever runs to the right antenna to claim a full 10-0 victory over me. 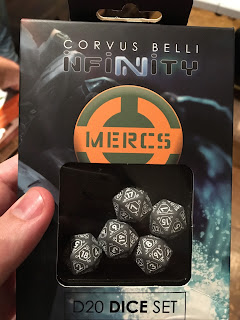 With such a stellar performance, I was pleased to pick up the Wooden Spoon award, and am now officially one of the worst performing ITS players in the country...

If anyone plays Infinity, I would strongly recommend playing in a Totally Crit Open. They're welcoming, friendly, and well run. They also have a podcast, which is rather good.

Learning points: work out how to deal with MSV2. Get better at working out the odds of doing something before you do it. Get better at taking out models in suppressive fire.
Posted by The Responsible One at 22:11 4 comments: