But what about your painting, TRO?

A few of my regular readers may recall that in the dim and distant past, I used to post painted models to this blog, rather than just lots of battle reports (mostly Infinity, all unpainted).

Well, there's a reason for that, best illustrated by a picture: 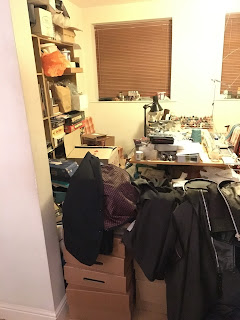 The Mess has gotten worse. My wife can no longer get to the cupboard we keep the coats in because there's too much junk in the way.

Well, I decided to sell some stuff to declutter, but didn't get it out first - which meant in turn that when I went to search for it, I made a mess. Worse, I still haven't found half the things I sold, so they're sitting somewhere in that pile with someone willing to use them!

So, rather than painting pictures, for a while you're going to get a few pictures of my quest to downsize the miniatures collection, stop hoarding, and get back to a manageable backlog.

Don't sell things until you've found them. Get stuff out, sort it. Box up the stuff you're going to sell, then sell it.

Start on the quick wins - in this case Betrayal at Calth and the Chaos half of Dark Vengeance were big, bulky, and easy to find.

I still have some battle reports to post, but expect to see them interspersed with articles about the Purge Of Stuff.
Posted by The Responsible One at 20:31 6 comments:

Email ThisBlogThis!Share to TwitterShare to FacebookShare to Pinterest
Labels: This week, to do
Newer Posts Older Posts Home
Subscribe to: Posts (Atom)