All sorts of busy

Well, it's been a busy week here. I've been desperately procrastinating assembling the figures I need for Winter Challenge 2015. So far, of the 9 models I actually need for my list, I've assembled 2 - and it's not easy assembly. I've twice now had to go back and pin things that I thought would be fine with just glue. They're beautiful models, but quite delicate! 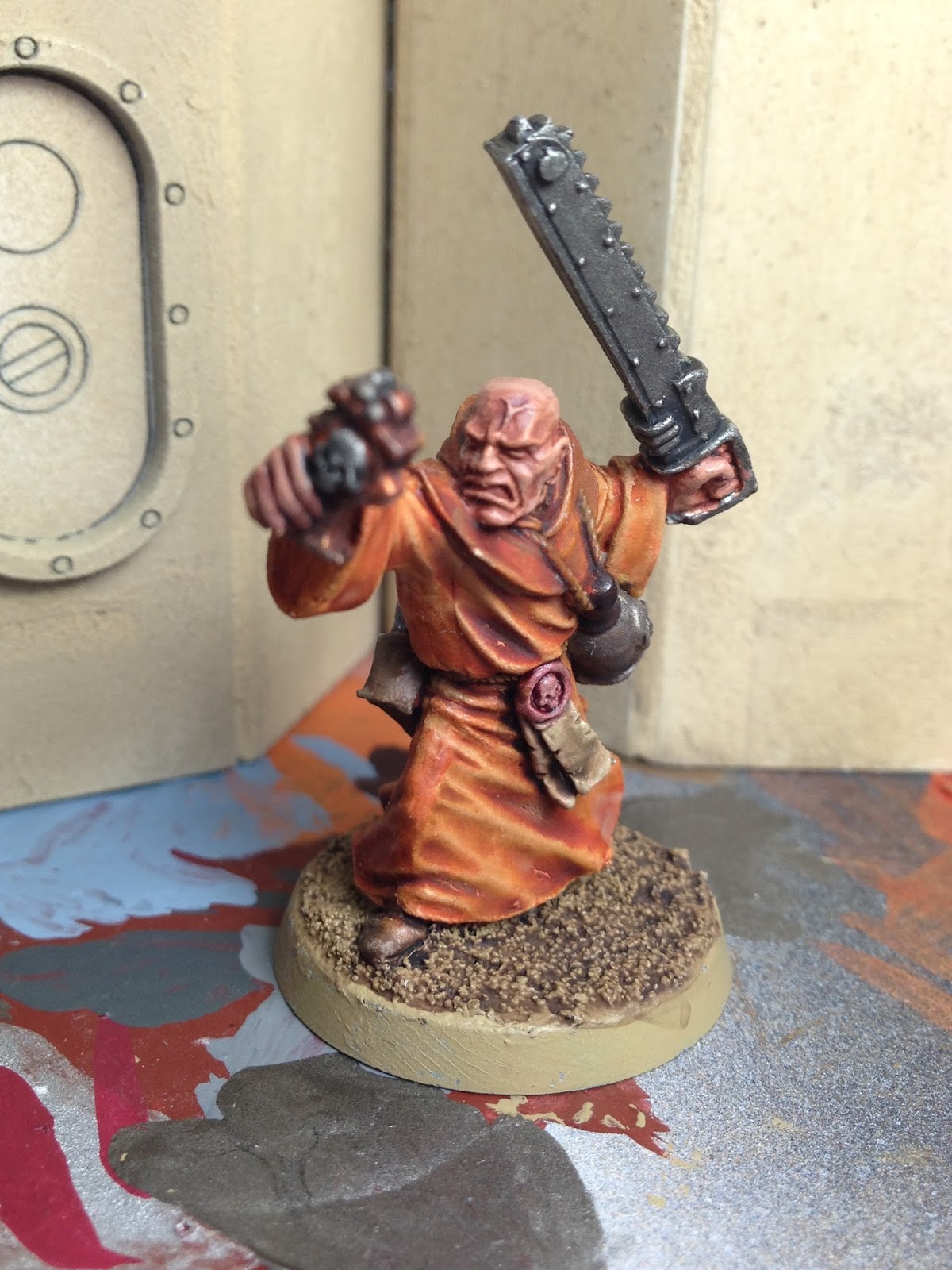 I'm sure some of you will be saying you've seen this chap before. Which is right - but he took quite a few chips when I was gaming with him last year, so he ended up back in the painting queue for a bit of medic work and touch up. I actually think he looks better now than when I finished him the first time around. 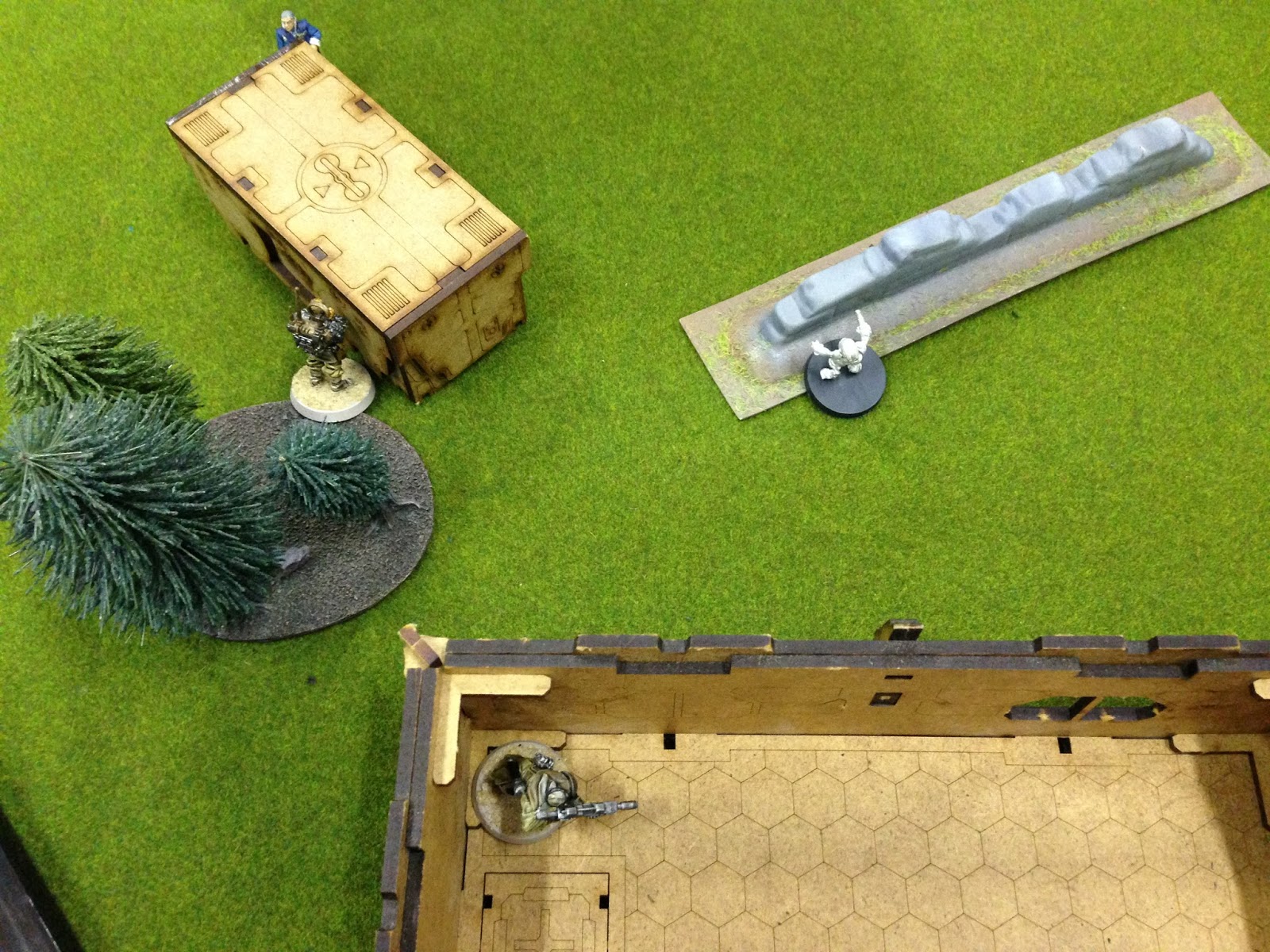 I got to play Infinity again on Tuesday, with the first Actual Infinity Models. Zoe and Pi-Well took the field. It was my Ariadna opponent's professional opinion that Pi-Well was really, really annoying... 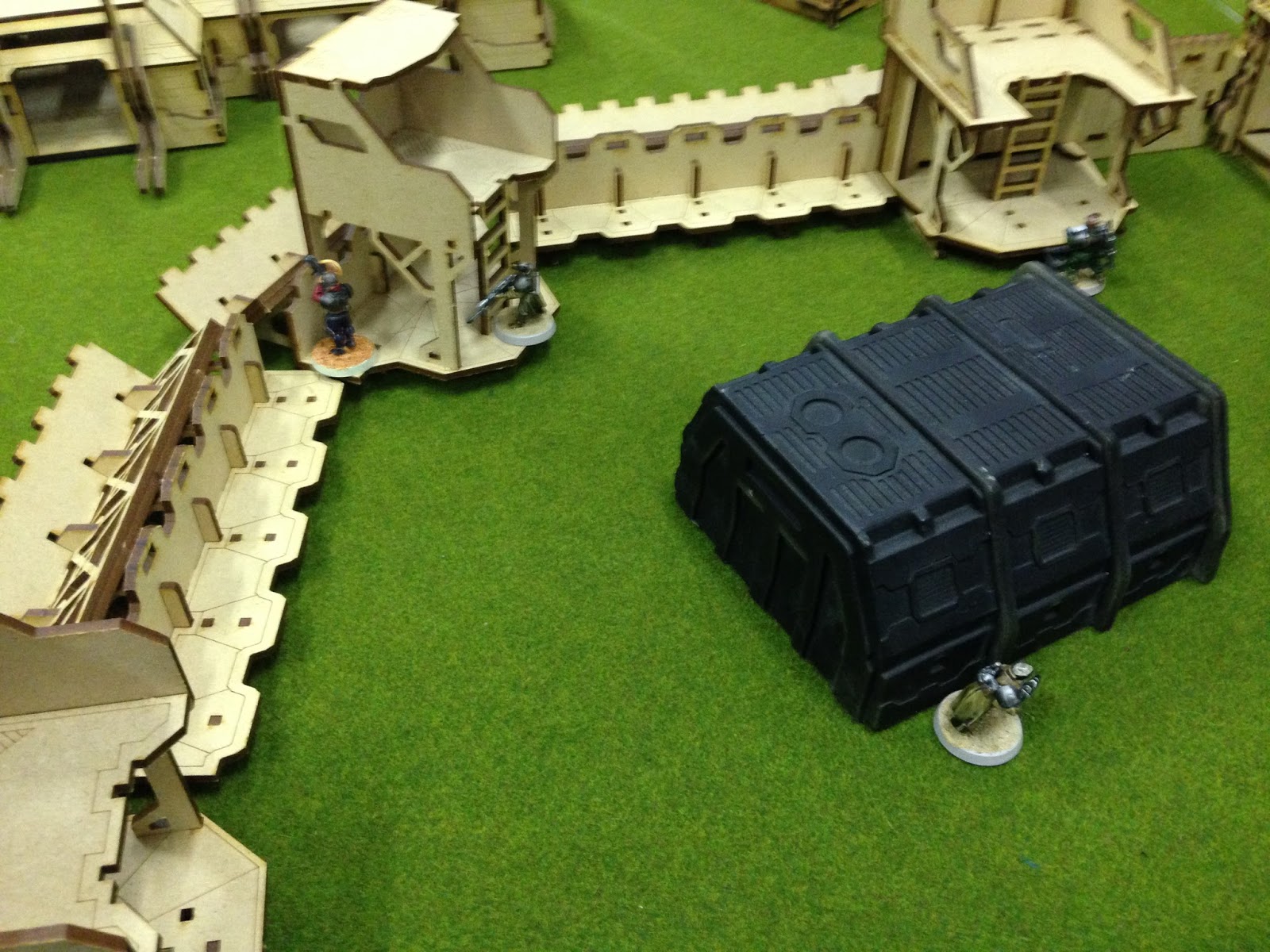 We were playing the armoury mission from the book, and I learned a few things. Veteran Kazakhs are really really tough, but have no BTS, so do not like a swarm of nanobots to the face. They like explosive close combat weapons even less!

I managed to pull a win out of the game, almost entirely due to the Reverend Healer marching across the field, punching a Veteran Kazakh to death and clearing the rest of the room single handed. She currently remains my stand out "woman of the match". 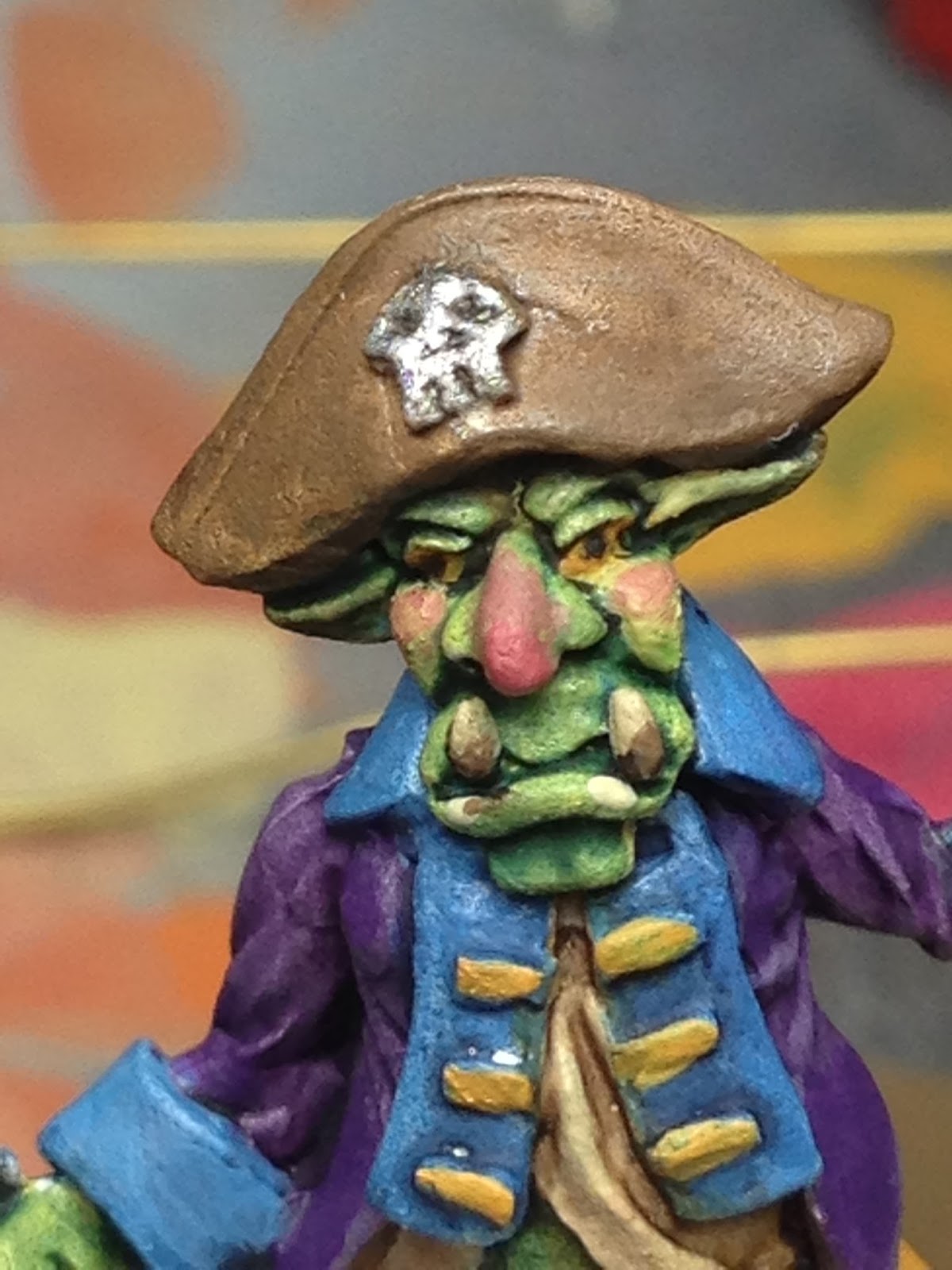 This was a work in progress shot I took of the pirate goblin from Goblin Aid I've been working on here and there. I'd originally planned to do a simple tabletop quality paint job but I've somehow ended up trying to give him a red drunk nose and stripy trousers. On top of that, my wife pushed me to also give him rosy cheeks!

I'm starting to take these high definition close ups as a way of reviewing how well my painting has done so far, and what needs touching up. This identified for me that the front of his coat, his tooth, his lower lip and just under his left eye all needed work. 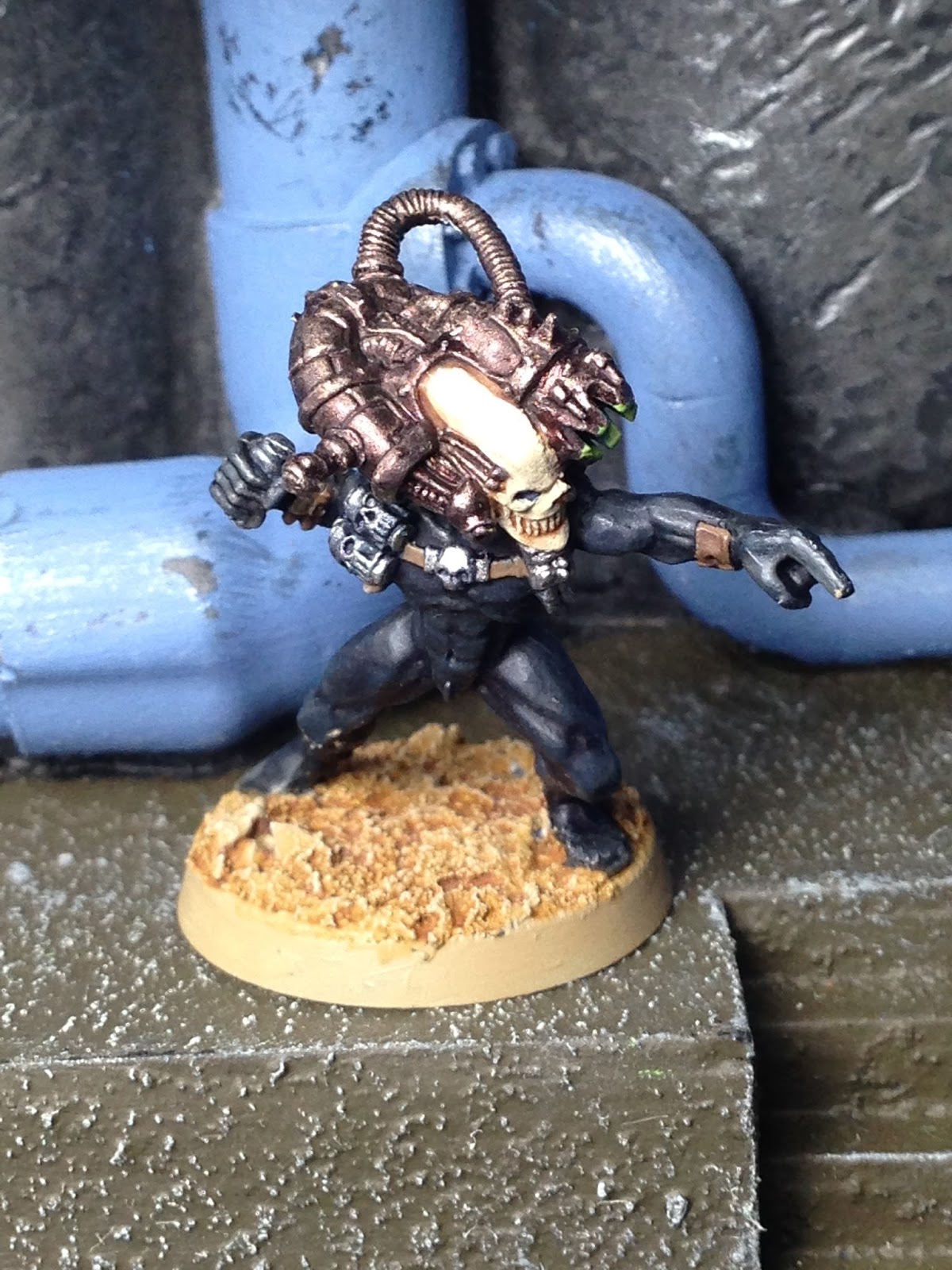 I've also finished the last of my assassins. The Culexus is just done to a simple tabletop quality, but I'm happy enough with it for gaming purposes. 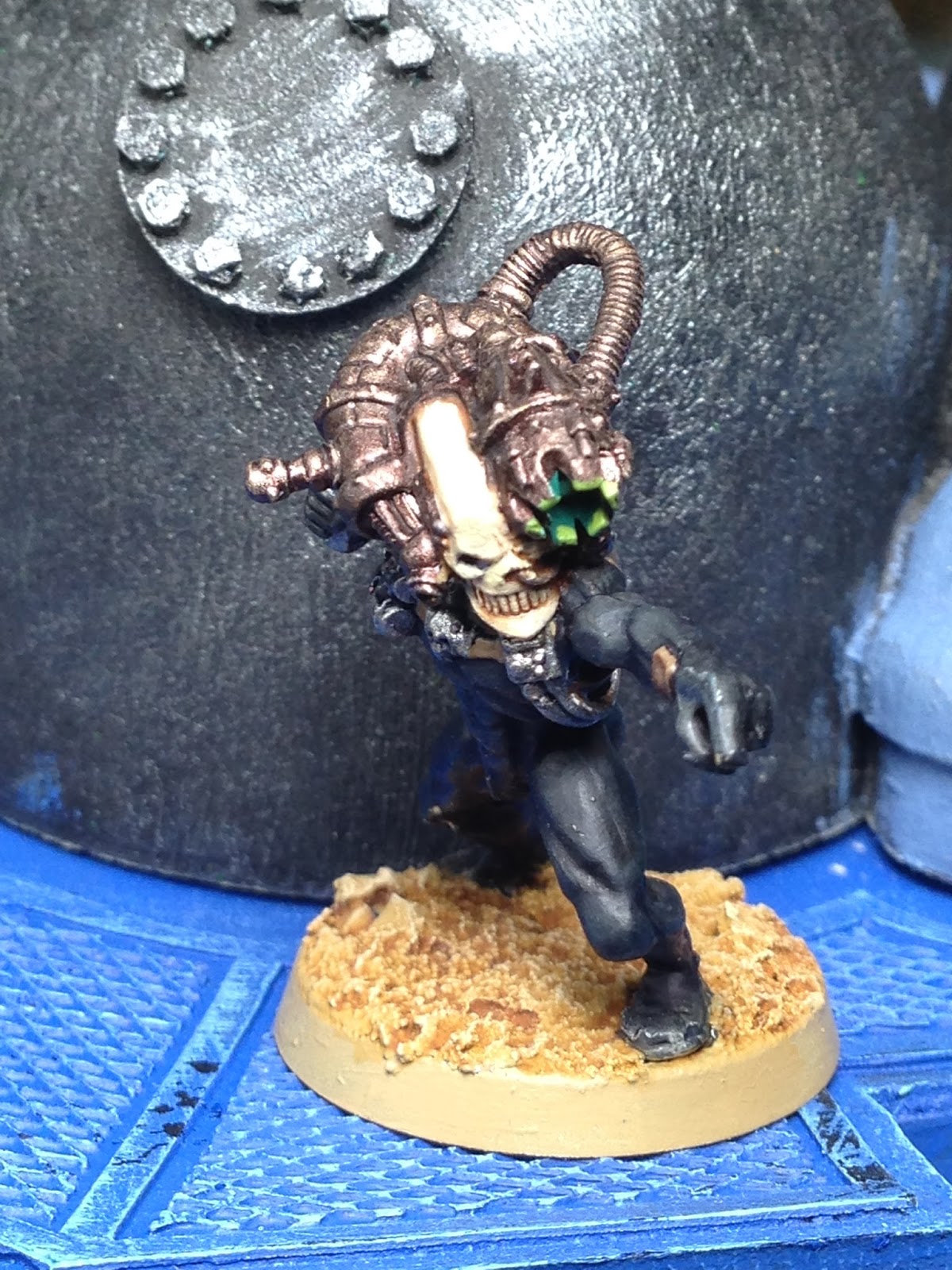 I now have all four of the assassins painted, which means that I should really try fielding the formation at some point in the near future. How could that possibly go wrong?
Posted by The Responsible One at 18:22 1 comment: 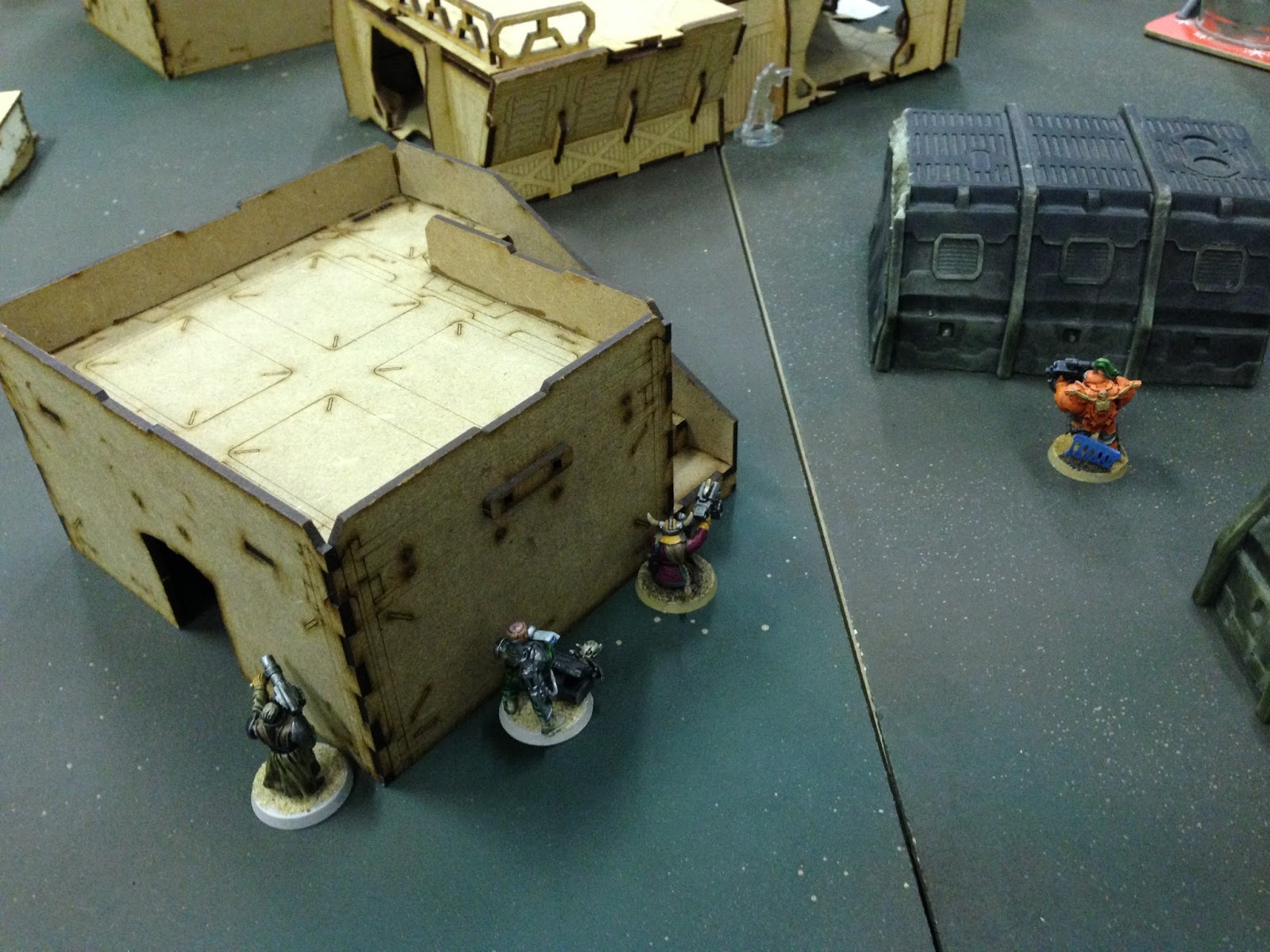 So, a few of us brought 150 point Infinity lists to Dark Sphere to start learning N3. We had a simple mini mission of "claim the centre building". With my models not yet assembled, I used some proxies, but generally using models I have so when they're assembled I'll have a head start. Here's the list I went with: 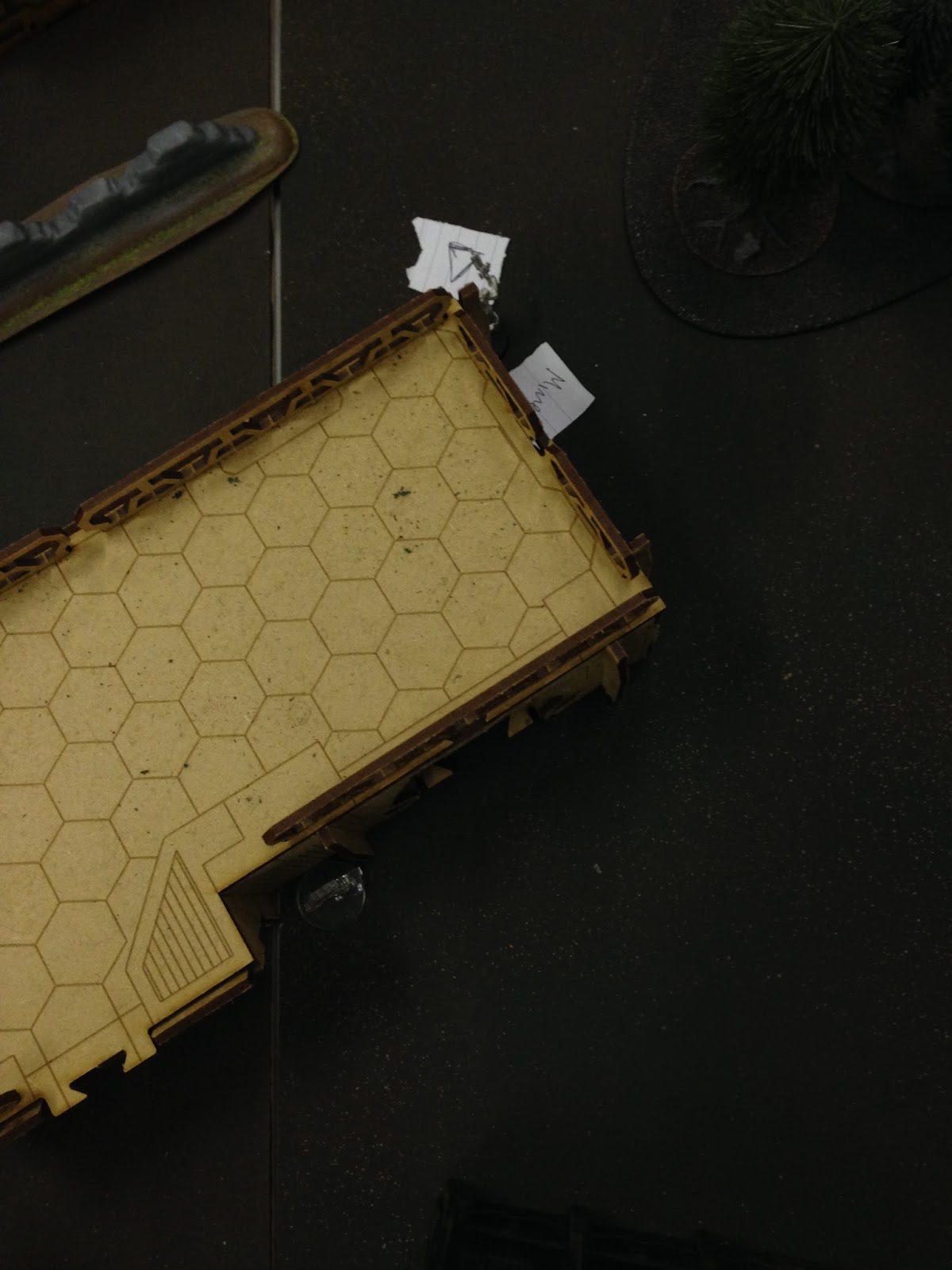 I'd originally planned to have my Zero mine up the central building, but my opponent got first turn and mined it up first. 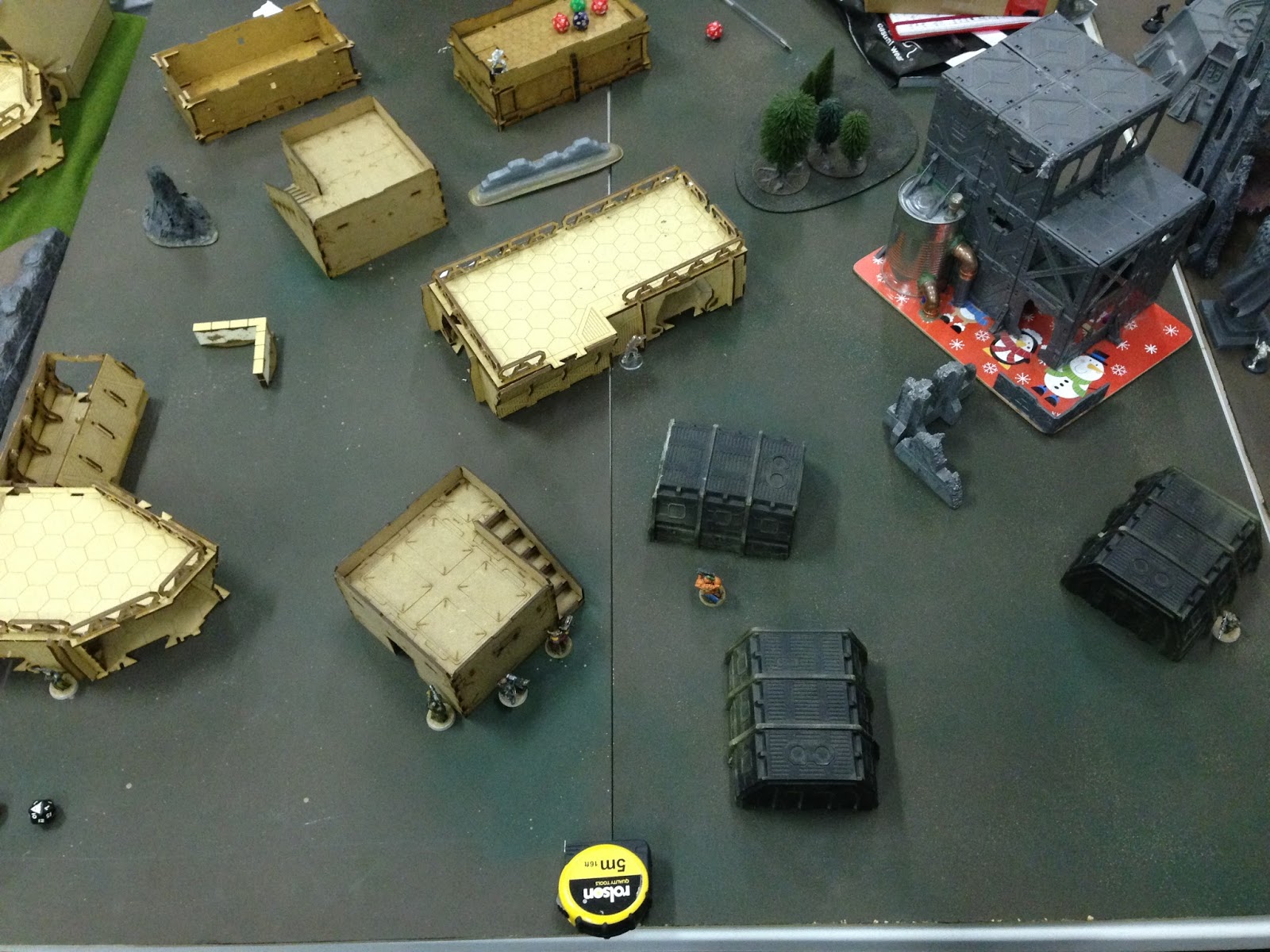 This is around the point I realised that Infinity is going to be a lot harder to do battle reports for. As your turn can have models activate multiple times, shoot and be shot, it's not just a case of taking a quick couple of photos after the end of a Movement Phase and a Shooting Phase. 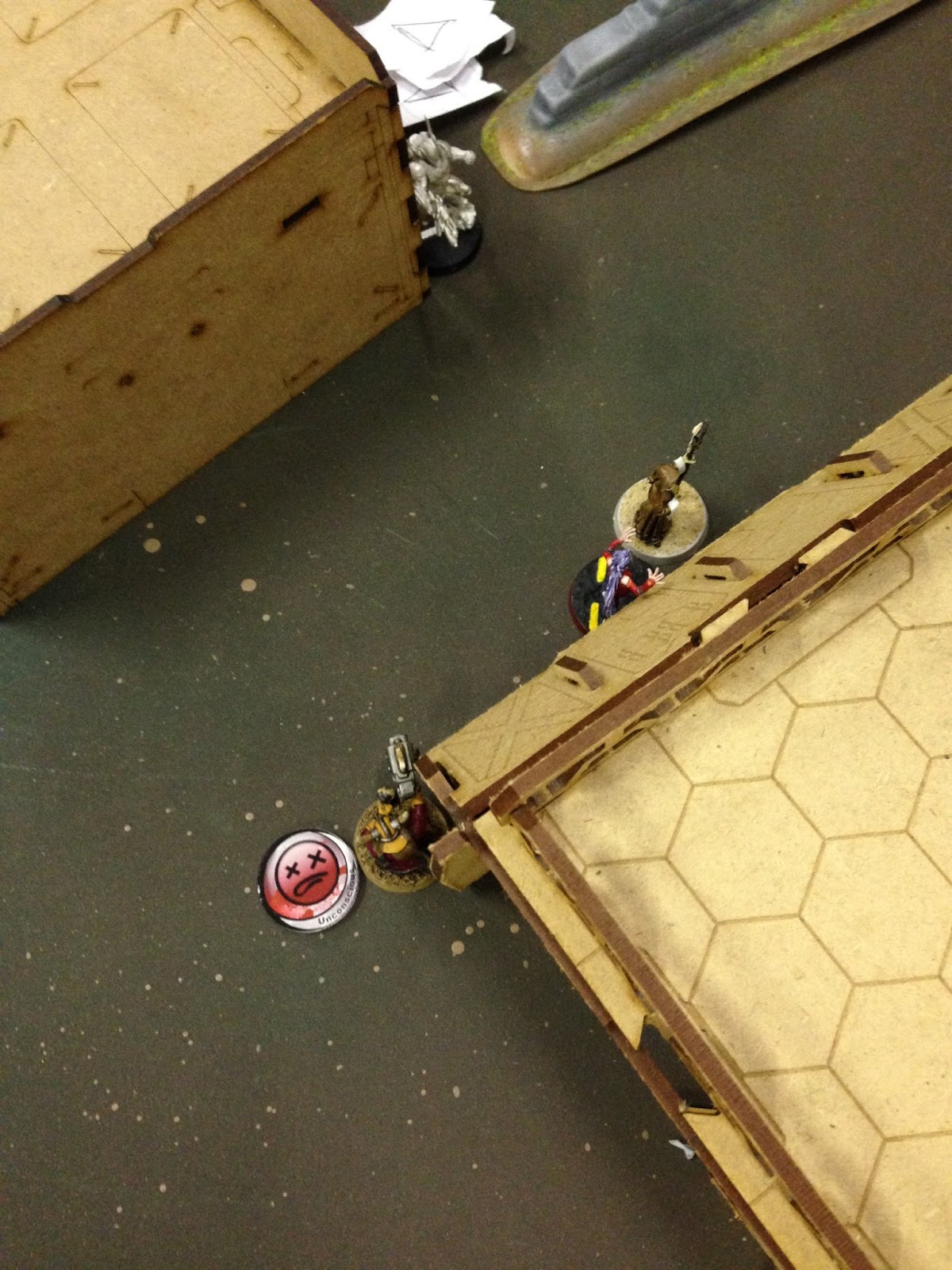 As such, I abandoned taking photos pretty quickly, and instead, I'll sum up what I learned. Hackers are really good against models who are vulnerable to them - possibly because at the moment they are feared and people will move to avoid encountering them. It may be that it turns out that bullets are perfectly acceptable anti-hacking protocol.

Learning range bands is going to be important. There was a point where I realised a grenade launcher would need a 1 to hit, and another point where the Spitfire did horrible things to a sniper because he got close. The Reverend Healer was also completely bad-ass, making me realise that the higher point medium infantry can be really tough when used right.

In short, Infinity is really about having a tool box, with each unit having things that it is good and bad at, and no unit being all round amazing at everything. I'm liking it more and more already.
Posted by The Responsible One at 19:00 2 comments:

So, following my review of last year and many ambitious commitments, I decided to start as I meant to go on, and be pretty productive.

I've been meaning to try out the Pomodoro Technique for a while now. For those of you not into clicking links, the short version is that you spend 25 minutes doing a thing, then take a five minute break. Then you do another 25 minutes, and 5 minute break, and so on, taking a longer (half hour to an hour) break every 4 Pomodori. They're named after the tomato shaped kitchen timer the chap who came up with the idea first used (Pomodoro being Italian for tomato). 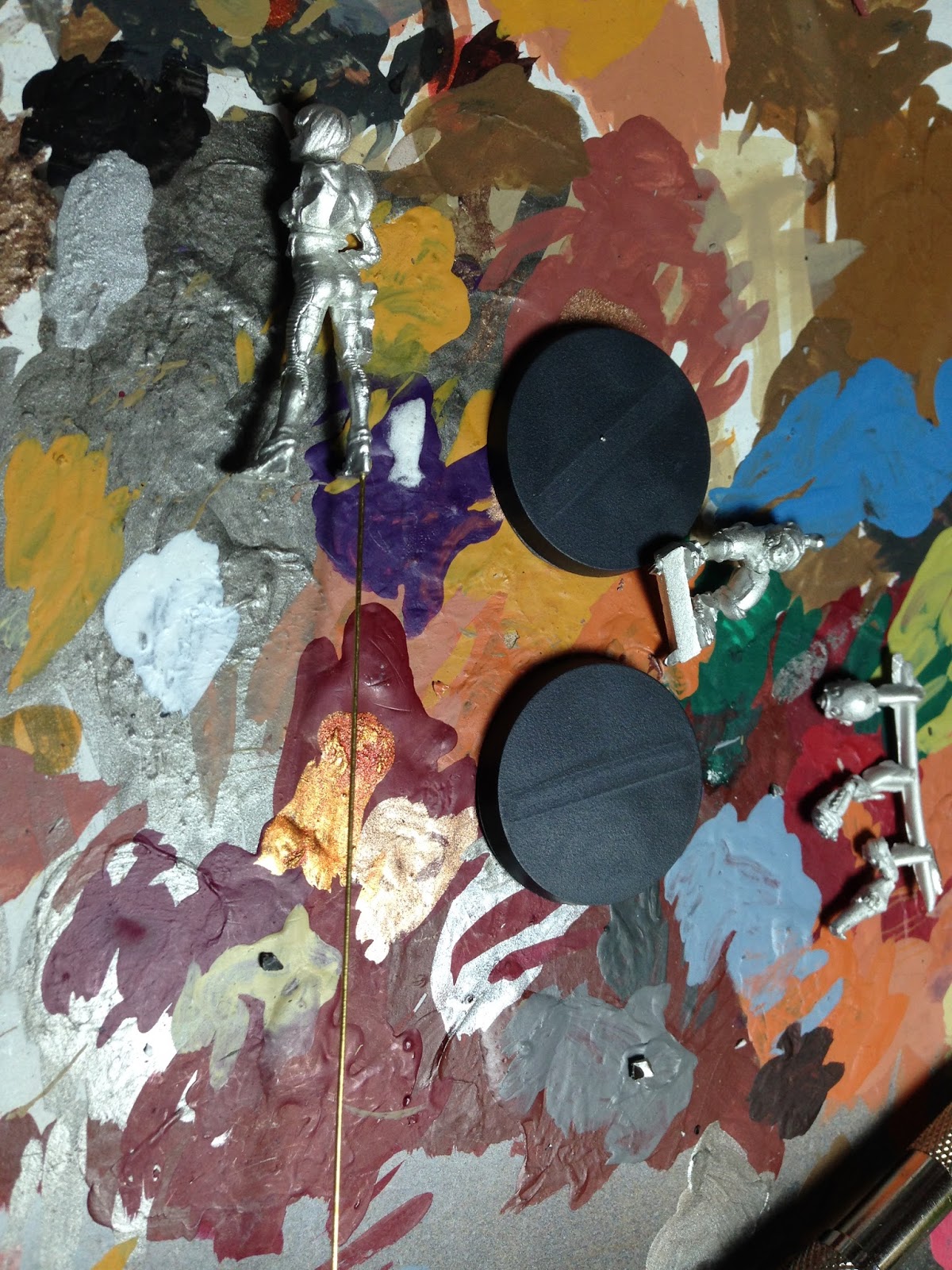 And it worked pretty well. I managed 5 Pomodori on New Year's Day, getting all sorts of things sorted, from starting assembly and preparation on Zoe and Pi-Well, through to actually getting some more paint on the infamous Herald of Tzeentch. 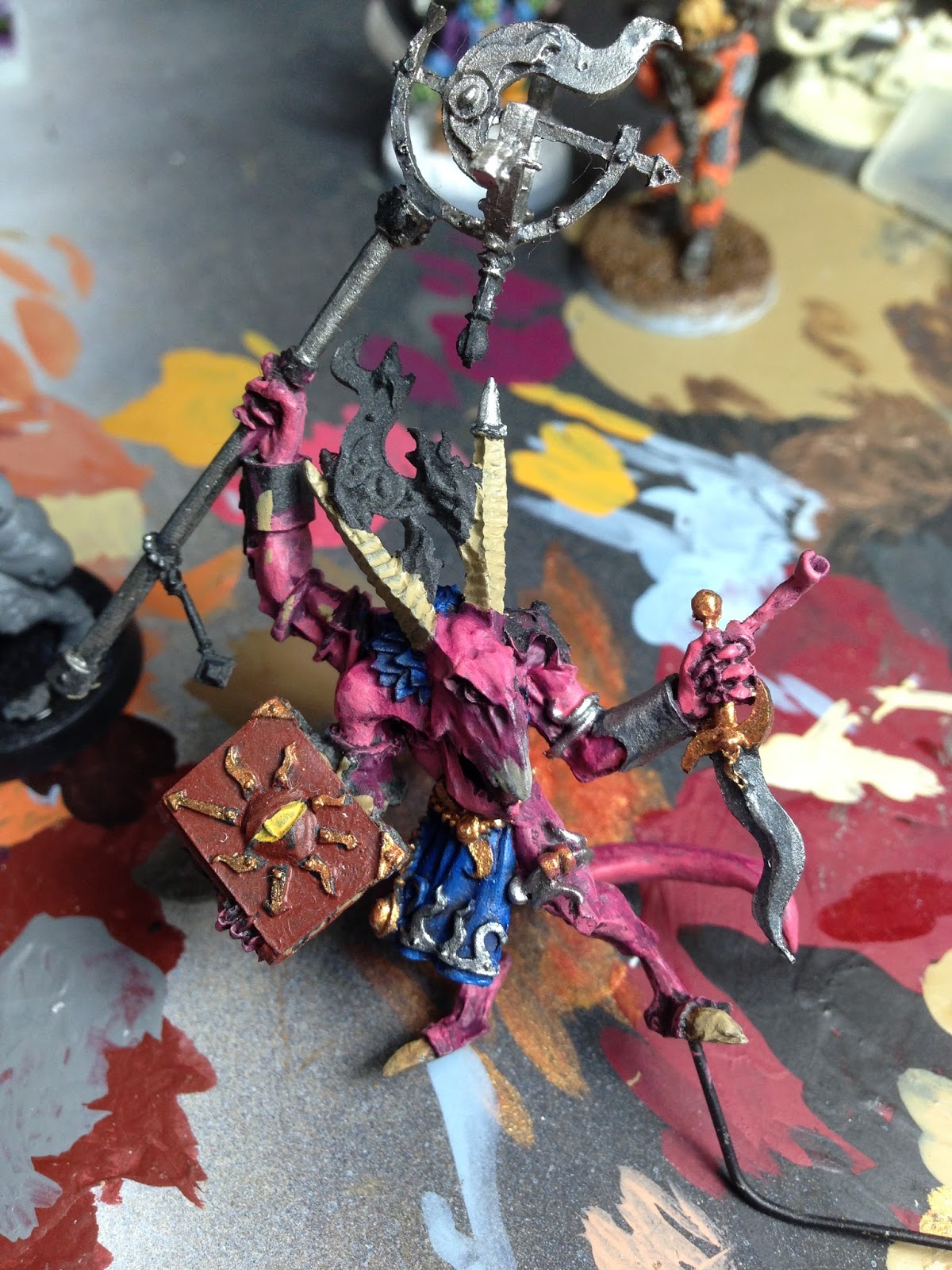 I then ran into the problem with Pomodori, because I then didn't get anything done for two days. The Pomodoro technique is really useful for keeping on working once you've started - several times after fifteen minutes I'd finished a thing, and instead of slacking off and stopping, I went and did a little more on something else. It was super helpful with that. What it didn't do was help me get the willpower to start.

This is where I'd really recommend people think about spending an hour a day at their hobby and making it a habit. I heard about this on the Independent Characters podcast, and some wags have started calling it #tuttletime (currently doing OK on Facebook, not trending on twitter). Poor Carl. As he rightfully points out, he had the idea suggested to him by Paul Rudge, but "Paul Rudge Points" or "Rudge Recurrences" just don't have the same alliteration. 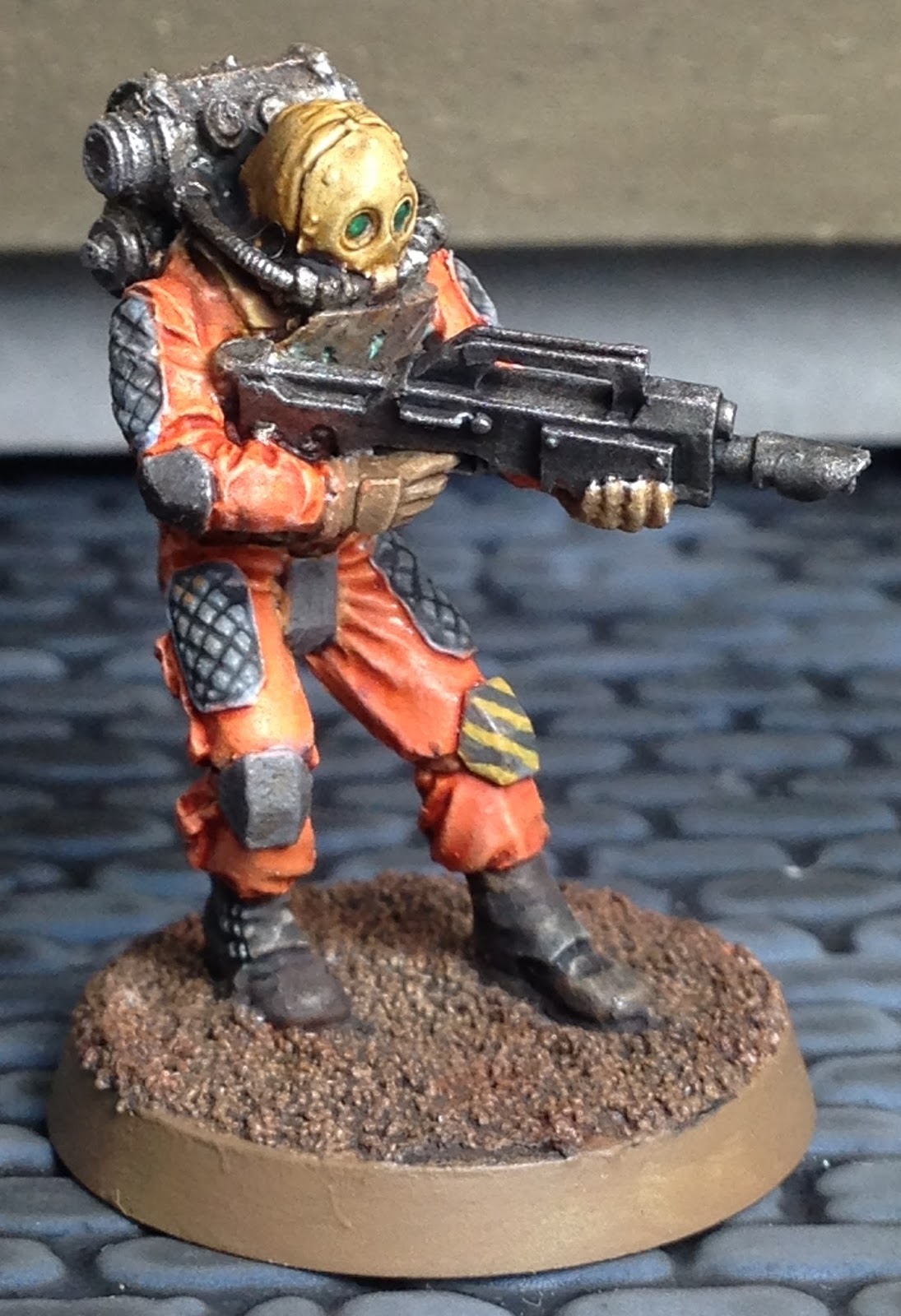 Still, the time was useful, and I did get some more painting in later in the week, as the renegade / cultist is finally done. I also bit the bullet and sent out the Exalted Slaanesh Daemon to Golem Painting Studio. I think after having something more than four years which is a present for something else is the point to admit you're probably taking too long doing it... I'm also super excited to see what they do with it.

So, how are my commitments looking one week in?

Posted by The Responsible One at 18:43 2 comments: