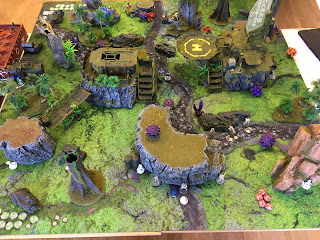 So, a short while ago I and a couple of the other members of HATE headed up to St Albans for "St Albans Smackdown III". I was rocking my usual Corregidor and aiming to get two wins out of three games - historically I usually get a win and two losses, and I'm just trying to edge my game up to that second win. 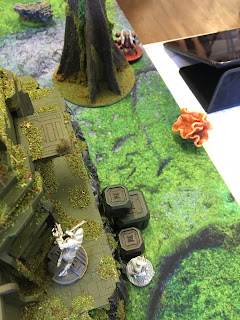 First up, I was playing The Gungrave in a Corredigor mirror match, with the mission being Acquisition. Well, I say mirror. More "beautifully painted Corregidor against unpainted Corregidor". I have a plan to deal with that so I won't dwell on it further. 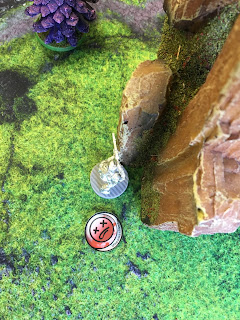 I had some pretty poor luck in addition to being outplayed. The combination of the two didn't do well for me. My 3 person Mobile Brigada link lost the HMG to two failures with me at optimum range and the target well otu of it. So frustrating! 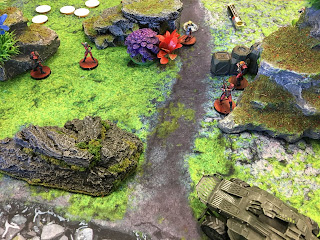 Meanwhile, the Gungrave was running an Alguacile link with missile launcher and Lupe, who did some real work. He meticulously took me apart. 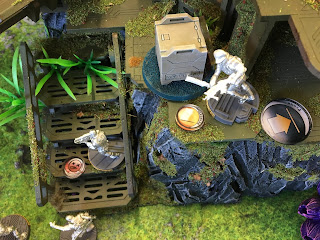 A bit too meticulously, in fact! Putting me into retreat, he wasn't able to move up to score, leaving us tied for the game, due to a retreating prone bandit holding a crate. A 2-2 draw, which for a short moment we thought I'd won until we realised the Gungrave was unintentionally securing the HVT. I had a mere 57 points alive at the end of the game. Brutal! 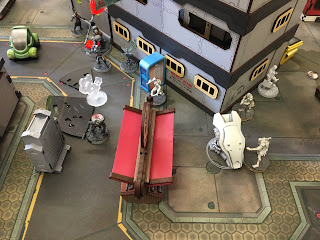 Next up, I played a local, Nog, who was running Steel Phalanx. He won the Lieutenant roll, and as the mission was Frontline, chose to go second. It was a really good solid "back and forth" firefight, with both of us challenged for most of the game, but in the end, the second turn advantage helped him get the game. While I had slightly more points surviving (a difference of only 14 points), he was controlling all three zones for a solid 9-0 defeat on objective points. 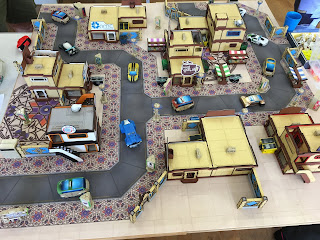 And finally, a nice simple Firefight against Jerp, who was running vanilla Haqqislam. 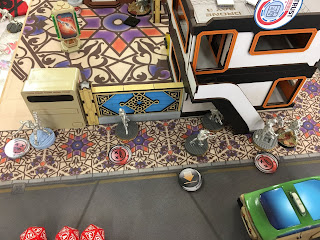 This game could roughly be summed up as "I still don't know how to deal with Fidays". A boarding shotgun ruined the Wildcat link, and I never really recovered. 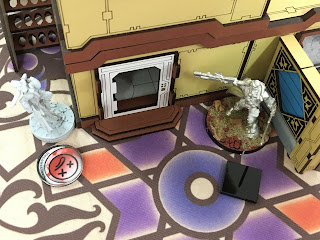 Even bringing on a Spitfire Hellcat was ineffective, as Tarik took all the shots into his back, turned around and crit the Hellcat off the table. If anyone has any good anti Fiday advice, it would be much appreciated. I took a thorough 10-0 drubbing with only 52 points left on the table.

Ooft. Aiming for two wins, and only a single draw to show for it. Still, everyone I played was lovely, and it was good to meet a new Infinity scene. Team HATE went for a pub dinner afterwards once we found somewhere without too many football fans in. I was feeling a bit demoralised, but we had a good chat about the wider Infinity meta and future plans.
Posted by The Responsible One at 18:47 4 comments:


With time remaining a precious commodity, I've decided to engage the services of some commission painters to get some painted models on the table. First up is Aodhan, a fellow member of HATE. I've asked him to paint up the models I have picked up for Druze Bayram Security, for Infinity. I'm intending to use them for ITS Season 10, which starts after the Interplanetario tournament in August.


Aodhan and I have been talking about this colour scheme for a while as he finished up some previous commissions. Using a couple of his own models, he sketched in a rough idea of what the figures woudl look like as I am really bad at visualising things. I found this super useful to get an idea of what the models would look like when done.


Once the plan for the figure and the base were agreed, he's cracked on with the models, as in the first photo. Now, the 'sketching' isn't free - I'm paying him for his time! But it's a really useful thing you can sometimes do which really helps communicate between commissioner and artist.

Aodhan will have a few more batches of Druze to come once he's got through the batch he has now. I'm really looking forward to getting a fully painted force for Infinity onto the tabletop... Meanwhile, once the house move is done, I plan on starting to paint up my Nomads, but I suspect that is going to take me a while, even with a dedicated painting area. Meanwhile, I've sent an assortment of goblins off to Brushchewer Inc, a painting service up in Scotland. I've realised that really, what I'm excited about with my massive goblin collection is the idea of the visual of the army, not necessarily painting it for myself!

So, with AoS 2E having released, I've asked Brushchewer to punch out a regiment of 20 assorted goblins to see how they do. If it goes well, I'll keep pushing them goblins until they're sick of them! My idea with this is to get a playable 2,000 point Age of Sigmar force painted up and start playing some games to learn it. I may not keep the goblins forever - I have an Order force in particular I have some ideas for - but they will exist in the world and I'll be happy about that, even if I end up selling them on to a new home after playing with them a while. 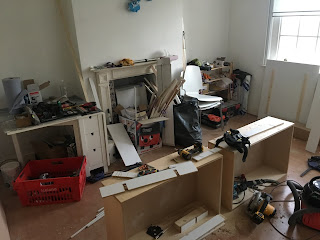 The new hobby area isn't quite there yet, but I'm pleased I've managed to come up with a way of getting some hobby progressing along!
Posted by The Responsible One at 23:00 No comments:

Infinity Tournament: essexdave is getting married! 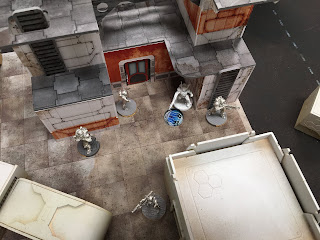 We were playing 300 points, with the modifiers "Limited Insertion" (keeping us to one combat group) and "Soldiers of Fortune" allowing us to taken mercenaries. I am continuing with my plan of running Corregidor - running one list with a Mobile Brigada link and Avicenna, and a second for Transmission Matrix, with a weird smorgasboard of bits and pieces, including McMurrough, Senor Massacre and Avicenna. 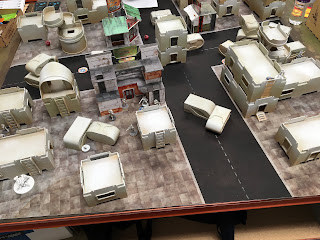 My first game, Firefight, was against aphexblue, who was playing the Shock Army of Acontecimento. He tried to pin me down with a Bagh-Mari fireteam and a TAG, but by a bit of aggressive play and some lucky crits, I got them neutralised. A Naga hacker in the midfield on a roof caused me some woe, but I managed to pin it down with Crazy Koalas, leaving the Brigadas able to run and get an extra panoply. A last ditch effort by Stephen Rao to take the link out was stopped short with a crit, leaving me winning 5-0. 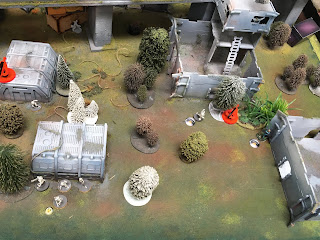 Next up was the terrifying Bobman in Transmission Matrix. He was running the new Tunguska, with bikes that transform into robots, brutal hacking and general woe. Senor Massacre was given the job of taking out the Designated Target, and then failed multiple orders to try and land Eclipse smoke in the right place, then on his last order made it into hand to hand only to have the target crit it's dodge.

It went downhill from there. Bobman would feed units into the central objective to score the points each turn, and while I'd shoot them down in my turn, he'd just replenish them, scoring him an 8-2 win as we ran out of turns before he ran out of models! 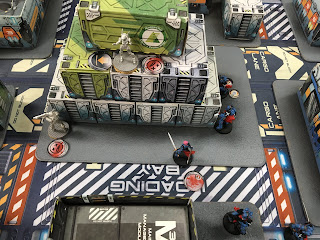 And finally, it was Frontline, where NiceGuyRosen demonstrated that getting into a straight firefight with a full Hospitaller link with Joan is not going to go well... The game ended with me having nothing on the table, and he picked up a solid 7-1 win.

As always, the games at Wayland were excellent. The heat was a bit much, but we soldiered through. I was joined by three other members of HATE who were good company on the train there and back. I'll definitely be along again when the tournaments start up again.
Posted by The Responsible One at 13:05 No comments: