I'm having a bit of a slack hobby period, but I thought this might be of interest to some. You might recall I picked up a bag full of the dice tins done up as lasgun power packs at the Overlords Bring and Buy...

This is what they were for. This is a modded Nerf gun mocked up to use one of the tins as a clip. It's intended for use in the No Rest for the Wicked LARP. This is just a first pass, and I expect to see some prettier examples in time.
Posted by The Responsible One at 21:32 2 comments:

Email ThisBlogThis!Share to TwitterShare to FacebookShare to Pinterest
Labels: Astra Militarum, events, Imperial Guard, LARP, No Rest for the Wicked, other sites

A few bits and pieces from Games Workshop: London Plaza

I'm feeling pretty slack this week, so here's some filler pictures taken at Games Workshop: London Plaza. It's an assortment of bits and pieces which might prove inspiring to people. 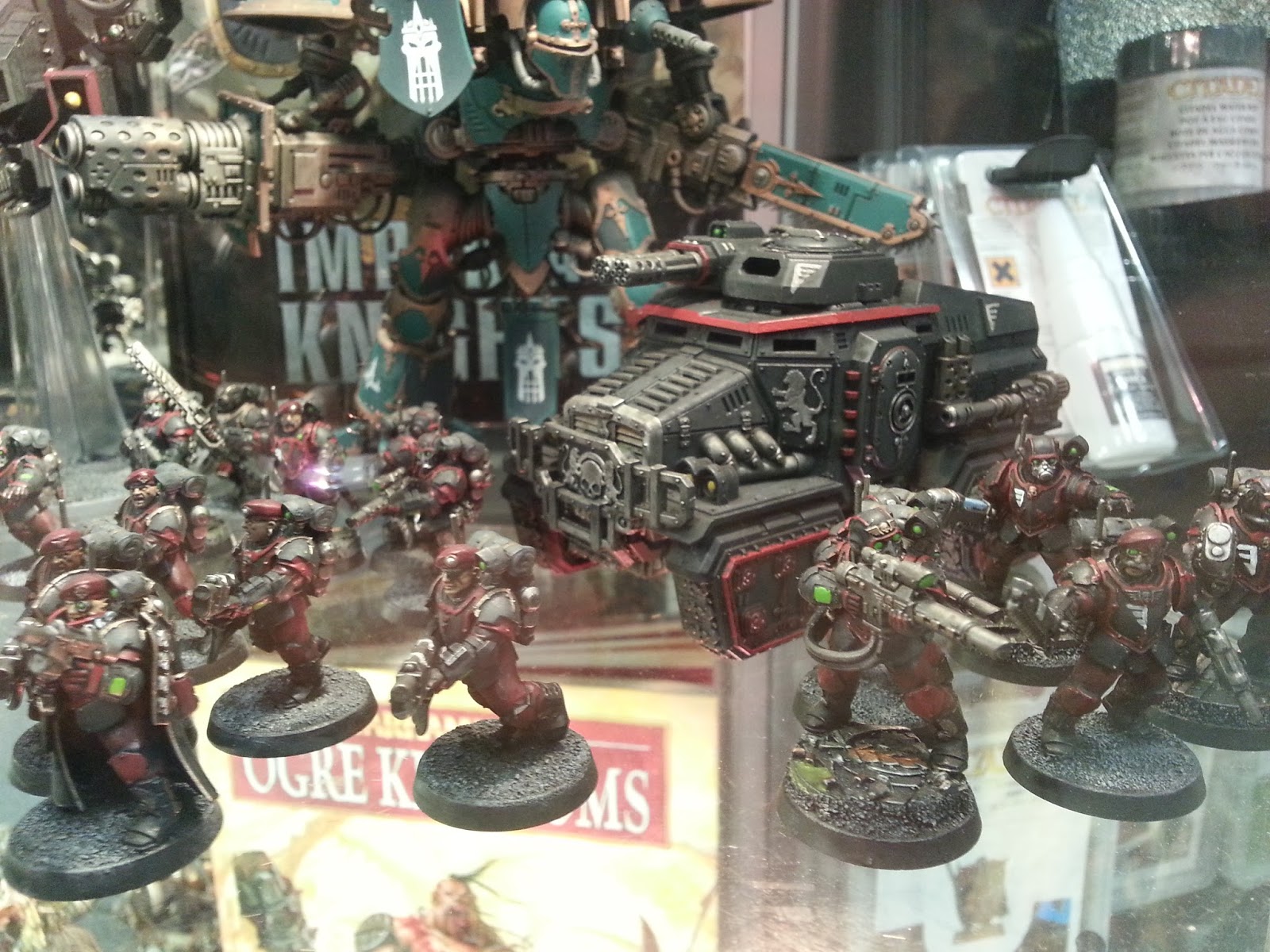 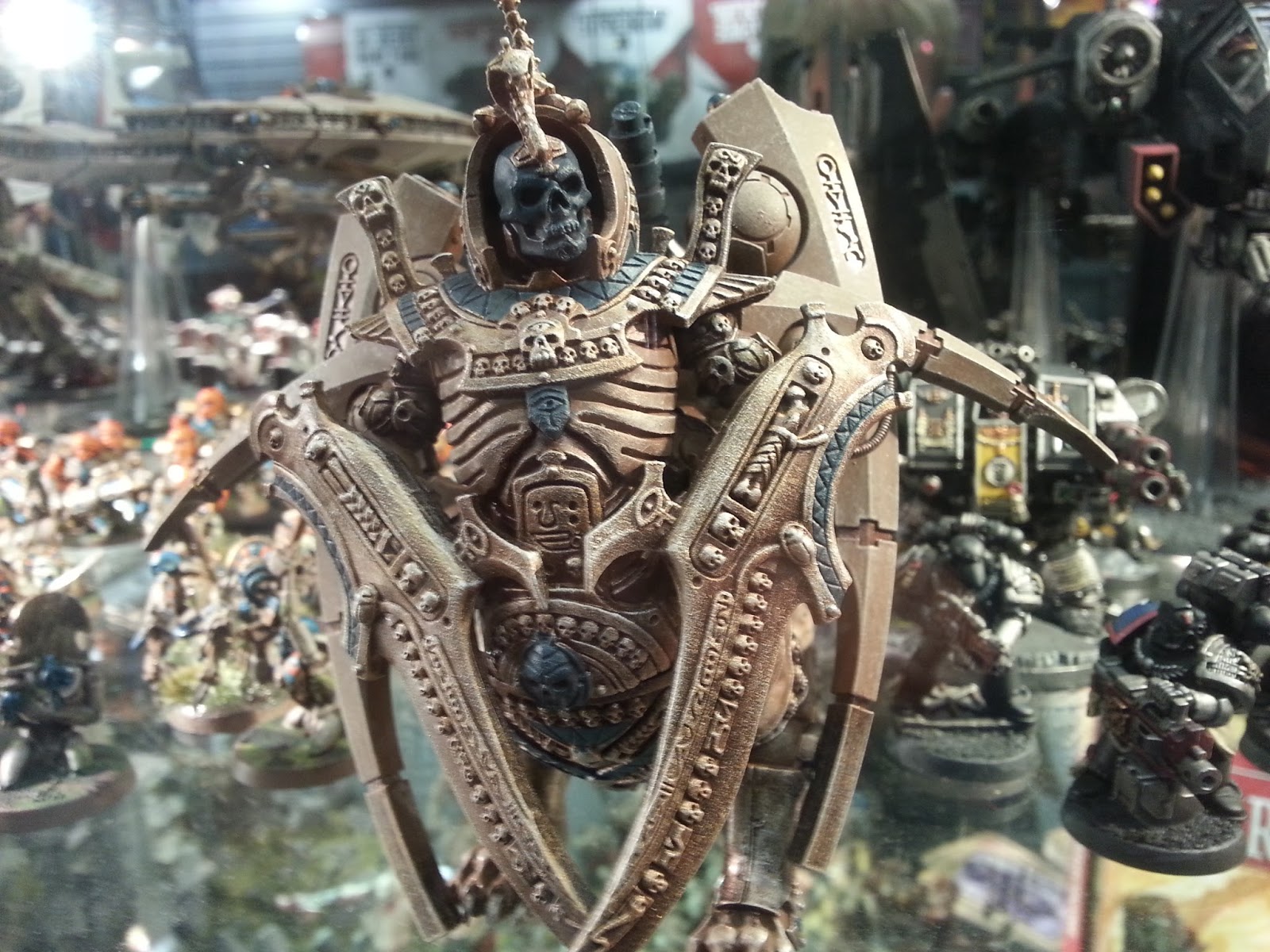 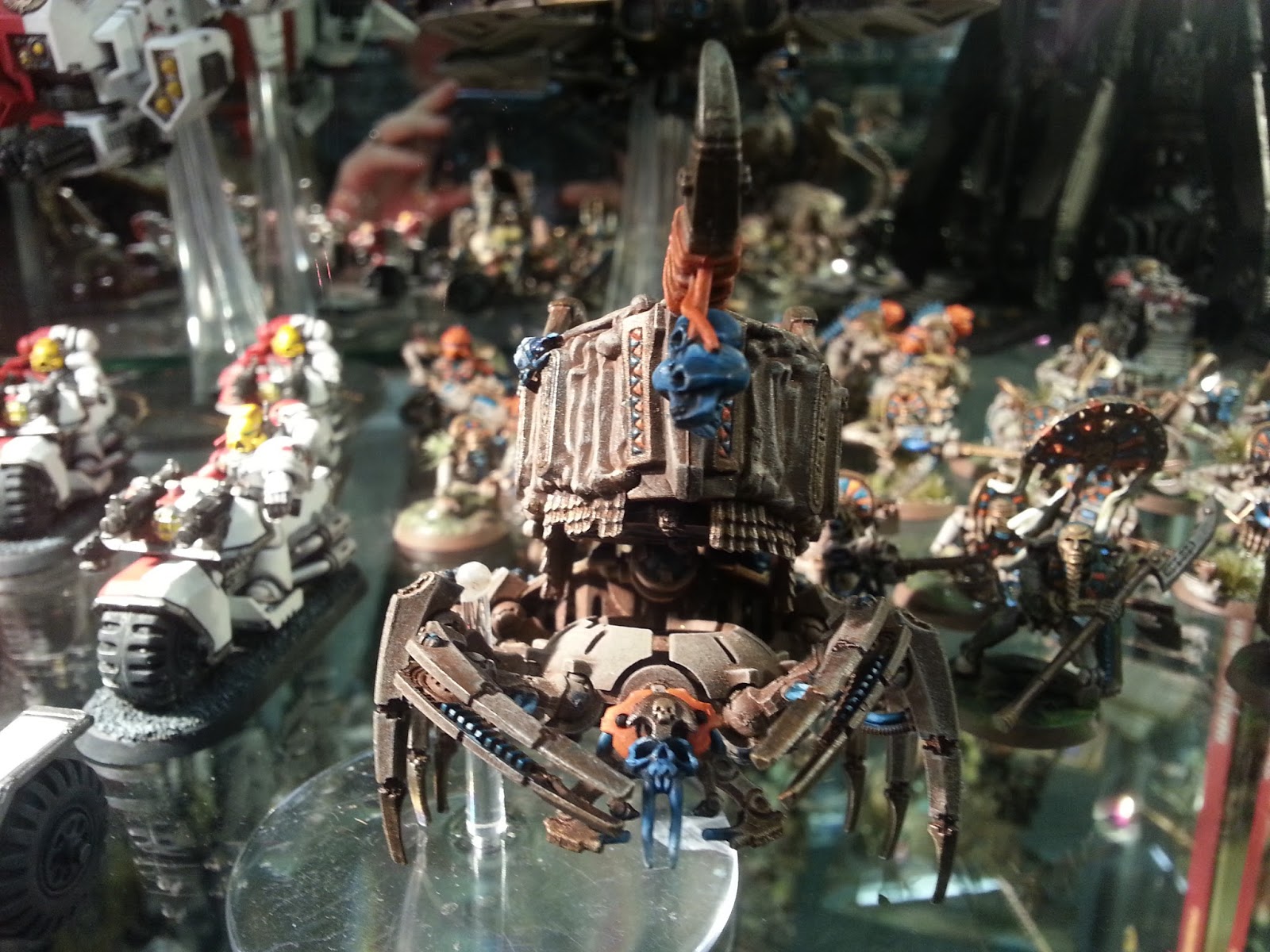 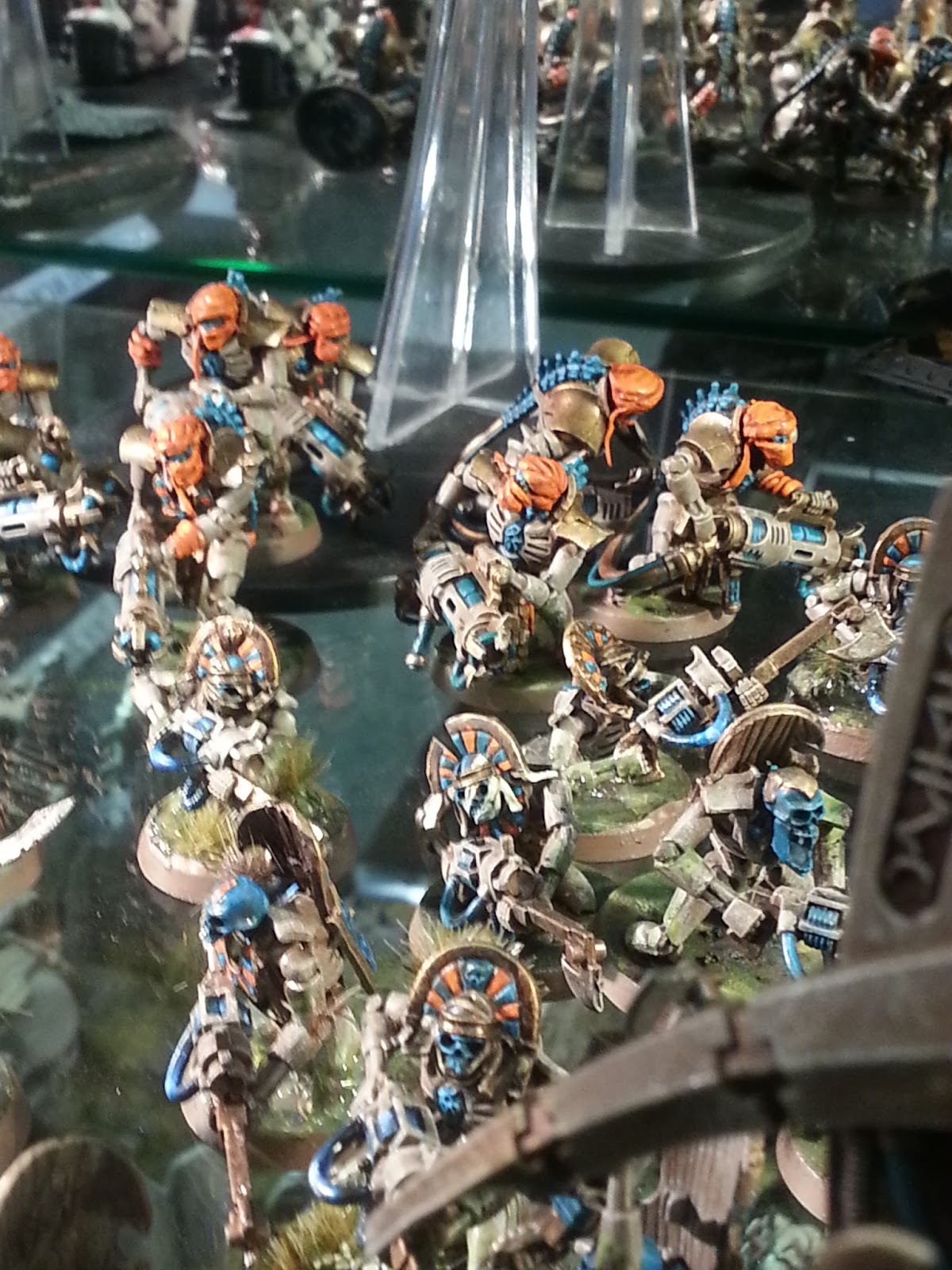 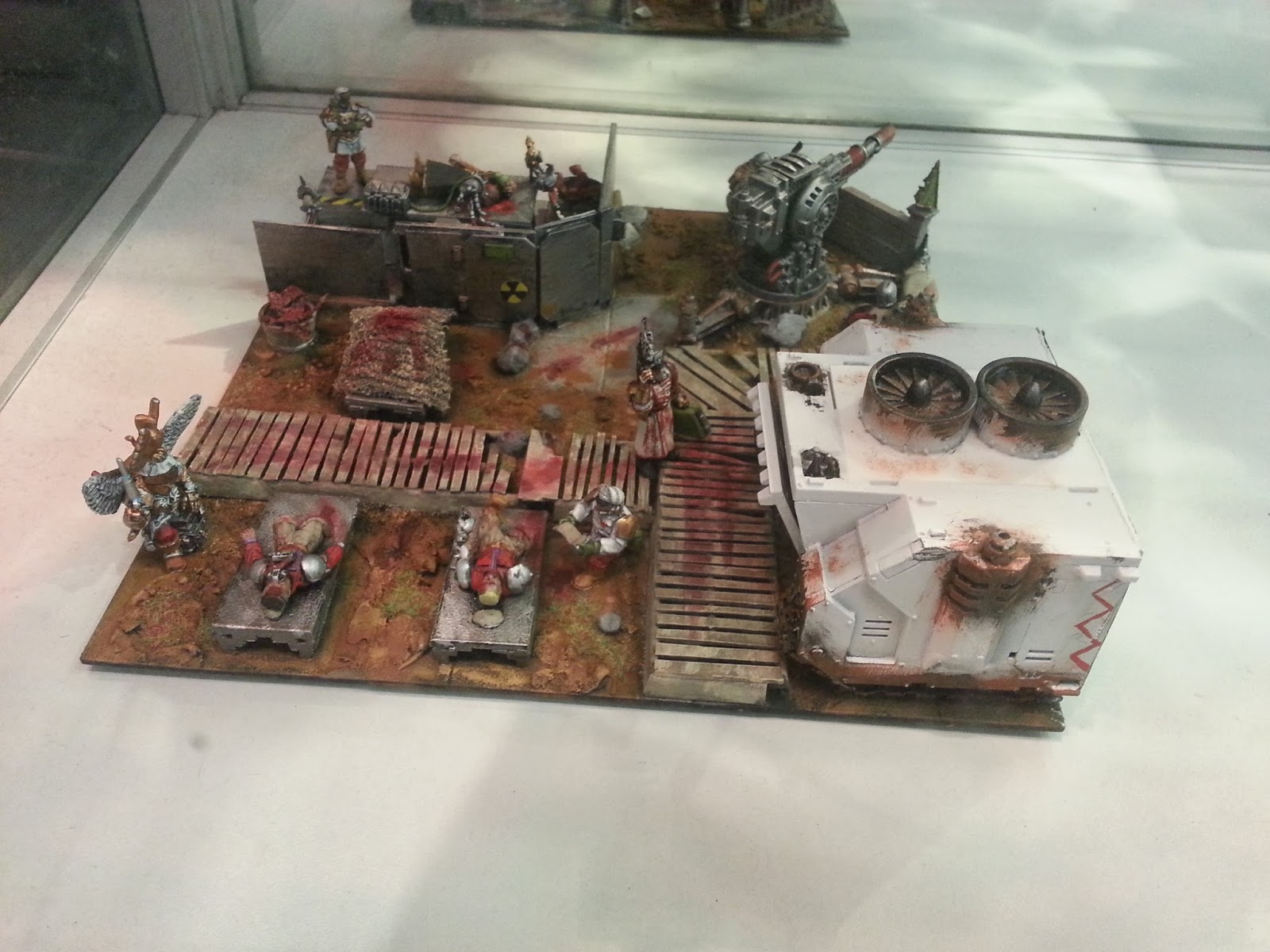 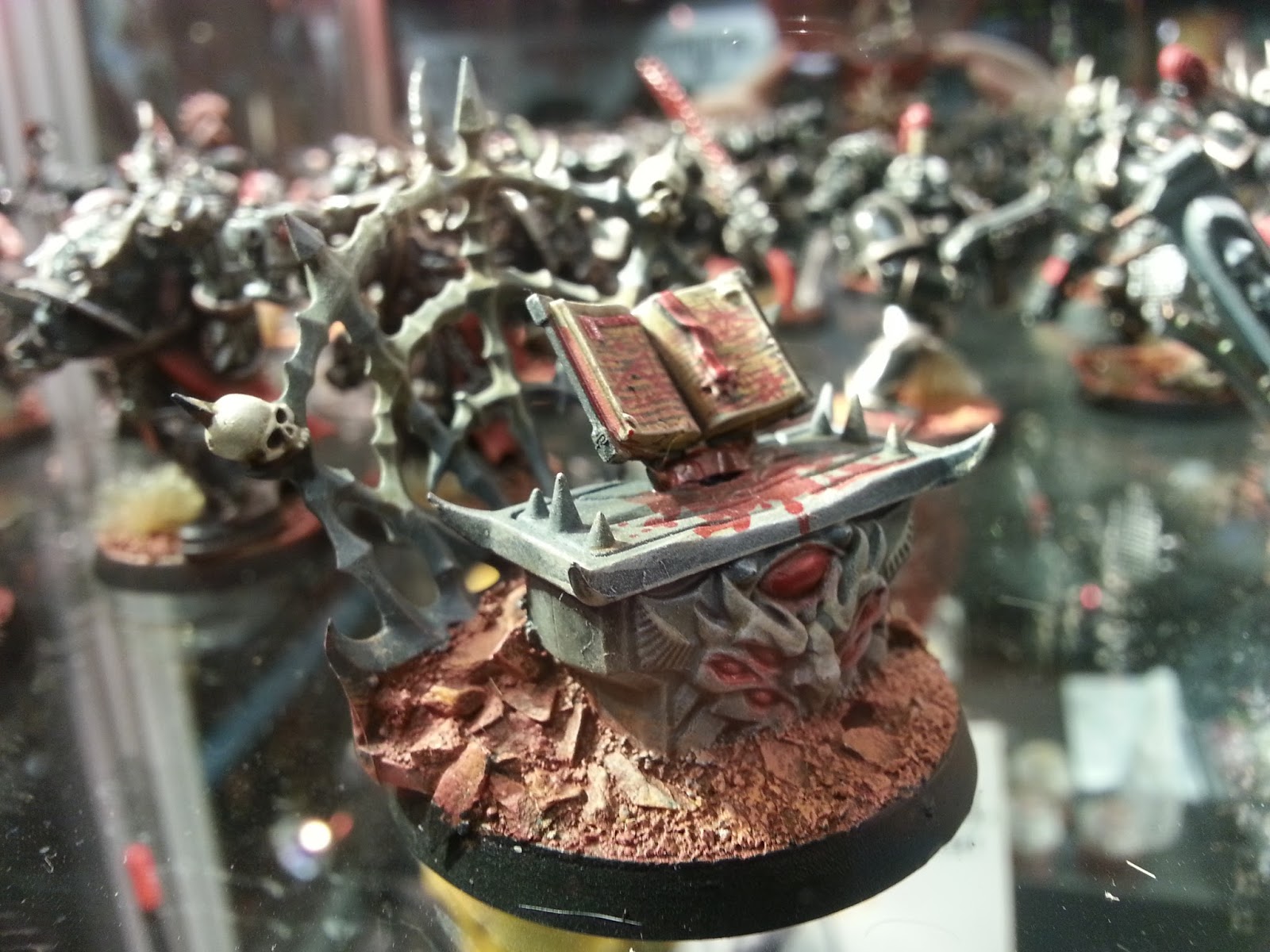 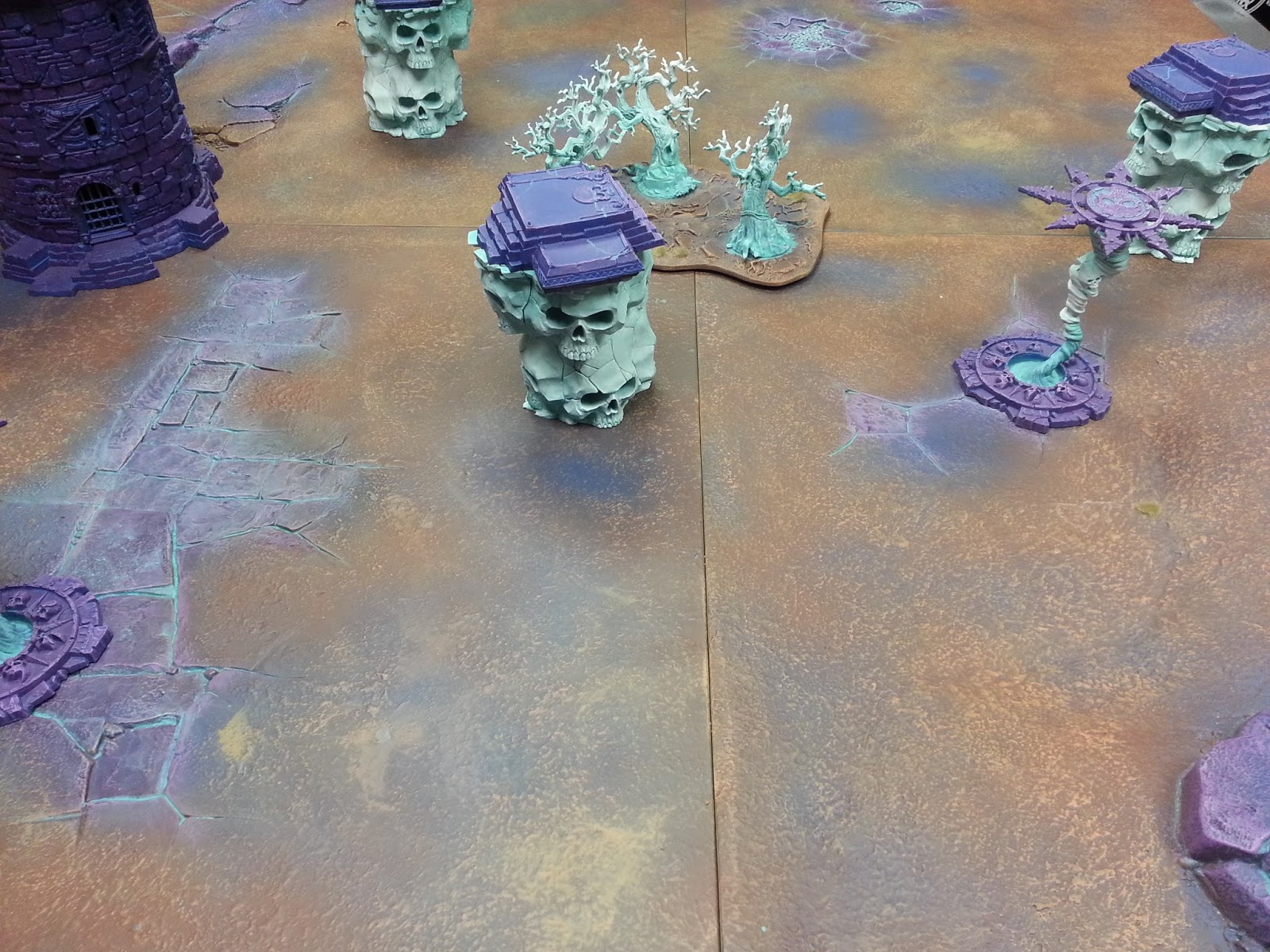 Getting back into the swing of things

With a couple of weeks going out and buying and trying to sell stuff, I hadn't got much (any) painting or modelling done. As a result, I was having trouble getting back into the painting and so on, so I thought the best thing to do would be to get a couple of easy 'quick wins' in to get back into the swing of things. 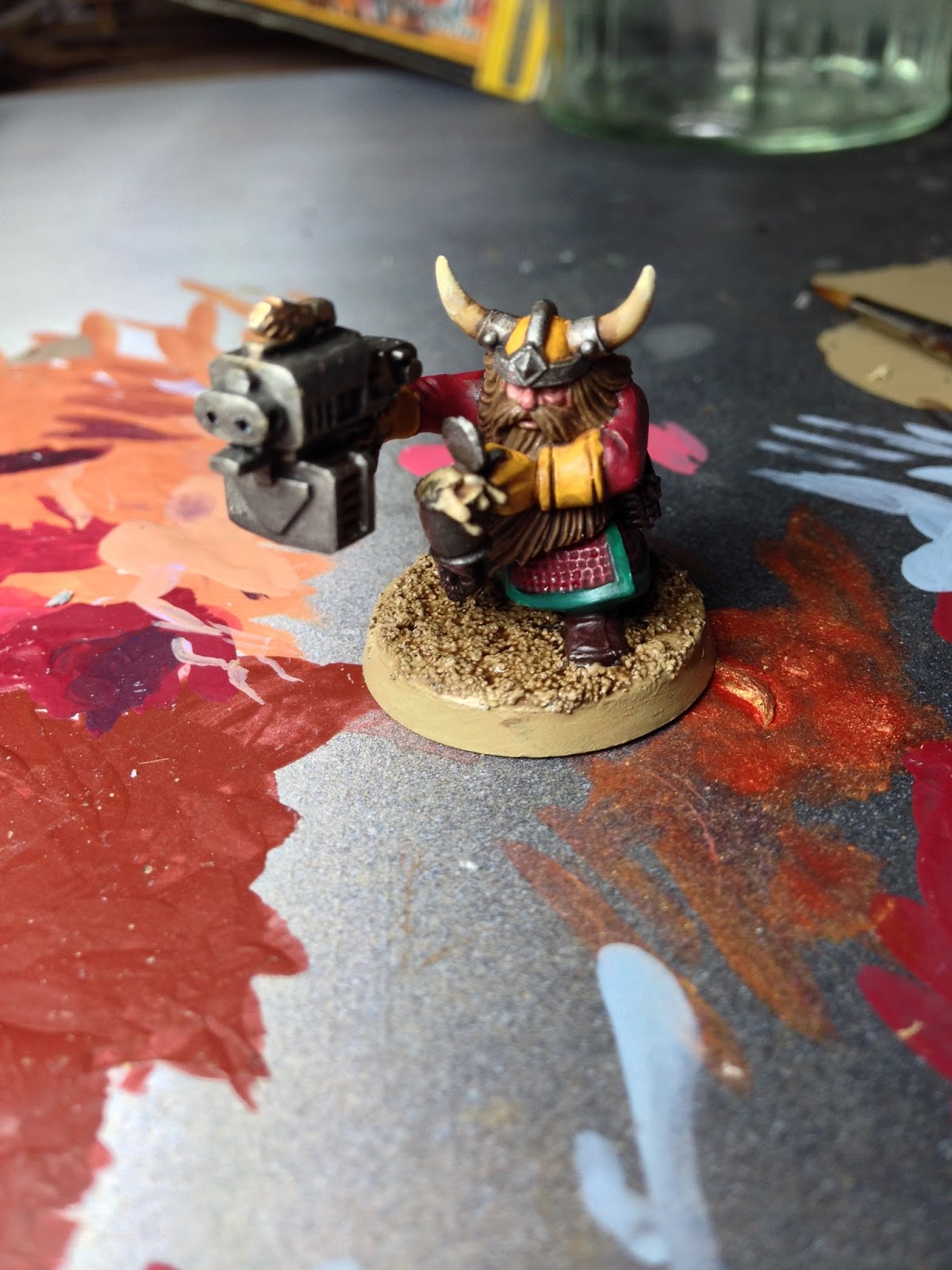 First up, I managed to finish off the younger of the two Squat mercenaries. I'd thrown a little base coat onto him, but that was as far as he'd gone. 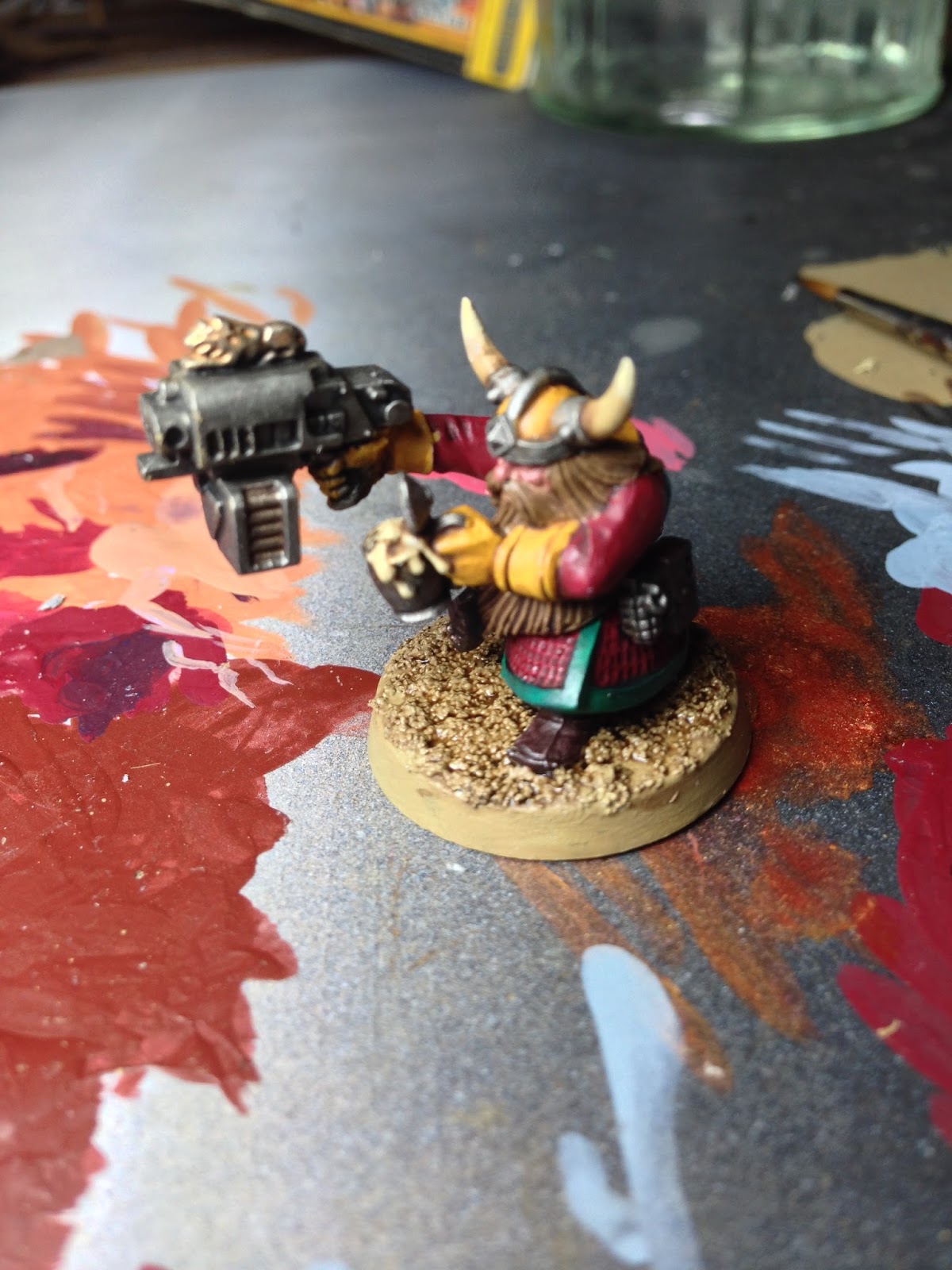 Like his older colleague, he's painted up in colours to call back to the old Rogue Trader Squat Leagues. Some people have felt that his Storm Bolter is a little disproportionate, but I'll live with his gun being ridiculously over-sized. If I'd had a little more modelling time and effort, I'd have modelled a suspensor field on as a flimsy justification for the massive firearm - but he'll be fine. With the Squat done, I wanted to get a couple of quick wins lined up for when I was next in the mood, so I had a dig through what I had around. First up was this Chaos Renegade, who is a kit bash of Forge World renegade and Elysian parts. He was part of one of the purchases I got at the Overlords Bring and Buy. 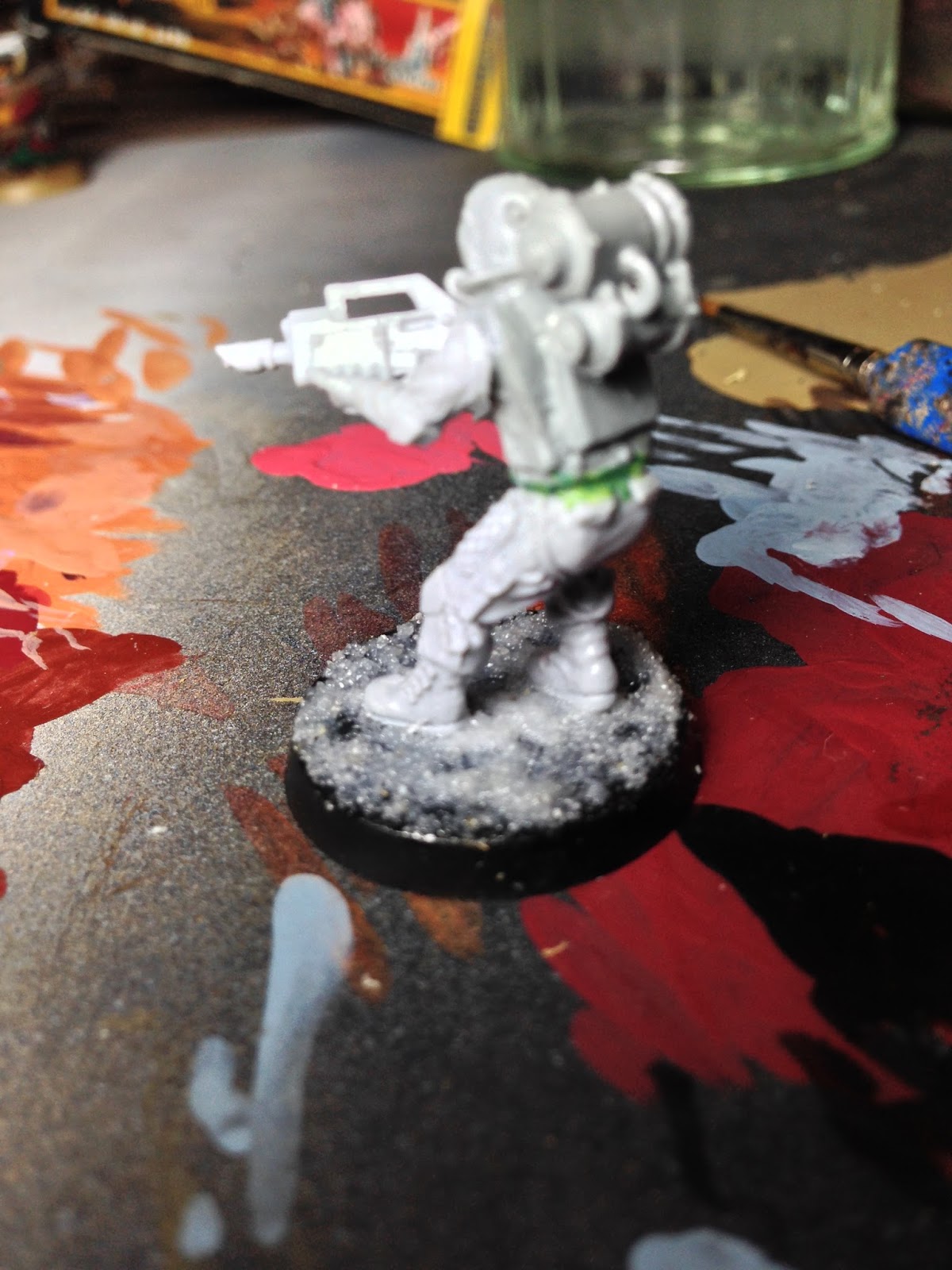 He had a little gap at the back where the larger torso didn't quite fit, so I got his waist filled in with some green stuff. I have some interesting ideas for painting him, so we'll see how he goes. 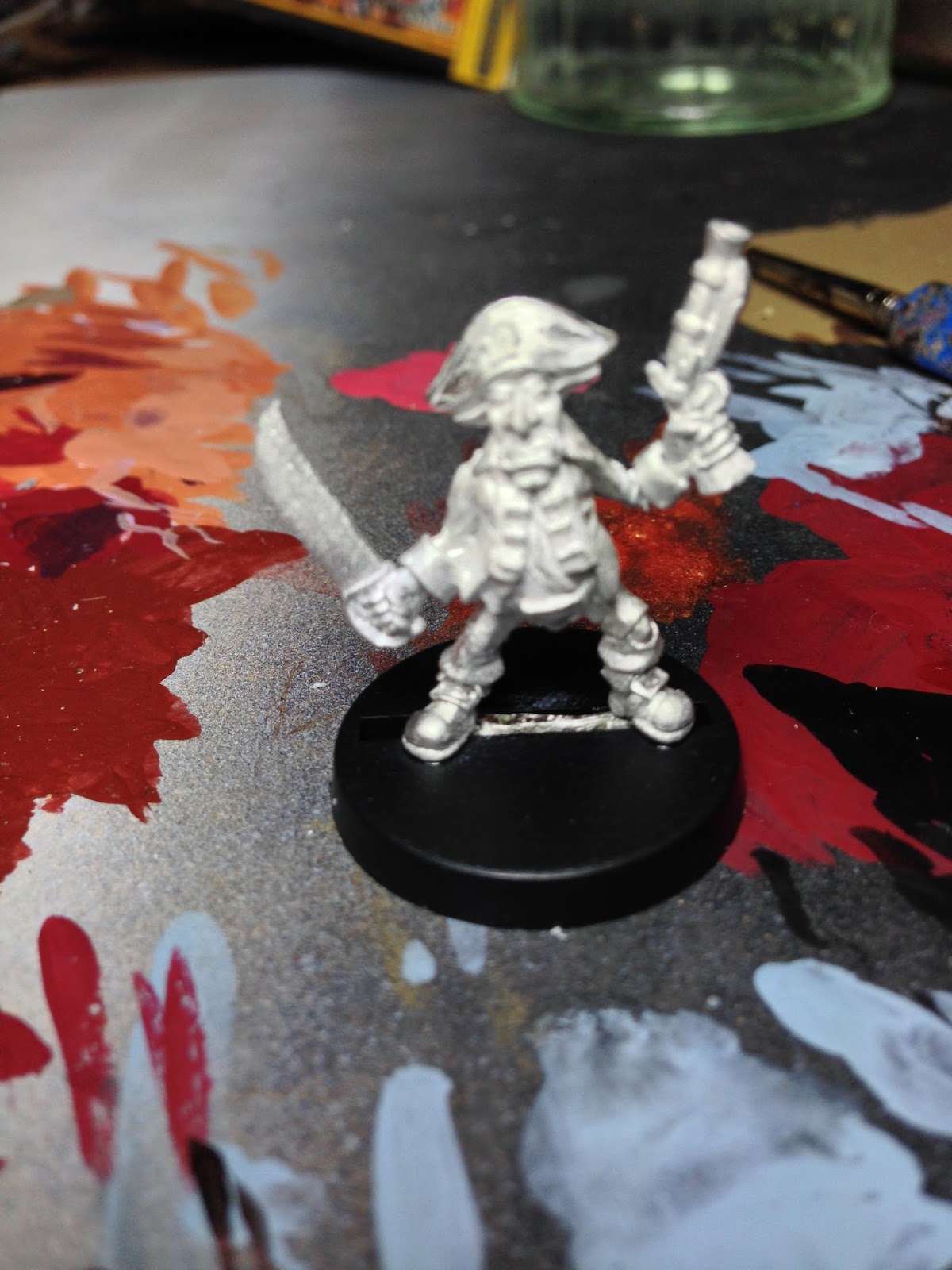 I also got a goblin painted cleaned and glued to his base. This is one of the GoblinAid goblins - a pirate goblin by Stuart Powley. I've also filled in the base with filler now, and will also texture the base before I get him undercoated.

All in all, I'm feeling like I got some nice quick wins in and I'm motivated again to get things done with my painting. I'm starting to get a system in place for getting things done. I like systems. They make me happy.
Posted by The Responsible One at 18:26 1 comment:

I regularly listen to The Overlords Podcast on the way to work, and when I heard they were having a Bring and Buy event, I decided it was time to overcome my recent slackness with ebay-ing off old stuff I'm not using any more and have a bit of a clear out. My wife was also super enthused about the idea of offloading stuff, so also headed over. 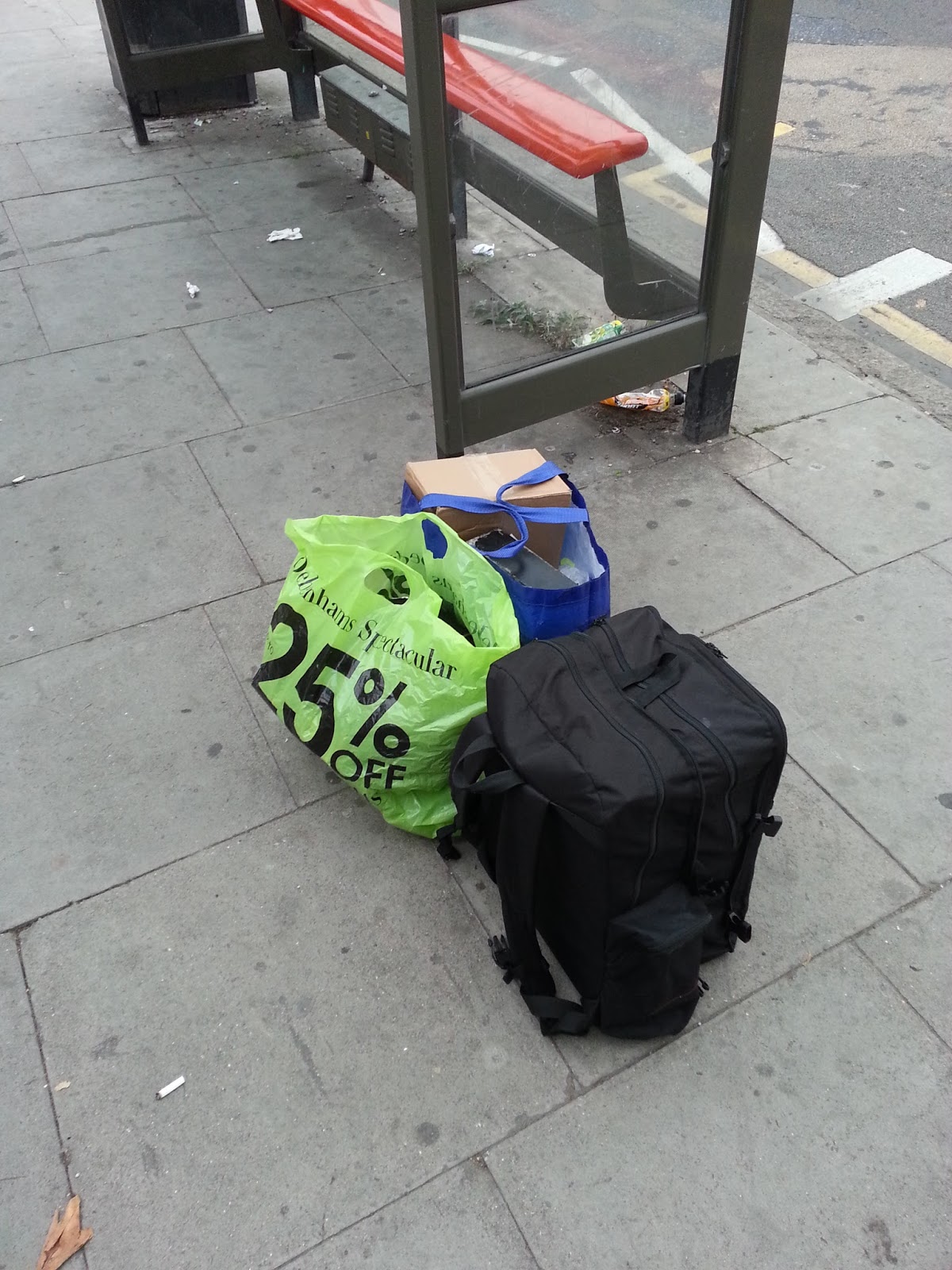 As my wife was cycling there, I had the unenviable job of lugging everything else to the venue - a scout hut somewhere between Barking and Dagenham. 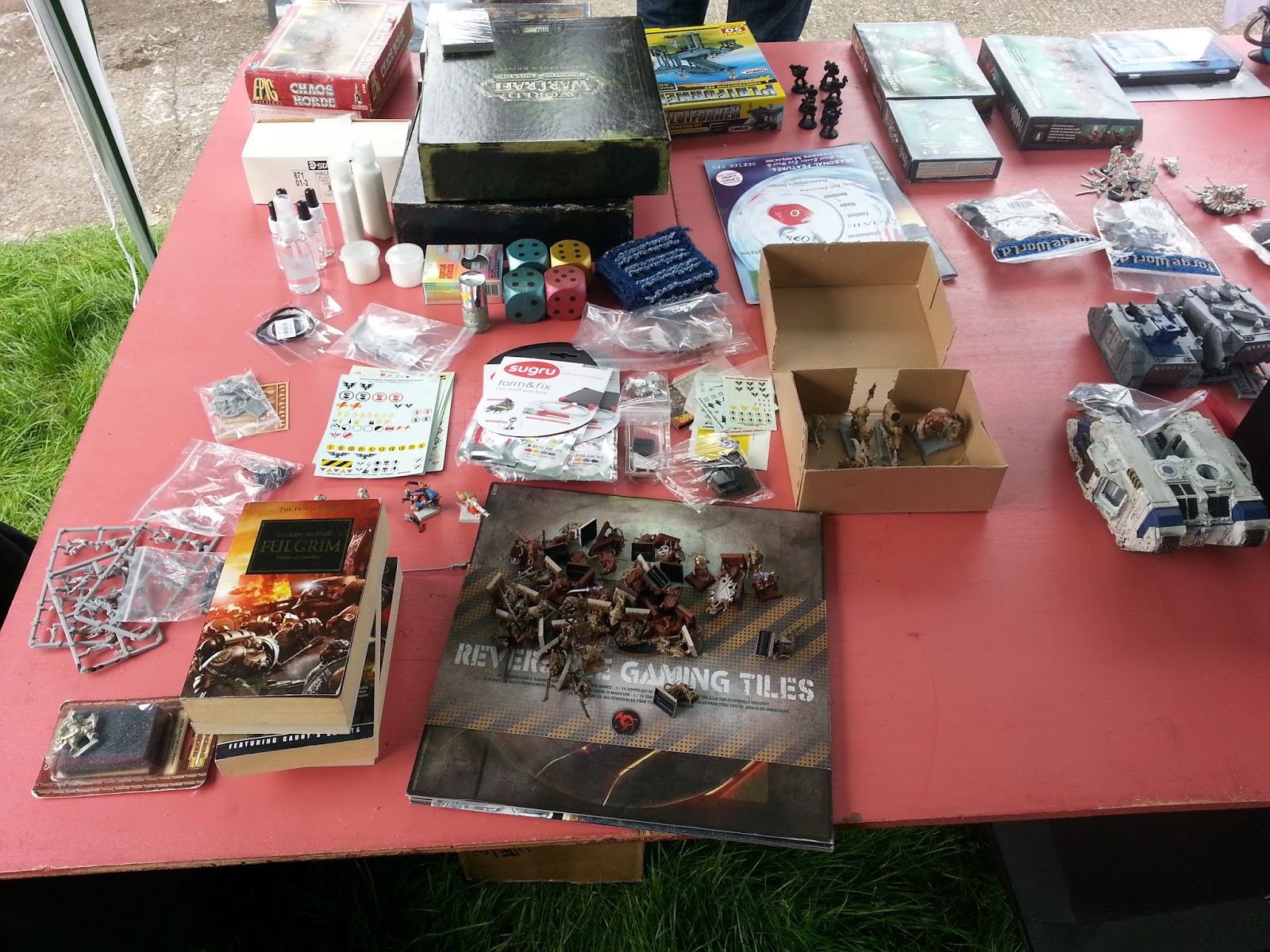 My wife and I laid out the stuff we had to sell next to a chap who was selling off some Horus Heresy stuff. My wife only smacked me a few times for looking at it covetously. 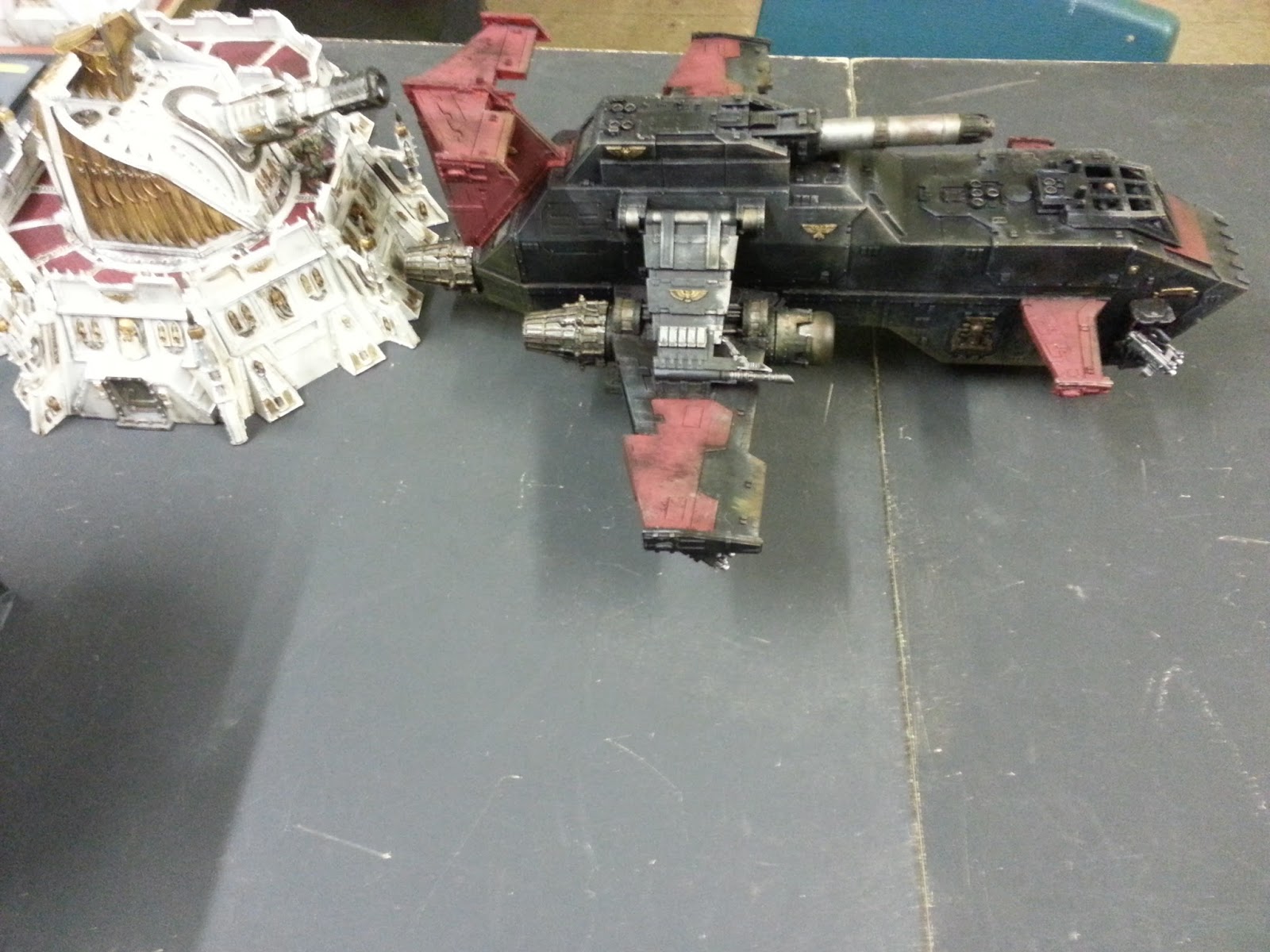 I popped into the hut itself to see the "Haven" event which was going on in the main area. You can find more and better pictures of the event itself on the Overlords Facebook page. 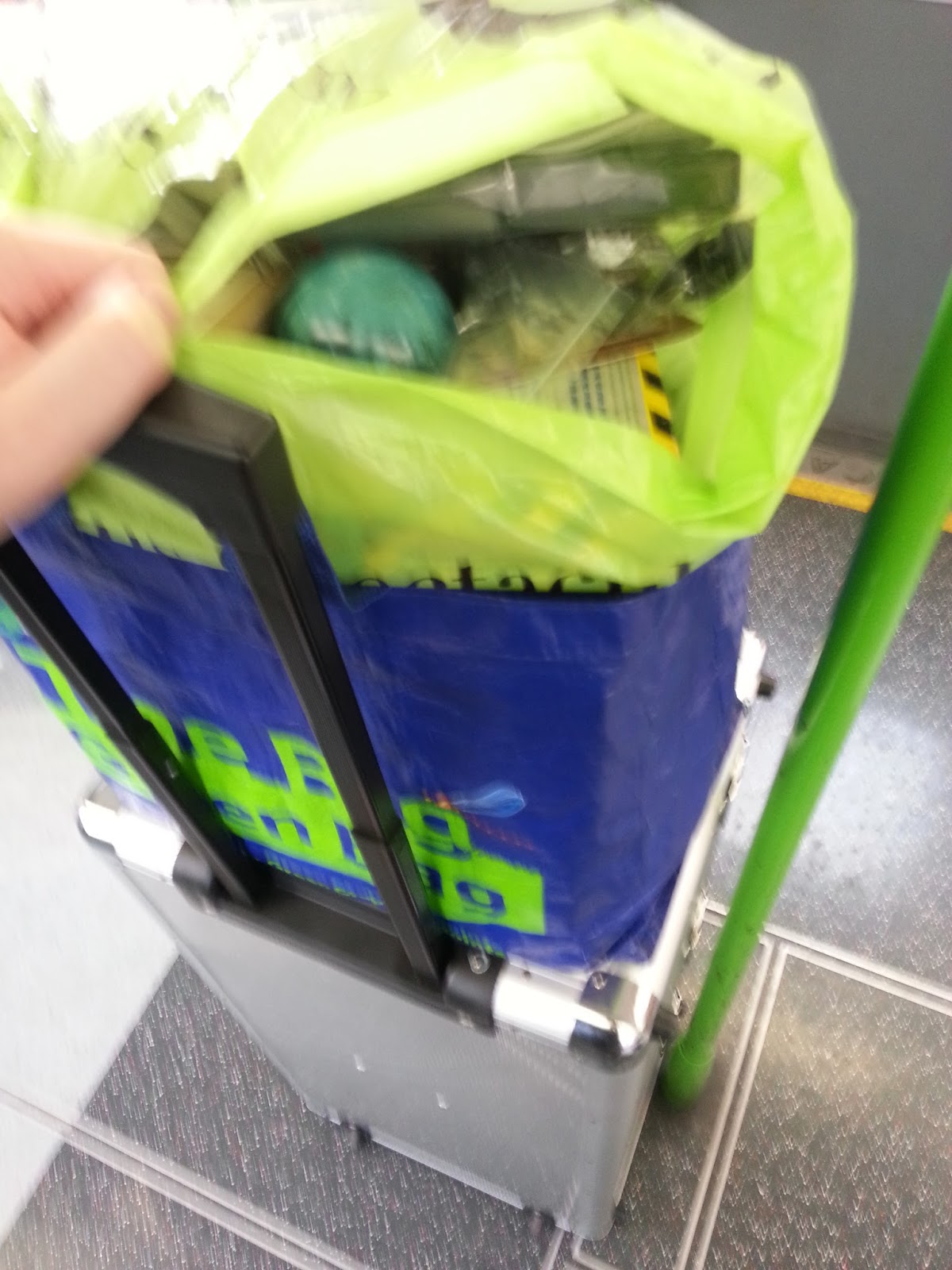 Wait. What just happened? I'm going home with more than twice as much stuff as I took. Where has all my money for change gone? And the money I made selling things? I haven't been robbed - I just have poor impulse control (and so does my wife). She managed to pick up some more bits and pieces for her Dark Eldar and her Orks. So, what did I pick up? 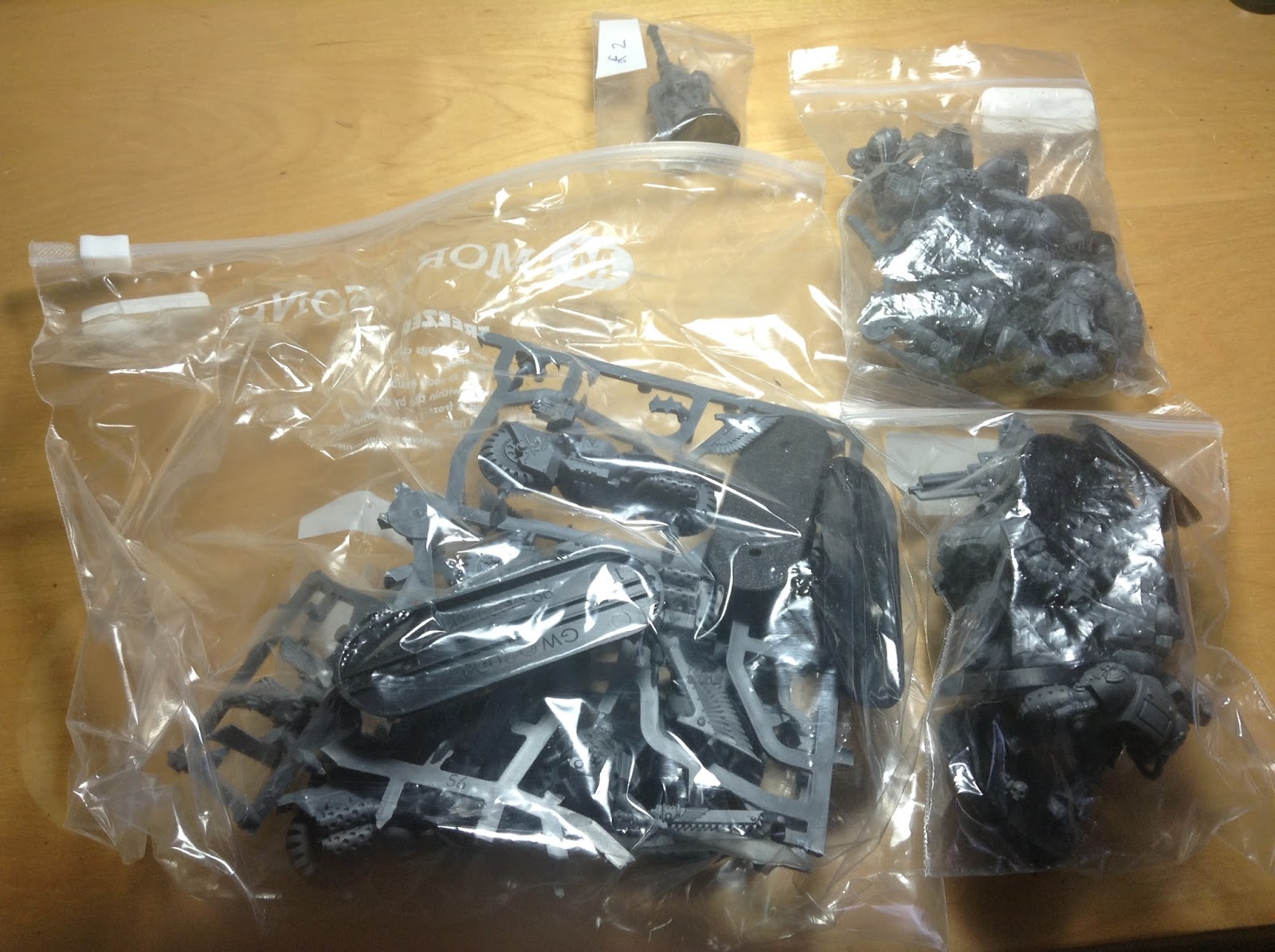 One Dark Vengeance set of Dark Angels, less the Librarian, which I swapped for a box of Al Mukhtar's Desert Dogs. 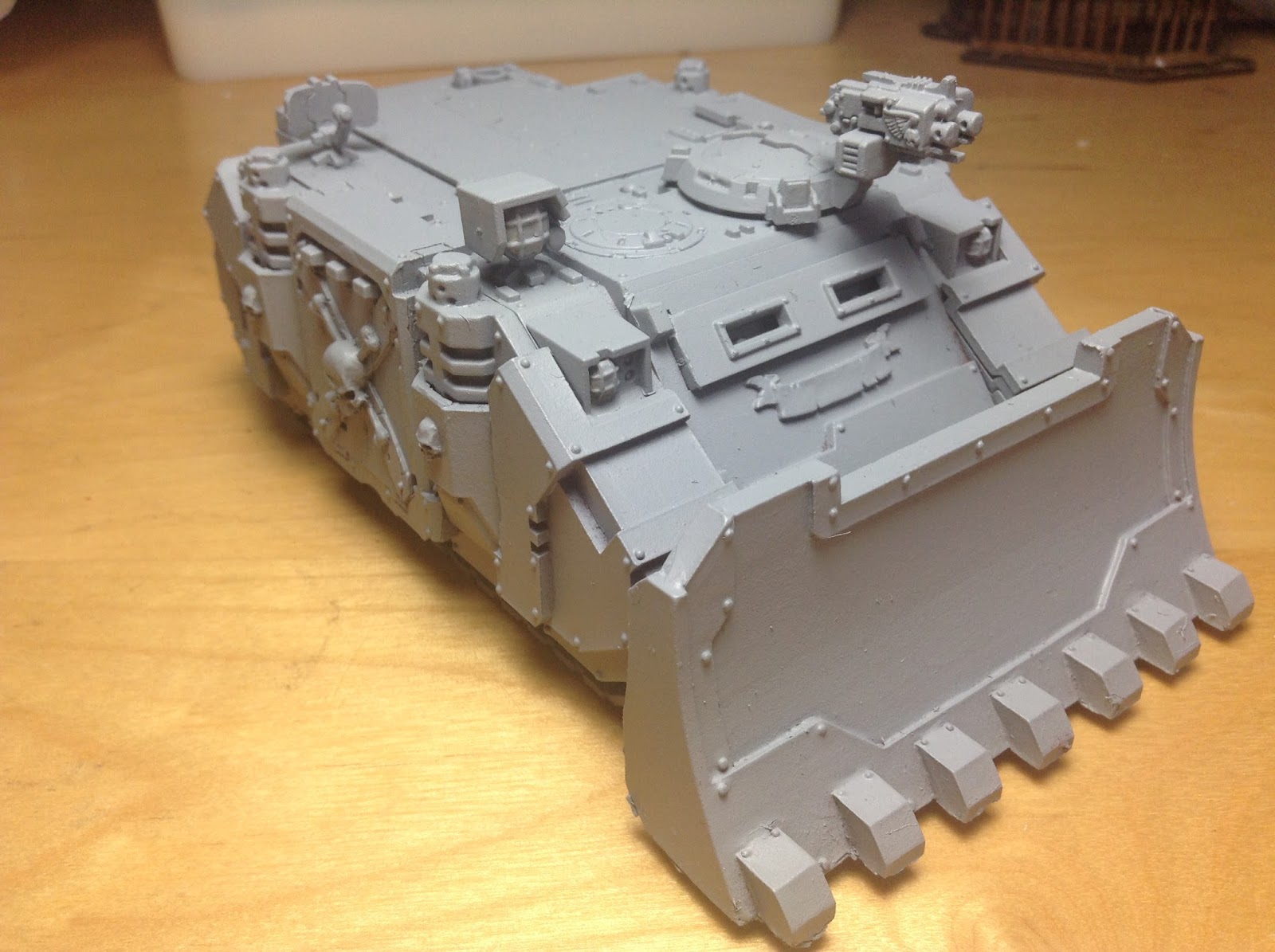 I picked up this Rhino as part of a bulk deal. I'm undecided as yet as to whether to use it for my Dark Angels or my Inquisition. I'm mildly tending towards the Dark Angels at the moment. 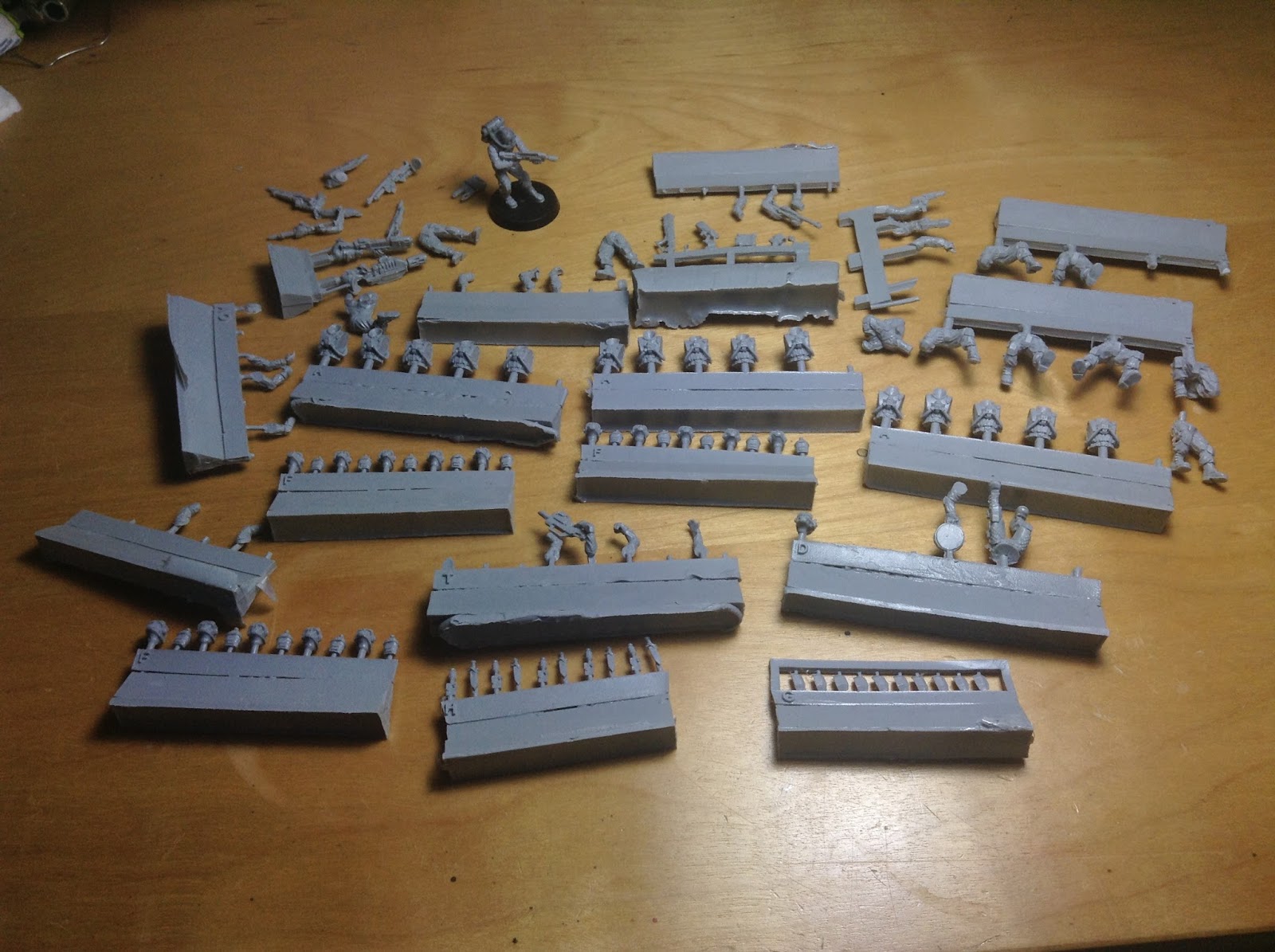 A whole bunch of Elysian bits, and one kitbashed heretic using Elysian and Chaos Renegade parts. 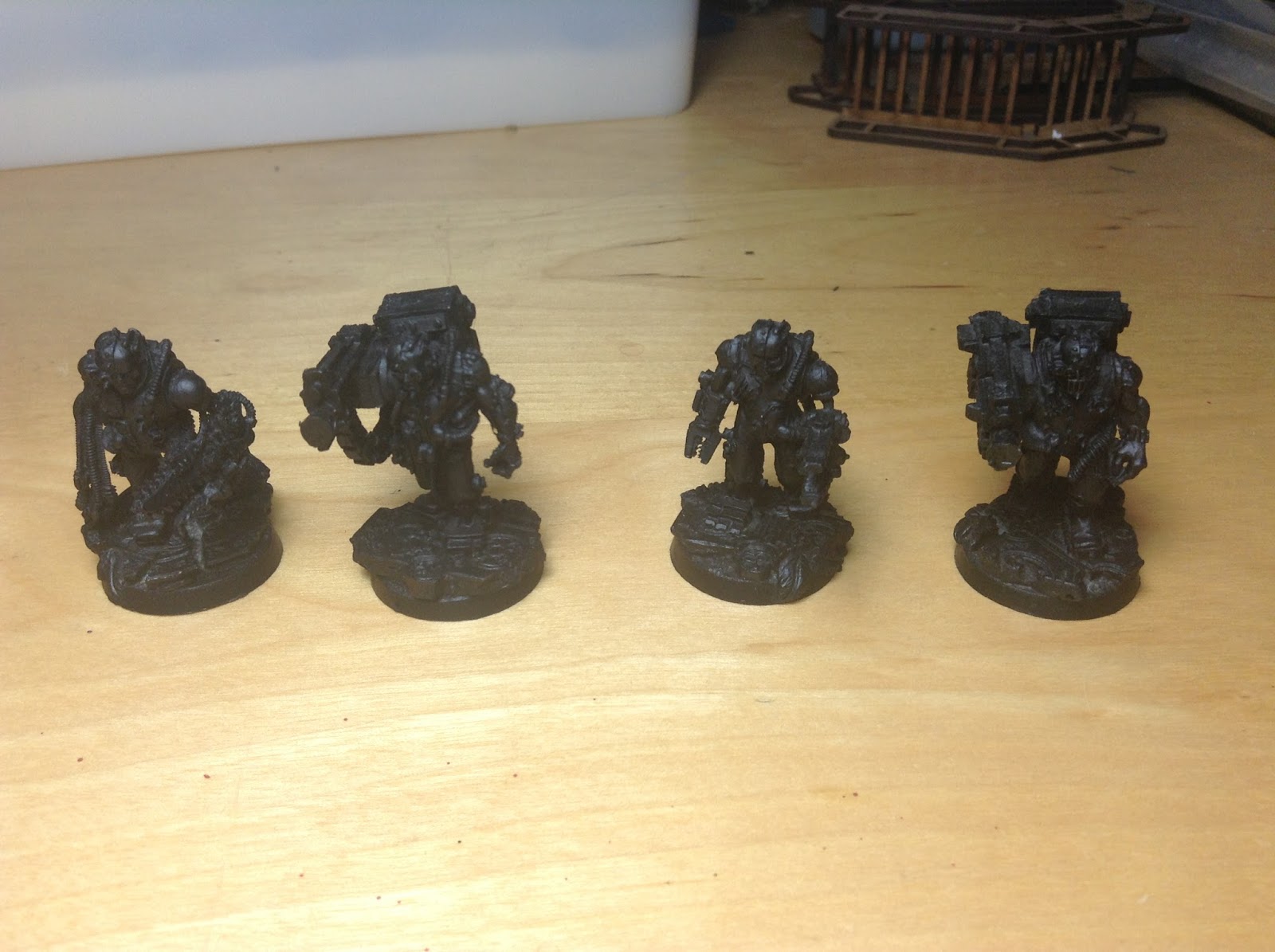 Also in the bulk buy were four Servitors - two with Heavy Bolters, two for the fixing of things. 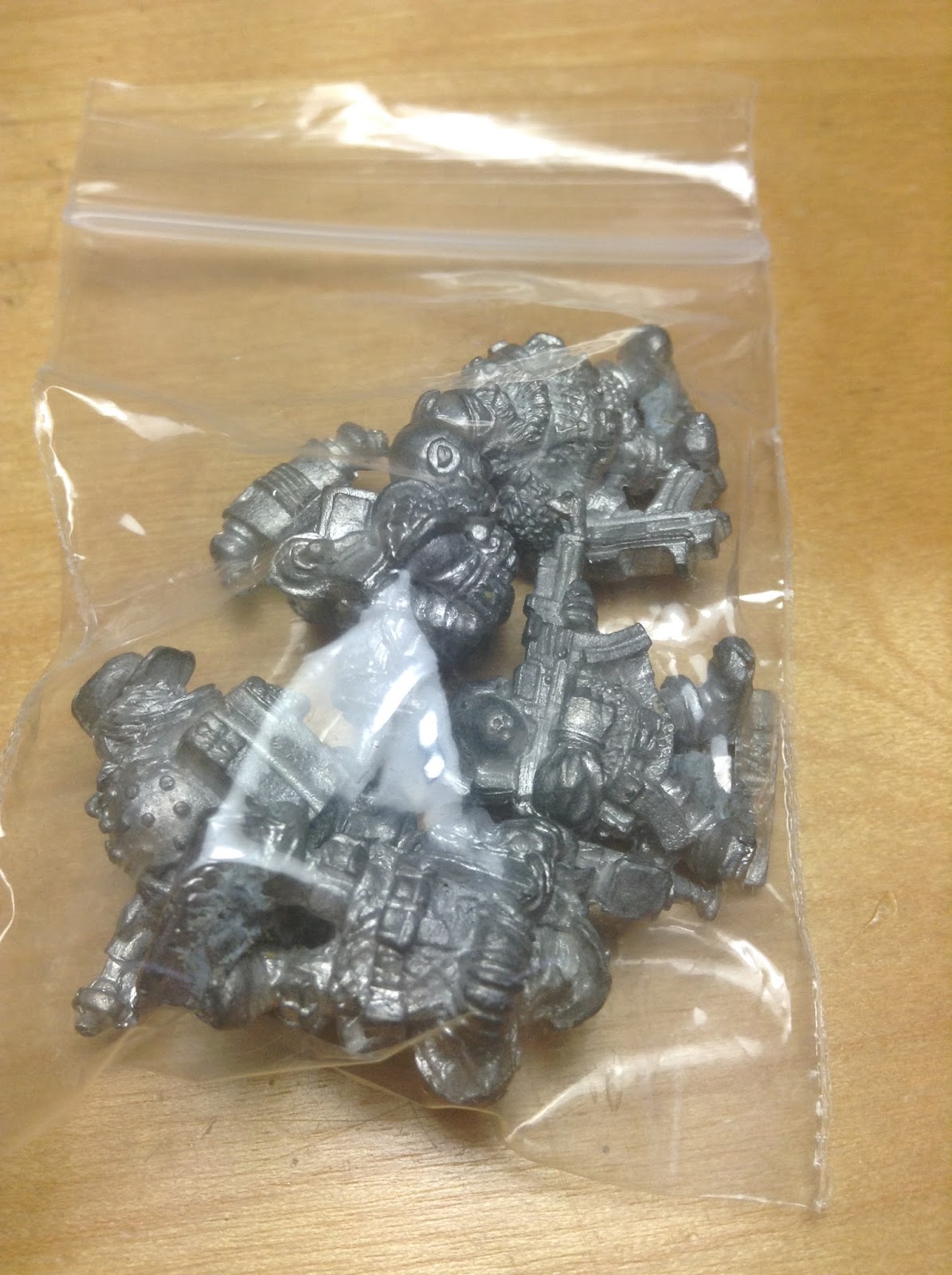 Five metal Squats. These will be going into an Inquisitorial Warband, and make me inordinately happy. 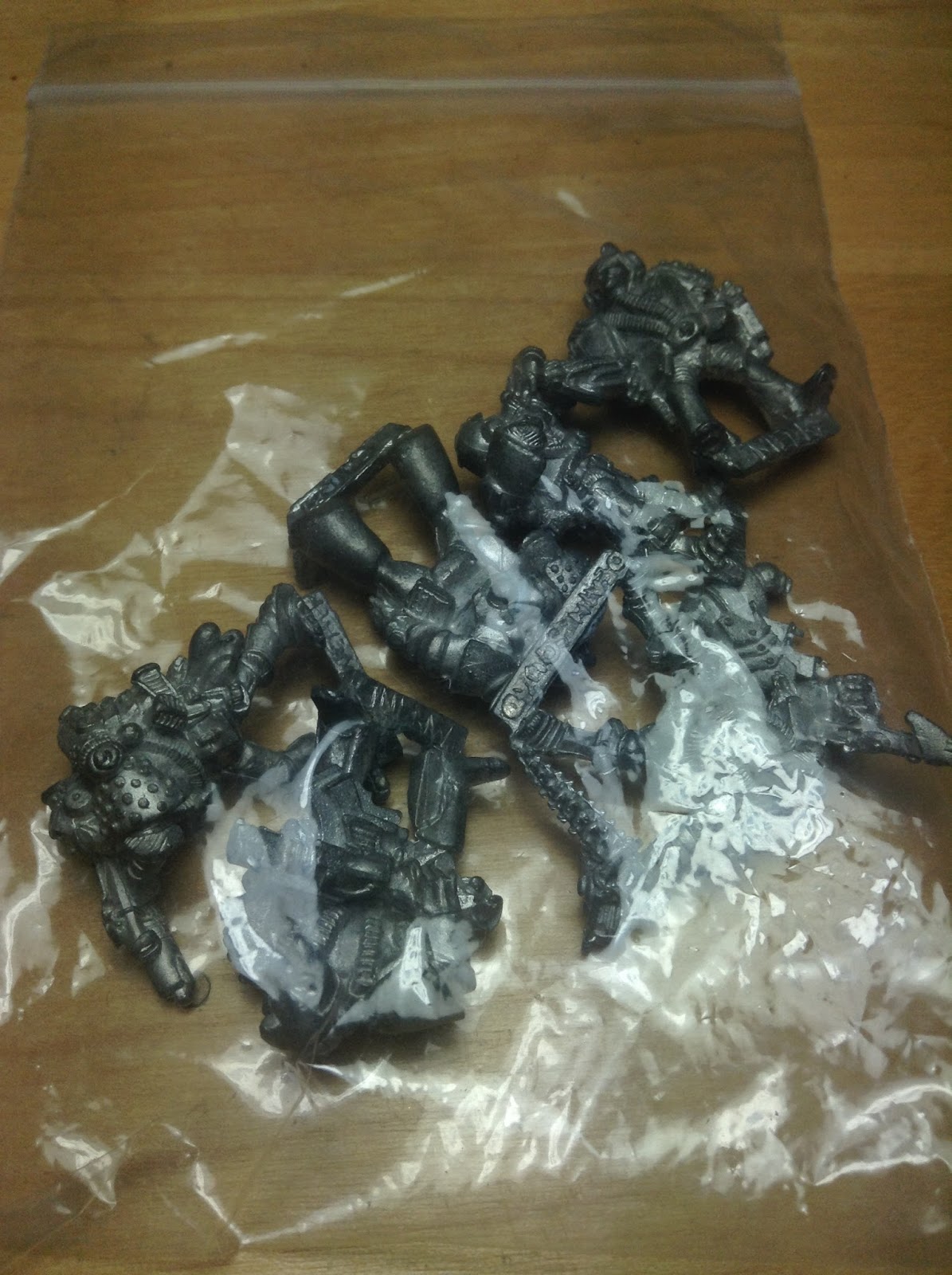 And the final part of my bulk deal - six Rogue Trader era metal Space Marines. I think one has a Heavy Bolter. I was originally planning on using them as Fallen, but plans may change base on my future whims. 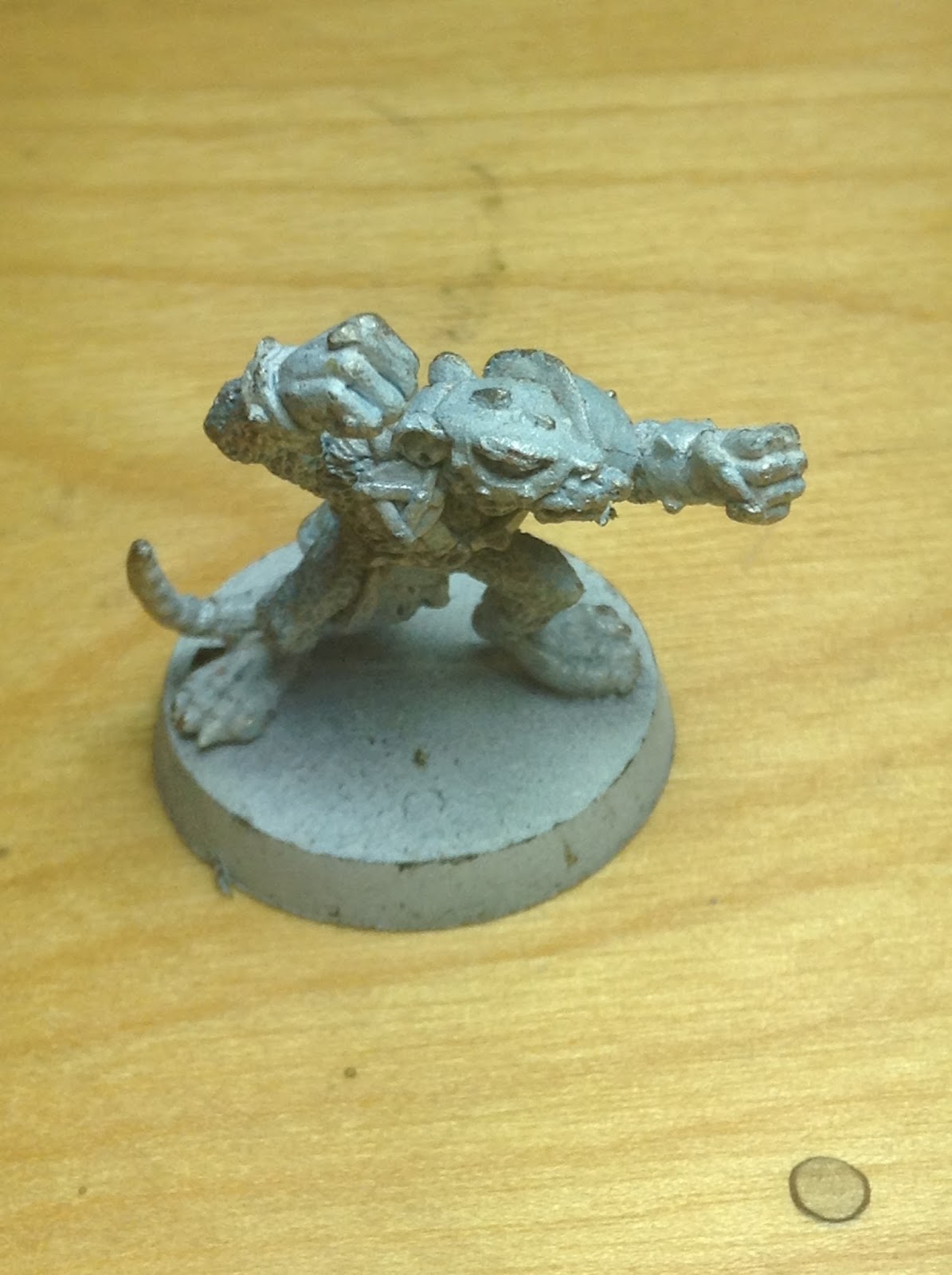 This chap wasn't actually bought at the Bring and Buy, but I found him in with a bunch of other bits and pieces I picked up second hand the previous week at a model railway shop. I do have a Skavenblight Scramblers team sitting around, so I'll add him to them - a spare lineman is never a bad thing! 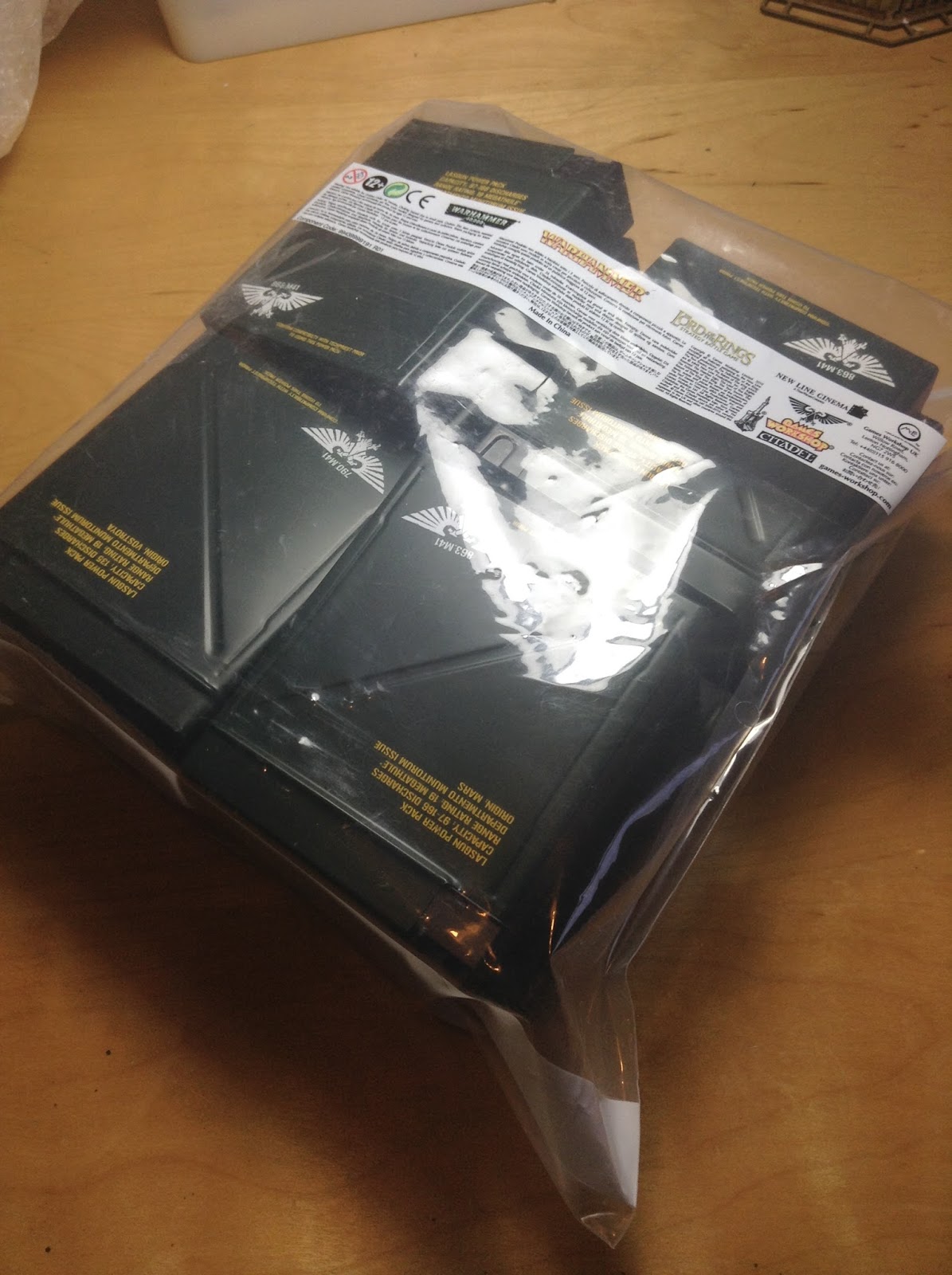 I also spotted a bag of lasgun cartridges which I thought my friends who run a 40K LARP would like for props. They did, the price was right, so they'll be hopefully winging their way up to Scotland shortly. 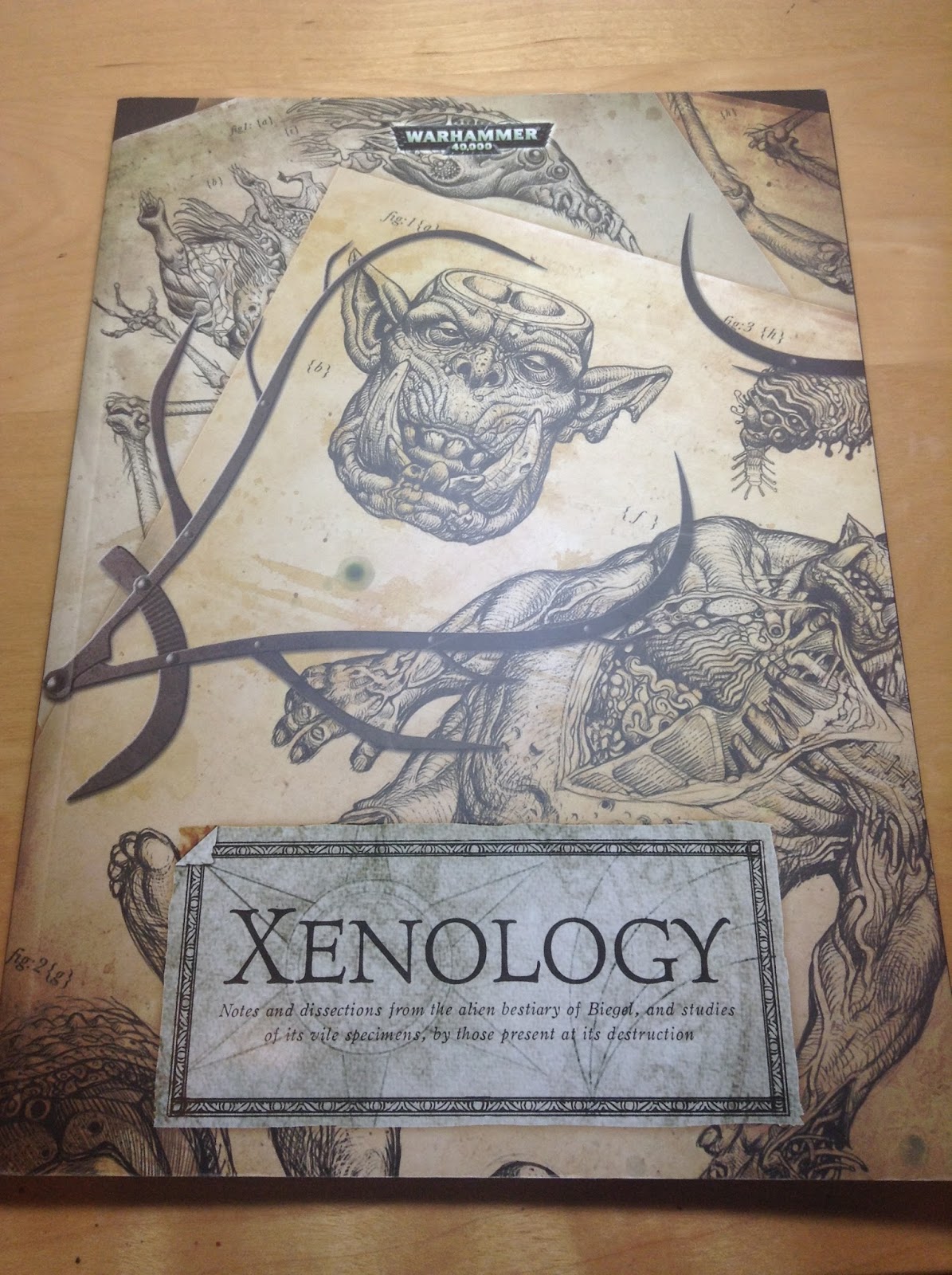 Two Necromunda gangs from the previous week's shopping were swapped for Xenology. It's a nice source book for ideas and stuff, and generally hard to find these days. Sadly, the Inquisitor Sketchbook went before I got to it! 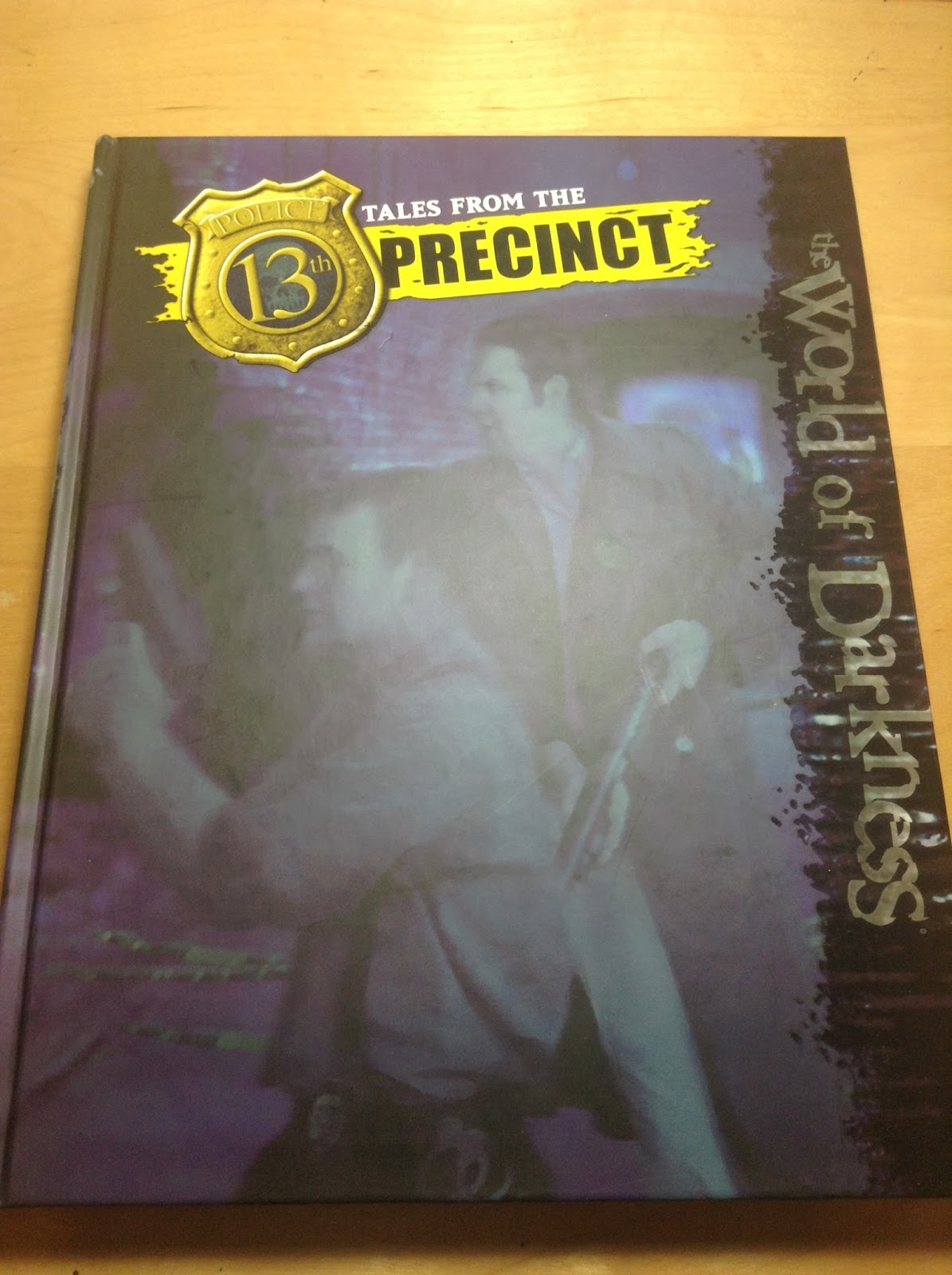 A lovely gentleman gave this to me for free, as its missing from my RPG book collection. It was definitely appreciated. 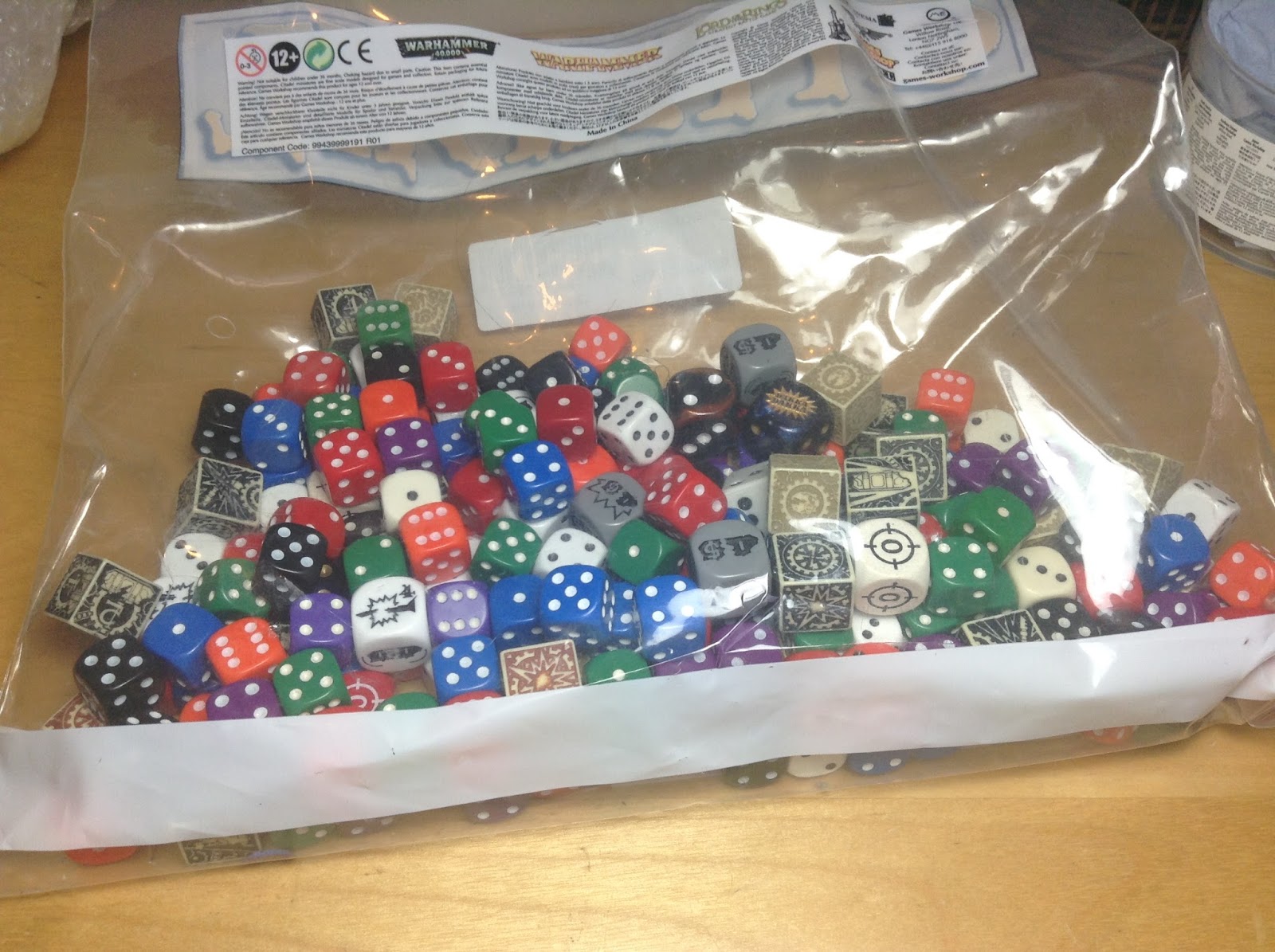 You can never have too many dice, right? 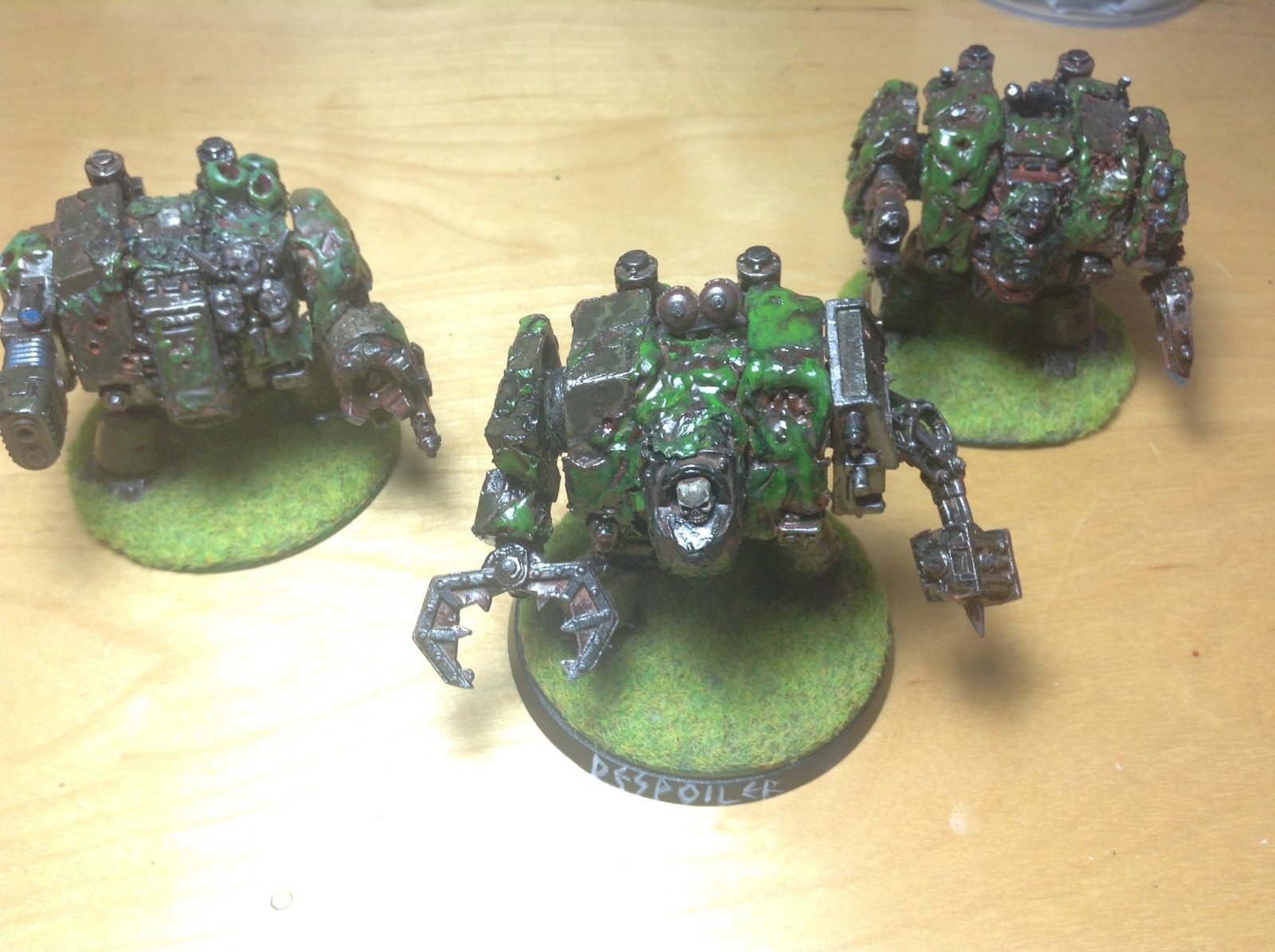 I've also picked up three old metal Chaos Dreadnoughts, which I'm going to run as a Mayhem Pack. I'm not planning on running Nurgle Chaos Space Marines, but I decided that the Iron Warriors I am running would be totally cool with keeping some quarantined horrors in a teleport bay ready to drop onto someone as a way of breaking a siege. 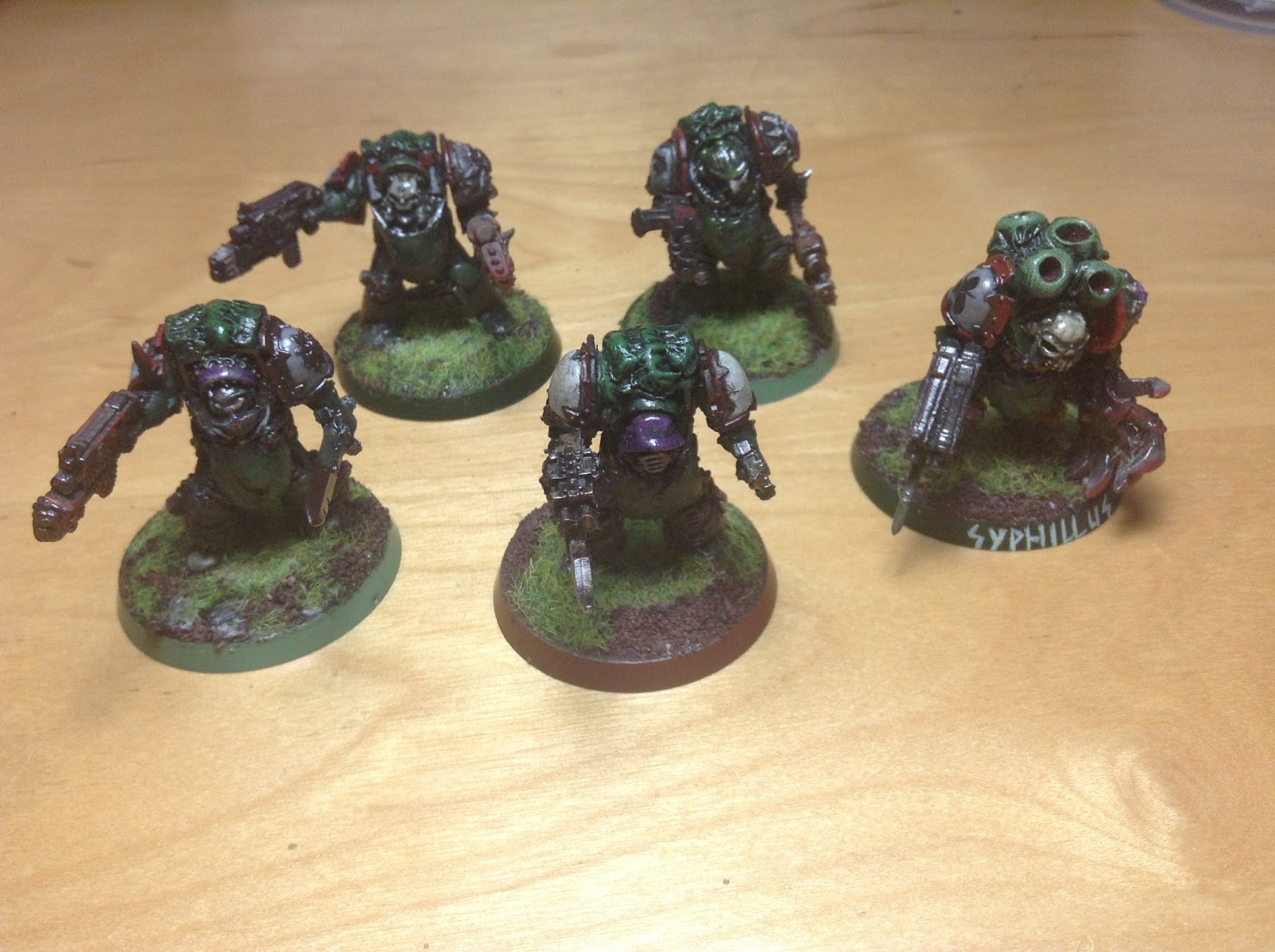 Finally, I spotted that the Terminators next to the Helbrutes were old metal Rogue Trader miniatures, which I am a total sucker for. I have no plans for them, but I'm super pleased to have them.

So, now to ebay to try and offload some of the things I failed to sell this weekend...
Posted by The Responsible One at 18:39 No comments:

A while back, I decided to commission Golem Painting Studio to paint my Forge World Colossus Bombard. It arrived back with me last week.


These photos are the ones Golem sent me prior to sending it back to check I was happy with the paint job - which I am. I know commissioning people isn't to everyone's tastes, but I'm very happy with the results I got.
Posted by The Responsible One at 20:01 5 comments: