The start of a hobby space 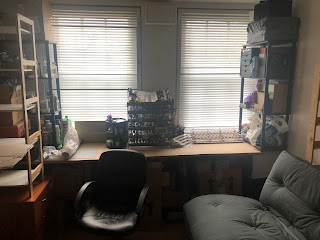 This is a sight I've been working towards for a long while. A hobby desk, ready for use. This was actually taken a weekend ago, as I was off LARPing this weekend, but I'm looking forward to finally being able to get some hobby done and posted on the blog. There's a quiet one planned for this weekend with nothing in it. It's going to be amazing. 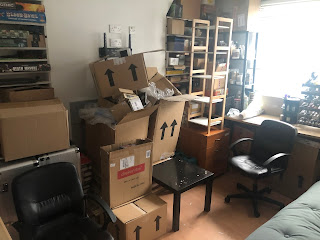 Obviously some of it was the magic of photography angles. This is all the packing material we've kept hold of for now... 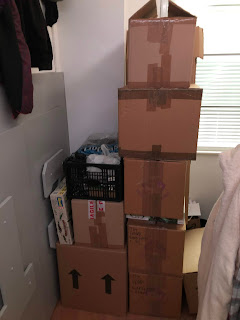 Because we need to work through this eBay pile. Impulse purchases and changes of plans build up over the years and I would recommend taking regular sweeps of the hobby "to do" pile and thinking about if you still want it. This is a literal, as well as metaphorical weight, that I'm going to be getting out of my life. 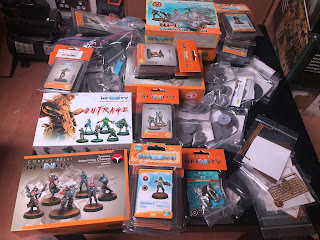 I am still definitely into my Infinity, though. This is all the unassembled stuff that still needs to be done. I'll be getting some off to my assembly guy soon - maybe a job for next weekend...
Posted by The Responsible One at 20:39 4 comments:

Necromunda: A little firefight with the Cawdor 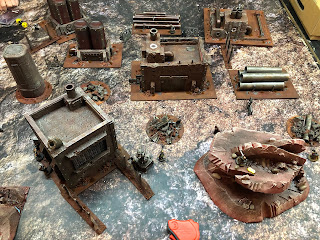 Our Necromunda campaign continued with me receiving a challenge for some new turf from a Cawdor gang. 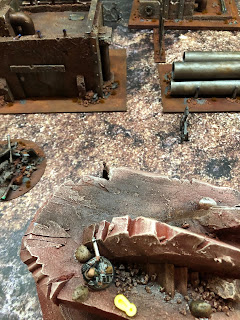 I finally managed to get my Heavy Stubber ganger to shoot! He's not managed to do that yet. 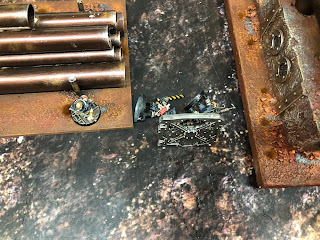 A couple of Cawdor got shot up pretty bad! 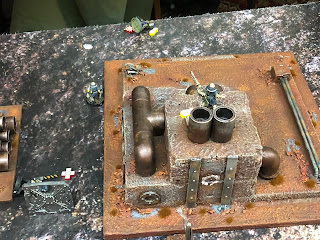 Meanwhile, a Cawdor with a long rifle was taking shots at people. 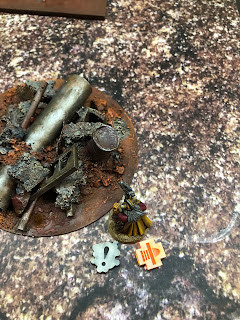 Meanwhile, my Squat bounty hunter managed to miss and run out of ammo on his first shot. 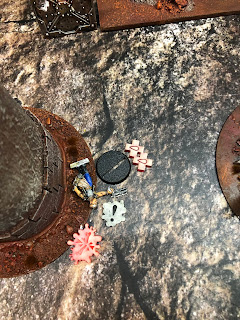 One of my new juves got caught in the cross fire and got properly mangled up! 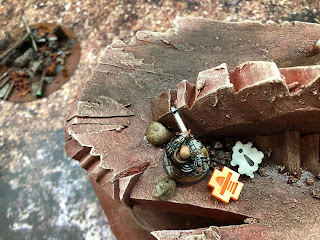 And then my Heavy Stubber managed to miss and run out of ammunition, and I decided it was time for the gang to peg it before it got any worse!

I need to find some time to have a sit down and sort out the gang as we're now going into a downtime period and I need to work out what to get.
Posted by The Responsible One at 19:00 2 comments: 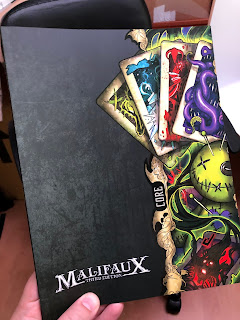 I recently picked up the new book for Malifaux 3rd edition. I really enjoyed playing Malifaux a while back, but it was one of the casualties of the house move. I hear that as the game expanded towards the end of second edition, it got a bit unwieldy and had a few balance issues between newer and older profiles. 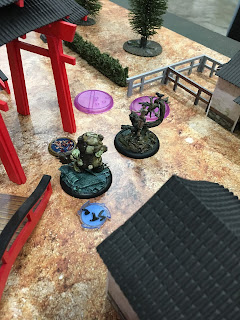 One of the changes in the new edition is that Malifaux has taken their continuity forward, and as a result, taken a number of Masters out of play. One of the affected Masters is Collodi, the living puppet I've been playing so far.

They've also stopped having Mercenary models that can be taken by any faction. I had a reasonable collection of unassembled figures to use those rules, and conveniently, they're mostly Outcasts. 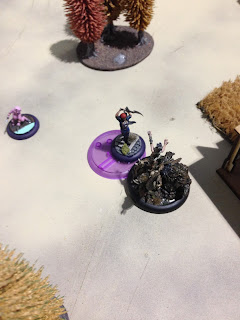 So, I'll be taking a little break from the Neverborn for a little while and starting up an Outcast crew. It seems likely I'm going to start with either the Viktorias or the Parker Barrows gang. I'll need to assemble and paint them, so they'll likely be one of the earlier things I paint once we've got the work bench available again.

I'm not abandoning the Neverborn forever. I really like the look of the new Dreamer crew, and I still really rather like both Zoraida and Lucius. I can also put together a weird little puppet crew using either the Widow Weaver or Hinamatsu, so I'll definitely return to puppets one day! 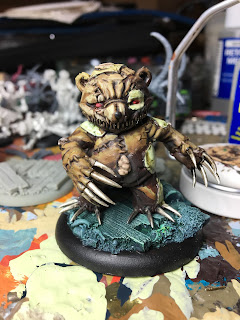 If you're interested in the new Malifaux, I think the best discussion of the new game / rules that I've heard have been by the Schemes and Stones podcast. They've done two podcasts, depending on whether you're:


I'll hopefully update my project page later on to talk more about what I'm planning with Malifaux.

Posted by The Responsible One at 19:00 2 comments: 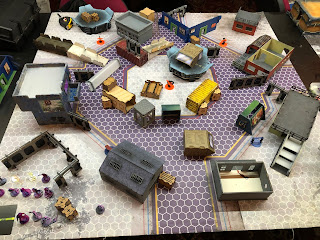 Having not played Infinity in a while, it was time for another round of the Infinity League where I'm playing my Druze. Up this round was the mission "Transmission Matrix", where you need to try and control more antennae than your opponents. This is thrown a twist by all the antennae also being Repeaters for both sides. This means that Hackers on both sides can affect and be affected by other models for most of the board.

The Druze are OK at the Hacking game. However, not remembering how good the Steel Phalanx's hackers are, and assuming they'd be pretty good, I decided a better approach would be to go without any Hackers and make do with other specialists.

Having been forced to deploy first, I gritted my teeth and chose to go second as well, because capturing antennae back seemed less scary than trying to hold them from the assault specialists that Steel Phalanx represent. 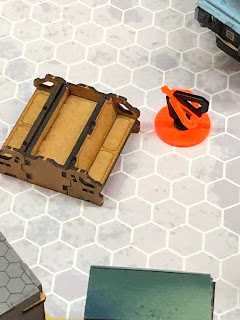 You can't see him, but Saito Togan is hiding behind the bench next to the central console here. 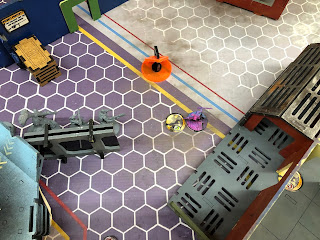 I managed to snipe out Penthesilea as she advanced with a fortunate long ranged ARO. The rest of my opponent's orders were spent bunching up around the antennae to hold the two near his deployment zone. Then I, like a monster, ran on a Bashi Bazouk with E/Maulers (E/M mines that can isolate enemy units meaning they can't receive much in the way of orders).

Outside of the photos, I moved a camo token over to the middle antennae and shuffled a couple of figures up to stand my my antennae to score the round. 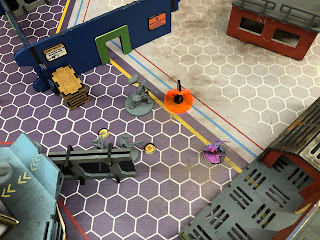 My opponent first wisely tried to get Phoenix to obliterate the drop troop and the mines with an incendiary round, but was unlucky as my Hunzakut camo sniper revealed and took him down with a lucky hit, while his shot towards the mines went wide.

That left him little choice but to dodge with the link team. Ajax was safe but two of them ended up isolated, stuck only able to use their own orders in their turn. The Bashi was righteously gunned down in retaliation, but that was about it. 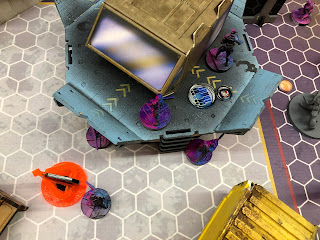 For my turn two, I ran my link team across the field. First the HMG drew a careful bead on Ajax and obliterated him. Even in a not great range, five dice and link bonuses do a lot! Then, I moved up my Data Tracker Druze to take out the "Designated Target" civilian who was hiding behind the shuttle.

I was now 7-0 up and my opponent was very short on orders. They mostly bunkered down to try and avoid losing any more troops. 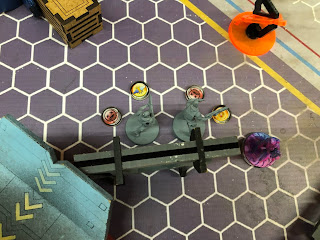 I moved a Hunzakut around the corner to the two isolated Myrmidions and blasted them with a shotgun. With them unconscious, it was relatively easy to walk a Druze over to stand in base to base contact with one for my Classified Objective, giving me a clean 10-0 sweep of the board.

Both I and my opponent were a bit out of practice at Infinity, but in this case it seems that the game was swung more or less by my remembering a bit more of the tactics and rules than my poor opponent, who never really had a chance to get off the starting blocks.

Still, I'm taking it easy at the moment with Infinity. I'll be finishing up the league with my Druze then looking to get some games in with Dahshat, and hopefully looking to get something else painted up once the hobby room is ready.
Posted by The Responsible One at 19:00 No comments: 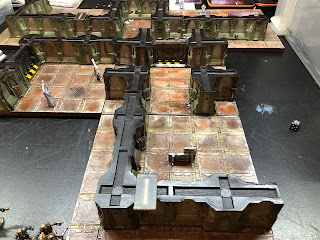 A while back, I got another game in at HATE in the Necromunda campaign. This was against one of the other Orlock gangs in the same campaign, but a slightly more experienced players. 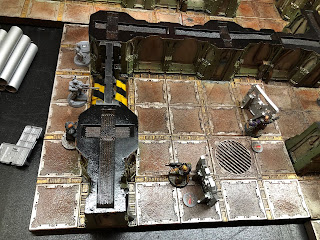 They used one of their territories to infiltrate a bunch of their fighters, which was super good. 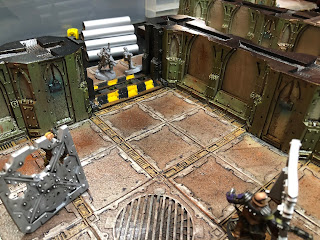 They all came out behind a door and opened fire on the gang. 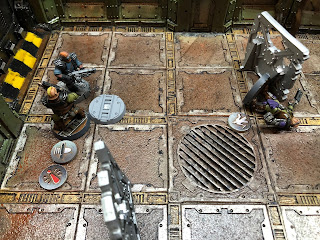 My champion who'd run out of ammunition decided to charge in and try and punch them to death... 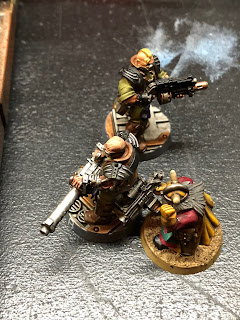 But then the gang bottled and all this lot ran away, the cowards.

This seems to be part of the swingy nature of a Necromunda campaign. Sometimes someone will get lucky or unlucky and suddenly a gang will bottle out early and lose a campaign. This swingy luck on the individual games is less of a bother when you've got a longer campaign because it will average out over time, but I could see it being super annoying during a one off game.

Still, I'm having fun, even when I'm getting flanked, shot up and running away!
Posted by The Responsible One at 21:59 2 comments: