A little bit of weekend painting 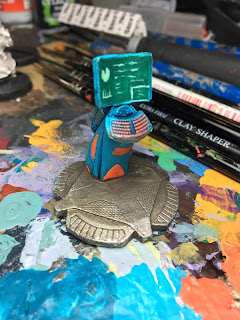 I got a little painting done this weekend. I wanted to see if Army Painter spray undercoat worked on Reaper Bones material, to which the answer is "it seems to be OK". The terrain isn't for much in particular - will probably see service as a piece of scatter terrain for Infinity.

I went with a bright colour scheme on the terminal because I'm trying to get out of the habit of painting everything in dull colours. It's a useful practice exercise for when I want to use it in anger. 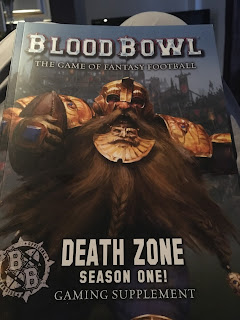 A late Christmas present finally wound its way to me. I had a good sit down read and got reminded why I love Blood Bowl so much. I should really consider digging out my Skaven team... 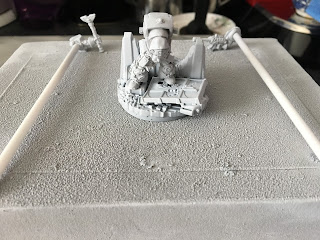 I also got the Daemonhunter undercoated. He can now potter off into the "waiting for 40K to catch my interest again" pile. 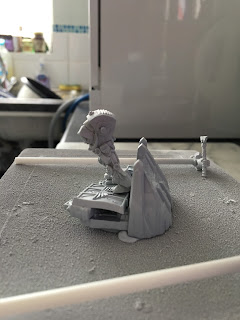 This was a common problem with some old sculpts - he has quite a strong forward lean, and that can look a bit odd if you're not careful with assembly.
Posted by The Responsible One at 19:26 No comments:

Email ThisBlogThis!Share to TwitterShare to FacebookShare to Pinterest
Labels: Blood Bowl, Bones, Inquisition, Painting, This week, to do 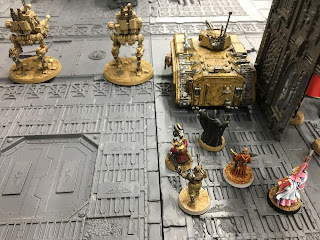 When I started this hobby back in the early 90s, I was far more into to the Fantasy side than the Sci-fi one. My first wargaming book was Warhammer Armies for 3rd edition, and my first full rules set was 4th edition Fantasy. 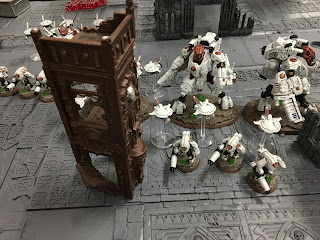 I got into 40K much later - picking up some Tallarn when they first came out, as I was still pretty obsessed with Frank Herbert's Dune at the time. But I was a few years older then, so while my fantasy interest ambled between Skaven and Empire, and eventually both armies were sold off, my Guard ended up staying in boxes at my parents house. 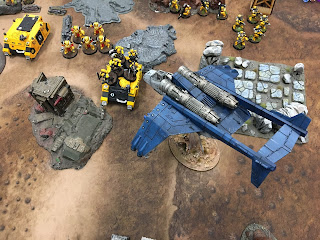 This meant that when I got back into the hobby because my darling wife was a painter, and we were looking for a joint hobby to do together, it was my Guard that first got caught up. This blog was first started back in 2012 in the aftermath of a Throne of Skulls tournament where my wife and I had rushed to get a 1500 point Guard army painted after I'd not quite remembered how little was actually painted... 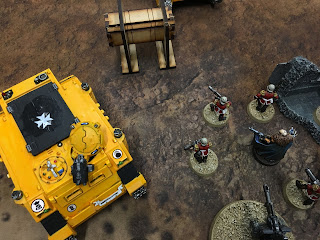 But now? I'm not really interested in playing 40K. I'd been telling myself for a while that it was just that I wanted to play "narrative" games, but was that really true? On reflection, it's not that. People refer to the rules set having gotten "bloated", but that's really not it. Army power levels are massively uneven, and shovelling most of your models off before you've got a chance to do anything with them is no fun at all. 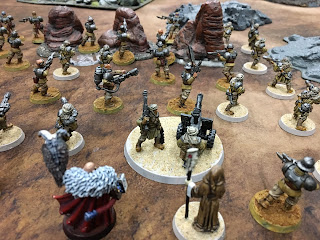 So, my Guard are getting packed away into boxes for a bit. I'm not rage quitting or sulking. I've made a rational decision that I can get more fun for less effort with other games for now. Rumour mill indicates a new edition of 40K later this year, and I rather hope it is a pretty massive overhaul on an Age of Sigmar scale to bring things back into a more balanced, fun experience. 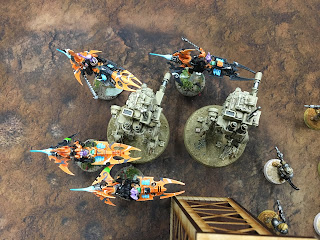 In the meantime, I've got plenty to be pottering along with. I've got 1,000 points of Age of Sigmar Chaos to get finished up so I can give that rules set a go. I'm assembling a couple of figures to act as test beds for my planned Infinity colour scheme. I'm even getting a bunch of the Made to Order Inquisition figures all assembled and undercoated for when the enthusiasm returns. 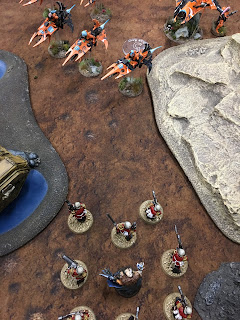 You may also still see some 40K hobby, because I've got a few of those boxed game malarkies that need assembling and painting, and the intent has always been to assemble them to play the games they came with, not just as a cheap way of getting troops for my army. But for that to start, some other part done projects need finishing first.

Really, even with 40K on the back burner, it's hard to know where to start!
Posted by The Responsible One at 19:00 15 comments: 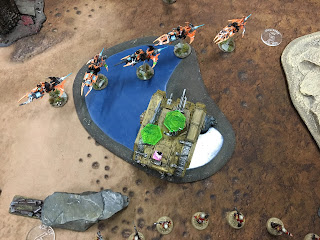 On Sunday, I pottered down to Dark Sphere with my darling wife to take part in a casual 40K tournament. The idea was pretty simple - three games of 40K at 1,750 points, with an emphasis on the casual side of things.

The ticket price was £6, which is basically what Dark Sphere charges for 3 table hires for 40K. There weren't any prizes, but we got a couple of thank yous for taking part - some Sisters of Silence art cards, and a pot of paint each.

This was a new thing for Dark Sphere, and they were openly soliciting feedback at the end. I'll certainly be sending them a few thoughts. From my point of view, it was mostly little niggles, and the event was broadly enjoyable and fun. 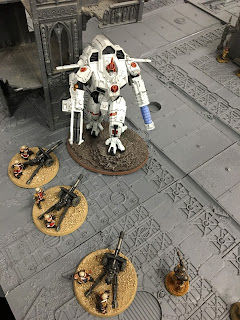 I was running a "Castellans of the Imperium" detachment from Gathering Storm I. This let me take a mash of Imperial units from lots of different places - Inquisition, Guard and Militarum Tempestus all together.

First up, I came up against a Tau list, beautifully painted with lots and lots of big stompy robots. I was a bit nervous about the firepower it could put out, and this was soon proved right by my big Guard infantry platoon getting wiped out, along with Coteaz, before I could take a turn. 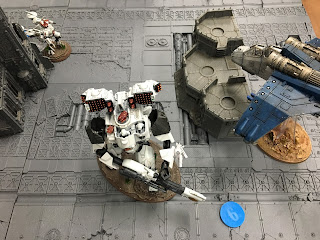 After that, it was mostly just mopping up. There was nowhere I could bring on units without something shooting them to death - even those dropping out of line of sight of any units were blown apart by interceptor units with indirect fire weapons.

In the end, the victory points stood at 18-2 in the Tau's favour. I'd maybe caused two wounds to one of their units, and almost everything was dead. It was just a case of removing models. My opponent was friendly and fun to play against, but it didn't really feel like a game as such. 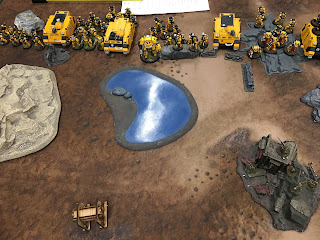 Next up, I found myself facing a beautifully painted Imperial Fist army. My opponent was just getting back into 40K after some years away, and was painting up an Imperial Fist force suitable for use in 40K or 30K.

We were playing the Emperor's Will mission, with both of us having a single objective, and we speculated on a few different narratives that could have caused the fight - was it a Heresy era battle putting down rogue psykers, a conflict in the aftermath of the Heresy when Dorn objected to the Tactica Imperialis, or maybe it was the Inquisition trying to suppress some secrets when some warp storm delayed Fists emerged in the 41st millennium? 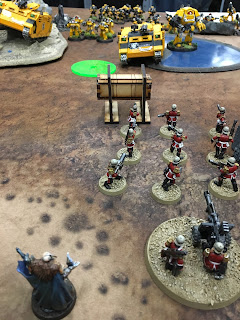 This was a much closer game, with good back and forth in casualties. The Guard took some hits, but in turn took out a lot of tanks and wiped some key squads of Marines off the board. The Storm Trooper squads did some excellent work trying to capture the Marine objective, but weren't quite able to make it, leaving us both with our own objectives and Line Breaker, but the Marines having gained First Blood for the win. 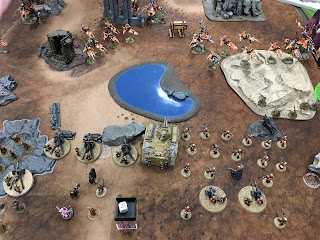 We were doing the Maelstrom of War mission where you have to hold objective points to get instructions that actually score points. 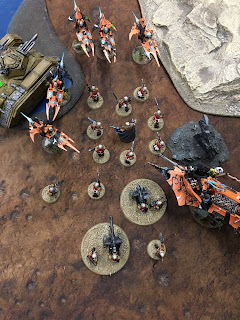 Sadly, I was unlucky on the cards - I ended up with four cards to capture two each of the objectives held by the Dark Eldar, and failed my reserve rolls twice for my Storm Troopers so they never dropped in.

I did manage to get some things to line up properly, though - I used psychic powers to grant one of the platoons rerolls to hit and Ignore Cover before ordering them to open fire with "First Rank Fire" from an officer - the resulting firestorm took out most of a Reaver Jetbike squad, and an exploding Venom took out the survivor. 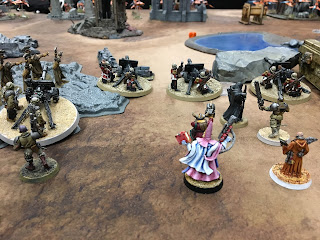 So, I ended the event with some complicated feelings - my lists aren't doing well in the current meta at the moment, even at a casual game. I enjoyed the games, but I think if there'd been more than one close fought battle, then I'd certainly have enjoyed them more.

I don't play 40K enough to work out the entire problem. Is it just me not playing enough? Is it that my army selection isn't competive with all the new releases and I need to change up my units? Are the Guard simply not a reliable choice with the current Codex? Is it the terrain choices made on the tournament boards not granting enough cover?

I'm going to ponder this question a bit longer, and work out if the effort I'm putting into this is worth the enjoyment I'm getting out, or if there's things I can put the same effort into and get more enjoyment from.
Posted by The Responsible One at 21:38 2 comments: 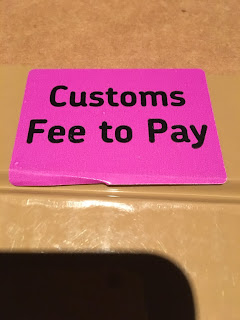 So, a couple of weeks ago, I got the one thing that wargamers dread more than the Royal Mail Red Card of Frustration. The Royal Mail Grey Card Of Gouging You £8 As A "Handling Fee" For Customs Charges. So, I gritted my teeth, paid up, and waited. 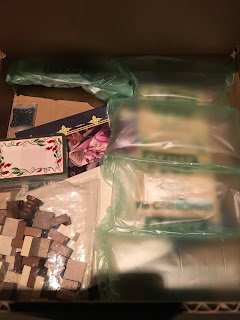 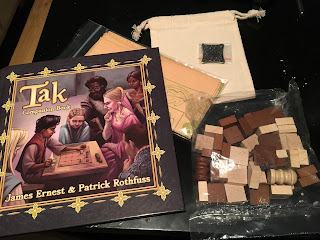 No, it is in fact "Tak", a board game that Patrick Rothfuss made up in his Kingkiller Chronicles series of books. An enterprising gentleman then came up with Actual Rules and then there was a Kickstarter. 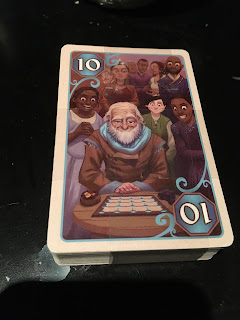 I also threw in a few quid for another card game called Pairs, because why not? Quick games we can play while travelling are always a good investment. 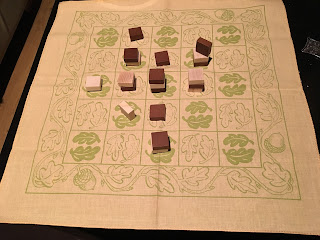 I went for a travellers set, because I'm going to a LARP called Empire now, and this will fit in wonderfully. The cloth mat was an extra, and if you look closely, you'll see a coin to the right of the picture that can be used as an imaginary "centre square" on a table if you're lacking a board.

This was wonderfully timed, because it meant I could take it to a small player social event that was happening this last weekend. This post was written a while ago and set on a timer, because I am probably sleeping right about now.
Posted by The Responsible One at 18:00 2 comments: