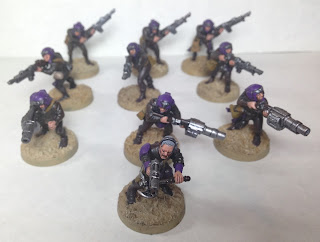 The redeployment of a squad of veterans from the 3rd Pakeshi Regiment to the Tallarn XVI has been approved, following Inquisitorial review. 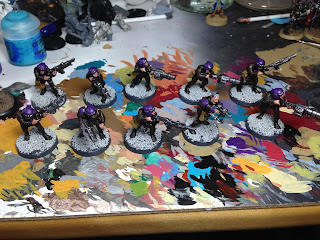 However, because Steve is a gentleman and a scholar, he included a squad he'd been using as Inquisitorial Henchmen that he'd made up out of spare parts. I quickly decided I was going to tinker with them a little to make them suit as an Imperial Guard squad. 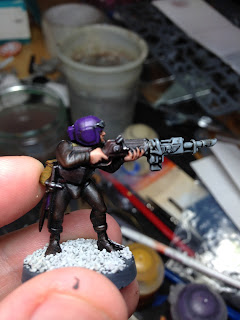 Four of them had been converted to use Grenade Launcher parts, which were intended to be "counts as" Storm Bolters. I was happy to use them as Grenade Launchers in a Veteran Squad, which meant I could only use three - so one got swapped out for a lasgun, using the same conversion technique Steve had originally used.

I also used some Vallejo Coarse Pumice and Sandy Paste to rebase the models, as I wanted them to match my existing Guardsmen, now based on a hot desert planet rather than the city rubble of Pakeshi. 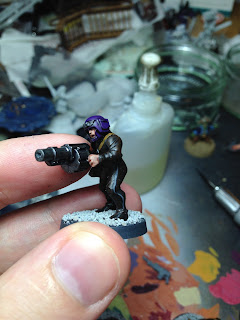 There were also a few mould lines which were were vexing, me, so they quickly got seen to with a sharp scalpel blade. They were then re-undercoated using Imperial Primer and painted back up to match the original scheme. 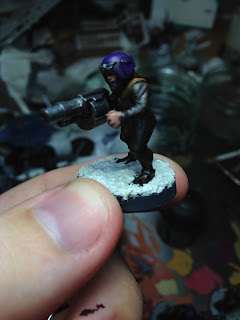 As you can see from the top of the page, the squad is now at full strength and ready to be deployed to smite the enemies of the Emperor! 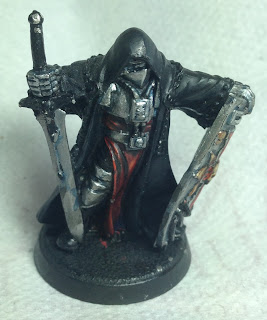 Next up is an Inquisitorial Crusader. He was picked up from Bits and Kits, who are now doing "pre-loved' models. The motley crew he came with had paint jobs beyond saving, so into the Fairy Power Spray they went. But this chap had quite a nice bit of work on his shield, so I decided it was worth trying to save him rather than throw what had been done so far away...
Posted by The Responsible One at 19:57 2 comments:

Email ThisBlogThis!Share to TwitterShare to FacebookShare to Pinterest
Labels: Imperial Guard, Inquisition, Overlords, Painting, This week, to do 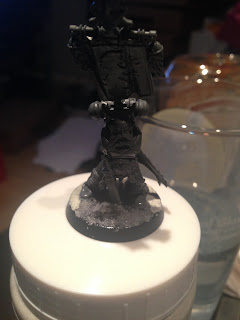 "Hey, Responsible One, that photo is pretty terrible, even by your standards! What's going on with that?"

"Well, noble reader, it turns out that while assembling the Stormclaw set, I varied too far from the instructions and made a stupid rookie mistake. Also, I was being slack on taking my photos and just using overhead light, but given that emphasises the problem, I'm going to pretend that's a deliberate choice rather than laziness." 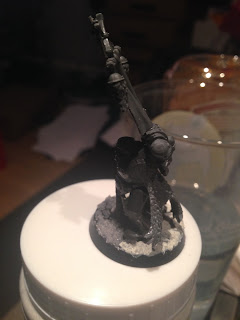 So, here's the photo that shows what the problem is. By choosing to give the guy a wolf cloak, I've forced him to lean forwards. By giving him the back banner as well, this then shades his banner and his face to most natural light.

This does lead to some thoughts...

Firstly, back banners are actually an absolute pain in the what's-name to lug around. Just ask a LARPer or cos-player. While they can be useful as devotionals and look kind of cool on small miniatures, I'm not sure if they have much historic precedent because I'm reasonably sure in the real world, they're just too much of a pain to move around with!

Secondly, if you are putting one on a model, you need to make sure the miniature is standing up pretty straight, otherwise it will cut out most of your overhead light and obscure the areas you want to put detail into.
Posted by The Responsible One at 23:05 2 comments:

A little slip in self control (new miniatures)

Obviously, as a wargamer, I never have a problem with irresponsible purchasing sprees when I should be trying to paint more than I'm buying, right? No, wait. It's that other thing.

So, it turns out Bits and Kits have a new pre-owned section, with pretty reasonable prices. They had some Inquisitorial Retinue models. Had. Now I have them. The Crusader has a pretty solid paint job and just needs some light rescue. The cherub sadly needs stripping. The other three only came undercoated anyway. 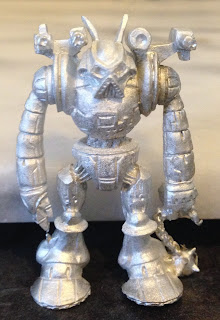 A guy on a Facebook group I'm in had sculpted up a cool looking robot figure. I decided to get one. My wife thinks it's ugly and hideous. I think he's amazing. Should be a nice and simple paint job, too. 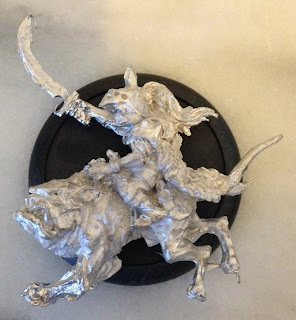 I know, I know, I haven't painted my existing Arcworlde stuff. Why on earth am I buying more of it? 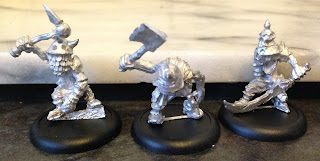 Well, it turns out when someone asked on the Facebook group about when the hobgoblins from the Kickstarter were coming out, and the answer was "those ones are limited edition, they'll be redone in the next supplement", I had to own them immediately.

This weekend is now planned to be a busy weekend of painting and assembly - some new stuff, some existing, but I'm pretty stoked about getting some stuff done!
Posted by The Responsible One at 21:13 6 comments: 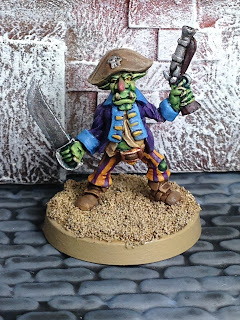 The Goblin Aid Pirate Goblin is finally done. He was sculpted by Stuart Powley of Slap Miniatures (some minis on the site not safe for work). I'd been putting off the stripes on the trousers for ages, but I finally got on and did it. The first pass at the stripes left them too similar to the jacket colour, so I washed the jacket with b lue and the stripes with sepia to bring them away from each other, before highlighting up the stripes by hand as best I could to make them match the folds of cloth in the trousers.

A comment I made on the leadpile has meant I win a prize! His blog is definitely worth checking out - there's all sorts of different awesome bits of hobby there.

Oh dear. One miniature done. Which is at least a project. I had tried to rush another job through yesterday, but it was too late in the month and I was getting tired and risking stuffing things up, so I called it a night.

Still, it's not like I've bought much, right? Execution Force, the event only Forge World models, the Space Marine Command Tanks, some Mars Attacks scenery and a pile of miniatures from the Dark Sphere sale.

It seems like the problem I've been facing is doing jobs I feel I should be doing rather than ones I want to do at that moment in time. If I want to regain momentum and start loving the forlorn half finished projects, I need to blitz through some quick wins of enjoyable simple stuff that's new and interesting. New and interesting from the existing backlog, that is - not some new purchases!
Posted by The Responsible One at 19:08 2 comments:

Email ThisBlogThis!Share to TwitterShare to FacebookShare to Pinterest
Labels: Goblin Aid, other blogs, This week, to do
Newer Posts Older Posts Home
Subscribe to: Posts (Atom)