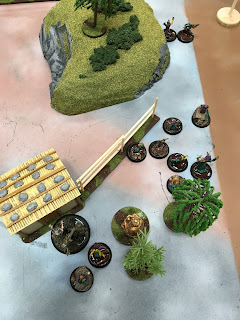 Remember I went to a Malifaux tournament back in May? I barely do! But it seems like I haven't written up the third game I played there due to being completely slack, and this needs remedying forthwith!


I was up against Ironsides, and we were meant to Stake a Claim. We were in a Corner Deployment and the options for schemes were Claim Jump, Eliminate the Leadership, Leave Your Mark, Covert Breakthrough and A Quick Murder.

While I'd never played Ironsides before, I realised that a punching match was going to go badly, so I went with Covert Breakthrough and Claim Jump. The plan was to rocket a few puppets at one corner, work out which way Toni's Patented Ball Of Death (TM) was going, and run away in the other direction as fast as possible. 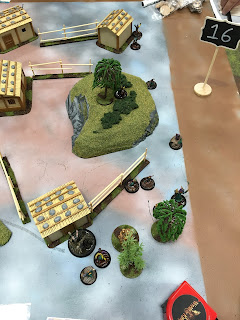 The beginning slingshot worked excellently, with teeny puppets shooting across the board like creepy little wooden missiles. 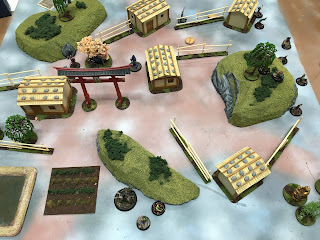 Meanwhile, the Emissary snuck around the bottom half of the board, hoping to score a few quick points. 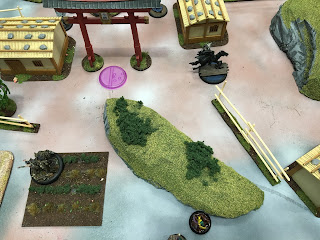 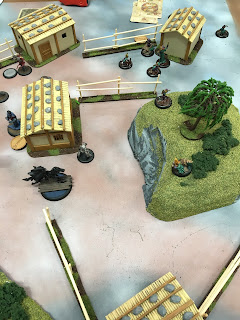 Metal Gamin were summoned, while I deployed an ablative Changeling and Marionette. If my opponent wasn't careful, the plan was to sneak the Changeling up and "borrow" the Mech Rider's attack to hit it back for more damage than they were expecting 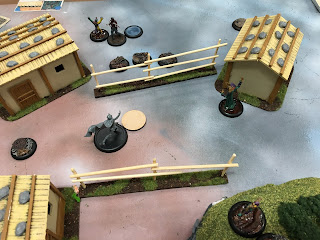 In the middle of the board, Toni and the Mages turned all the puppets into so much scrap. I desperately tried to tie them up long enough that I could have some Claim Markers down to keep scoring. 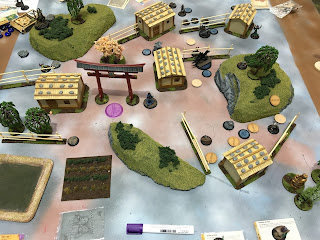 In the end, while it was close, I couldn't quite get enough markers down with the brutal kicking I was receiving and the number of models I'd lost. Still, a 7-8 loss was pretty respectable and close, and I'd been pulling a lot of tricks to score points.

The Showdown events are amazing events, and if you are a Malifaux player, you should absolutely go. The next one, Summer Showdown, will be inferior to the Spring one for the sole reason that it clashes with a LARP and I won't be able to be there. Other than that, expect three awesome games of Malifaux with lovely people. It's on 30 July, and you can get tickets here.
Posted by The Responsible One at 19:00 No comments: 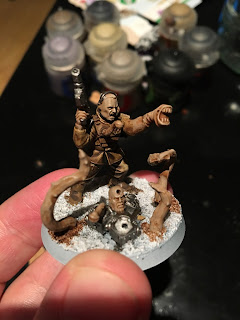 Well, life has been a little busier than expected, but I managed to get a bit of progress on the Secret Santa model. My latest discovery is that working with a limited palette can lead to models looking rather odd - in this case, I'm going to need to add a little colour to the flesh and mutations to make them pop and stand out.

Still, it's more than I painted last month, and I'm still going!

Posted by The Responsible One at 19:00 2 comments:

Getting back into regular painting 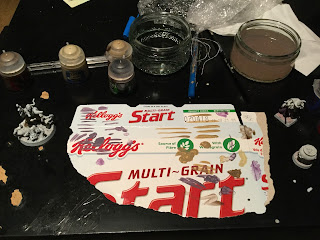 So, last weekend a friend of mine was visiting, and she'd mentioned that she painted and just "did some not very good stuff with washes", so I offered an informal painting lesson. Now, I'm also a pillock and forgot to actually check pictures of her painted stuff, because it was definitely at least as good as mine! That's something to remember for next time... 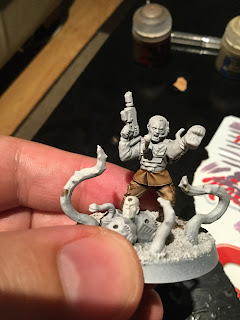 I dug out my old secret santa model from a few years back to use as my example and show what I was talking about - as I'm terrible at explaining. 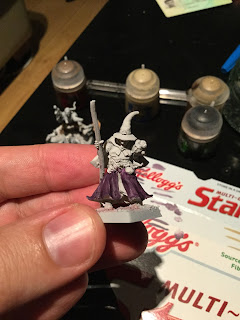 Meanwhile, my guest painted a bit of this excellent Heresy Miniatures witch.

I've now got a little mini paint station set up on the coffee table, and I'll try and get a little done every night I'm home - starting with finishing off these two figures that are now started.
Posted by The Responsible One at 22:02 No comments: 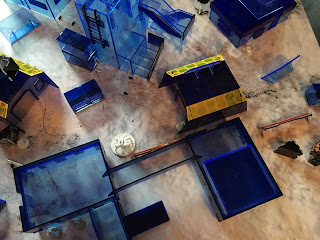 So, HATE club decided it was about time to get a bit of an Infinity League together, and I thought this was a good idea to get me playing a bit more regularly to practice. I signed up with the Bakunin Sectorial so I'd get to learn link teams and all that stuff.

First up, I drew against a Tohaa player, and after a short discussion we decided to pick Frontline from the list of available missions - something simple and easy to start off with. 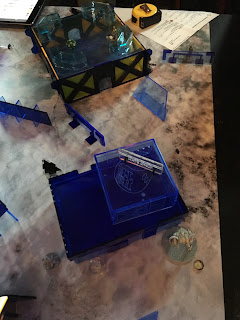 I started off by running my Lizard up the right flank and dropping it into Suppression Fire. 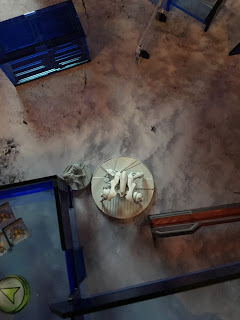 In return, my opponent ran a Tohaa Triad up and took out my Lunokhod - but I had the Test Run Classified Objective, so managed to score a quick point repairing it. Sadly, my opponent had taken up most of his orders shooting my TAG to bits, past the point of all repair... 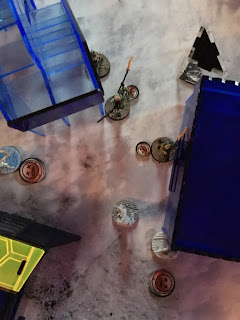 A brutal firefight developed between the Triad and my models on the right hand flank, around my High Value Target. Unfortunately, he had a doctor sitting right behind the model I took out, so he just got right back up again... 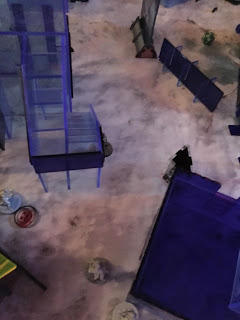 Before my Prowler managed to take him out permanently. 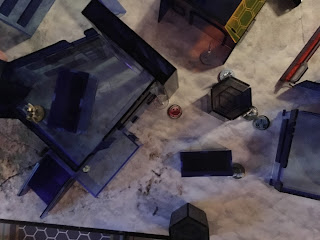 Meanwhile, my link team was getting plinked away at on my left hand flank... 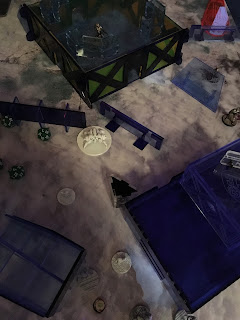 The Lunokhod ran up field to take out an annoyingly placed sniper. 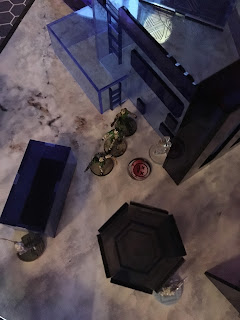 Another Triad came up my left flank to try and secure more scoring zones... 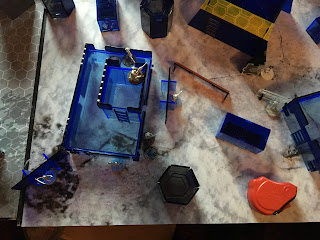 And ended up clinching the Tohaa the win, as with the loss of the TAG I simply didn't have the points left to score - ending up losing 1-9.

Posted by The Responsible One at 20:15 2 comments: 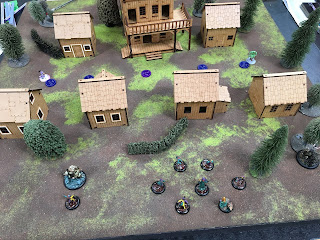 Another battle report from Spring Showdown at the start of May. I'm trying to work through a big backlog of material for everyone!


Next up is game 2, it's Squatter's Rights, and I've drawn against a Resurrectionist Reva crew. Schemes are Claim Jump, Frame For Murder, Dig Their Grave, Hidden Trap and  Mark For Death. I take Frame for Murder on Teddy and Dig Their Grave. 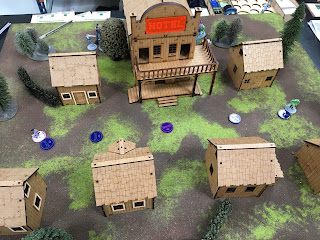 My opponent uses Assorted Shenanigans to get a corpse candle and crooligan up the field early. I know Reva has a trick to attack through corpse markers, so I need to be quick. 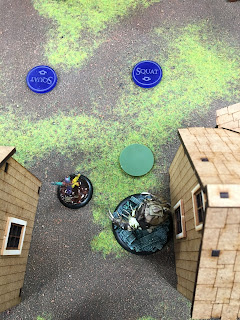 The corpse markers are popping up all over the field, and I decide Teddy can take some risks and just run over them. 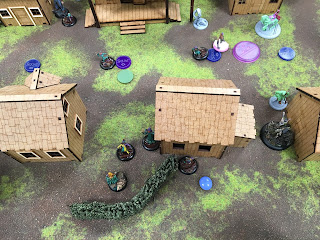 Meanwhile, Annoying Traitor Witch-Hunter is holding up my Mysterious Emmissary, which has at least dropped a Hungry Land marker right up in the Squat markers my opponent seems to be going for. 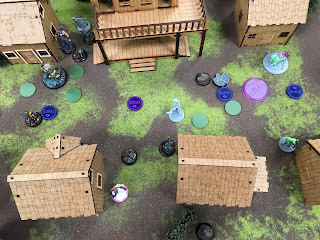 I manage to drop a couple of scheme markers to score for Dig Your Grave but don't always manage to capitalise on them. Meanwhile, the Emmissary is taken down quickly and I curse not putting Frame on that rather than Teddy. Meanwhile, Teddy is trying to murder everything to death to attract as much fire as possible. 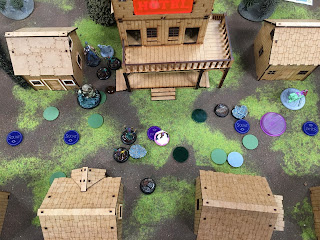 Everything is dying, except for Teddy. Around about this point, bottom of turn 3, I've got a Black Joker in hand, Teddy has one wound left, and Reva uses her last action to attack Teddy through corpse markers. I'm all ready to cheat in the Black Joker in defence to take a hit and go down but Reva fails to get a necessary suit to succeed at all, leaving Teddy to survive the entire game... 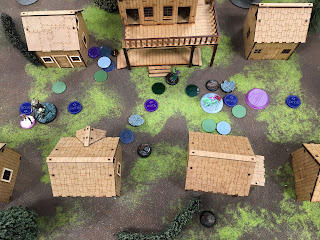 And thus the game ends, with me losing 4-9. I'd not managed to keep my Squatter markers turned in my favour for enough turns, and only scored lightly on Dig Your Graves (I don't remember the exact breakdown, it was either 3/1 Strat/Scheme or 2/2). The loss of all the Frame for Murder points just made it worse!

So, with a draw and a loss to my name, it was on to the final round!
Posted by The Responsible One at 19:00 2 comments: