Last Sunday was scheduled to be Apocalypse at Darksphere.

So, having checked the event times, planned and scheduled, I got up at an early hour, having been ranted at by my wife about setting alarms at ungodly hours, and headed into central London.

I arrived to find myself the first non staff member there, with a good terrain set up already done and ready for gamers.

I was sure I took a photo of that! It's not there any more. I am clearly made of fail.

Anyway, to cut a long story short, no-one else turned up. Several people had booked in, but they just didn't show on the day. I was very confused, but Alexi (who is awesome) challenged me to as big a game as I could manage and scrounged up models to face me in a nice 5th edition game. 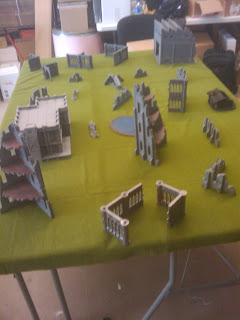 I don't have any shots of the battle itself, because I was too busy playing, but here's one of the shots I took of the terrain set up at the start. This is a quick shot showing most of the board viewing down its length - the only bit missing being a few extra ruins to the right in the corner, out of shot.

We rolled up an Annihilation mission, with Dawn of War deployment, and Alexi chose to go first, choosing the side with more ruins, but without the big central building. 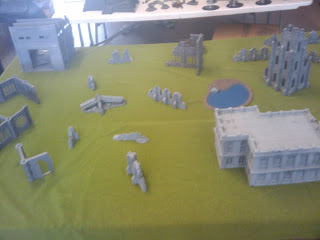 I won't "turn by turn" this, as it was a pretty big battle. I'm also not going to cover my full list beyond saying it was based on my Throne of Skulls list, with the addition of a Leman Russ Battle Tank, some Ratlings, Storm Troopers and a Primaris Psyker, and dropped the Penal Legion for space. The veterans were moved into the Valkyrie, and the Platoon Command Squad took the Chimera.

The battle was pretty brutal. We both came away with some learning experiences and had an interesting chat after the battle. The final result was 11 kill points apiece.

As a note, I let Alexi start using my dice after he suffered an appalling run of bad luck for the first two turns. The luck then seemed to average out after that. I did make a couple of silly mistakes as I got a bit cocky, but he didn't give up and really fought me back.

My learning points:
- Deep Striking Melta should concentrate on the tanks, even if you think you're doing well on that front
- Buildings are giant vehicles, and can effectively give you the benefits of mechanisation. This gives them the potential to be quite unbalancing
- Mid to late game, when you've dealt with most of the opponent's armour, don't under-estimate their infantry firepower
- Torrented pinning is a horrid thing
- I'm still lacking the ability to reliable get a large number or heavily armoured group of infantry out of cover

Alexi's learning points
- He hasn't done many missions in 5e (mostly Apocalypse) so realising that kill points don't care about unit points values was a bit of a system shock for 3 man Ratling squads
- His plan was a ton of pinning checks via snipers then massed firepower. My incredibly infantry light army put paid to this and resulted in him having a lot of troops sitting about waiting for a target

Joint learning points
- 5e has a major issue with random results on vehicles - I was just rolling a lot of sixes despite putting comparative or even slightly less anti tank fire into his vehicles, leaving the board very mismatched in the early turns!

I would also note that if we had rolled anything but Annihilation, I would have been smushed as I did not have the Troops choices to do anything in the face of his anti infantry firepower!
Posted by The Responsible One at 19:00 No comments:

Round up of last week

So, last week I was trying to get a bunch of painting done!

I set myself the goal of;

This is still a pretty awesome achievement, and I was very happy to get them all done. I hope to get some pictures up of them by the end of the week, and hopefully a bit more forgiving than the ones of Broga from the Masterclass!
Posted by The Responsible One at 22:27 No comments:

Email ThisBlogThis!Share to TwitterShare to FacebookShare to Pinterest
Labels: Dark Sphere, Imperial Guard, Painting, This week, to do

I hate my wife's camera

So, I was super, super proud of the miniature I painted at the Golem Studios / McVey masterclass.

Then my wife took photos of it and sent them to me.

Her camera's super-macro settings show up absolutely every flaw and problem with my painting possible.

I thought it was a pretty good job, all told: 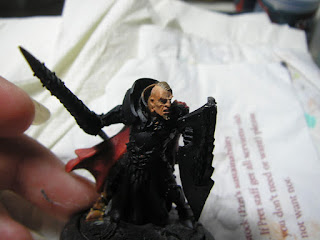 We had three things to do: non metallic metal on the foot, painting the face, and blending on the cloak. I was most proud of the face, followed by the NMM on the foot, and finally the cloak, which I felt wasn't quite finished.

Lets have a look and see what her camera brought out, shall we? 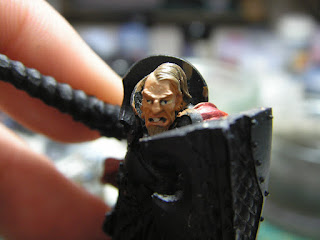 The eyes are just not painted in the right place. I obviously need to practice a lot, lot more before I get this sort of thing right. I'm not sure if I want to try and correct this or leave it as a point for comparison. The miniature is awesome, though, and I really should complete it. 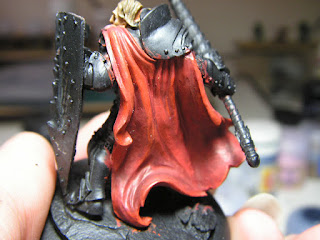 As I suspected, my blending is not as smooth as it could be. I need more practice here, but I was thinking that it wasn't fully done yet when that part of the workshop finished. 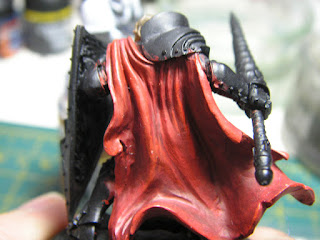 Despite that, the cloak isn't making me as depressed as the eyes. That really got to me! 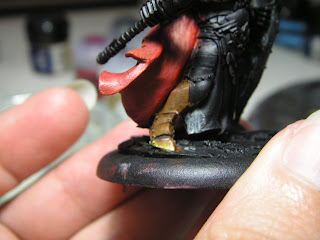 I'm quite happy with the foot. It is just the bottom panel I've fully NMMed, and the blending on it is really nice. I'm not sure about my final white spot highlights, but its something to practice over time.

So that was a disappointed exercise in showing off something I thought was awesome until my wife's camera got near it and gave me a reality check.

Does anyone have a camera that makes things look better?
Posted by The Responsible One at 22:09 No comments:

My wife is running a series of "Paint along" things for Darksphere. The first one is a simple speed painting tutorial for beginners.

You can find the forum it's being discussed on here.

Posted by The Responsible One at 20:26 No comments:

A copy has been ordered.

Who does not play.

I will not get this copy until I have completed a certain amount of tidying around the house, which I have committed to.

This may have been foolish, but those of you interested in my comments on 6th Edition are going to have to wait on me clearing out my study!
Posted by The Responsible One at 14:36 No comments:

I managed to work out how to change the time zone on my blog. Admittedly, I'd only just noticed I was posting as if I was in the Pacific Northwest...
Posted by The Responsible One at 23:17 No comments:

So, I'm trying to keep progress steady on painting for Darksphere's Apocalypse Event.

I spent most of Saturday at a friend's house - I cleaned up her Tyrannofex and assembled most of a Herald of Tzeentch on disk. For those who whinge about Finecast - two small bubbles on the disk's eyes, and a small void on the Tzeentch symbol on the staff that is easily fixable with some liquid green stuff. Still to have a single casting that tells me what any of this Finecast having problems fuss is about.

I also got a little painting done, but the majority of that was done on the Sunday, where I seriously got stuck in to my Storm Troopers. They now mostly need faces, gas masks and a few details and touch ups doing before washing. I'm really pleased with progress.

I think I'm on target to get done in time for Sunday. Having done some adding up, it'll be somewhere around the 2,500 points mark, which is more than I expected. Depending on my success I may end up over that, but nowhere near 3,000...

I have a number of half written posts I need to finish off and post up, and need to find the time to get the photos of my masterclass work in progress shots!

So, remaining to do:

Stretch goal:
- Leman Russ Tank
- 5 Ratlings I found lying around that are practically done
Posted by The Responsible One at 23:12 2 comments:

Email ThisBlogThis!Share to TwitterShare to FacebookShare to Pinterest
Labels: Dark Sphere, events, Finecast, Imperial Guard, Painting, This week, to do

I've not posted recently for a variety of reasons.

My other hobby, LARPing, had a big event on that I went to, and the fall out from that has been very time consuming.

I also went to the Golem Painting Studios Masterclass, with Tommie Soule, Mike McVey & Ali McVey. I'll be doing a much longer post about that in the future, along with pictures of what I managed to achieve.

I regard myself as a pretty average painter, and I'm really impressed with myself as to how far I've come on.

There are few upcoming things I'm going to.

Darksphere are running a painting and assembly day at their store on Sunday 17 July. They also have an Apocalypse game on 24 July, which I'm hoping to have about 2,000 points of Imperial Guard at.

Roughly enough, my painting goals for Apocalypse on the 24th is to try and finish the 10 Storm Troopers and the 10 Conscripts / Penal Legion.

My stretch goal is to get another Leman Russ painted up. I'm unconvinced I'll achieve that, but we'll see.
Posted by The Responsible One at 20:20 No comments:

Email ThisBlogThis!Share to TwitterShare to FacebookShare to Pinterest
Labels: Dark Sphere, events, Imperial Guard, other sites, Painting, This week, to do

The Design Studio Open Day write up has now been updated:

"* Meet the team that designed Warhammer 40,000, from Artists to Sculptors, they will all be there to answer your questions and show off their talents.

* Join in Warhammer 40,000 seminars where you can find out the thoughts behind the design choices of the game and the miniatures.

* See fantastic displays of the contents of Warhammer 40,000 rulebooks past and present."

Other things of interest:

"* Red vs Blue - a vicious contest between Crimson Fists and Chaos Space Marines!

* Dogfighting - a participation game using an immense number of flyers, take on the Miniatures Designers and the Games Developers in the skies!

* Psyker Duels - fight out bloody battles against the Games Developers using only your mind!"

That has a few implications as to what might be coming in the new edition.

Also, interestingly, the "Warhammer 40,000 Cataclysm" event set for the next day is still using the standard Force Organisation Charts...
Posted by The Responsible One at 12:39 No comments: