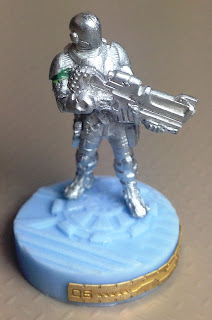 Here's a better picture of the Prowler with Spitfire. I really need to not rush taking photos for the blog! 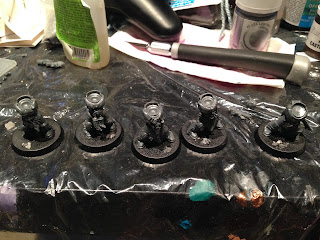 Over the bank holiday weekend, I did some work on the Grey Hunters from the Storm Claw boxed set. 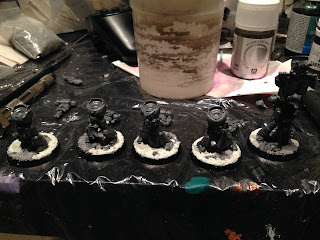 I really didn't get very far at all! I was originally going to make this post a bit of a moan about not getting things done, but with the benefit of hindsight, I was properly wiped out at the start of last weekend and really needed the break. The fact I got a little progress is a happy bonus.
Posted by The Responsible One at 11:12 2 comments:

Email ThisBlogThis!Share to TwitterShare to FacebookShare to Pinterest
Labels: Infinity, Nomads, Space Wolves, This week, to do

Battle Report: Being Picked On By Dark Eldar

So, a while ago, I got a battle in against a friend of mine playing the new Dark Eldar Codex. I was biblically slack about getting it written up, but here it is, finally! 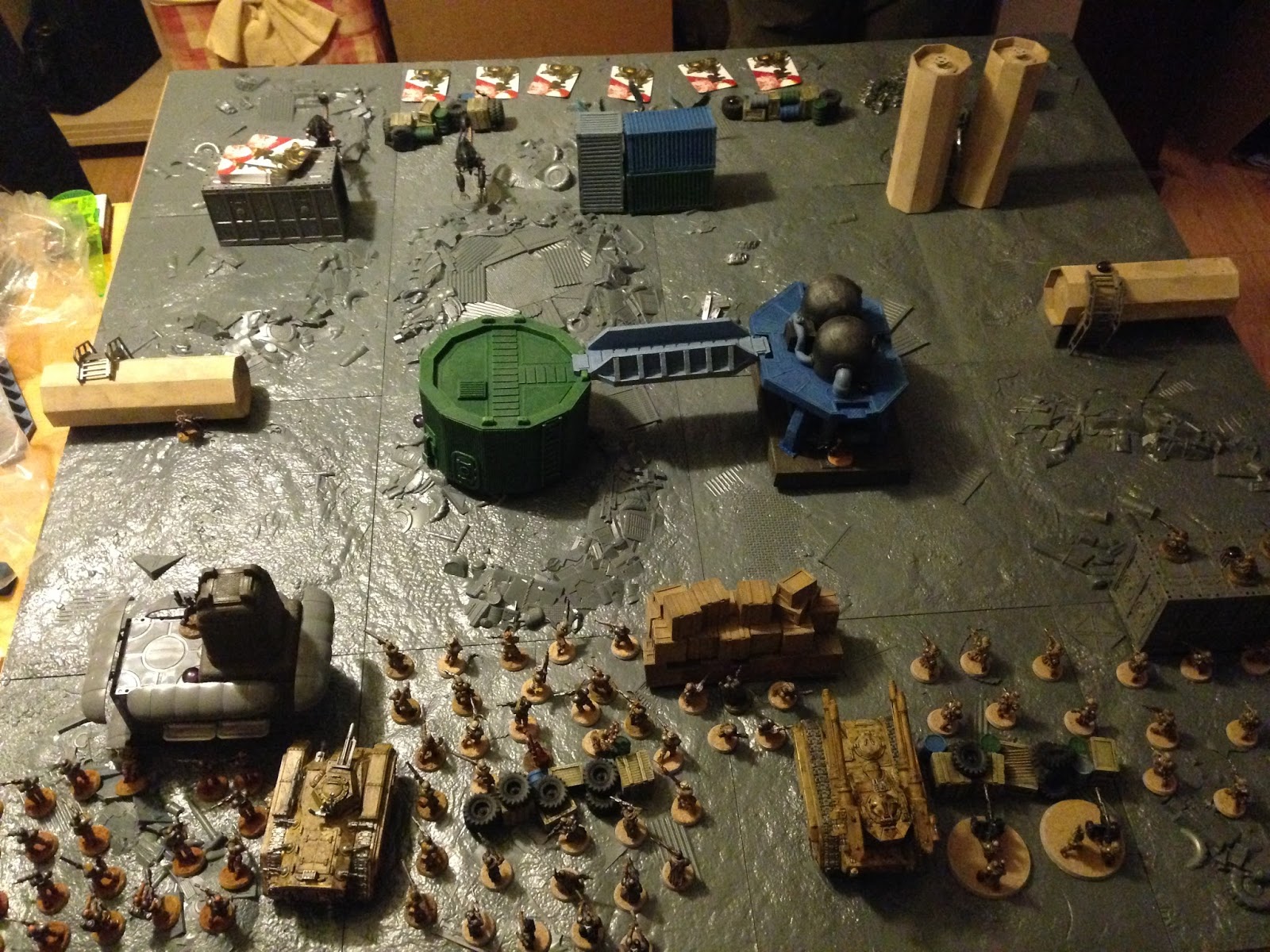 There was a definite disparity as far as the board was concerned - my deployment zone was full, while his had some small squads and a smattering of Talos. 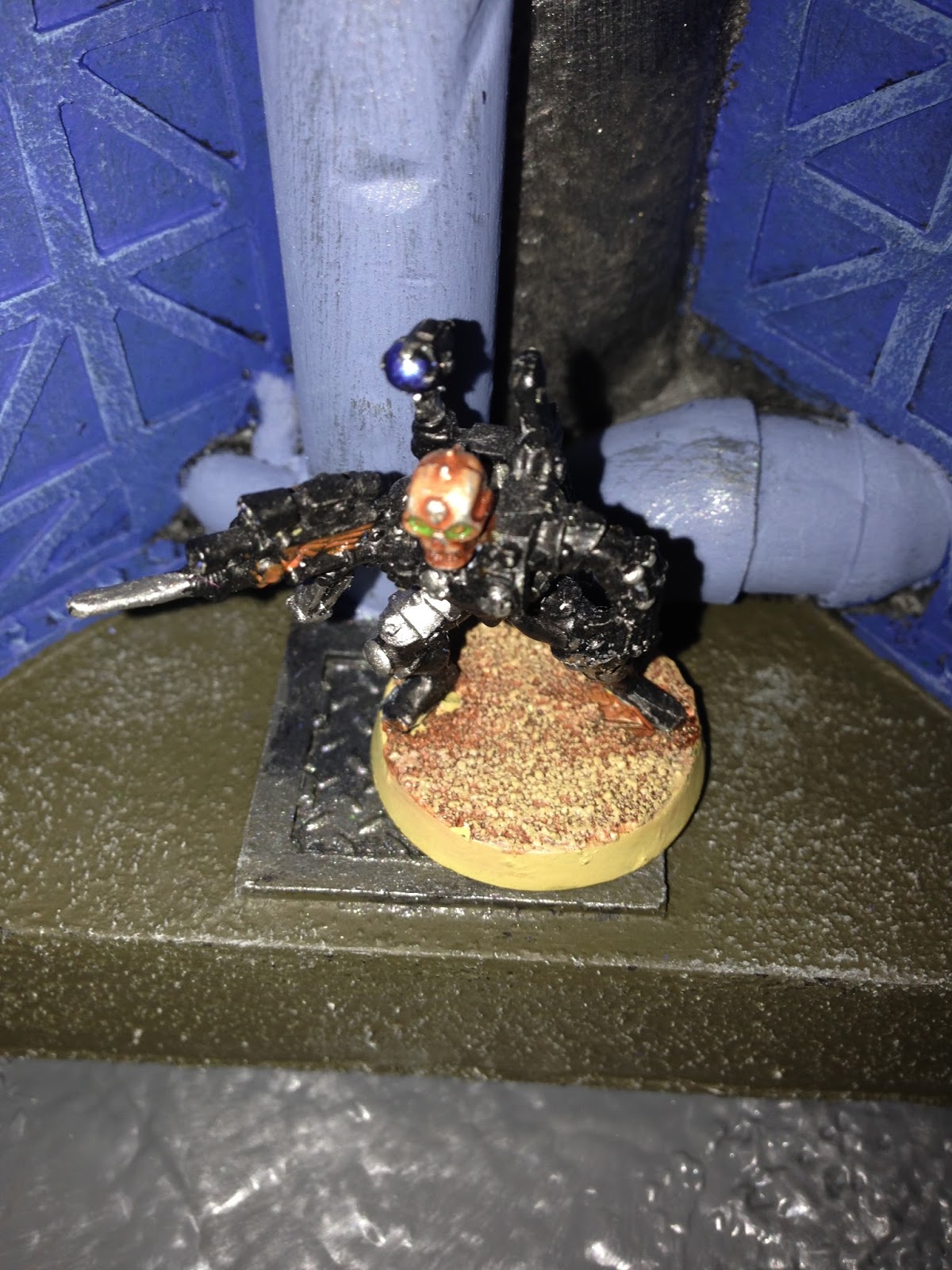 And this is taking into account I had a whole bunch of assassins. 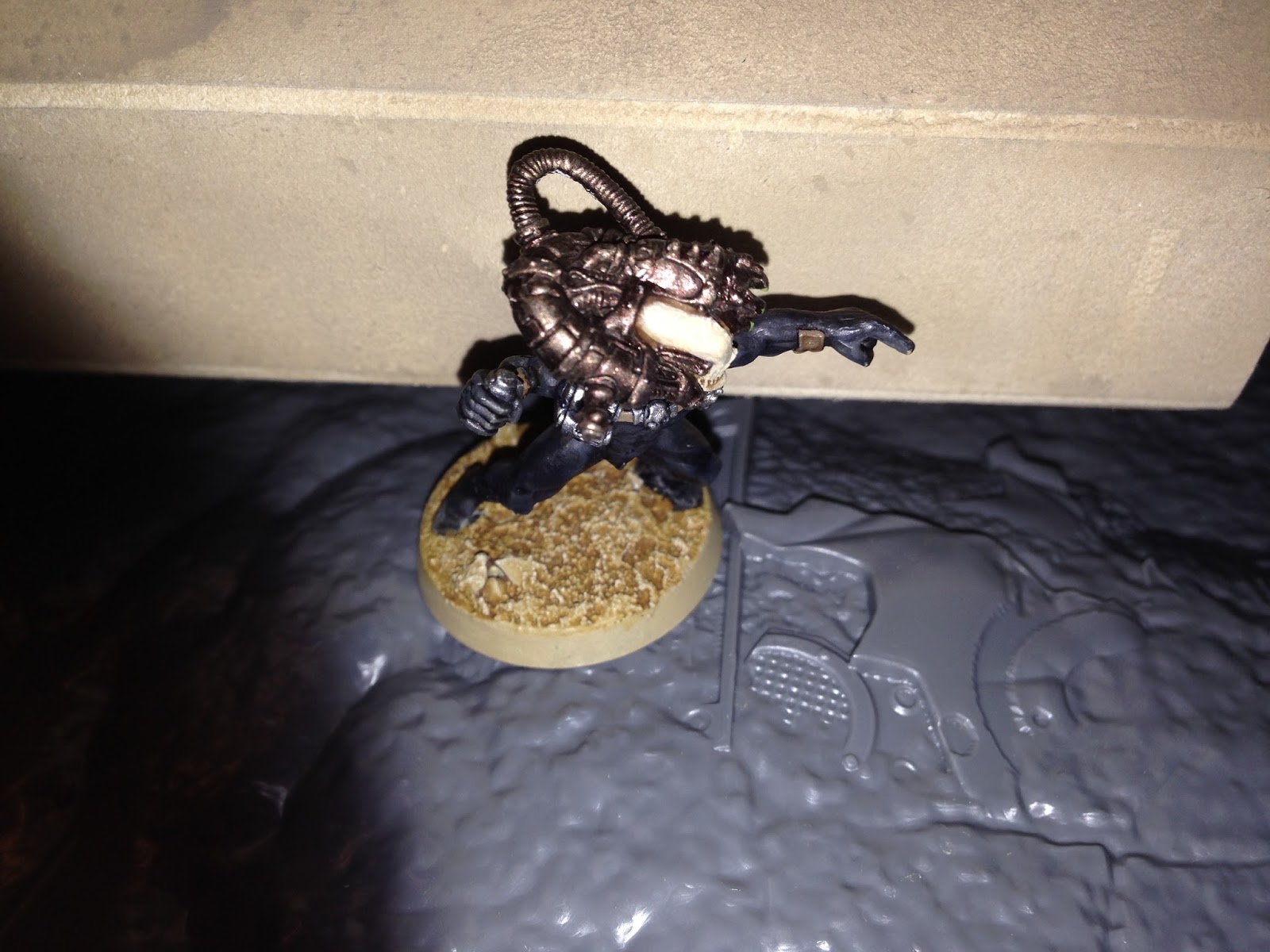 They were scattered all over the table. 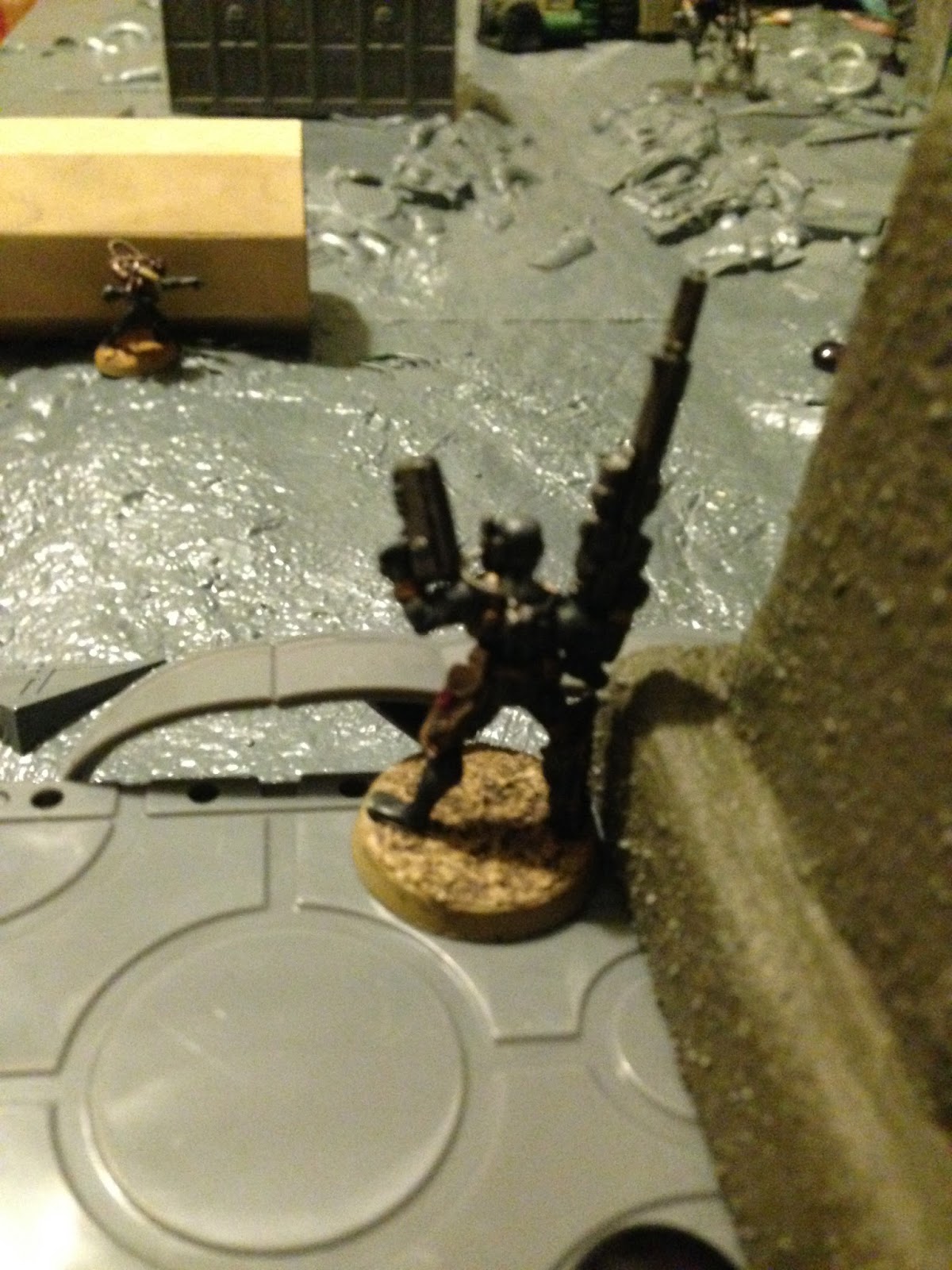 With the Vindicare being in a good spot to put holes in things. 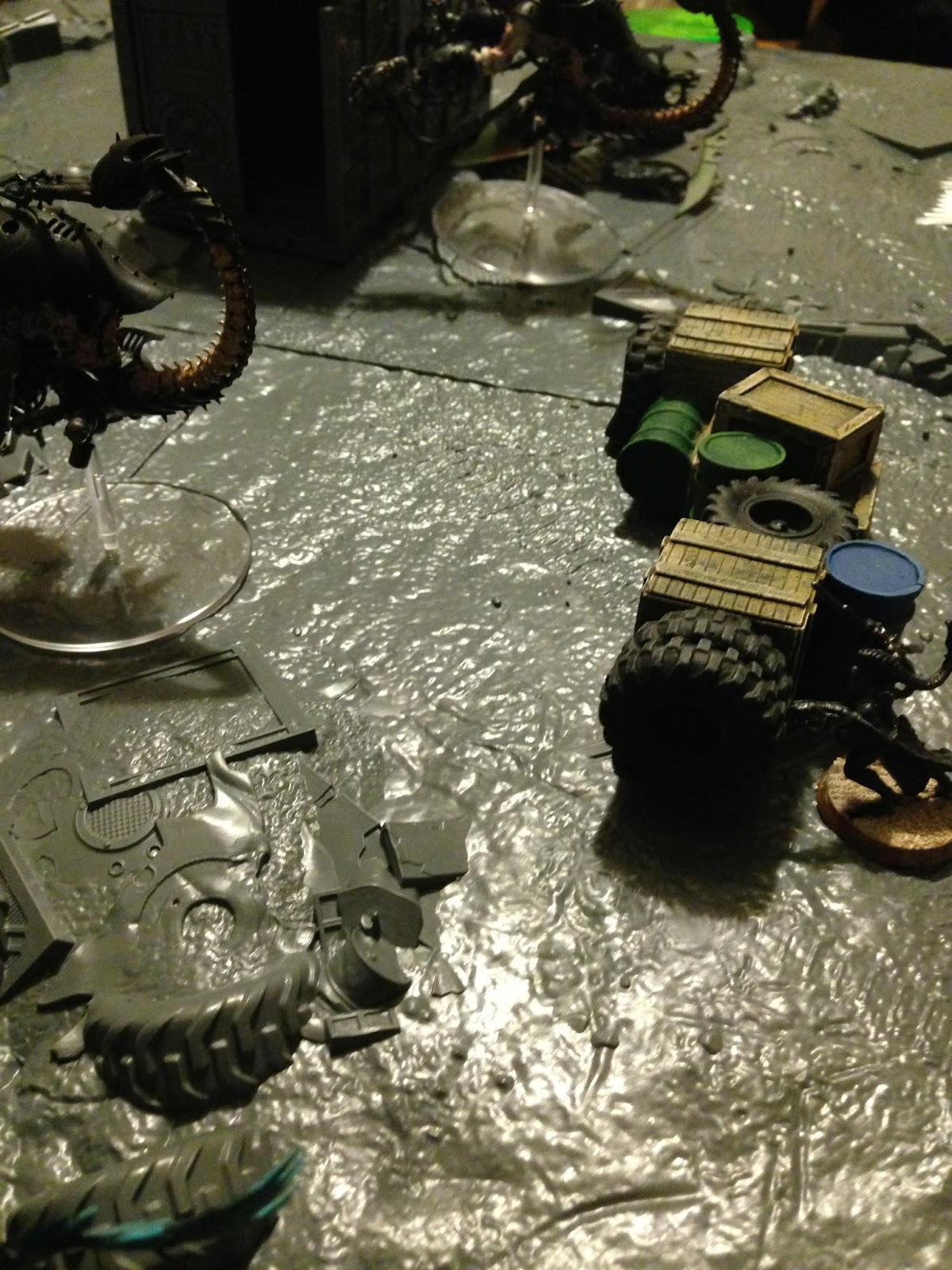 The Callidus, meanwhile, jumped out in the enemy deployment zone for extra mayhem. Soon enough, the assassins were in combat with the Talos. It turns out, they're not very good at killing monstrous creatures. 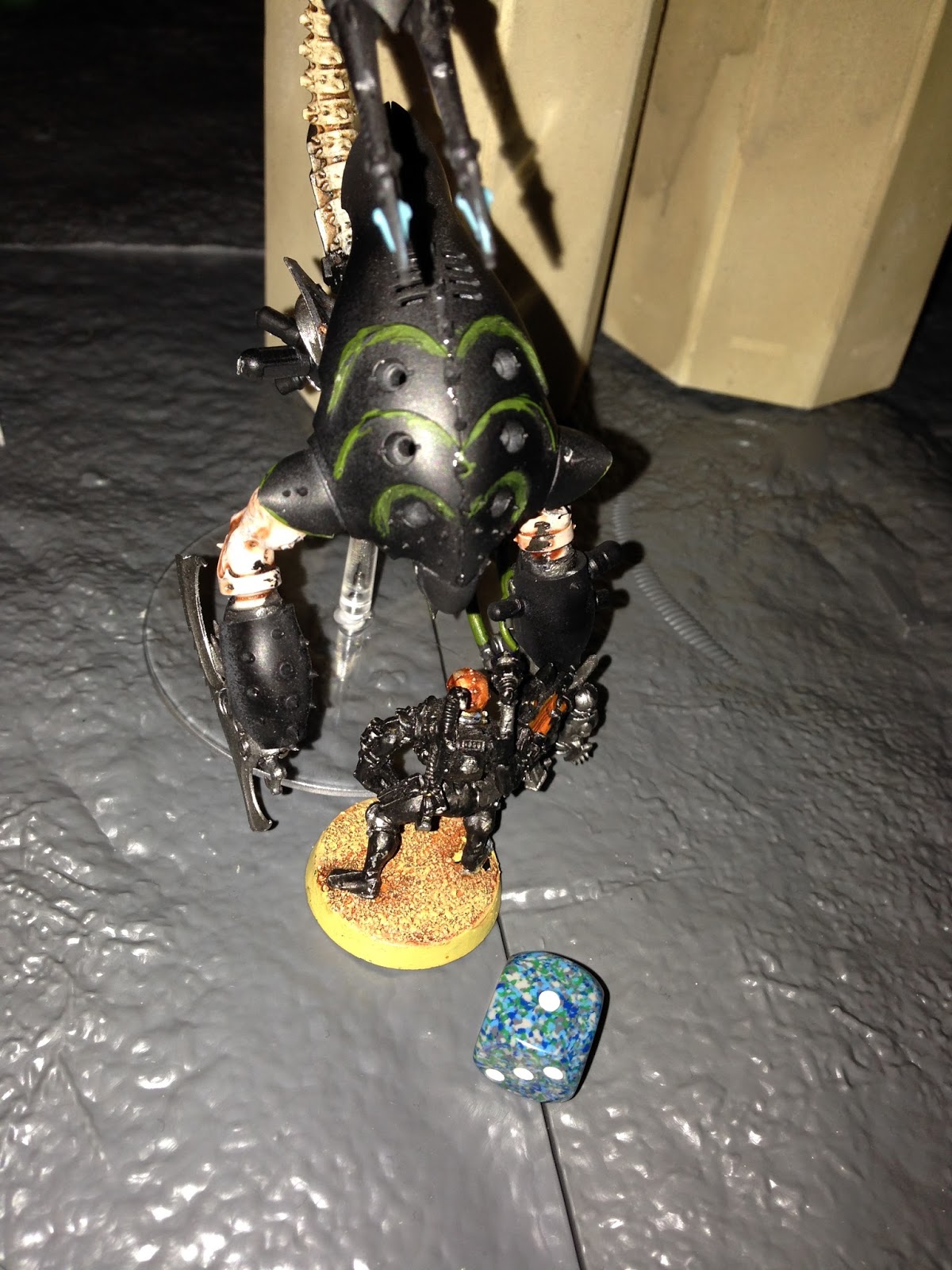 The Eversor was rolling terribly. He should probably have been able to get one. 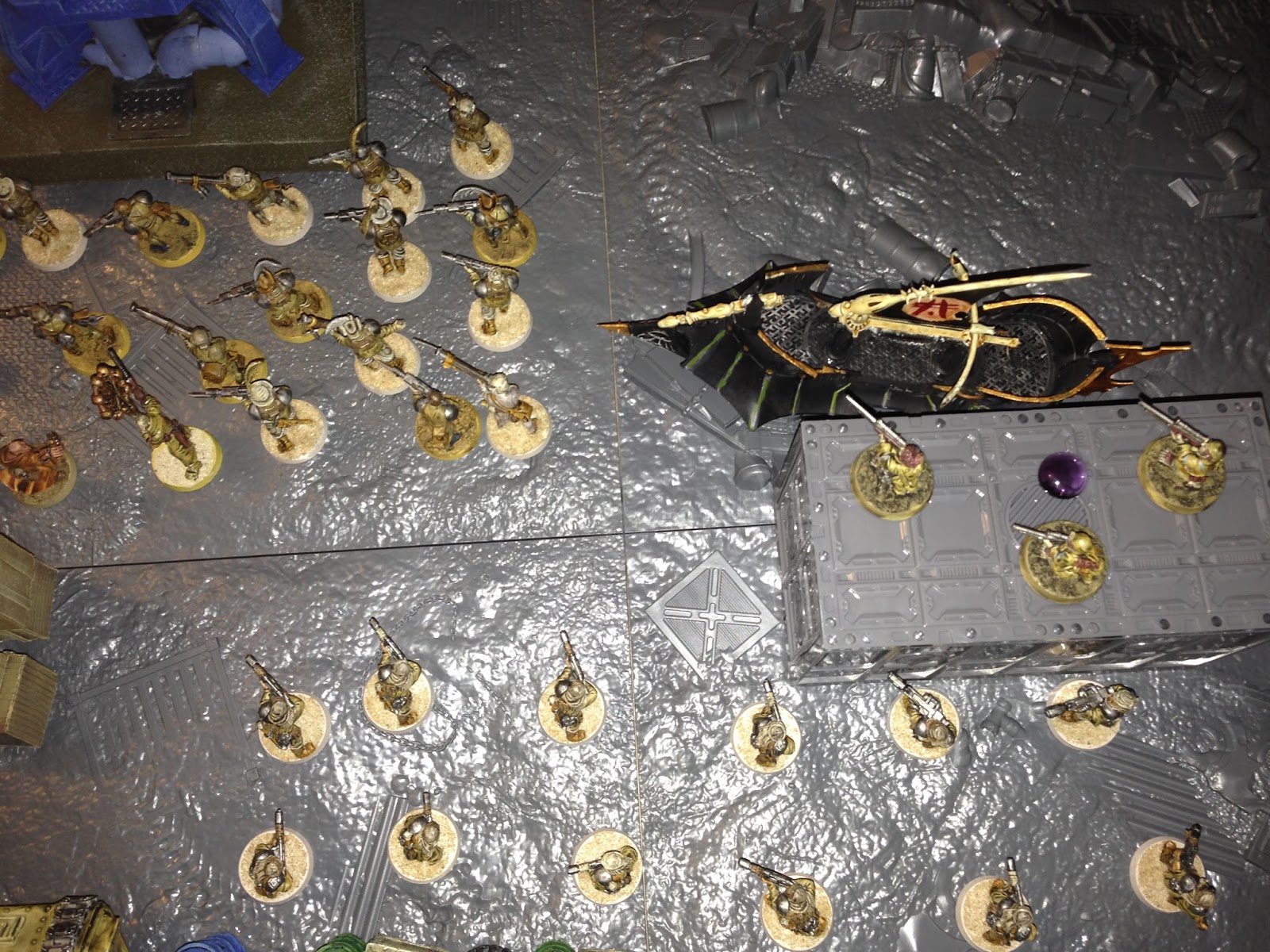 And then, webway portals with a Raider full of Grotesques with Liquifiers. 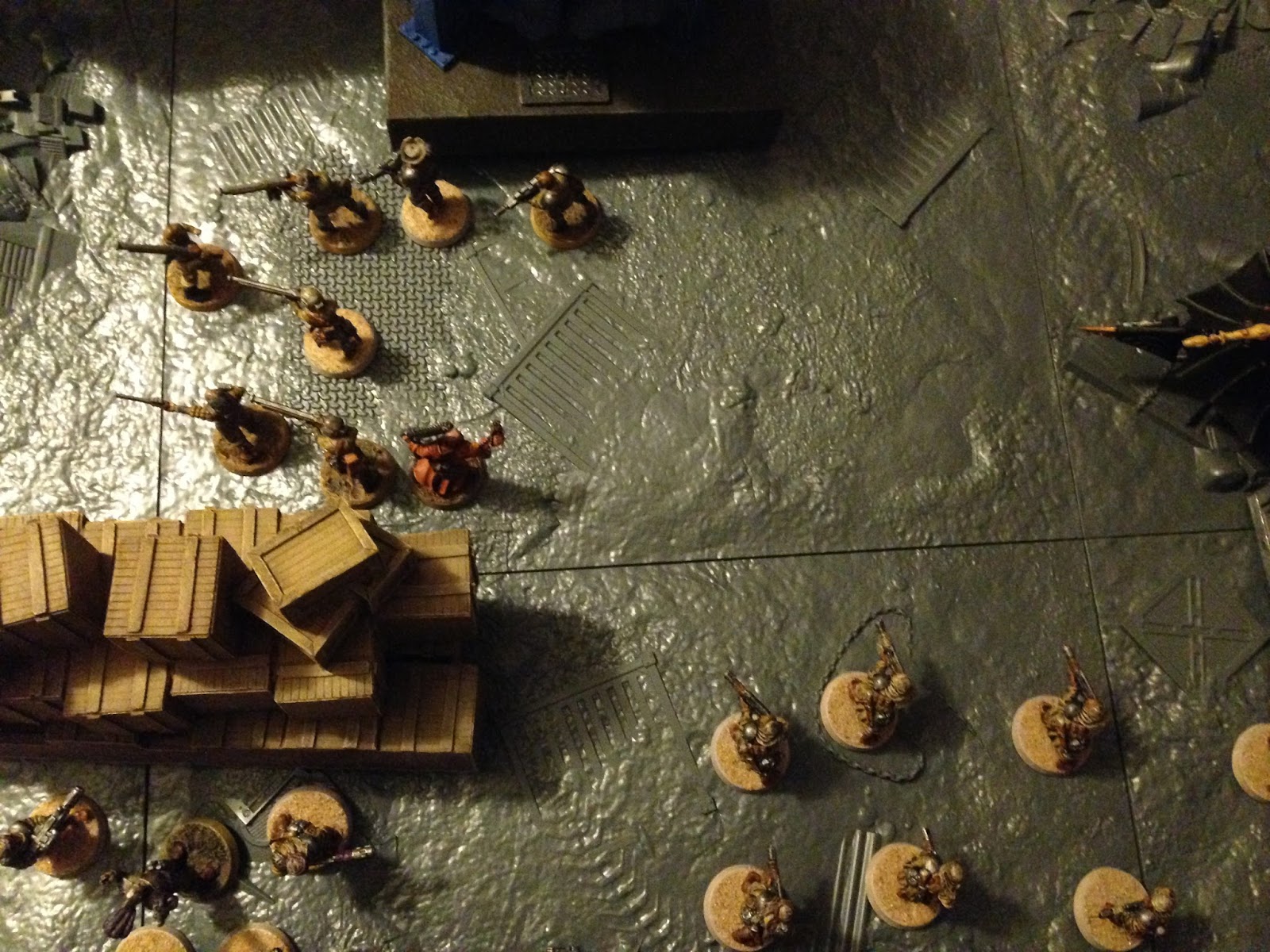 And then there's one less squad. 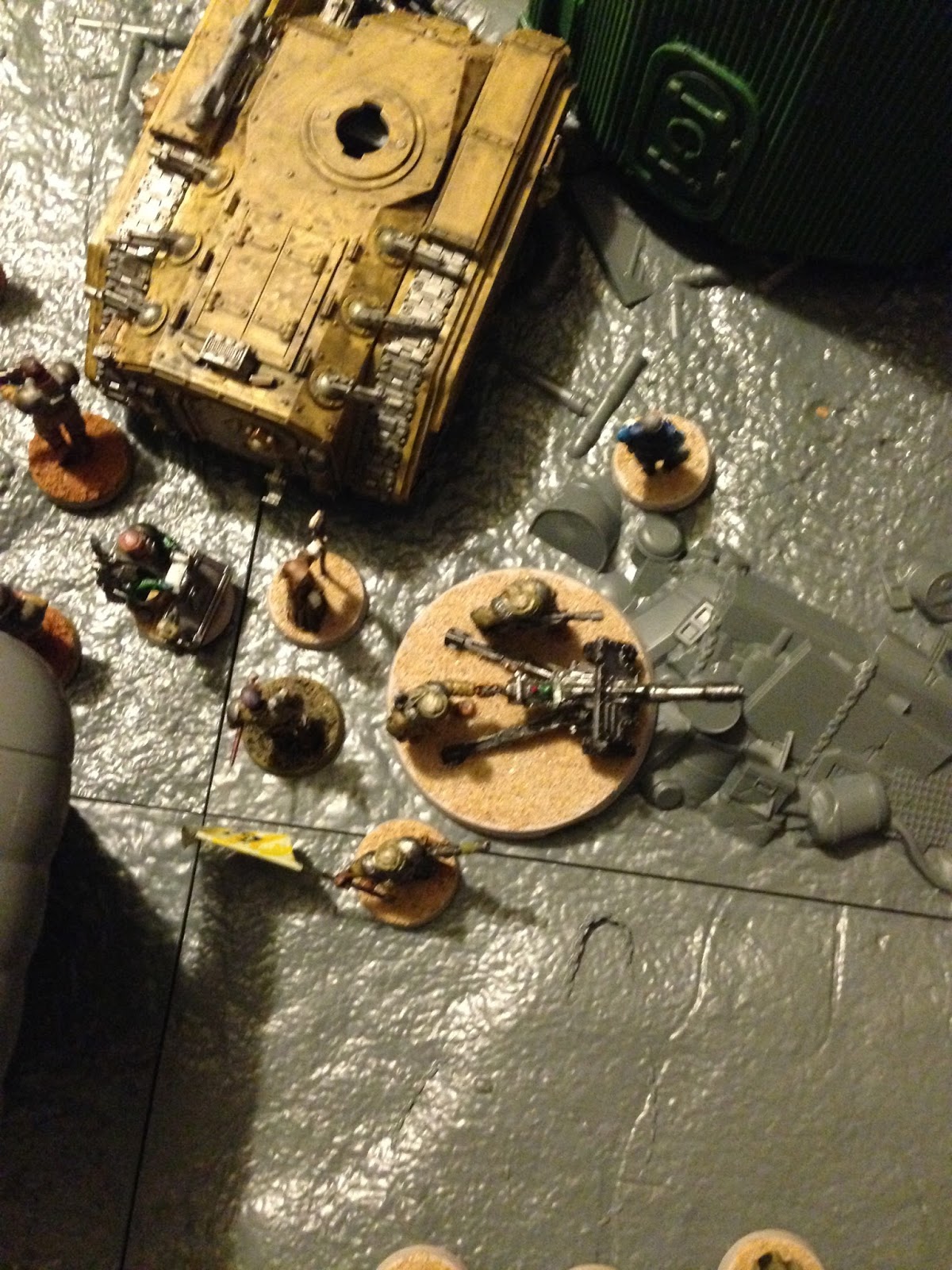 The command HQ bail out of their wrecked Chimera. 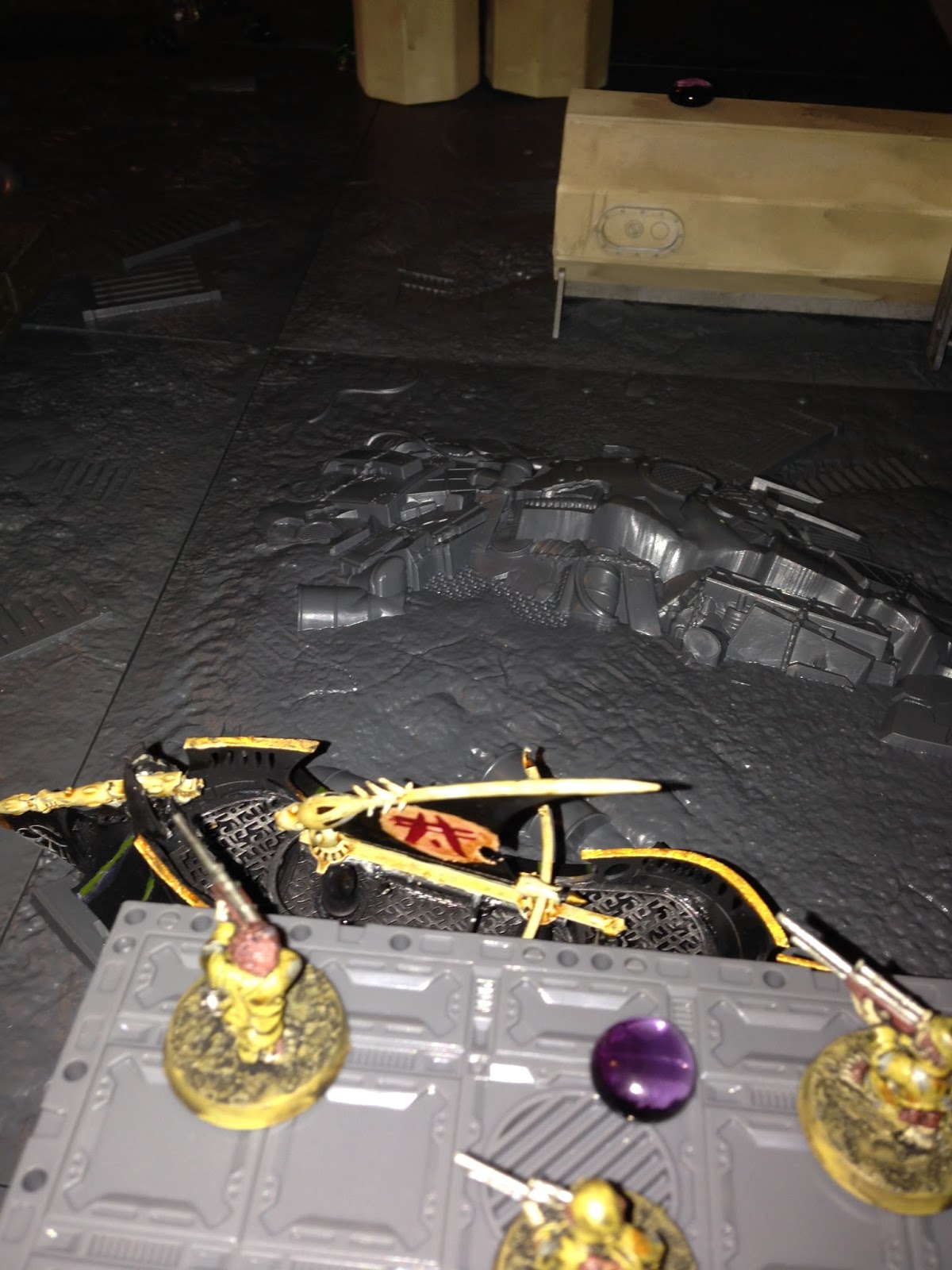 The Ratlings try very hard not to be threatening. 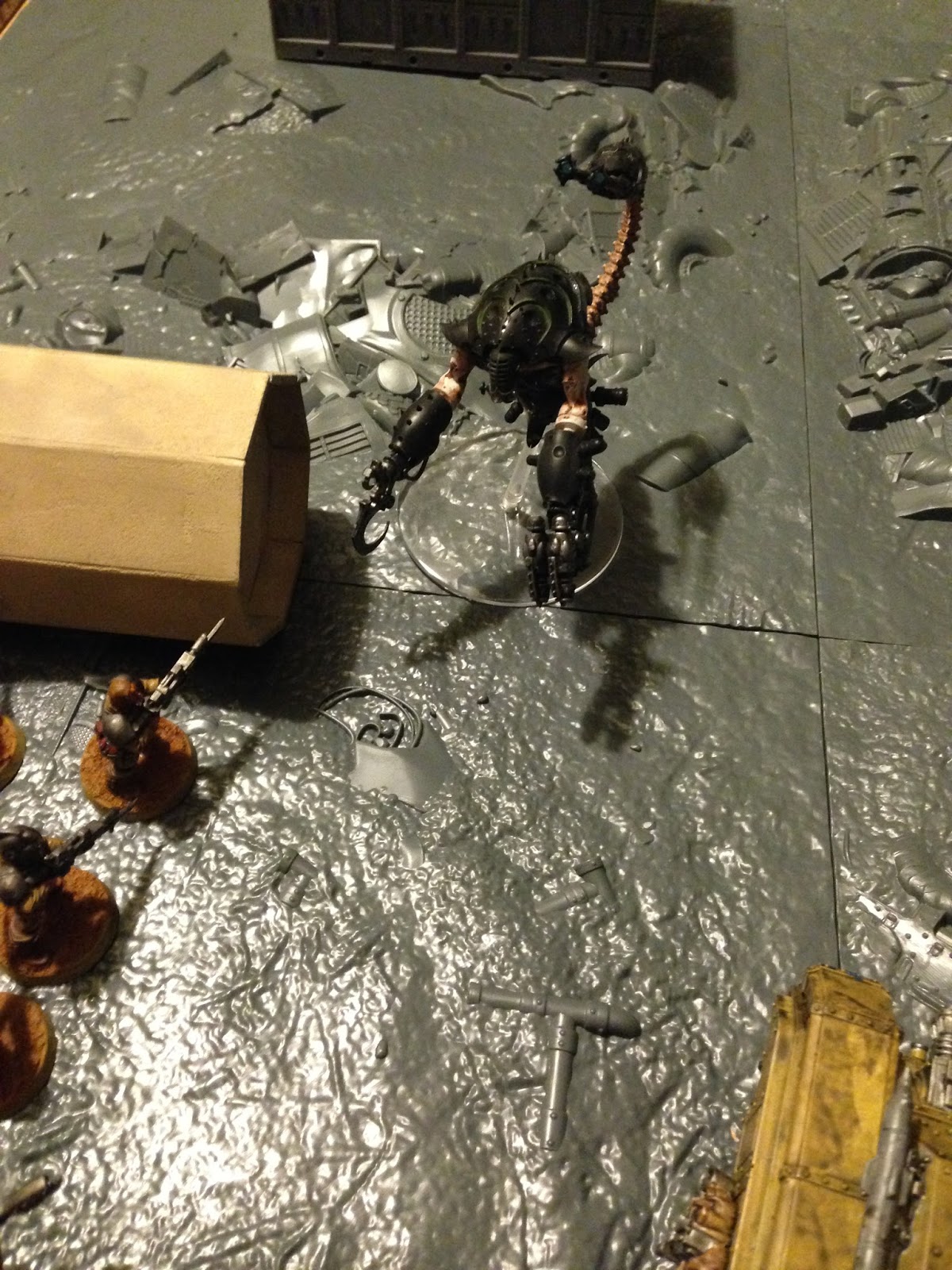 Meanwhile, one of the squads on the flank goes to hold up a Talos, which has dispatched the assassin facing it. 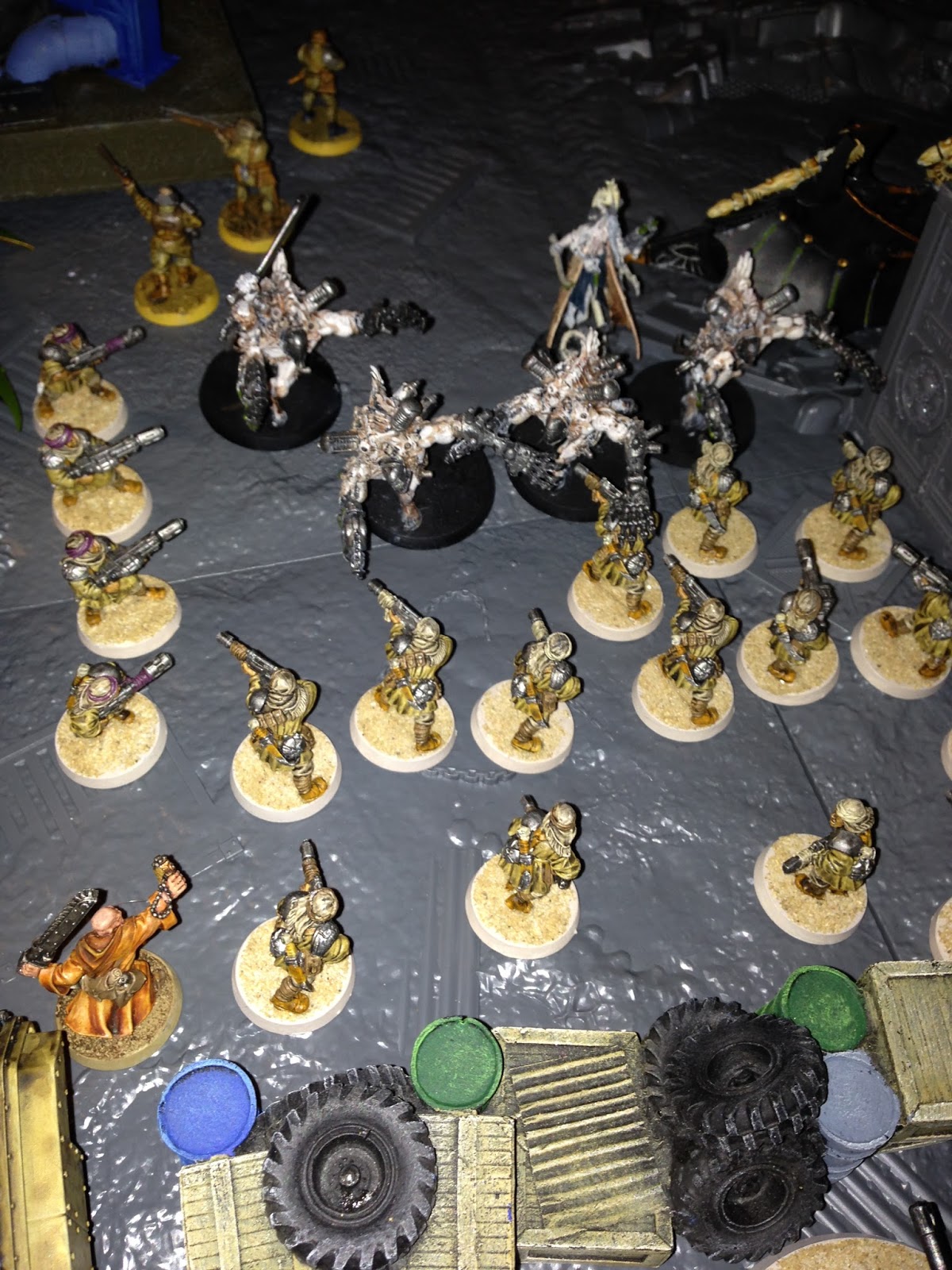 There will shortly follow a demonstration of why masses of template weapons suck for Guard. 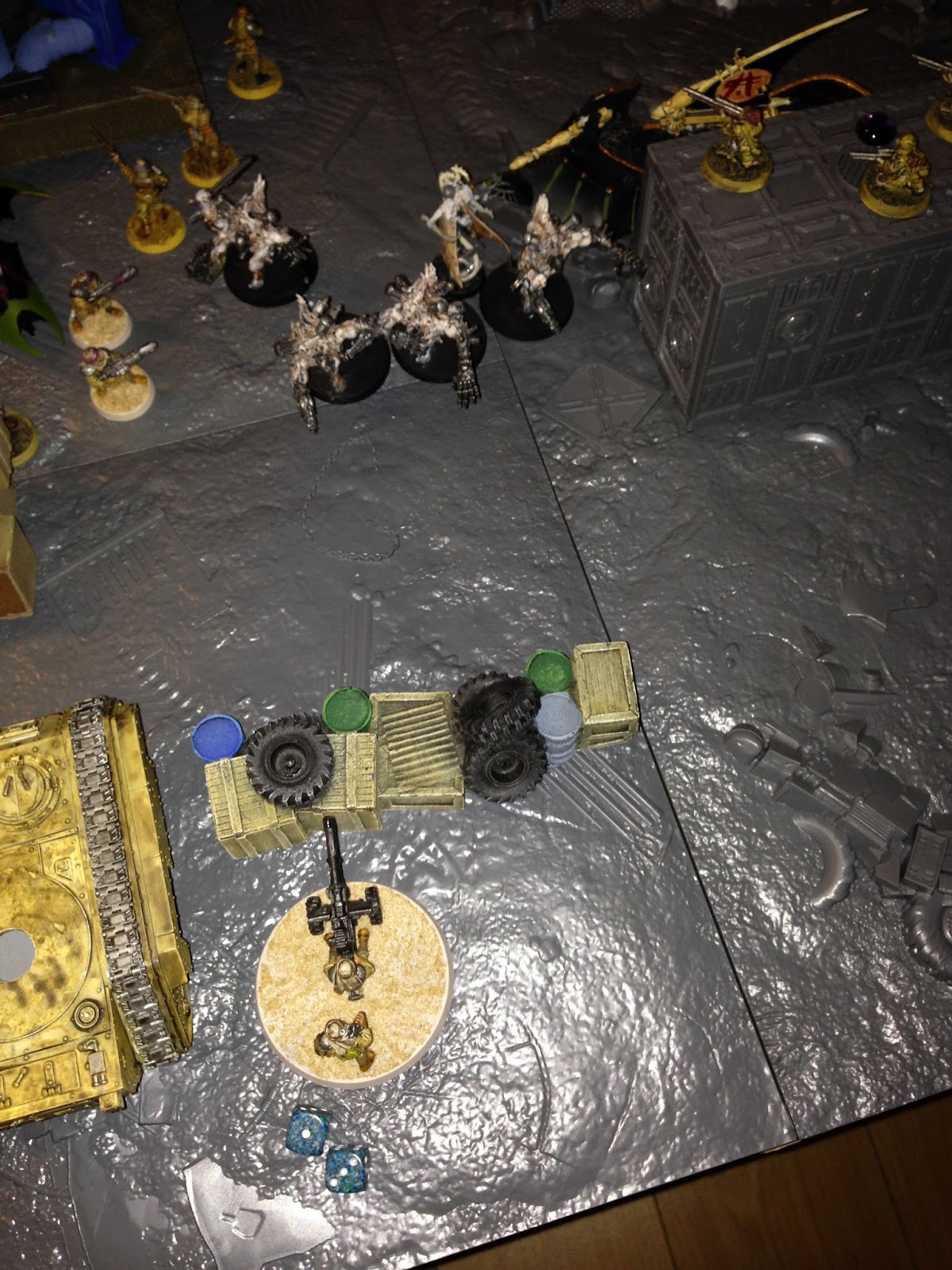 This was one shooting phase. 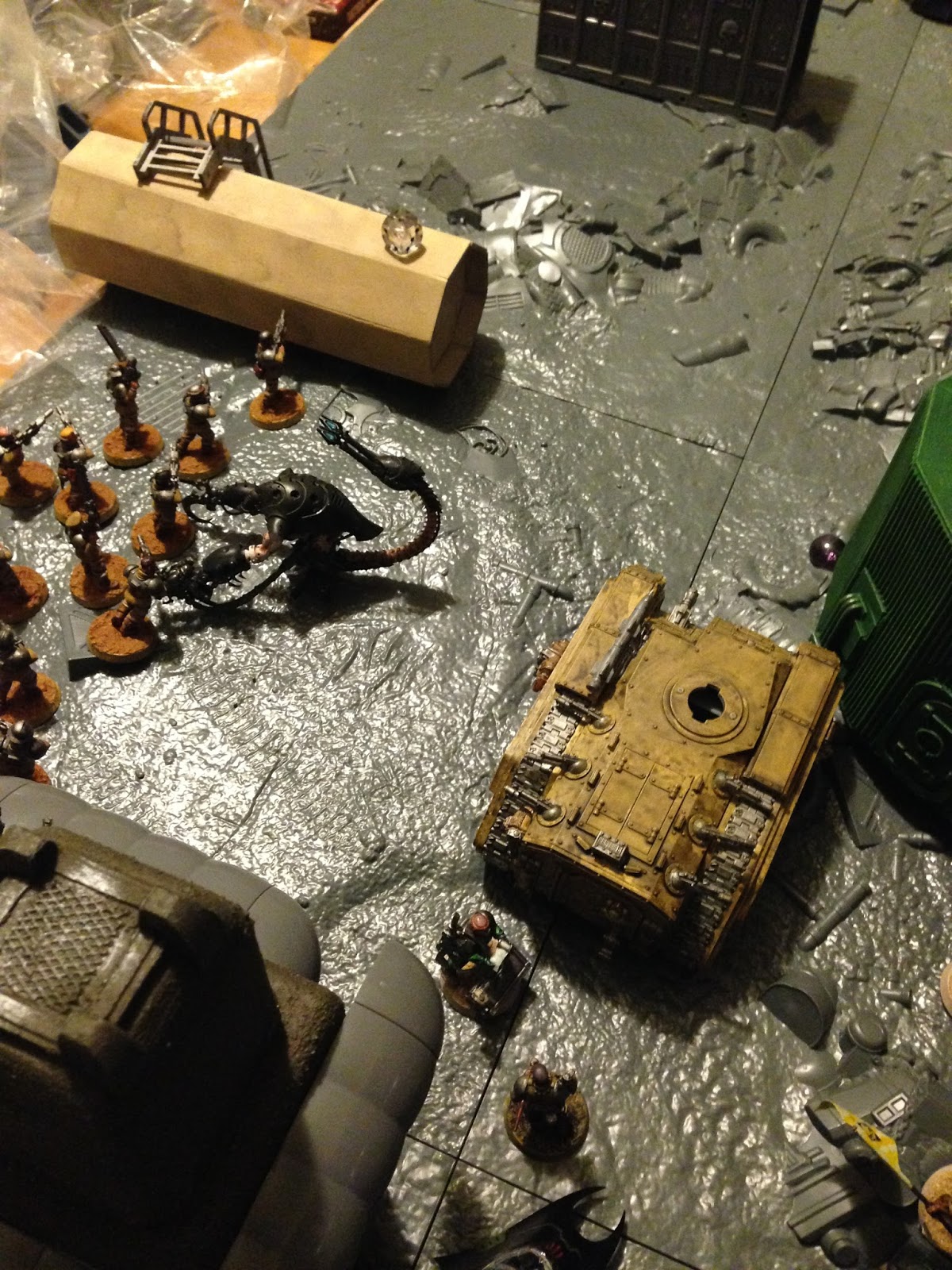 Most of the Command Squad are dead, the Guardsmen are in combat with a Talos. 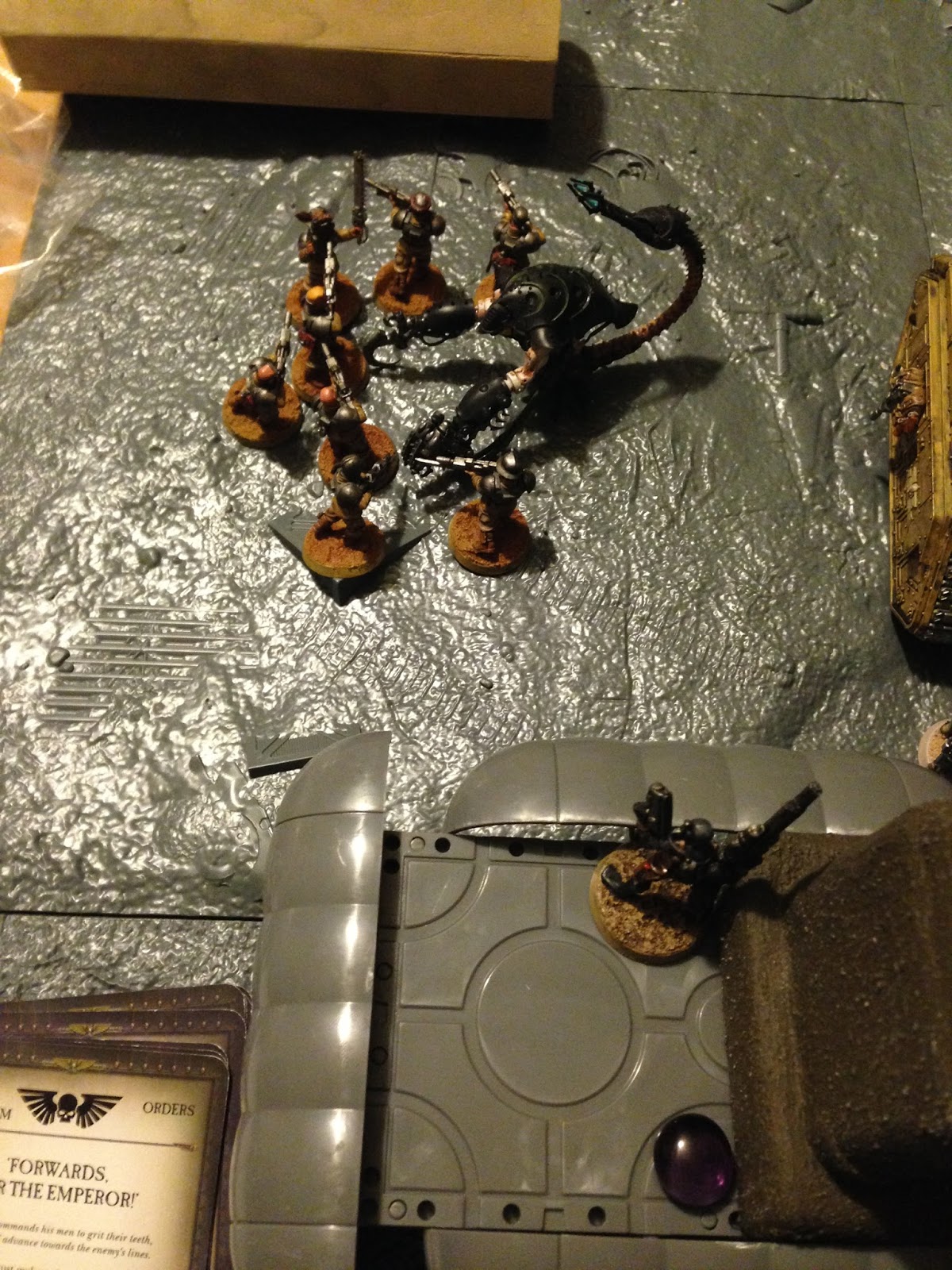 They manage to hold it off OK. 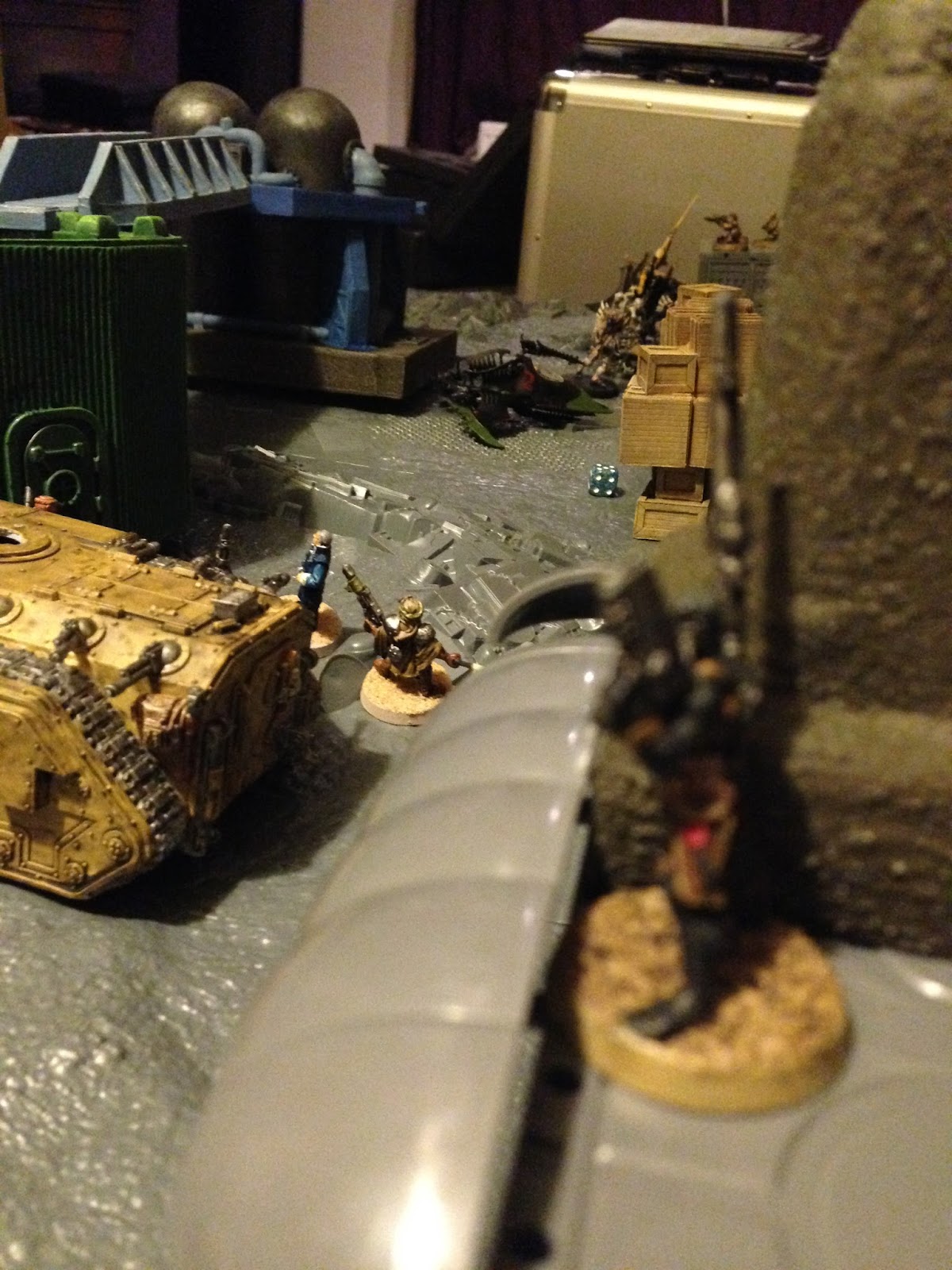 The Vindicare takes a shot at the Dark Eldar Warlord, hoping for a cheap victory point. 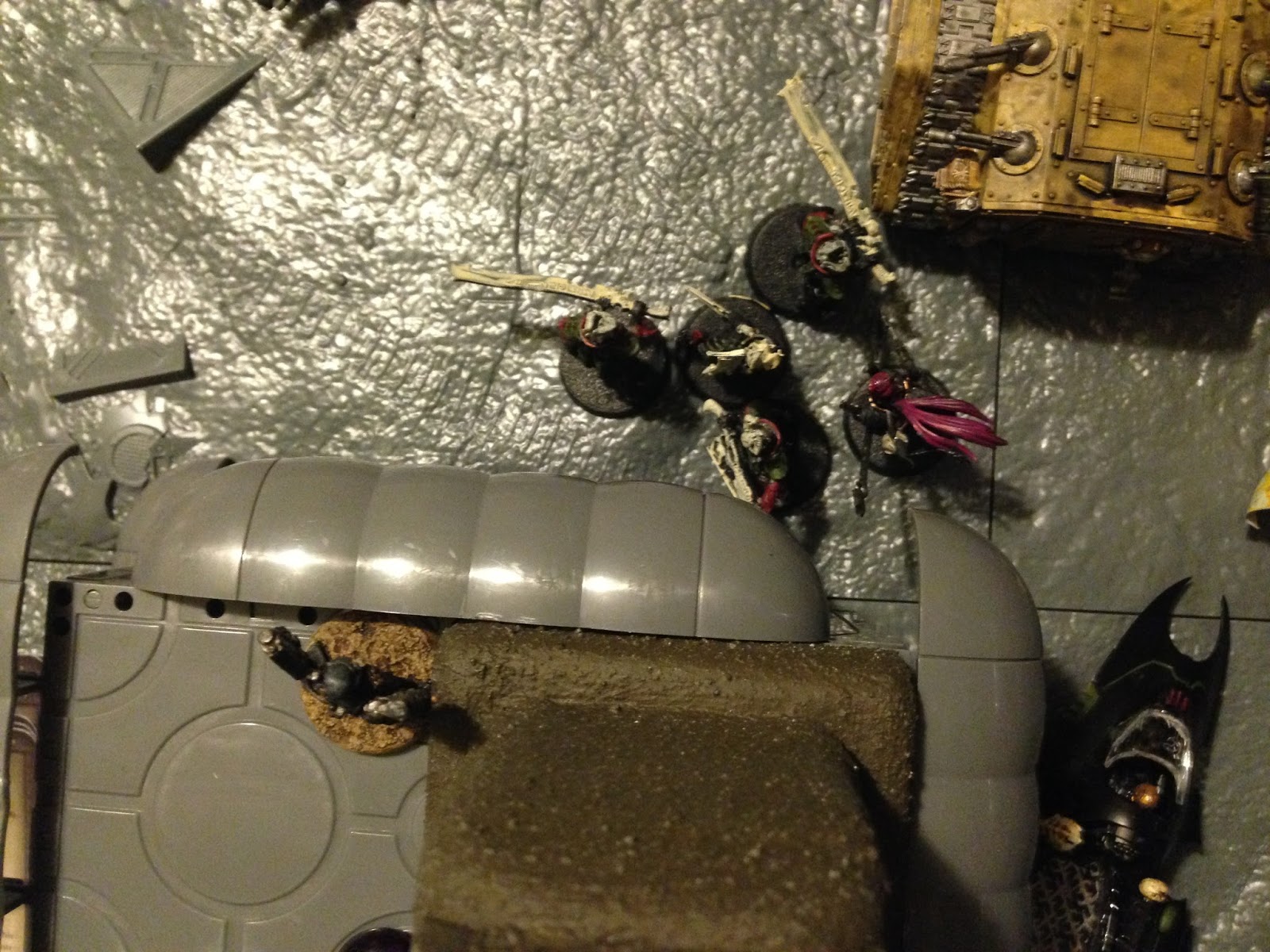 But a squad of Incubi are on the way to put paid to his efforts. 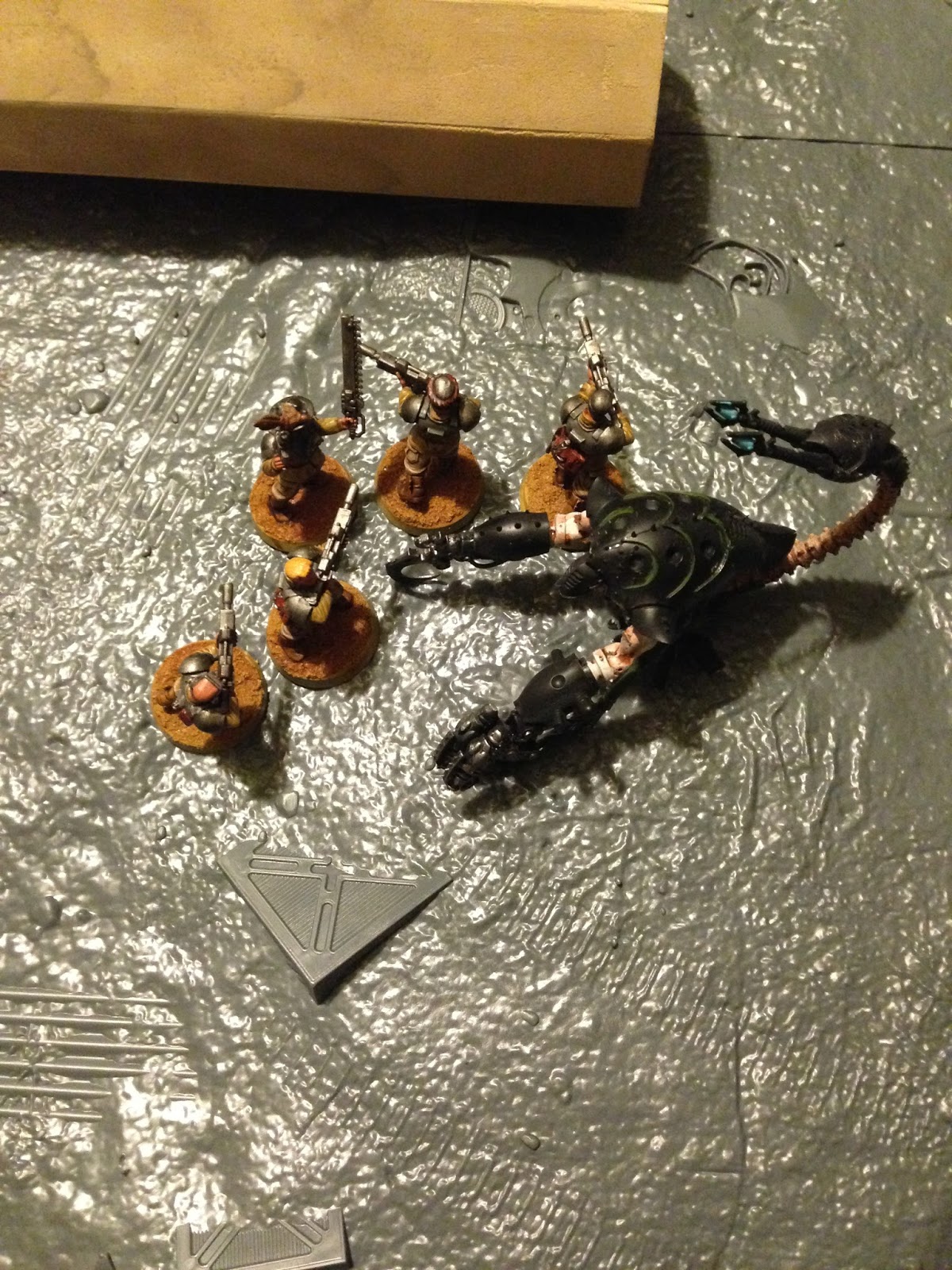 The last Guardsmen on the board before the tabling are the ones facing the Talos.

All in all, I was outplayed and out list designed. I had nothing that could deal with Talos, and nothing to deal with deep striking Grotesques. I've not played 40K since this game - I'm still trying to think of something that Guard have which can deal with this design of list. I'm kind of stuck.
Posted by The Responsible One at 17:45 10 comments:

Well, I'm sitting around in Bugman's posting this from my phone. It's a bit of a slack Monday post, but you're going to have to live with it! Refunds can be applied for from the usual address. ;-)

We attended the Grand Opening yesterday, and came back today when it was quieter. We had an excellent chat with some of the studio and Forge World staff yesterday - today has been more about the non-event Warhammer World exclusives.

Also, the blog passed a milestone last week, surging past 100,000 views. Now, a lot of that was from back when I typed up the Forge World seminars, but the traffic from that has reduced in the past few years as other people have been able to get faster reports out than I have. I don't begrudge that - I started reporting events because I was seeing so much mis-remembering or out of context quoting. There's now people being proactive, getting high quality pictures and good write ups. Fair play to them - I'm not interested in putting in the effort to do that - I've always been a hobby blogger first and a geek hobby gonzo journalist second.

The 100,000 count is obviously going to be a bit misleading - there will be piles of bots and other junk in amid the hobbyists. Still, it is a milestone of sorts which I'm happy with. There's still folk who read and comment, or say they've read the blog. I still mostly get blank looks if I meet a hobbyist and mention the blog, with a few rare exceptions.

The rest of today is a day of daydreams and thoughts of what might be in the future. This is no terrible thing - I want to do fewer posts bemoaning that I've not got things done, or over-thinking how I organise my painting. I also wonder if the answer is to read less and write more. Thoughts are still half formed, and if they crystallise, I may share them. In the meantime, happy dreams and hobby.
Posted by The Responsible One at 15:24 7 comments:

Assemble all the things!

I've not been very inspired by the paintbrush recently, but I have been happily plugging away at cleaning up models and assembling them.

First up are the Snorklings. Some of these I picked up with my Warmonger Miniatures goblin purchase. Others were from Foundry's Goblinaid pack. Some of them are meant to be part of a "set", where I don't have all of them (one is meant to be leaning on a cart, but I have no cart, and the snorkling rider whose mount is eating a friend is meant to have another Snorkling with a rope trying to hold it back), but I managed to tinker about with them until they looked OK.

A lot of the Snorklings are doing relatively domestic things. I have a strange and unrepentant love for the baggage trains of 3rd Edition Fantasy. And I am not the only one. As such, in my head, when I have an assembled Oldhammer army with a glorious and complicated baggage train, these chaps will deployed near it as hangers on lurking around for scraps, but also a useful tarpit to get through if you really want to see what a goblin keeps in his cart... 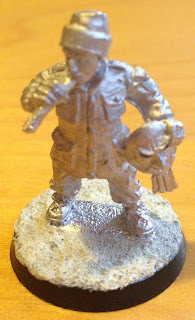 As I'd opened the Goblinaid blister, I thought I might as well get Little Kev sorted out. Quick cleaning off of the flash, bit of glue, a little sandy paste, and he's ready for undercoating. Even small progress is progress!

The assembly stuff is also working well for me because I can do little bursts and come back to it. With the model below, I only really got him out on Sunday, got him cleaned up, his arms on and a pin in the foot in a couple of passes over Sunday, and then glued him to the base and added the brass etch this evening in between taking the photos of the other models for the blog. 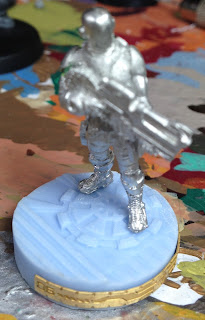 Wow. My photos seem to be really blurry today. I've managed to focus on the feet and not the head here. This is a Prowler with Spitfire for Infinity. He's one of a couple of models I bought with my prize voucher for coming third in the Dark Sphere Slow Grow League. His base and etched brass facing marker are by Antenocitis Workshop.

I'm trying to be better now about turning around stuff relatively quickly when it comes in, although there are strange and complicated rules about this in my head. Execution Force I'm holding off on until I've finished assembling the Space Wolves from Stormclaw, for example.

I know, academically, I'd much rather be getting models completely finished - painted, based and ready for play. But I don't want to push myself into doing something I'm not inspired by right now - this is a hobby for enjoyment, after all. So, I'm getting productive stuff done with the hobby, and if I don't feel too guilty, I can put some undercoated models down - at least it's better than proxies, right?
Posted by The Responsible One at 20:02 5 comments:

What else I've been up to

With life being so busy, I've not had much time to post as much as I'd like. So, I'm taking the bank holiday weekend as an opportunity to get a couple of posts "in the bag" and scheduled to post. 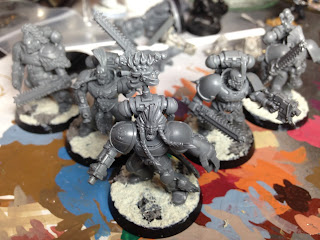 I've finished assembling the Blood Claws from the Stormclaw boxed set. These are the first Space Marines I've ever really assembled, apart from a push fit Marine once for a painting lesson. I upped their base size to the new 32mm, because I think it looks better. 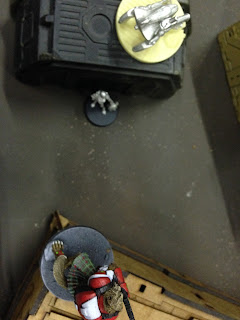 I came third in the Infinity Slow Grow League in the end - Infinity has proven bad for doing battle reports as it's simply too time consuming to take the photos unless you're doing it as a dedicated thing for a battle report!

We had a quick multiplayer game of "Infinity Hunger Games" to celebrate the end of the League. 75 points, no more than 3 figures, and a few special rules. I took Zoe, Pi-Well and a Total Reaction remote. This made some people very sad. Here is an angry werewolf mercenary in a kilt jumping up to take revenge. 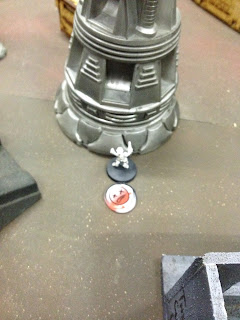 Pi-Well made it to the centre and looted a MULTI-Rifle, but was gunned down shortly afterwards. Still, despite the brutal kicking I received, it was good fun, and I'd try it again some time.
Posted by The Responsible One at 20:41 2 comments:

Monthly Targets: April - Well, we knew it was a write off, didn't we?

With Salute being in April, we knew it was going to be a write off in terms of purchases. Still, I managed to be moderately productive, and did get two projects finished!

It's been all Oldhammer this month. You've already seen my Chaos Thug, painted for a challenge on the Oldhammer forum. 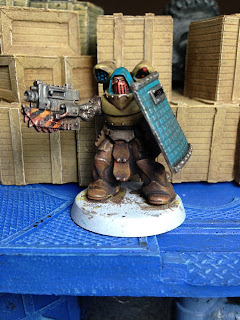 This is Boatswain Rickard. I previously showed him unpainted, as one of my acquisitions last month. I'm really happy he's been turned around the following month and done. He's not got a base as that's the rules for this Oldhammer forum challenge he's for. He'll be winging his way off shortly to join the rest of the pirate crew - one lucky participant then gets the crew and can base them accordingly.

So, on to May! I'm onto a shaky start already as I seem to have acquired an Execution Force box...
Posted by The Responsible One at 17:19 6 comments: