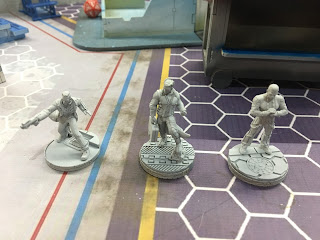 As part of the B4ckd00r challenge, a new mission, Unveiling, has been released. In it, you have three civilians on the board, one of whom is the target and the other two are decoys. You need to hack consoles to find out who the target is, then kill the targets and the decoys - but not before!

I was playing Riker from HATE club, and he won the first turn. 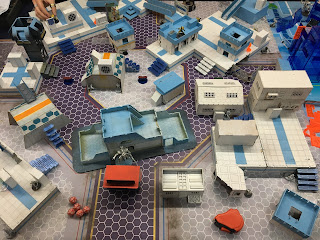 With Yu Jing gaining the first turn, I bunkered down my forces. I left my Spektr Forward Observer in hidden deployment behind the real target, who is on the right behind the building with a sloped roof. My other two targets are tucked up behind the warehouse with the orange stripe and the air conditioning unit on top of it. 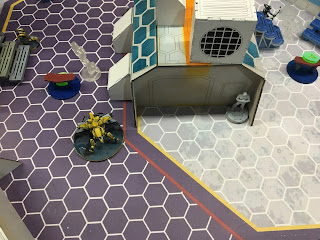 The Yu Jing MSV2 remote ran up and took out the two decoys. 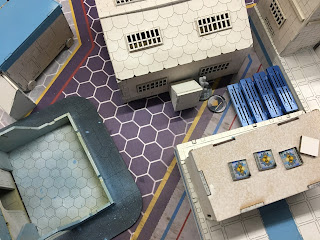 A Su Jian ran up onto the roof a tall building using Climbing Plus. It went for the last target, but my Spektr managed to Flash Pulse it and landed a critical hit. The Spektr was then taken out - I think by the MSV remote? 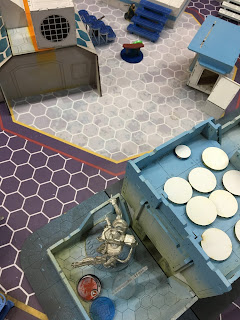 I brought my Iguana out to try and cause some damage and inhibit enemy movement. Unfortunately, it wasn't enough, and it was taken out. 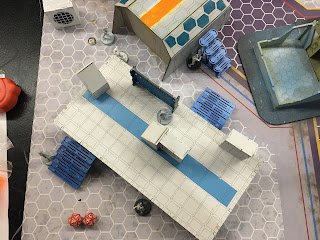 Before long, I had a handful of figures left. It wasn't enough to punch through to the consoles, leaving Riker with a strong 10-0 win.

So, two lessons here. One, I was lacking in ARO pieces to inhibit my opponent's movement on the first turn. The other thing was the mission really favours getting control of the consoles first and making it hard for your opponent to do it in return - meaning if you lose initiative, you need to have strong ARO pieces. Something to definitely work on in future. 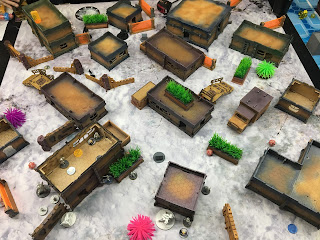 The world of Infinity has become even more interesting recently. Alongside the B4ckd00r event, Corvus Belli have announced a new book, Uprising. As part of the book release, it's been announced that the Japanese have risen up against Yu Jing. They've now moved to the Non-Aligned Armies, leaving Yu Jing without the Japanese.

I arranged a demo game with essexdave, one of the War Cors, who has got early access to the new JSA army box. I took an assortment of Nomad troops for a quick game of Capture and Protect. 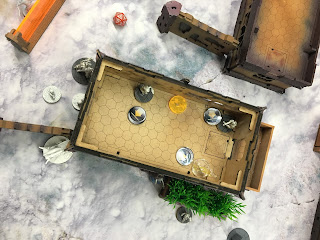 The JSA won first turn, and infiltrated a TO camo marker into the ground floor of a building right by my Taskmaster with HRL. 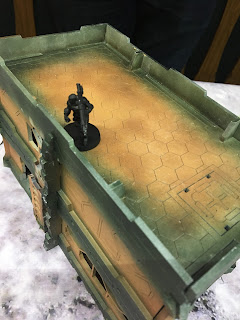 Then a Unit-9 with Heavy Rocket Launcher revealed from limited Camo and shot the Taskmaster - it didn't cause the Taskmaster any damage, but it cleared off the Koalas. 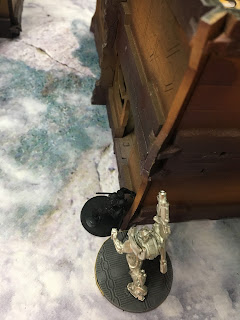 Free from the antipersonnel devices, the Oniwaban ran out from the ground floor of the building and cut the Taskmaster in half  with it's Monofilament blade. 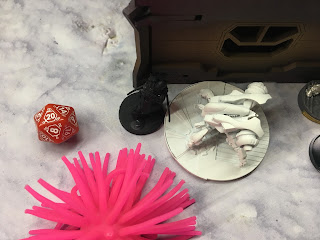 It then ran around to take out the Lunokhod, but the Lunokhod passed it's armour roll and burned the Oniwaban to ash. The new JSA biker model then rushed up and grabbed the beacon. 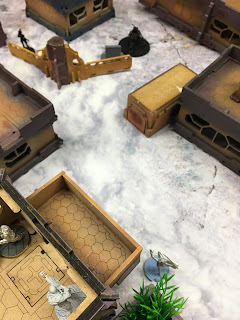 The JSA biker then, despite the penalty to dodging, passed all it's dodge rolls, using Kinematika to escape across the board. 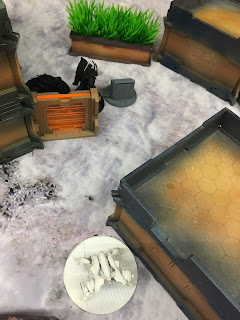 All in all, I'm very impressed by the power of the new HI and biker. The Unit-9 are strong, but I had the right tools to counter them. I still need to work out how to address something like an Oniwaban hitting my lines when my opponent has first turn. Still a lot to learn!
Posted by The Responsible One at 19:00 No comments: 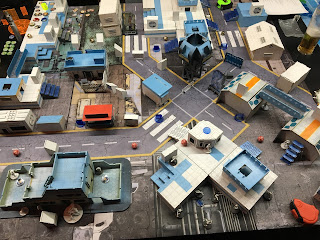 Recently, the Infinity competitive scene has had a new addition in the form of "Challenges". In short, these are story events which are recorded internationally and have an impact on both story and ongoing play.

The first challenge is the B4ckd00r crisis. In canon, a whole bunch of incriminating evidence has been released in encrypted files and threatens the big political players of the Human Sphere. If you play certain missions as an ITS registered game, then your faction can recover some of this missing information. The faction that has recovered the most data by the end of the challenge avoids consequences - and the other factions lose access to a named character who is somehow implicated in the scandal for a currently unknown length of time.

I laid down the challenge to HATE and kaizer82 took up the challenge with his Steel Phalanx. We picked The Grid as a mission, which neither of us had played before, and I decided to take the punchy and direct forces of Corregidor. 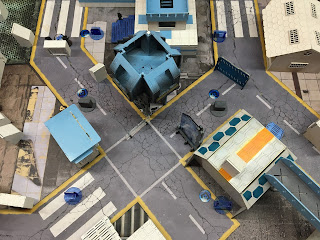 The objectives of the Grid mission are to activate or Forward Observe as many of 9 consoles as possible, and then, from the second turn onwards, blow them up while you've got control of them. You also need to shank up the Designated Target, preferably with your own Data Tracker.

The Steel Phalanx took the first turn and opened with  a link team of Thorakitai Forward Observers running around and Observing as many consoles as possible. This was a big lead I was worried about being able to catch back up from. 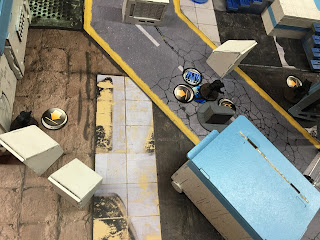 With as many consoles flipped as possible, they settled into cover to await my counter attack, with at least one demo charge placed on a console to detonate next turn, and a landmine set up to impede my advance. 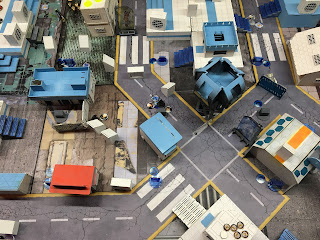 At the end of the first Steel Phalanx turn, they'd set up an impressive lead with eight of the nine consoles owned by them. 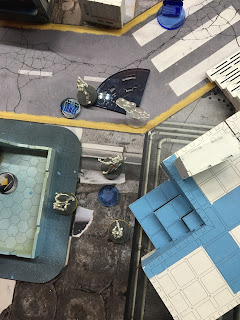 I decided that before I started taking too many casualties, I should make sure that the enemy Designated Target went down. I sent Senor Massacre forward with his Jaguar team under cover of smoke to get the job done. Massacre was the Data Tracker, so he'd have to be the one to get the kill in. 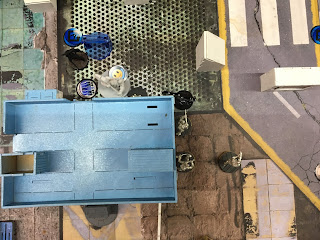 Clearing out a couple of the Thorakitai on the way, Massacre dropped an Eclipse Grenade to hide from the Agema sniper covering the Designated Target, and ran in to get the kill. With the target down, he took an opportunistic pop at Ajax, but missed and took an explosive hammer blow to the head, putting him out of action, but with his job done. 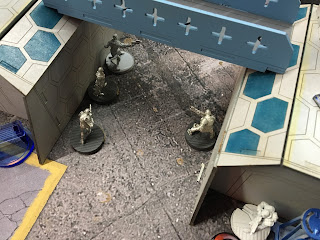 Meanwhile, I moved up the Wildcat Haris team to cover my Designated Target and make sure they were as protected as possible. 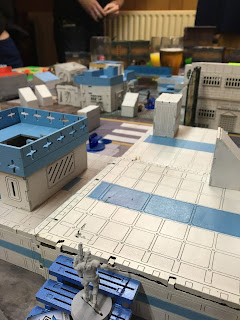 Phoenix decides that the surviving Jaguars need to not be surviving, and hits them all with incendiary rockets, leaving nothing but ash. 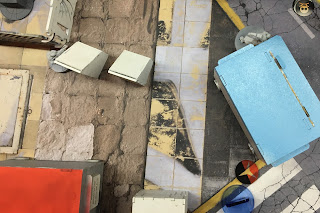 Cut to my turn two. My Intruder advances up and fills Phoenix full of holes, while an Alguacile Forward Observer starts getting some of the consoles flipped to me. 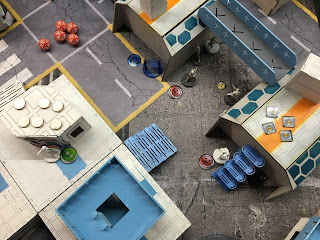 An Ekdromoi Hacker had dropped into my back field and caused some significant damage, although one of the Alguaciles caused some mischief by reacting to them by dropping a Deployable Repeater, keeping them locked down and afraid of my Wildcat Hacker melting their brain. 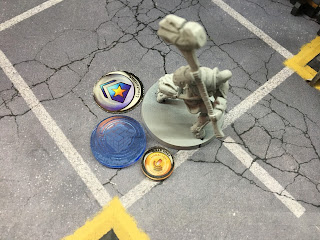 For the final turn, Ajax ran up to destroy some more consoles, but misjudged a second move and took a Hacking attack to the face, leaving him isolated and unable to take any further actions that turn. 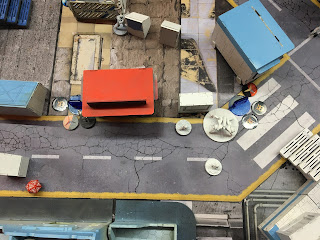 I had a little moment of panic after the game when I realised I'd screwed up and thought it was one action to detonate all your D-Charges, rather than it being a separate order for each one. However, running over the order spend in my head, I could have achieved the same number of D-charges placed and detonated by using my orders in a slightly different way, so it didn't materially affect the result.

This was definitely a tough mission and game, with it really coming down to the last rolls of the dice. My learning points on this mission would be to be more aggressive with Forward Observing earlier on and to bring more options for destroying the antennas once the observing is done - D charges are incredibly order intensive!
Posted by The Responsible One at 21:16 No comments: