(Not so) pretty pictures

I spend a lot of time reading other people's blogs and social media. This last weekend, I decided to read back over some of what I've written on this blog, with an eye to improving it.

Now, I may have mentioned this before, but there really aren't enough pictures on this blog. It's pretty text heavy, without enough visual eye candy. I quite like the work Goatboy does over on his blog, "Full of Monkey", which has a pretty standard formula; clever picture from the internet, some random thoughts, a test army list and then pictures of the models he's got done that week. Sadly, I am nowhere near as prolific a painter or gamer as he is, but also wouldn't want to be copying that set up exactly.

Also, one of my major projects at the moment remains clearing up the study so my wife will let me have the 6th Edition rule book. And really, you aren't reading my gaming blog for pictures of my cleaning progress. If you wanted pictures of people's cleaning progress, you'd be reading "Unfuck your Habitat".

I just lost ten minutes to reading the UyH tumblr. I'm starting to see why I don't get anything done around here.

I also realised, while entering a competition run by Joeyberry (on Youtube and Facebook - one link isn't enough for some people!) that I don't have many good pictures of my Guardsmen!


Interestingly, that photo does not include one of my squads. The reason for this is that they are converted from Lord of the Rings Haradrim, and while I'm allowed to do that and play with them, GW aren't allowed to put any pictures of them anywhere. This is actually fair - the mixing of the two genres is a serious dilution of the franchises, and commercially there couldn't be any other decision made.

Anyhow, I took some time yesterday to see what photos I actually have. I have deleted an awful lot of rubbish that would never see use, but have found that while I have a small stock of photos that are usable-ish, there are some serious downsides to what I do have.

My gaming board is unpainted blocks of MDF, which means my desert force blends in a little _too_ well! Still, it serves reasonably well as an actual gaming table, but I should get around to actually painting it!

This does mean, however, that I don't really have much in the way of a good backdrop for my models - they invariably end up having shots taken on whichever desk I have set up as my painting / modelling space that day. 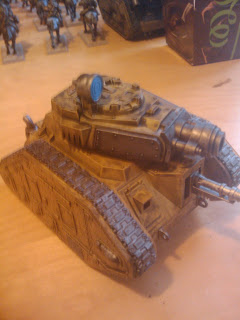 Model shots aren't too bad, but I do realise that some blurry out of focus shots of a few of my other models in the background and a container from a soy chocolate pudding in the background aren't the best medium for that sort of thing.

I will be going to Games Day next weekend. I will not have a new camera before then - I'm getting a new phone after 28 September, which is just bad timing. Still, its free with my contract, so I suppose I can't complain.

Posted by The Responsible One at 14:38