Slow and steady wins the race

I'm plodding away, getting little bits and bobs done. A lot of work continues to be assembly. Seeing pictures of unpainted models with mould lines removed is not the most interesting thing in the world, so I'm trying to minimise that sort of thing. 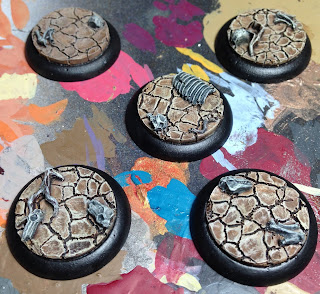 Here's a finished thing, though. Some Micro Art Studios bases that I'm going to use for Malifaux Scheme Markers for Turf War and Squatter's Rights. It's a simple base coat, wash and drybrush, but it's a job off the list, and they look quite nice, I think. 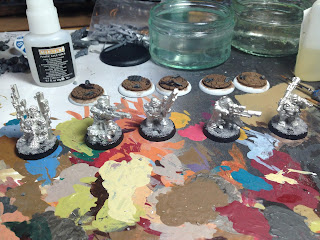 Here's some Ratlings a good friend of mine assembled for me. I just added some rocks and texture to the bases before getting them undercoated. They're going away in a box for now, though. I've already got a pretty good chunk of 40K stuff painted through commission painters that haven't seen a battlefield yet.

I've definitely drifted from playing 40K recently. I still love the background and setting, and like coming up with 40K ideas. I'm not sure what's causing the malaise. Is it that my current Astra Militarum force is a bit dated in terms of army selection, so struggles a bit compared to more recent codices? Is it a weak codex at the moment? Is it that I'm a bit over Guard and totally want Ad Mech, Skitarii, Inquisition and a variety of Armies of the Imperium in a glorious Rogue Trader-esque mish-mash that's totally legal this edition? I'm not really sure just yet. 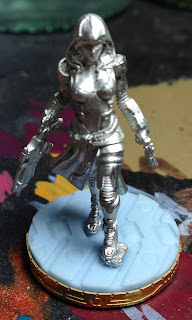 I've been pretty quiet on Infinity recently, but my darling wife has been helping me out with my appalling pinning. I've been doing it by hand and that's meant I've just not made the holes deep enough, and things are pretty fragile.

We started off with rebasing the already assembled stuff. The Reverend Healer here shows the plan - Antenocitis Workshop bases and brass fire arc indicators. They're pretty swish! But I tease Infinity and then it's going to go quiet again...

I'm busy for a whole bunch of weekends now - the 40K Open Day, a painting class, and a LARP (with all requisite prep) - and that's when my wife was helping with stuff. So I'll be plugging away at my own projects and getting stuff ready for the bits she's helping me with, but Infinity won't see much more air until mid November at the earliest!

Posted by The Responsible One at 20:24

Email ThisBlogThis!Share to TwitterShare to FacebookShare to Pinterest
Labels: Astra Militarum, Infinity, Malifaux, Painting, This week, to do