At the weekend, I went to a painting class held by Siege Studios at Wayland Games. This was the first time Siege had run a course, so there were a few minor teething issues, but nothing that can't be fixed for the second time around. I'm told they're already planning another event, so if this sounds good, keep your ears open. 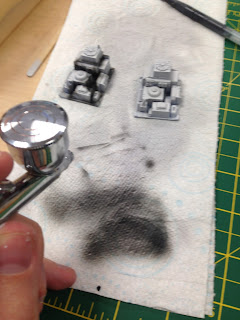 First item on the agenda was some airbrush tutorials and pre-shading. There was a wide range of skills and experience in the class, but it was a small group and there were plenty of instructors to go around. They would demo something, then you'd try it out yourself. 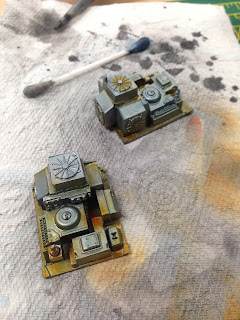 I practice on some generators I'm planning on using as scatter terrain for things like Infinity. This is the base coat stage, and I intended to come back to them in later parts of the class. 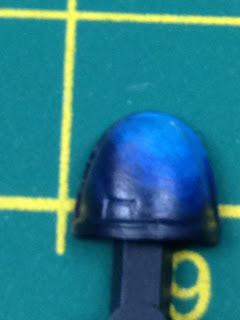 We then moved on to blending, which I've done before but am pretty out of practice on. I was pretty pleased with this, but think with a bit more practice I can definitely do better. Do bear in mind that this is my progress during the course. Some other folk with more experience were putting out some absolutely stunning work as a result of the lessons they got over the weekend. 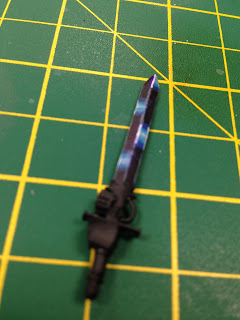 We then went on to power weapon effects. Mine doesn't look great, but there were two reasons behind this - one is that my blending is pretty darned slow right now, so I wanted to get the hang of putting paint in the right places in the time available. The other is that it turns out that the brushes I have, while pretty good, aren't up to some of the tasks we were being set, so it's time to order myself some new brushes! 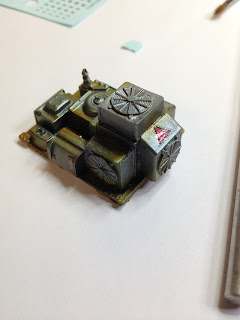 At the end of day one we did transfers. The generators were returned to for this! 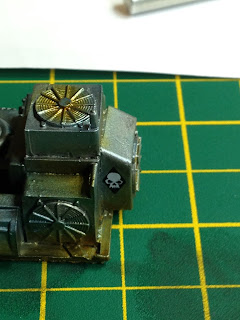 We were using Micro Sol and Micro Set to make the transfers blend in, and I was super pleased with how they turned out in the end - not much gloss at all and hardly any visible edge. I have already ordered things off the internet to practice with! 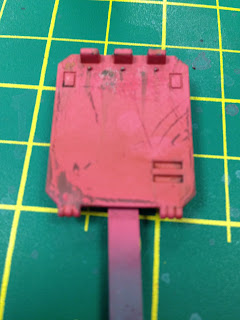 Day 2 started with weathering. They showed us two techniques. I'd already done some work with the hand painted scratches and sponge weathering, so decided to try out the hairspray technique. This was the result. I made some definite mistakes in doing the process, but I also know where I went wrong and learned how to cover them up! I'm looking forward to trying this out on a model at some point. 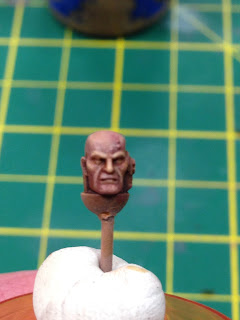 Faces, faces, faces. I have done faces before. This one turned out pretty well. I want to try some more faces with different colours and a better paint brush. I don't think I learned anything specific new here in terms of techniques, but I got good feedback and critique, which I appreciated. I also learned other ways of doing the same things I've already done before, which is a good tool to add to the arsenal.


We finished up with some topics of our choice and one on one tuition. There was a bit of a basing demo, but I didn't try anything of that ilk myself - but I will be. Oh, I will be! I am full of ideas and brimming with enthusiasm. Tiredness, too, but mostly enthusiasm! 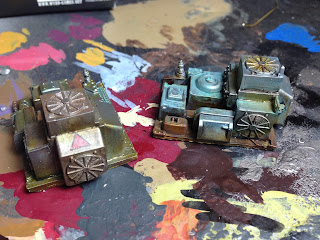 In a few of the gaps and the personal painting time, I finished up the generators, playing around with a few more weathering techniques. This isn't the greatest photo, but I'm really happy with how the transfers came out. I think I'd probably put something in to bring the Verdigris down on the right hand one a bit if it was an army piece, but as scenery, I'm going to call these two done.

Posted by The Responsible One at 19:32