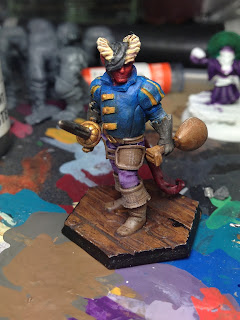 I've finally finished painting up the figure for my Tiefling Bard, Myth. To get him finished, I basically worked from top to bottom to get things finished off. I dropped in a wash on his trousers to give them a bit more contrast, then cleaned up all the leather patches, washed and drybrushed them to get them back to where they were before the trouser colour swap.

I dropped in a darker blue at the base of the jacket to give it much more contrast, and changed the colour of his gloves. I added gold buttons to the jacket, dropped a light sepia wash onto the puffed sleeves, lightened some areas of the face, and dropped in dark brown lines into his horns to improve contrast. 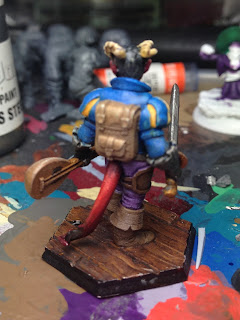 His tail had also been a bit too plain, so I brought it right up with a much lighter red. The lute also had a bit more tinkering and dry brushing to make it seem a little less shiny. Each individual thing was only a little thing, but I felt it really brought the miniature detail forward and made him feel finished. 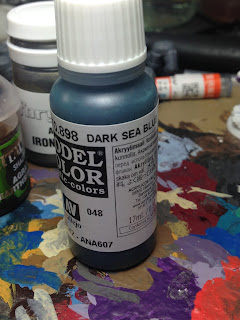 I was trying out a couple of new colours in this last paint session. The first was Vallejo Model Color "Dark Sea Blue". I picked it up on a whim after hearing someone on a podcast (I can't recall which one) say it was one of their 'go to' colours. I made a note of it at the time, and ages later have picked up some to play with.

I did find it needed a ton of shaking to actually make it mix - the first few drops I got out were clearly separated and worse than a wash consistency. It was far more than GW paints need, but I quite liked the colour. It has a dark blue green to it that I like. 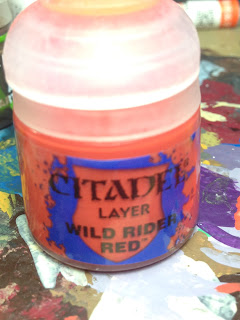 I've also been trying to get out of my "everything is dark" painting habits, so grabbed this 'red' from GW. It's closer to a flourescent orange, really, but when blended over a darker red, really makes it pop. I used another red as a transition between the very dark red and this so the change wasn't too stark, but if you look at the tail in particular, it gives a lovely effect.

All in all, I'm pleased with both experiments. I'd recommend trying new paints or colours - or even colours in combinations you wouldn't usually consider. Pushing out of your comfort zone really helps you improve your painting.

Also, I got through the post without telling you about my character. You're welcome, internet.
Posted by The Responsible One at 20:25

Email ThisBlogThis!Share to TwitterShare to FacebookShare to Pinterest
Labels: D&D, Painting, This week, to do