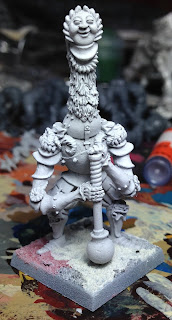 So, I took advantage of the Bank Holiday to settle down to some serious assembly. And yes, I did work on more than four figures, but there's a bunch of other ones that are 'nearly done' so will have to wait for another post.

First up are some models from the Circle of Chaos Kickstarter. These arrived recently, and I'm trying to get things assembled and undercoated ready for paint as they come in now, rather than leaving them in boxes forever. 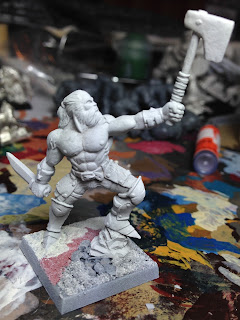 The long necked chap will be added to my slowly growing Chaos force, probably just as a rank and file warrior. This barbarian type will also be joining some thugs or marauders, depending on what else I find to go with him. 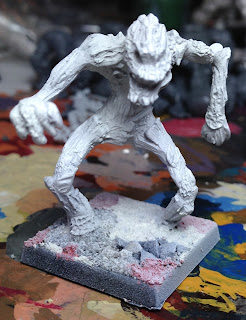 This weird chap, however, I have no real idea what to do with. I'll probably just keep him as a random model for use in AoS, or get inspired randomly at some point. 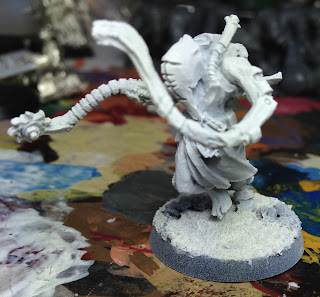 Another Arco Flagellant also got finished off. He'll join the pile of "prospective Inquisitorial Warband members" until I get some Inquisitors done and inspired for colour schemes...

Also coming up on the assembly table are finally getting the first five of the Chaos Forsaken ready for paint, a couple of strange wizards for a very particular Age of Sigmar hobby project, and another Chaos Warrior from a small manufacturer. Oh, and the rest of the Circle of Chaos figures, of course! It may be a while before you see them, as I have a few other blog post ideas in my head as well, but they'll be getting worked on while you see the last of the WarhammerFest content, and a few other musings...
Posted by The Responsible One at 17:55

Email ThisBlogThis!Share to TwitterShare to FacebookShare to Pinterest
Labels: Age of Sigmar, Circle of Chaos, Finecast, Inquisition, This week, to do, Warhammer Fantasy Battle, Warriors of Chaos