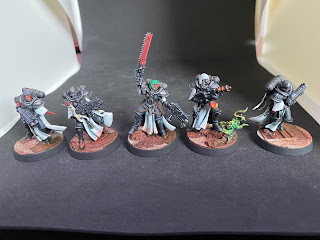 A while back I commissioned Squiggle's Studio to paint up all the Sisters of Battle I had lying around. They're now back and I'm looking forward to trying a game with them once it's safe to do so. 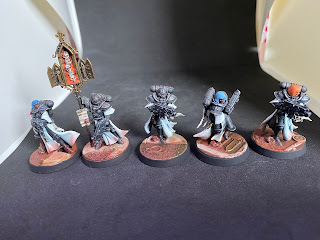 The core of it was the Sisters of Battle Army box that they did when they released the new plastics. I asked for them to be painted in the colours of the Ebon Chalice so my Future Narrative Plans (TM) of a force running around the underhives of Terra make sense. 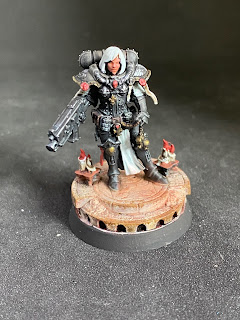 I asked Mike from Squiggle's Studio to base the paint scheme on a tutorial by Secrets of the Void. It wasn't a painting technique he'd used before. He seemed to have fun with it, though. 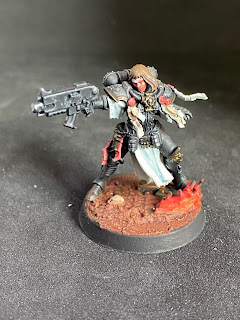 There were a couple of limited figures GW had done that I got done as well. I need to look at the new Codex when it comes out to work out if I'll use them as squad leaders or as Palatines. I might be tempted in future to come back to these later and maybe detail up the faces a little more on some of the characters. There's nothing wrong with what Mike's done, for reference. I just have that little voice in my head saying I should tweak things ever so slightly. Bad control freak inner voice! No biscuit! 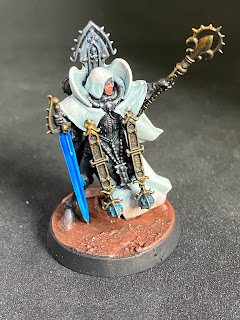 This is the canoness from the Sisters Army box - one of three canonesses I got painted. There's more models than I can fit into one blog post, so they'll go up in future weeks. 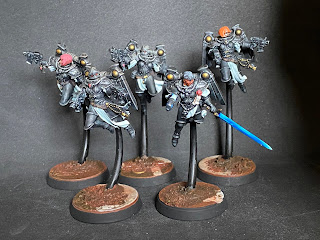 Here's the Seraphim. I don't know how good the jumpy girls are in the current edition, but I guess I'll need to get a game in to find out . . .
Posted by The Responsible One at 19:00