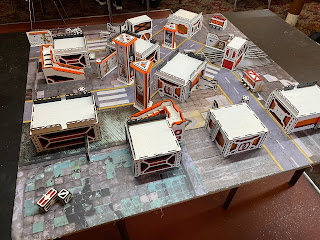 As I mentioned last week, I went down to Bethnal Green Working Men's Club for a Sunday club session to take part in our Meatspace League. Hackney Area Tabletop Enthusiasts are requiring advanced bookings to limit numbers and allow social distancing, and it is absolutely required to wear a mask while moving around the building.
I got there super early because of nerves about travelling, but it meant I could get out the scenery and set up a table. 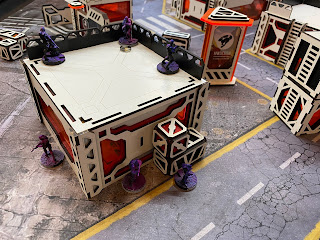 My opponent was bringing Merovingia, and the League called for the mission Annihilation. I won the Lieutenant roll and chose to go first. Dahshat Company is "pretty aggressive" as a faction, and I wanted to cause as much damage as possible early on. For defence, I had a core fireteam of Ghulams with a couple of snipers. The Bounty Hunter sniper rolled Mimetism -6 which moved the team from "good" to "oppressive". 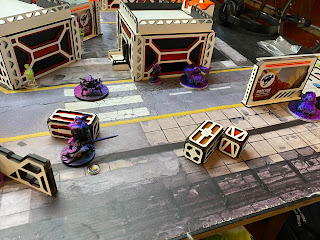 The right flank had the Rui Shi and McMurrough. I was really worried about Margot and Duroc walking in from the side or my deployment edge, so did my best to cover their possible approach edges as best possible. 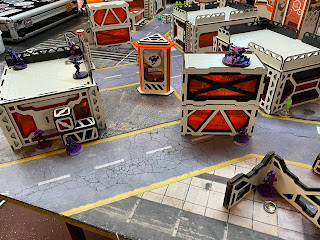 I also had a Total Reaction remote up on some shipping containers. I've taken to having more ARO pieces over the lockdowns, and it's served me pretty well so far. The advantage of the Reaction remote is that it still has a Heavy Machine Gun so could go on a late game attack run if it needs to. My hold back models were the Maghariba Guard and a Rafiq FTO in a Fireteam: Duo. 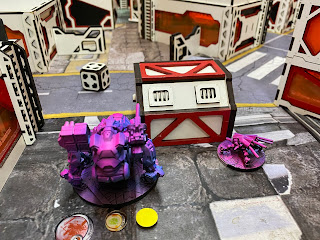 I pushed the Maghariba Guard up the table and shot everything I saw. I took out four or five models on the way. He ended on my opponent's half on the table in suppression fire for the inevitable counter attack. 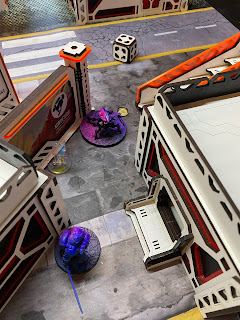 On the right, I pushed the Rui Shi up and dropped it into suppression fire to be yet another problem for my opponent. 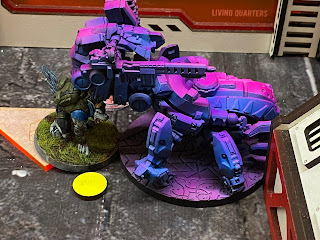 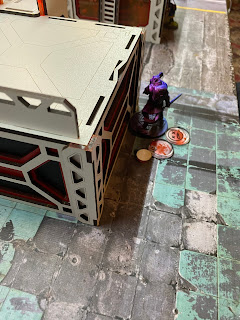 McMurrough went on a killing spree, killing a decoy who was hiding like they were a Lieutenant, and most of the rest of the Ariadnan Link team. Eventually his luck ran out and he got taken out by the 112 Doctor. 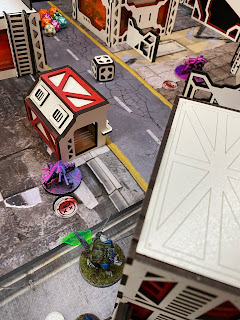 The Rui Shi moved around and managed to take out Duroc, but the return fire took it out in turn. 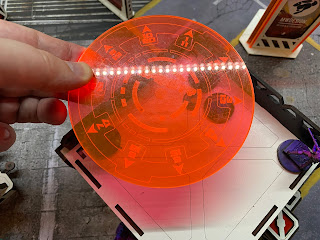 Margot managed to get in range of my link leader and Lieutenant and dropped several speculative fire grenades onto him. Despite the early damage from the Maghariba Guard, we were tied on casualties and surviving points, meaning that the Lieutenant kill swung the game for the French.
My initial thoughts from this game is that it's more to do with how I played the mission. I think Annihilation may benefit a cagier, more defensive play to try and keep more of your forces alive. Having a reliable solution to "Lieutenant on a rooftop" is pretty vital, as those are relatively easy points to pick up in many cases.
It was good to get back into games in person, and it gave me plenty of tactical thoughts to chew over for future games.
Posted by The Responsible One at 19:00