I have just realised how behind I am on my battle reports. I have three queued up to go, and I'm planning to go fight another battle tomorrow at Dark Sphere's 40K night (I'm writing this on a Tuesday evening).

This is from a battle I had against Chaos Space Marines with Traitor Guard allies. We had rolled up Big Guns Never Tire. I was experimenting with taking the brave and noble Captain Al'Rahem. My list was pretty standard for me, with a big platoon, some veterans, a couple of Leman Russ tanks and a Valkyrie.

The other player had a few squads of Chaos Marines, a flying demon Prince, some Chaos Terminators and a Defiler. He then had an allied psyker, veteran squad and a Valkyrie.

The early battle involved me being beaten brutally about the head by the demon prince - murdering my command HQ to death, in particular. 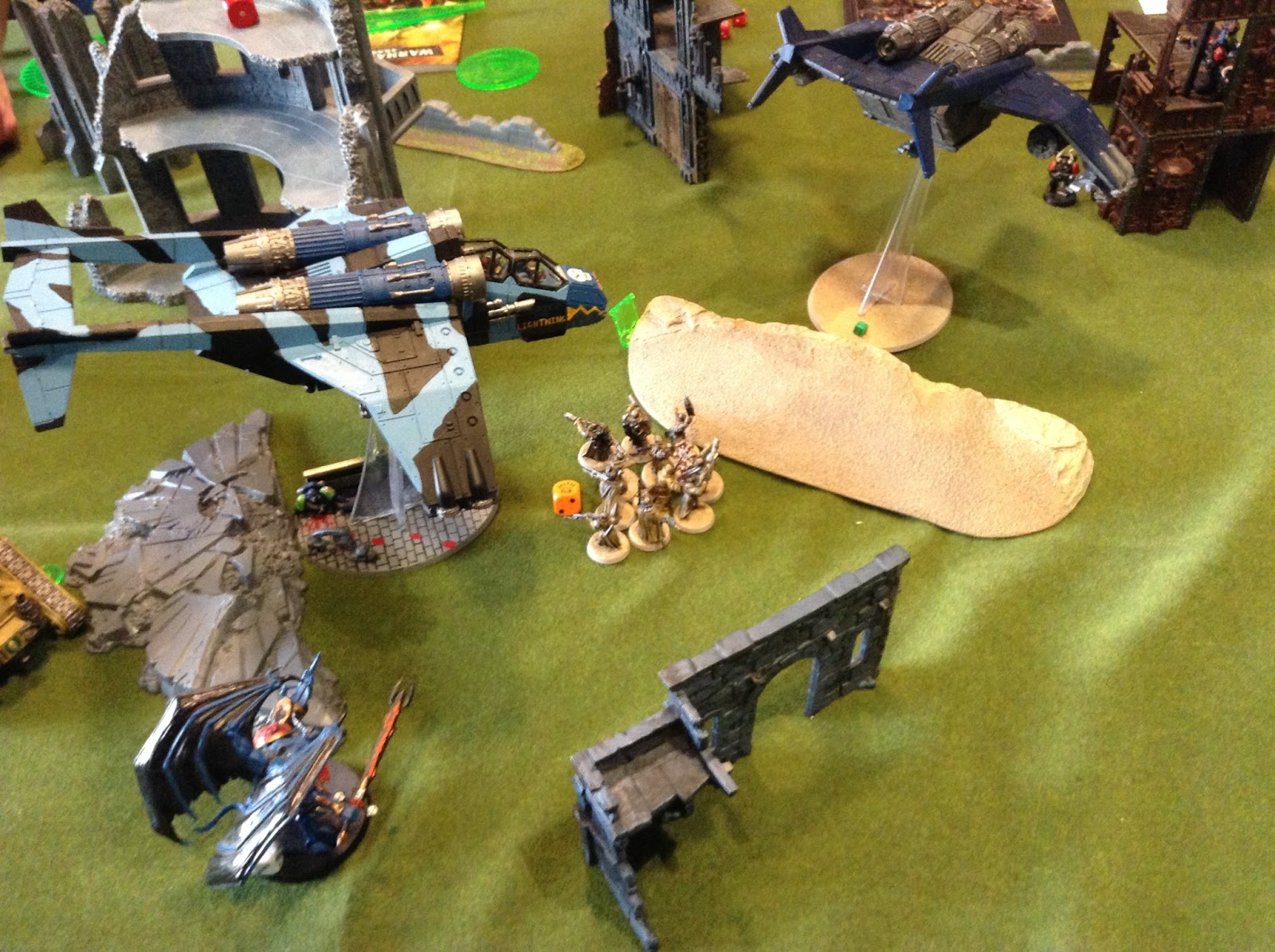 In the centre, my Veterans jump out of the back of a Valkyrie and murder to death a Chaos Marine squad holding one of the objectives. His Valkyrie, having dropped off his Guardsmen, starts pursuing mine with the aim of shooting it down. 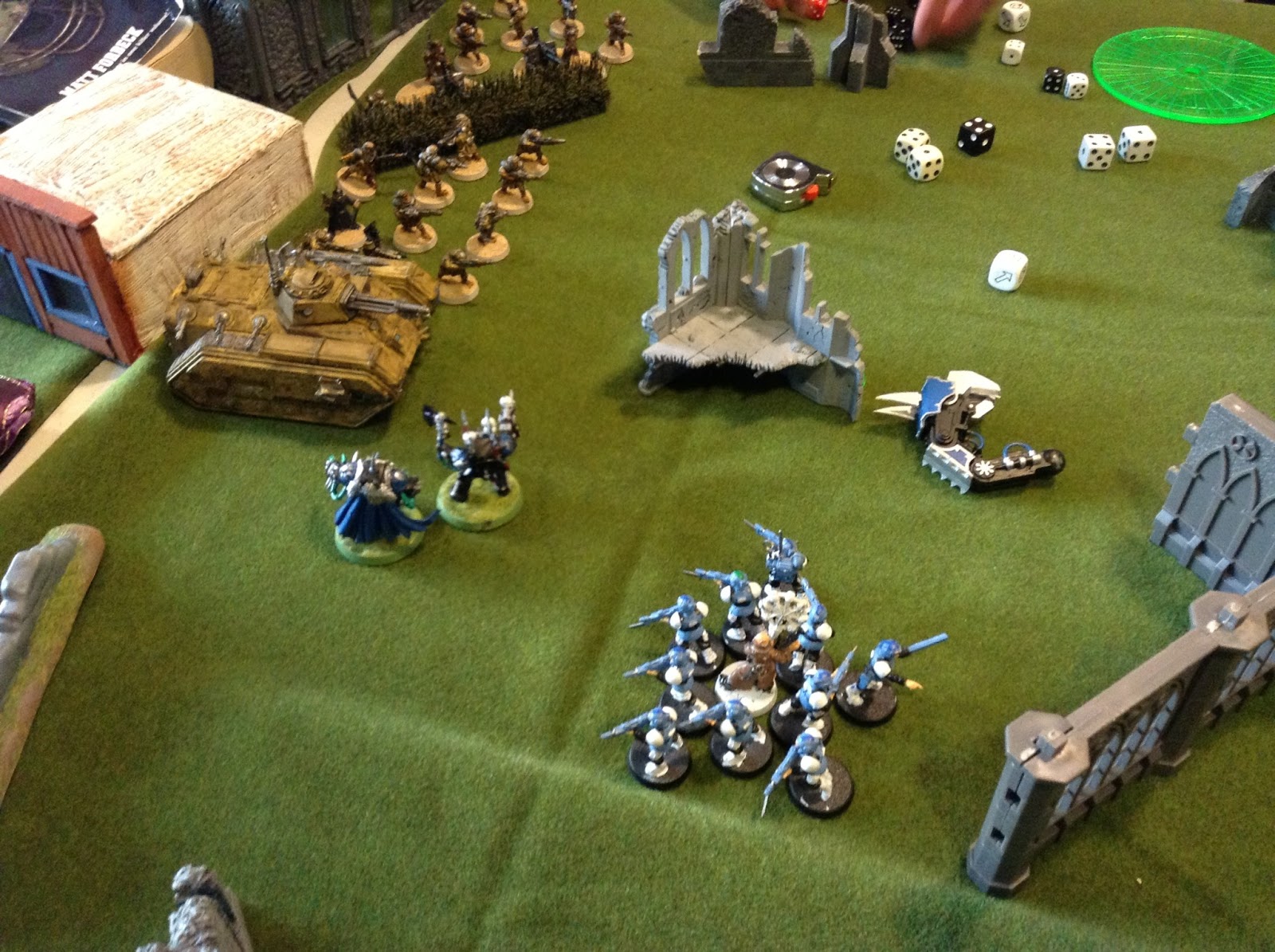 Al'Rahem and his platoon rock up from outflank and between them and a Demolisher, turn the Defiler to a small smoking crater. 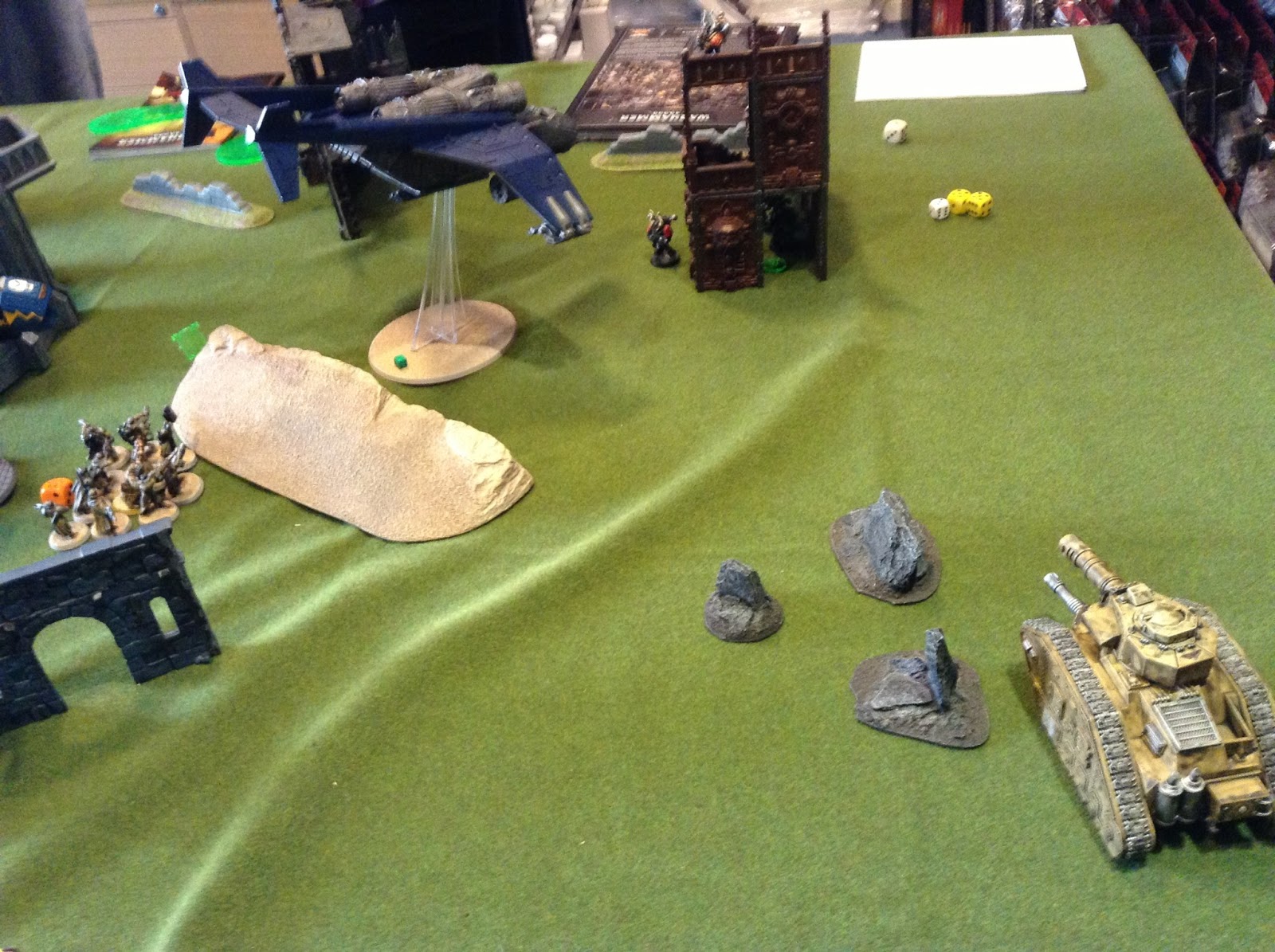 On the right flank, a Leman Russ encourages his Marines to stay in cover and do very little. 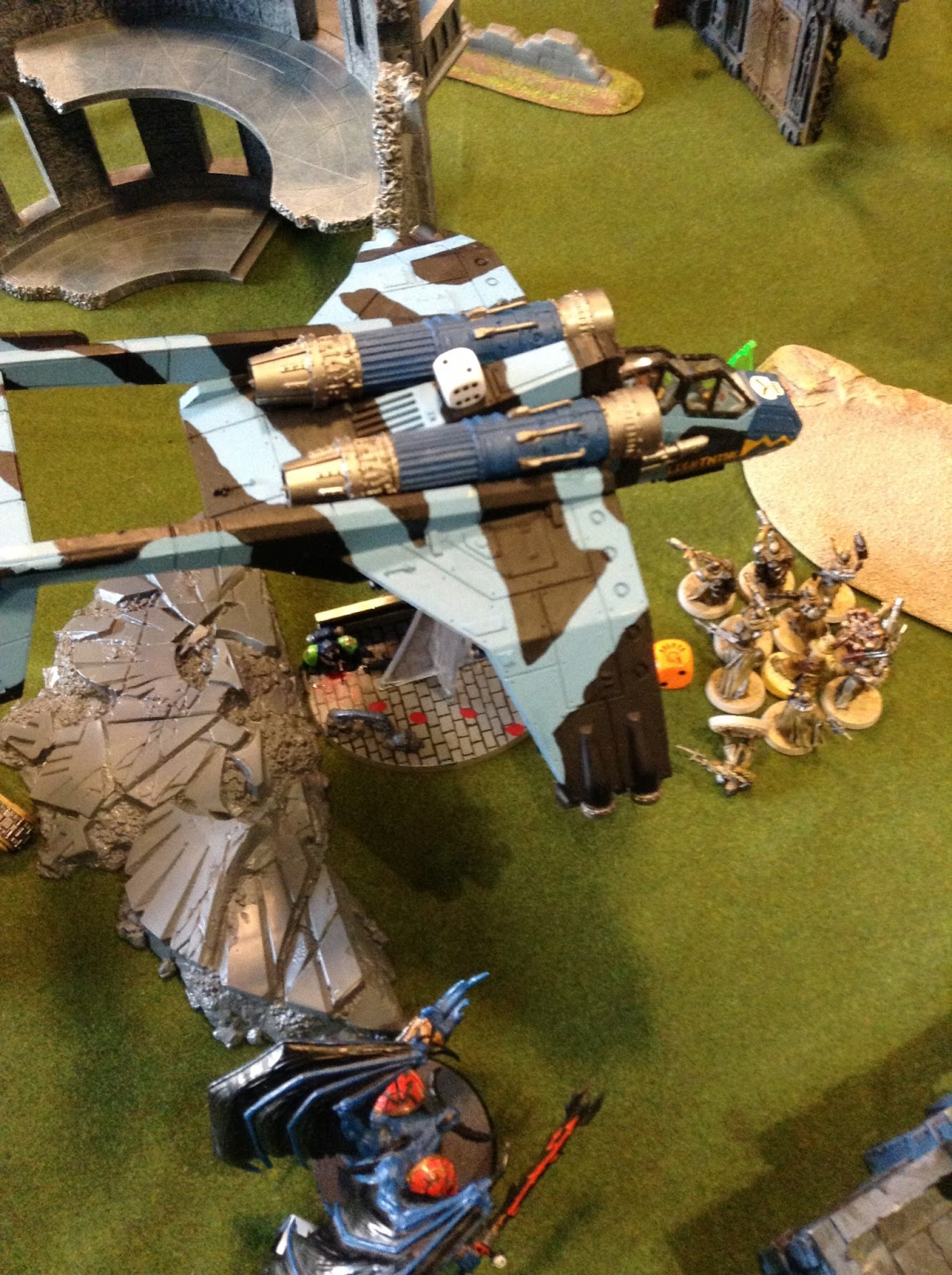 It then all got a bit frantic on the left flank. Al'Rahem's squad got out of the Chimera, successfully used Like the Wind and melta gunned the Terminators to death before ducking back behind their Chimera. The infantry platoon caught the Traitor veterans in the open and gunned them down 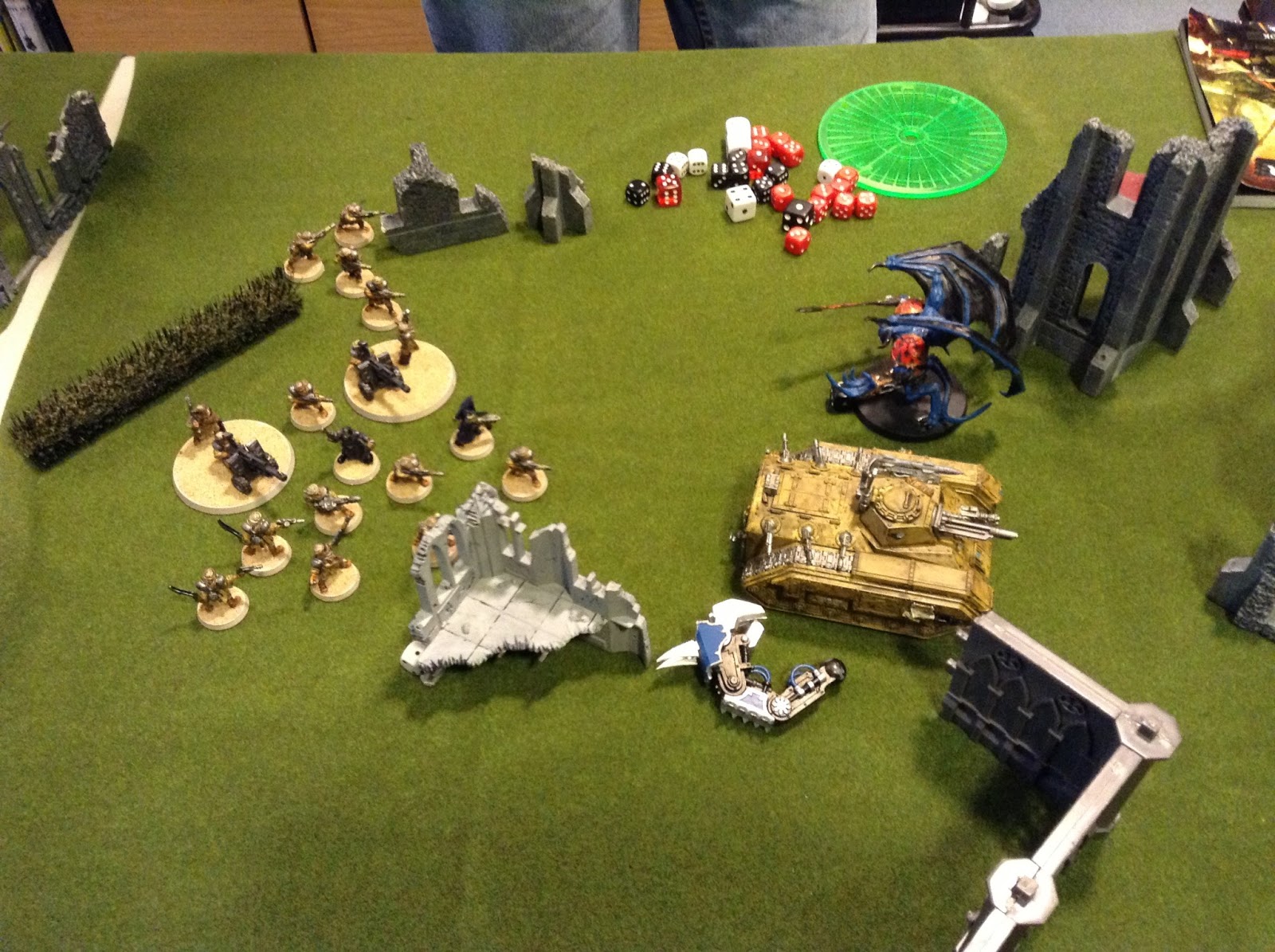 The flying demon prince swept across the table in an attempt to deal with the mass of guardsmen bearing down on his flank. 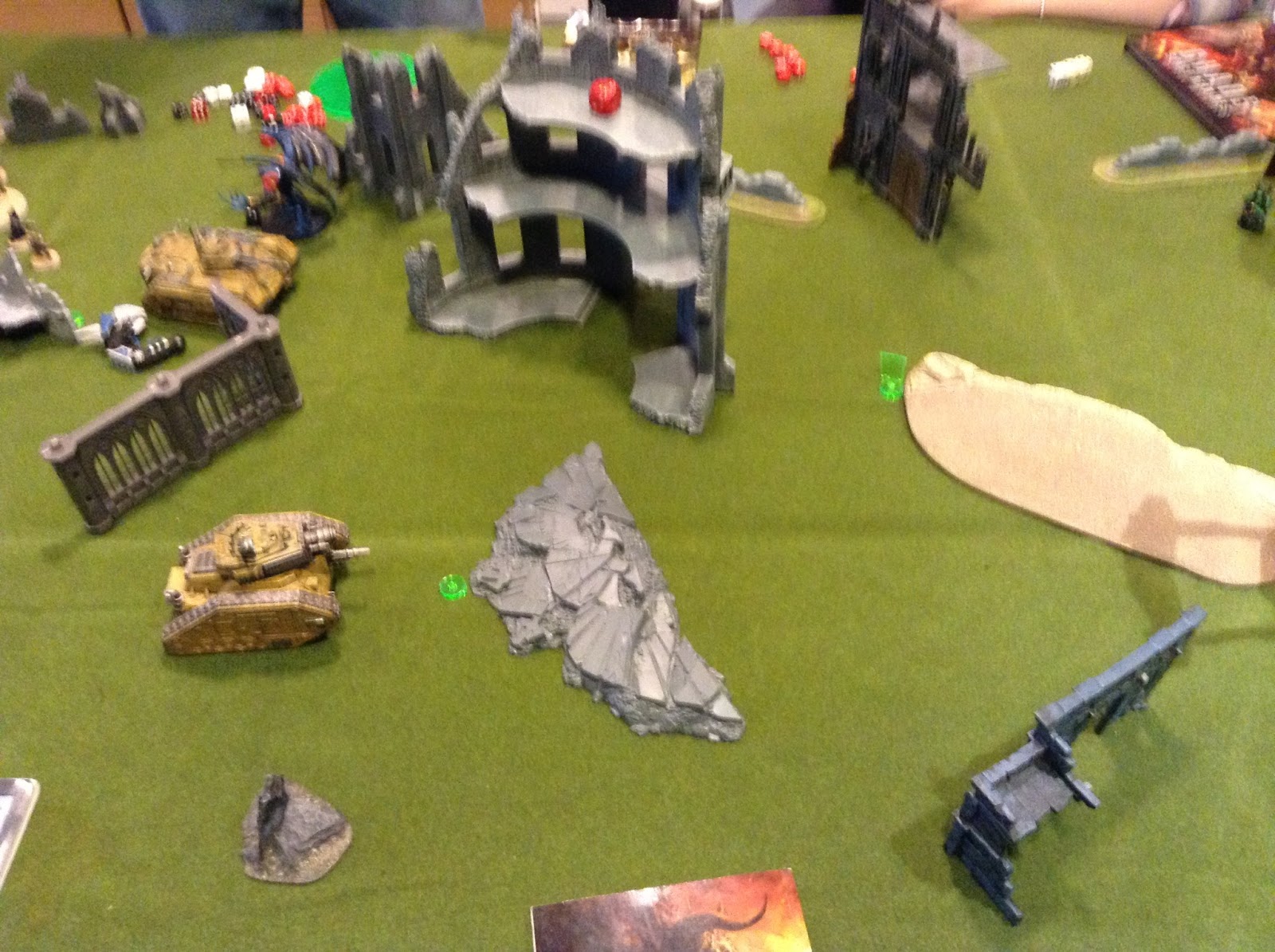 A slightly blurry shot shows my Demolisher trying very hard to be inconspicuous away from the demon prince. 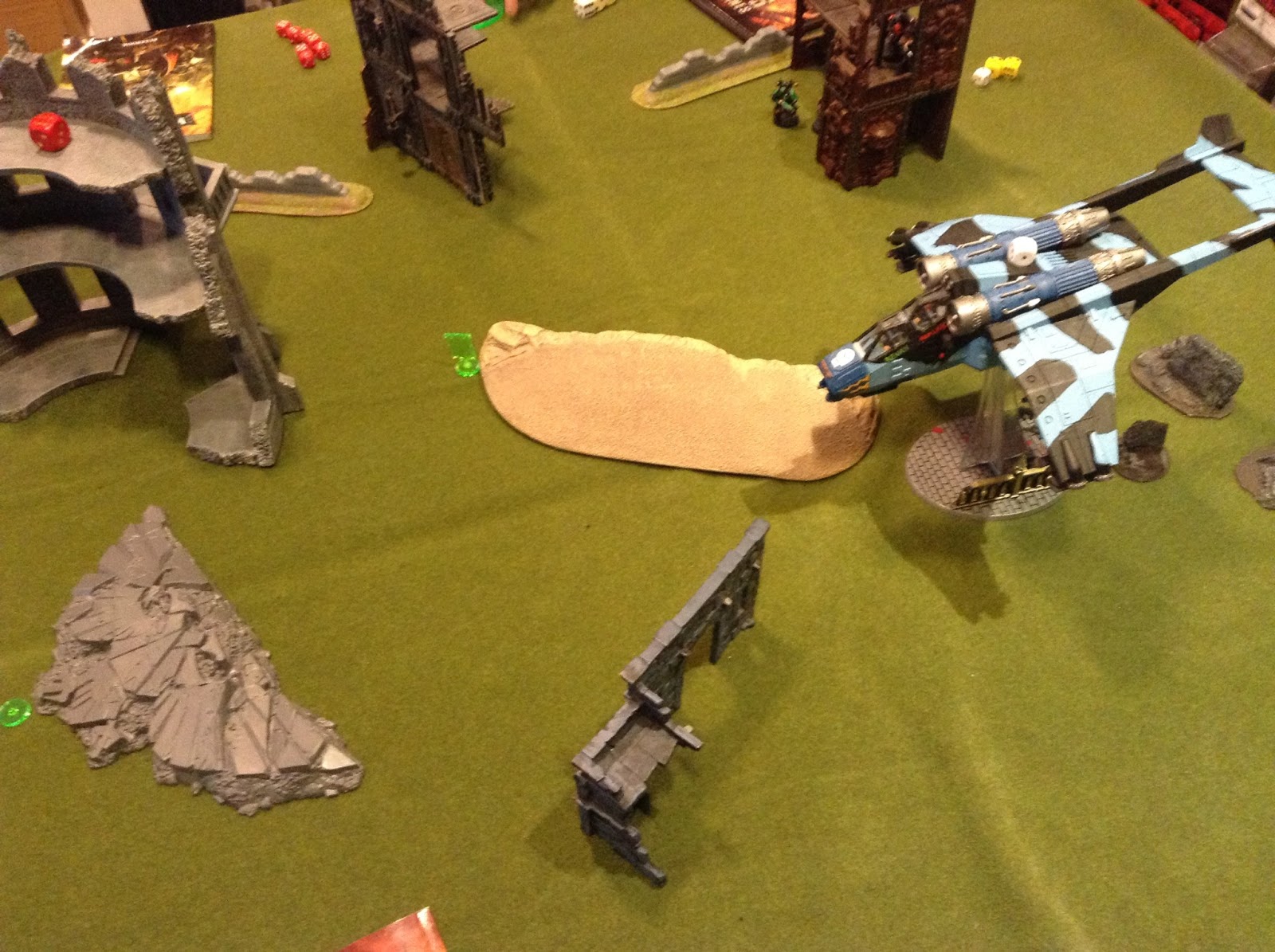 His Valkyrie went into hover mode in a desperate attempt to deal with the Demolisher a little too late (it survived the game, remarkably, although it was immobilised)... 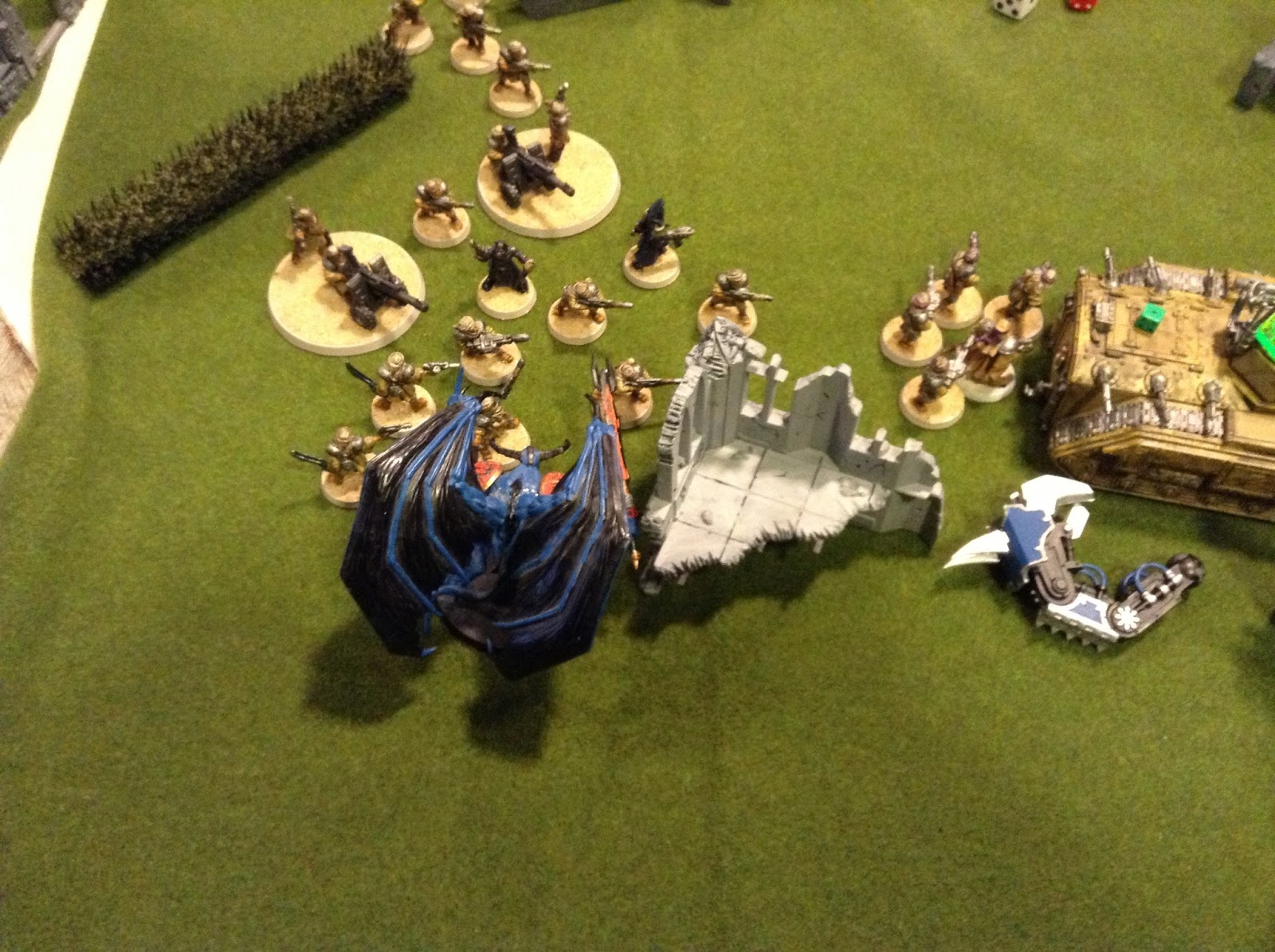 The demon Prince managed to destroy the Chimera, and shortly after this last shot was taken, cut down Al'Rahem and his squad - I don't recall if it made it through the game in the end, but I was holding enough objectives to scrape a win!

This was my first introduction to flying psychic monstrous creatures, but it was not to be my last. They are incredibly dangerous this edition, and are now making my list of "things a list needs to be able to deal with".
Posted by The Responsible One at 19:00