Did I dream it? A Chaos Space Marine list with Mutilators 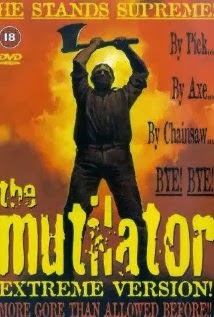 Somewhere, recently, I saw or heard an argument that the Mutilators in the Chaos Space Marine list were a better bodyguard for a Chaos Space Marine Terminator Lord in a Land Raider than Chaos Terminators, as they had more wounds and more flexibility to punch a variety of different opponents in the face in close combat.

I have now totally forgotten where I heard this. Was it a podcast? Was it in a blog post somewhere? I don't remember. Maybe I dreamt it. I shall award one Internet Point if anyone can link to my inspiration for this craziness.

So, I had a first pass at putting this into a list today.

I will certainly say that as a Guard player, the idea of that few models on the table is a little scary. I went with Slaanesh and a big horde of CSMs because I am currently considering doing my Dark Vengeance models up as Slaanesh worshipping Iron Warriors, who grew bored during sieges and found ways of entertaining themselves during all the dull bits.

Only two scoring units, with two tanks and a horde of Marines starting on the table is really not very much at all - I did consider trimming down to a more 'multiple small units' approach with Rhinos to increase the number of targets the opponent has to deal with and to allow the capture of multiple objectives - but I decided against it for this draft.

The Heldrake, obviously, reserves. The characters and the Mutilators charge forward at the enemy in the Land Raider and get out to murder things dead. The Noise Marines push forward in the Rhino and find an objective to push people off as they are a bit tougher than your usual choices. The 20 man squad either sits back or, if you're feeling brave, pushes up on foot looking for its own objective. Heldrake does as Heldrake pleases. Everything is Fearless or a vehicle.

If I was playing at 1750 or so, I think I'd just straight up add two Maulerfiends while cackling insanely.

I don't have any Chaos Space Marines painted up right now, so it's likely that this list will remain TheoryHammer for a long while yet. But it was an idea in my head, so I have written it down and put it on the internet to entertain others.
Posted by The Responsible One at 14:17