Painting wise, I'm very pleased to have finished painting the Marionettes who work with Collodi. I just need to finish the Wicked Dolls, then I'll start work on basing them all. 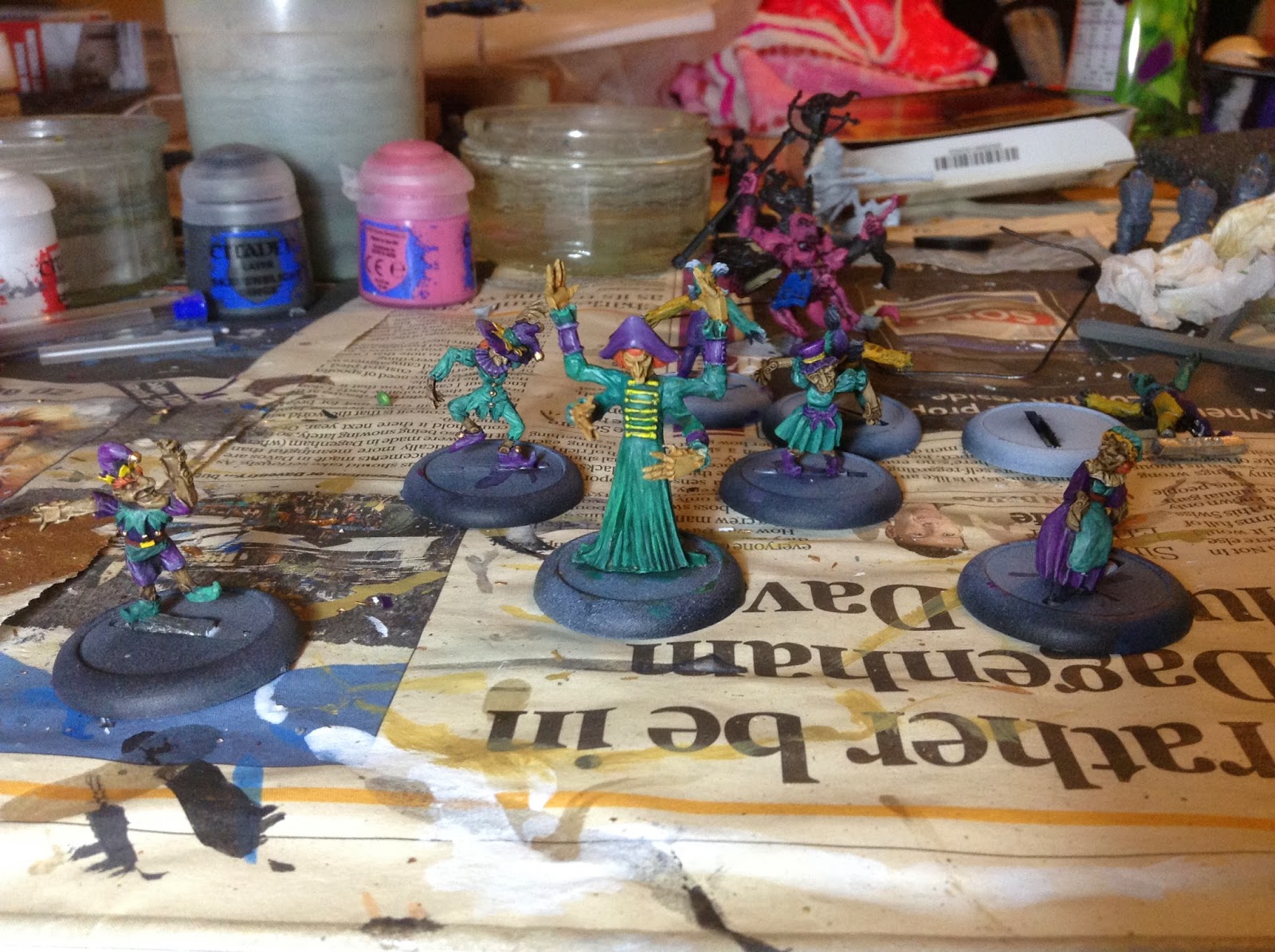 As you may be able to spot in the background, the Wicked Dolls are also progressing a little bit, although one had a horrific mould line that I'd missed, so he's been pulled off his base, had the mould line removed, and then re-undercoated. He should catch up with some base coat soon.

Finally, in the background, our errant little Herald finally has the first colours on him which aren't pink! That certainly feels like an achievement, and I hope to keep his progress creeping along, even if it isn't quick. Just doing a little bit on him every time I sit down to do something else seems to be working quite well. 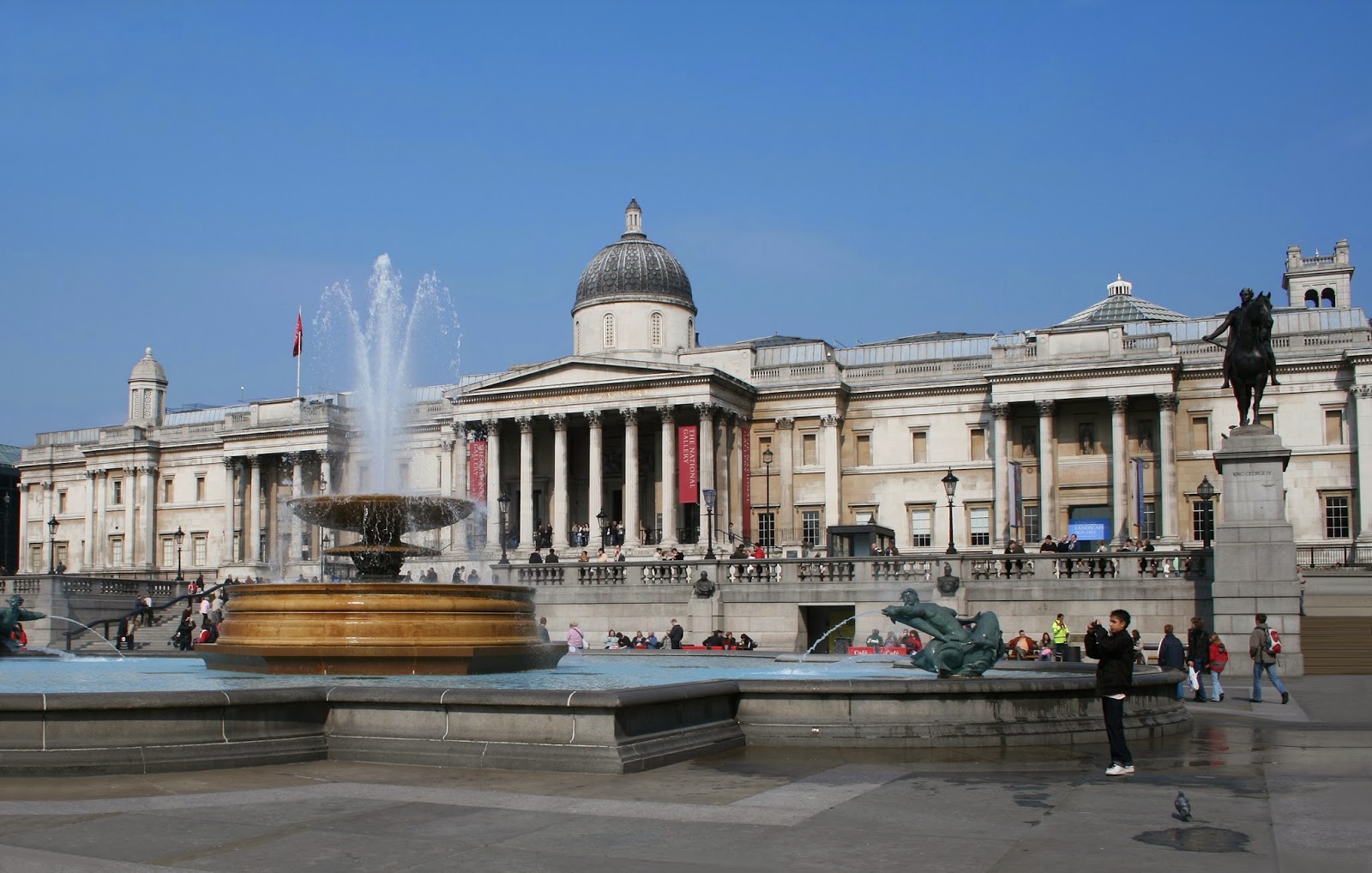 Today, I went to the National Gallery. It was not a hugely well planned trip - it was a rescheduled trip to meet up with a friend to go and see Sir John Soane's Museum, but we had not checked until recently to discover that, in fact, that museum is shut on a Monday.

During our wanderings, I noticed that the queue for Saints Alive, the Michael Landy exhibition, was quite short. So we dived in...

The exhibition is only on until 24 November 2013, and if you have any interest in art, I recommend going. Those with an interest in 40K should also consider going, as a lot of the work is a mix of Renaissance religious art and gears, injected with a wicked sense of humour. That should sound familiar to anyone who has more than a passing interest...

The donation box included a statue of St Francis, who smacked his head against a crucifix every time you gave money. There was also a "St Francis Lucky Dip" where you could win a T shirt. My companion did, and she was inordinately happy and excited about this. The irony was not lost on me...

This is Carlo Crivelli's painting of St Michael. It is interesting, but wouldn't really stand out to most wargamers. This is where Landy's genius has come in. His sculptures are based on collages of bits of Renaissance art, made into massive sculptures - most of which move, make massive amounts of noise, and eventually destroy themselves from people interacting with them. 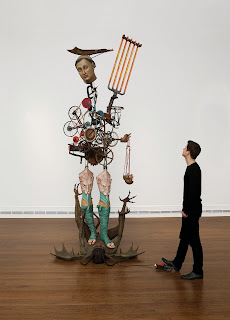 This is Multi-Saint. The legs are from the St Michael painting by Crivelli, as is the devil he's standing on. And this is where, suddenly, things come to life. You suddenly realise that the ornate turquoise armour with lion-faced knee pads is pure, unadulterated awesome. The photo doesn't do it justice. Landy has taken a painting and made a sculpture from it. I could entirely imagine and slightly more gothic version of these on a Dark Angel, or even Lion'el Jonson's armour when Forge World finally do him.

Landy has, in some ways, shown me a way - there is genuine inspiration which you could take from museums and paintings and put into your miniature painting. Miniature painting is artistic, and while it is not the sort of thing you expect to see at a gallery, outside of Warhammer World, perhaps there is inspiration to be taken from it?
Posted by The Responsible One at 19:50