The moment I saw the Optical Camo Markers that Warsenal produce, I knew I was going to pick some up at some point. When they made a post on their Facebook group saying that their current supplier of radiant acrylic was not going to be able to supply them and that their current stock would have to last until they found a new supplier, I went out and bought a set immediately. 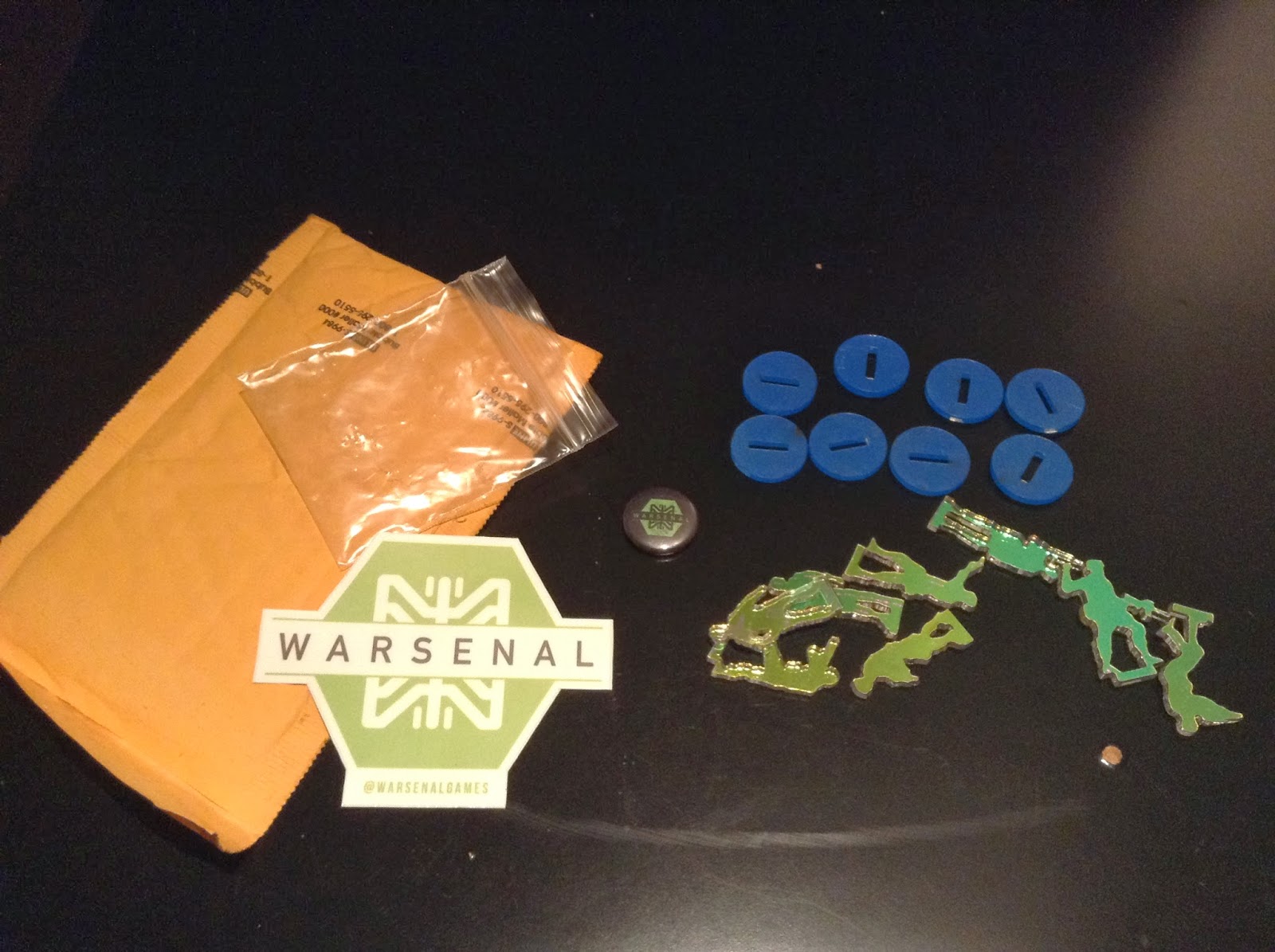 I was pleasantly surprised at how little time it took for the jiffy bag of things to arrive from the US. As a UK customer, I did have to pay more in postage than the relatively cheap price of the tokens, but I felt that the look of the tokens was worth the additional expense of the international shipping.

Warsenal also threw in a big sticker and a little pin badge, which is a nice touch. I am considering turning the sticker into a terrain bill board or something similar with a bit of weathering... 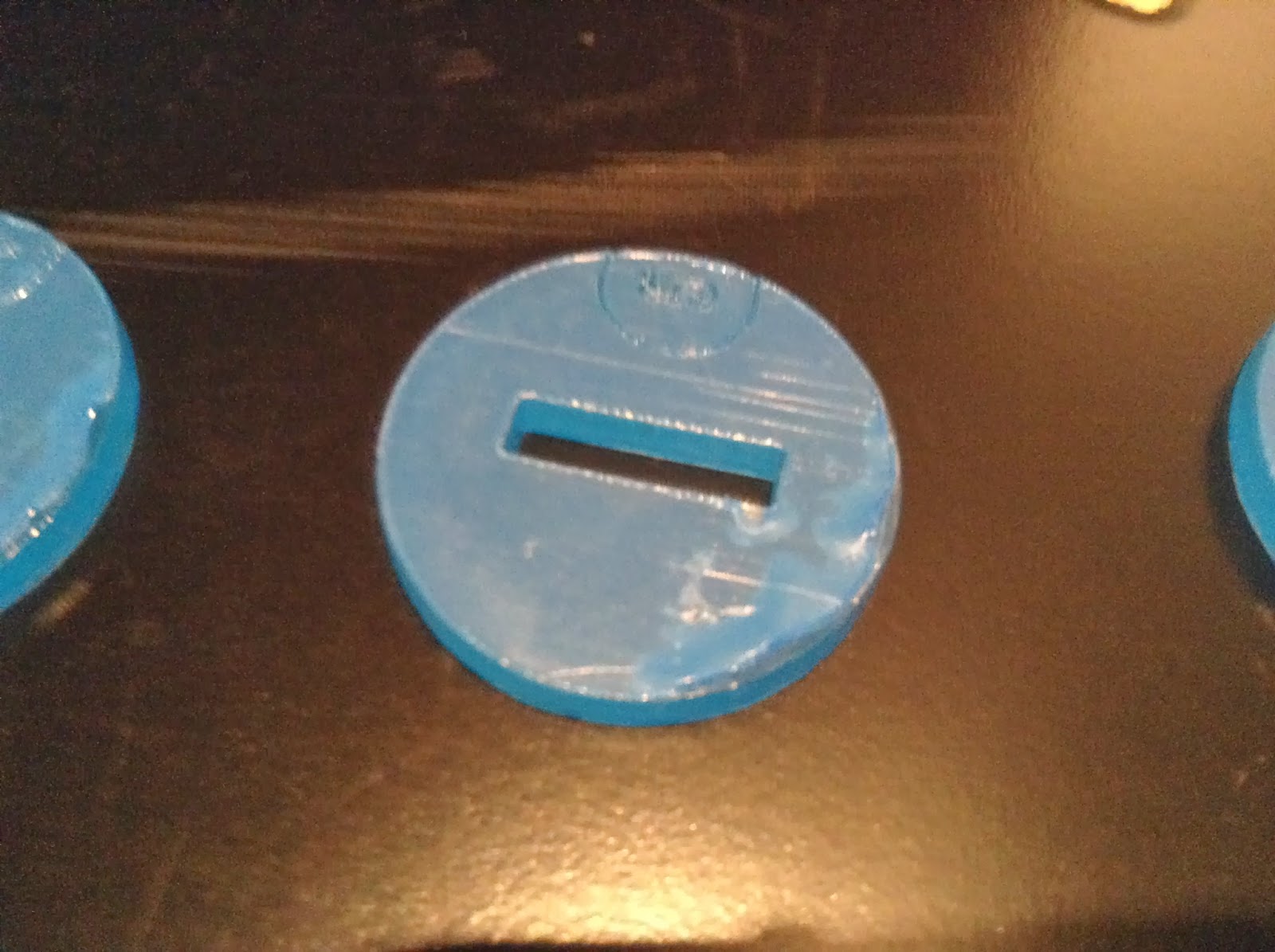 My first version of this post raised the quibble of the bubbled up coverings on the bases. Warsenal very helpfully and incredibly quickly pointed out that this is a protective covering for transit to stop scratching, and it just peels off. 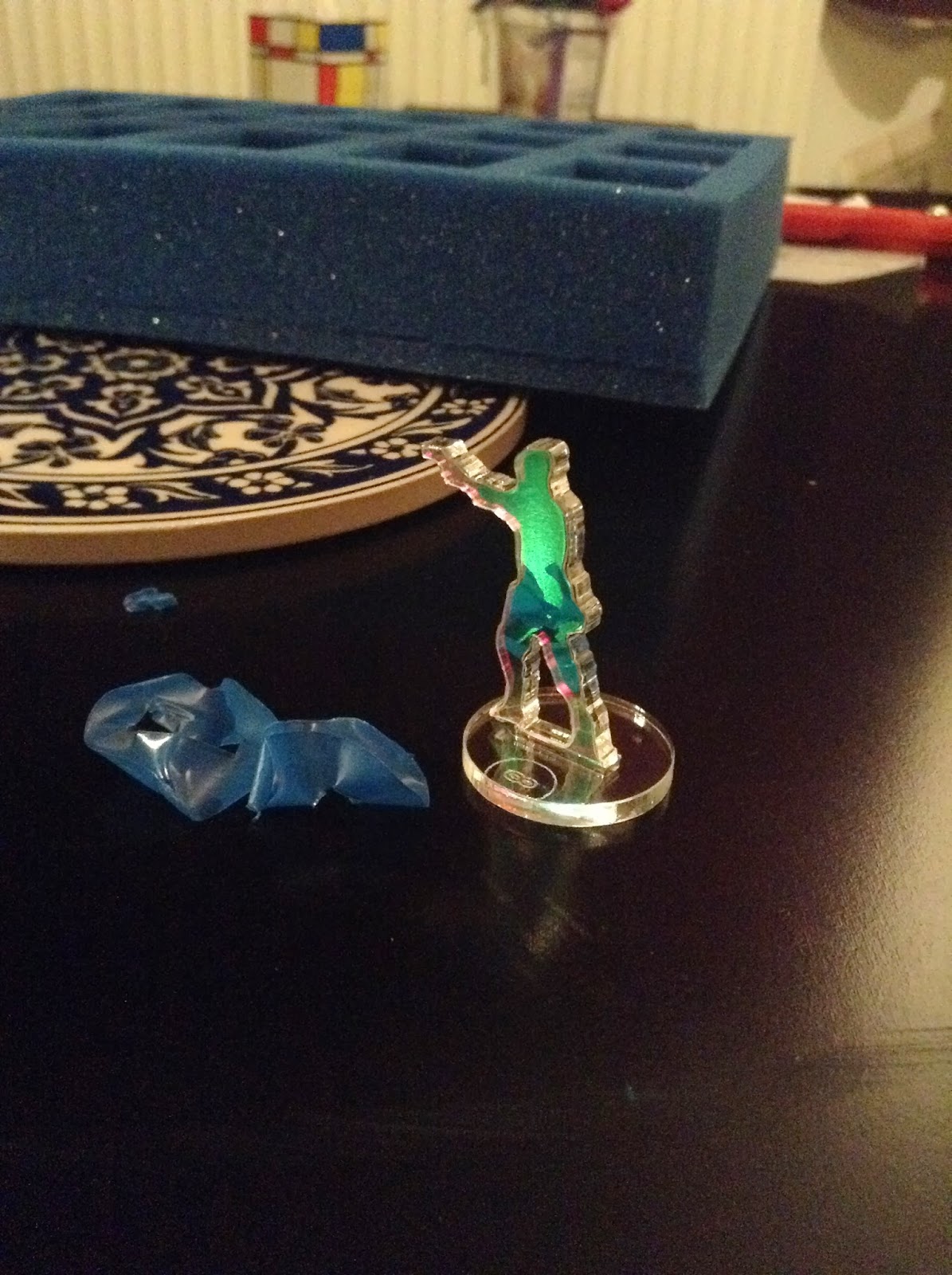 I ran downstairs and fixed one to take a photo. Doesn't he look even sexier now? The base numbers were a little unclear with the covering on (unsurprisingly), but now show up a lot better.

This also speaks volumes for Warsenal's customer service and speed of response - they were also incredibly nice about me being a blithering idiot who can't be trusted with string. Anyone who has the patience to deal with me gets two thumbs up in my book...

The website warns that for some bases, you may not get a snug fit and need some glue to hold them together. It seems I was lucky - only one is at all loose, and he'll still stand up perfectly well on his own without any glue. 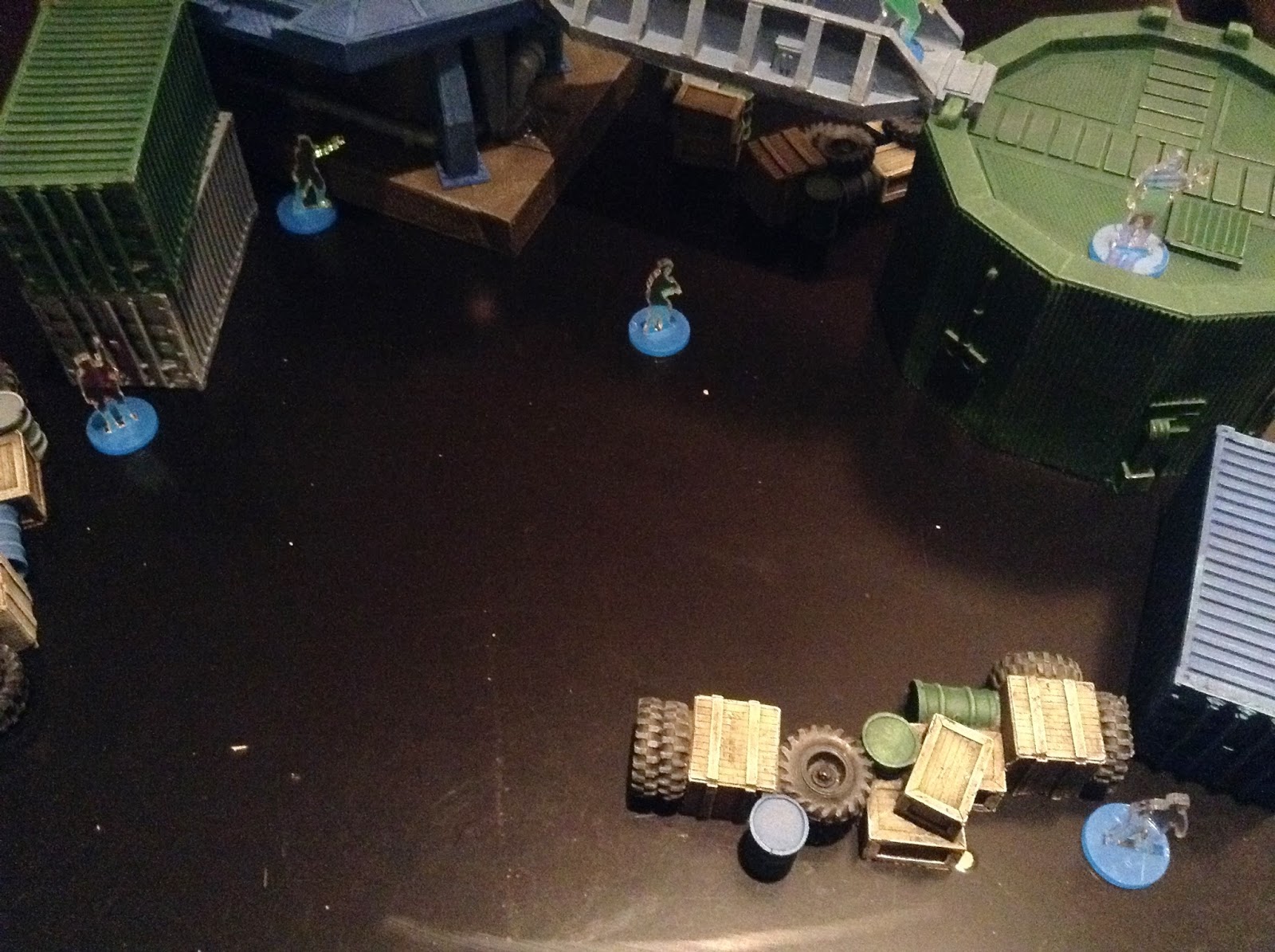 Here's a shot of a few of the markers scattered around a board. From this angle, you can't really make out how the light varies depending on the angle you're looking at them with. Obviously, these were taken for the original, unedited blog post, before I realised that the blue protective film should be taken off... 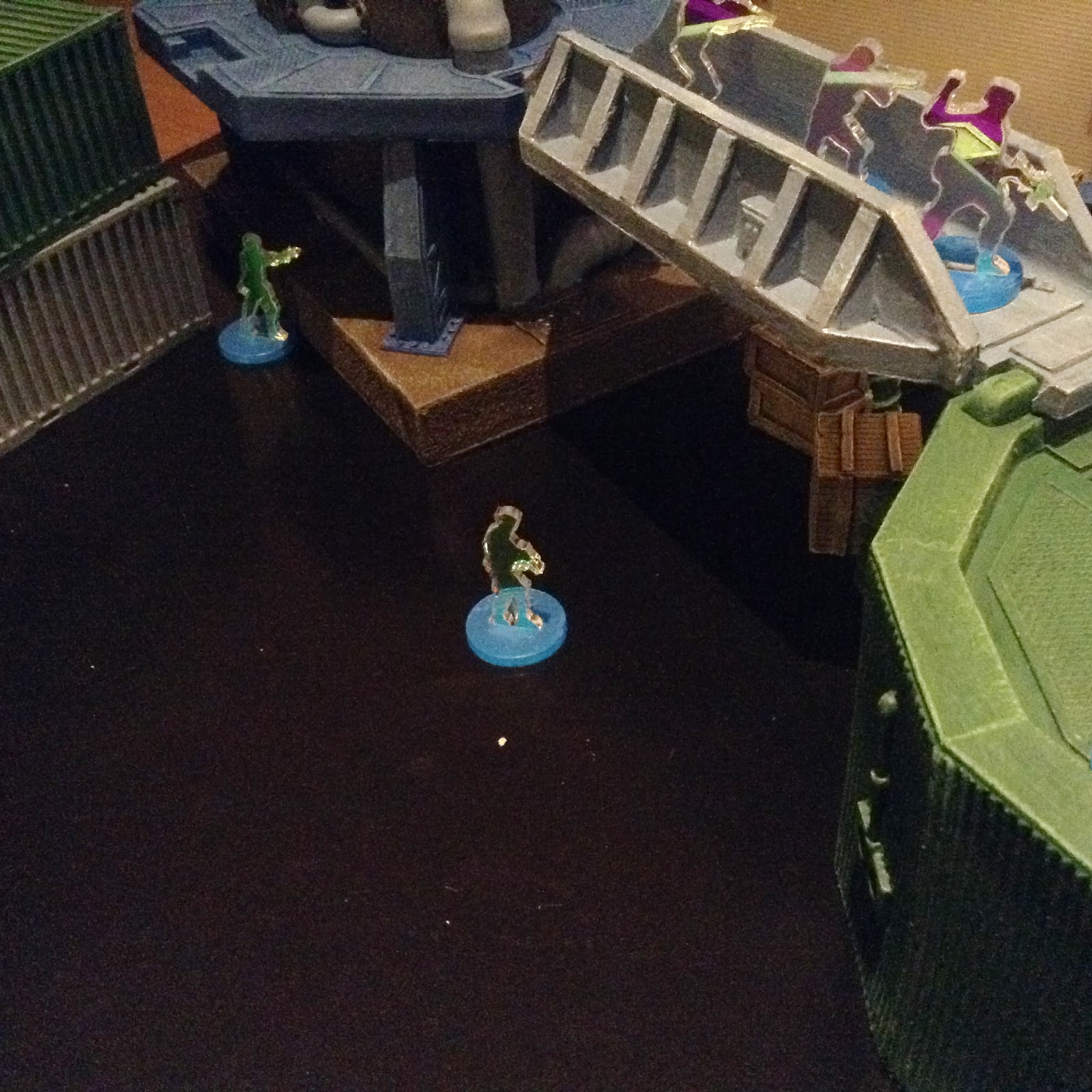 This gives you more of an idea of the different colours you can get - different shades, reflections of scenery, but also seeing through them, all in the same shot. They really look the part on the field, and will also be handy for line of sight issues compared to a flat token on the floor. When I next play a game of Infinity, I shall let you know how they fair.

In summary, you do not need these for a game of Infinity, but if you want your force to look just that little bit cooler, especially if you are using quite a lot of camo, then these are definitely for you.
Posted by The Responsible One at 20:11