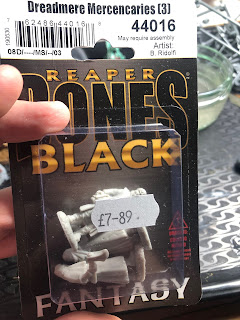 When we were popping into Chillcon during our holiday, I picked up a blister of the new Reaper Bones Black miniatures to try out. Specifically, the Dreadmere Mercenaries, which I'd had an eye on for a good long while. I was really curious as to how they'd compare to traditional Bones plastic. 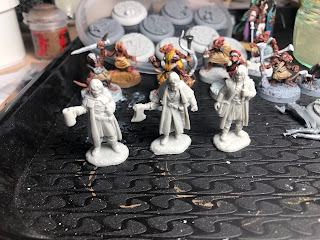 My life is too short to try and take clever photos of me scraping mould lines, but suffice to say, there were quite a few. But they were, broadly, not too bad - probably a little better than late 90s Games Workshop? More importantly, you can scrape mould lines from Bones Black, whereas you had to carefully cut with a scalpel blade with traditional Bones. I'd say it's comparable to high end board game miniatures. 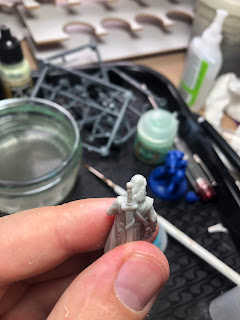 One model, unfortunately, had suffered a more significant mould line slip. His axe needed some careful carving away at to not make it look ridiculous, and there was some lost detail on the back of the head. 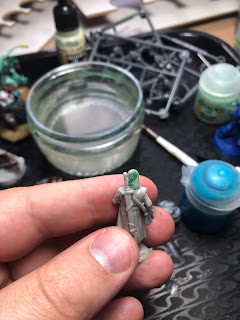 None of this was particularly hard to fix, though - I used a couple of passes of liquid green stuff in this case. Once it was undercoated, there was a small loss of detail, but I could easily have put in a little more effort to press some hair lines in had I cared. 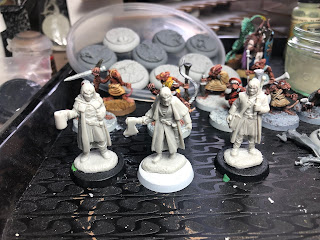 I'm not the world's biggest fan of integrated puddle bases, so I glued them onto some old GW round bases I had lying around. If you want to do this, check the copyright text in the hollow of the base isn't sticking out past the line of the base and making the whole thing wobbly. 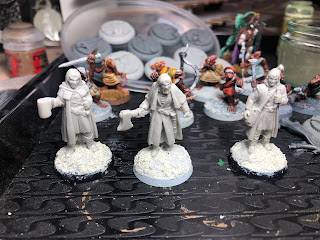 I then used Vallejo Sandy Paste to build up the bases, hide the integral piece, and add more texture than the integral bases come with. 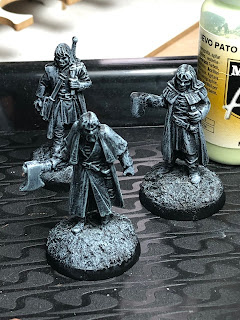 Finally, I undercoated them black, and gave them a good dry brush with white. I didn't bother taking a photo of the black stage as it really doesn't come out well at all. My plan is to paint them using the tutorial from El Soldado Tranquilo's blog and make that the second part of the review.

Importantly, Reaper Bones traditional really didn't like Games Workshop Primers, and the paint just rubbed off. No such problem here! I was able to use my GW primer without any problem, and once dry it was well adhered and shouldn't have any problems. I even dropped them a couple of times and had no chipping.

So, all in all - you may have some light quality control issues but I don't doubt if you're not confident fixing the issues you can easily return them for an exchange at your store or supplier. I'm confident enough that I was happy to forge ahead and just fix the problems.

That aside, the quality on the miniatures is good. It's not jaw dropping and crisp - there's some soft detail and they're not exactly the base for a competition quality miniature. But for reasonably priced figures for role-playing or skirmish games, I have to recommend them. I'm actually trying to think of games I could play that would use them to justify picking a few more up as I really rather like them.

I am not going for the new Bones V Kickstarter. While the saving is significant, and they have a UK distribution centre, I know some people who haven't finished painting their Bones 1 pledge! And as I mentioned - I don't have a game to use these with yet. If I think of one, I can pick up the models I need as I go, rather than grabbing a massive bundle of stuff I may or may not use.

It's nice to window shop and browse the Kickstarter, though. There's a lot of really nice models there...
Posted by The Responsible One at 19:00