Painting progress and musing on how brains work 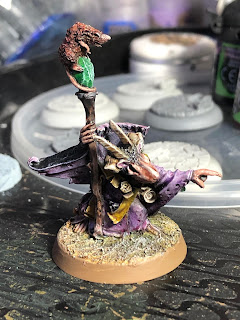 Saturday was mostly chores and tidying, but I finished up the Grey Seer I picked up from the Made to Order service a while back. This makes him the first Skaven for my actual AoS force I've finished, which I'm quite happy with. 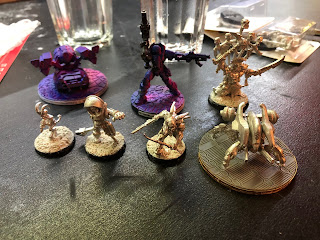 On Sunday, I wandered down to HATE to get some metal assembly done away from people who are allergic to nickel. I got three Infinity repairs done, as well as getting Queek Headtaker assembled as my next Skaven character. Two of the three Diehard Miniatures Undead also got made up - I discovered I didn't have a suitable base for the third, so I've got that ordered. Finally, I got the Caliban from Wildfire done, so that's all the Shasvastii from the starter assembled. 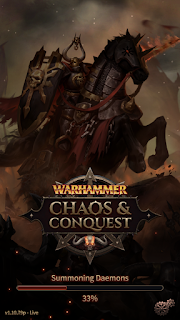 I had a couple of revelations about the hobby from the weekend. I've been playing "Chaos and Conquest" on my phone a bunch. It's an OK game with plenty of achievements to keep me interested. This weekend there was a timed "achieve a bunch of stuff and get a fancy champion" event. I decided to go for it and sunk a bunch of time into it . . . but it got quite stressful. It's reminded me that hobby stuff should be fun and not a chore. (And maybe extended runs of trying to achieve a thing over a timescale, as opposed to trying a hard thing and failing / succeeding has too similar a stress pattern to my work and I shouldn't do it.)

The other was over assembling the Caliban. He's got a very simple to fix gap in an obvious spot - but I'd not taken the liquid green stuff down to the club. Having a tiny part of one thing "not finished" almost completely countered the sense of achievement I'd got from getting eight significant things done (between painting, repairs and assembly).

I think it's about expectation. I've had very restful weekends where I got a bunch done because I got "more" than the target done, while another weekend where I did the exact same amount of stuff but I'd planned to do more - absolute misery.

So yeah - definite learning point. While I can't stop unexpected failings, I can try and set non specific goals "do this number of things" and set a low 'target' that I can then over-achieve and feel good, while still doing the same amount of stuff.

My brain is stupid and irrational, but at least I can game it!
Posted by The Responsible One at 23:43

Email ThisBlogThis!Share to TwitterShare to FacebookShare to Pinterest
Labels: Infinity, Painting, Shasvastii, Skaven, This week, to do