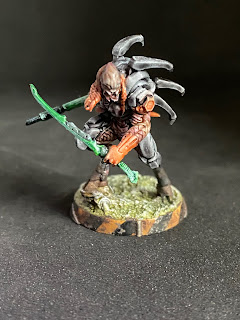 Finishing up what should have gotten done in October, I've finished the Caliban with Boarding Shotgun from the Operation Wildfire box. I've been really enjoying using the Forward Observer Caliban in Tabletop Simulator, so I'm glad I've got a model that I can use for him when we get back to in person gaming. 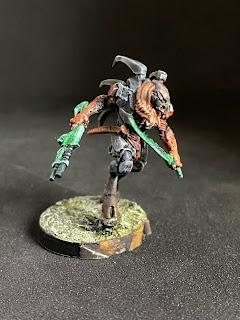 The original plan was to get a lot of Malifaux painting this last weekend, but that got abandoned in favour of sorting out a lot of boxes of things. This is, ultimately, Fine, as things that needed to get done got done. Traitor brain is being very irrational about it not being the intended thing, and thus obviously wrong. Traitor brain needs to go boil its head.
What the reorganisation has helped with has been to make things much clearer and better organised, drawing the line between outstanding projects, which I've been pretty slow to progress, and the smaller easy paint jobs that I've actually been powering through at quite a rate of late. The idea being that this will help me plan the future to a much better extent.
Posted by The Responsible One at 19:00