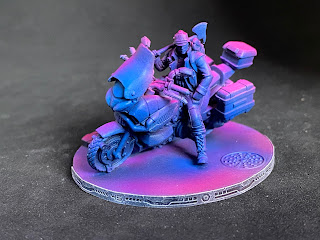 With my old commission painter having sadly hung up his brushes, I decided to give Thunderbrush Studio a go at my neon Infinity scheme. As you can see, he's done very well with it! Today I'm showing the models he completed for me for Dahshat Company.
First up is the Motorised 112 - an Ariadnan doctor on a motorbike. The model had a high SWC cost in the last edition, but his N4 update removed that, meaning I'm likely to be quite tempted to take him in lists now. 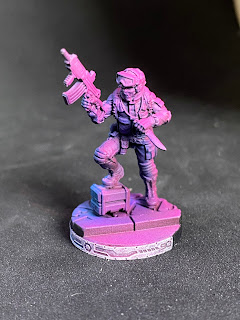 The Dozer was a more common pick, as it unlocks Traktor Mul remotes, which are super cheap orders. I already have the old model for the Dozer, but she technically has the wrong weapon load out to take Traktor Muls. Having the ability to be clearer on the table for my opponent is a good thing, even if it isn't strictly required. 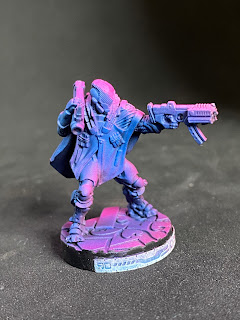 I also grabbed the newer Zhencha model, again for the alternative weapon load out. This was less "necessary" as the model usually starts as a camo token so is unlikely to cause confusion on the tabletop, but the model is just so cool looking I felt I had to pick it up. 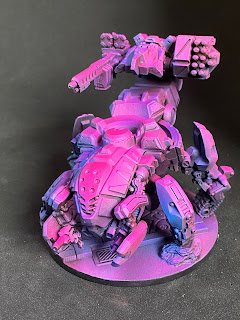 Finally for the Dahshat company batch, we've got the absolute beast that is the Maghariba Guard. I never quite got around to trying this out in N3, so I'm looking forward to trying some builds that include it. 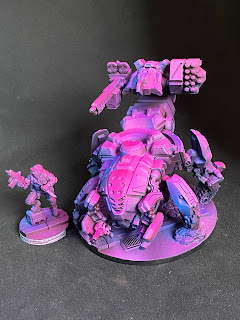 Here she is standing next to the Dozer Engineer to give some idea of scale. The whole model is metal, so it's really heavy to pick up. I'll definitely be packing her with a lot of foam! 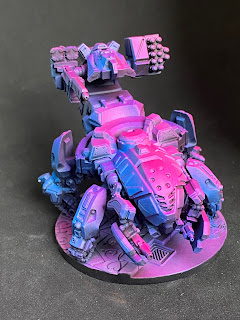 I haven't really had a chance to try playing with Dahshat Company in the new edition yet - I've mostly been focussing on getting my Shasvastii game up to par. They're in an interesting place. Last edition they benefitted from taking a couple of strong attack pieces with loads and loads of cheap troops as back up.
The new edition limits you to fifteen models in a list, so that build isn't going to be happening any more. I'm also not quite sure how well it would actually do in the new edition. It relied on a lot of high burst weapons, but as the new edition favours armour a little more, I think those builds lack a solution to heavy armour. It's a fundamental rethink in terms of playstyle, and I'm looking forward to trying to solve that puzzle.
Posted by The Responsible One at 19:00