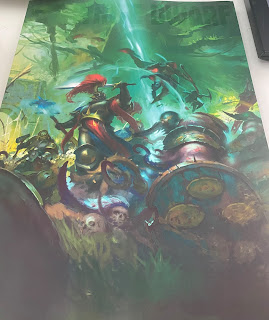 As my readers in the UK will know, the other week was too hot to do anything sensible. Conveniently, I found the latest White Dwarf lying around, and thought I'd give it a read. I have a subscription, but I've not been reading them for a little bit. I was notably pleased to see that the packaging it came in was now recyclable. 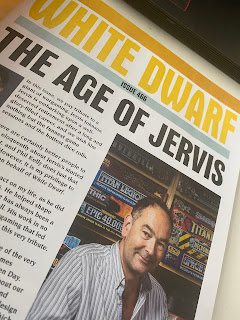 The big focus of this issue was that Jervis Johnson has retired, so they were taking a look at his career. I don't think there's any dispute that Jervis has been a massive influence on the Games Workshop hobby over the years. The issue really served to emphasise that. 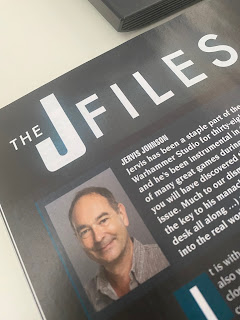 The J Files were an old article where Jervis was given some column space to have a bit of a ramble on whatever he felt like. It saw a final return for Jervis to talk about the importance of the hobby to people and the impact it has on people's lives. I like talk pieces like this in moderation, and they weren't enough here that it started to drag. 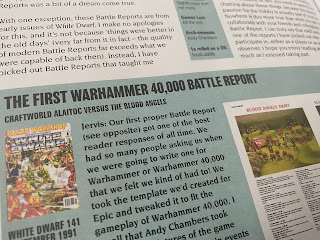 There was plenty of delicious nostalgia this issue, looking over loads of stuff I remember from my Yoof. Being reminded of loads of cool articles I would read at school, or in my bedroom at home growing up was a nice feeling. I keep thinking about going back to re-read this, which is always a good sign. 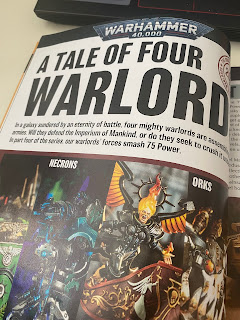 In a "what's old is new again", they're doing "Tale of Four Warlords" again. There was a little bit of reality crashing in as these articles were written back in the middle of full lockdown. If it wasn't for that, the new figures aside, it would have fit happily into the White Dwarfs I remember and love. 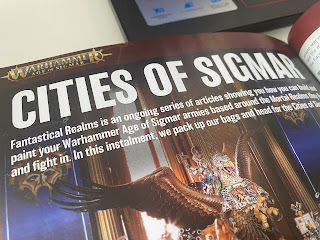 There were a good few fan / hobbyist armies articles as well. They gave me a bunch of hobby ideas and got me really enthused about painting. I kind of want to stop writing this blog and go back and look at the models again. 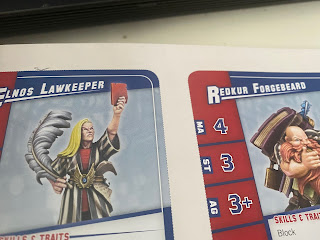 There was also a whole bunch of rules for stuff. A couple of 40K articles, some Blood Bowl stuff, scenarios for Aeronautica Imperialis . . . While I don't play all the small games, new content for most of them was a really good sign of support that I appreciated. Age of Sigmar just had hobby articles, but I suspect that this is due to the recently released new edition and production schedules.
I particularly felt the article for Torchbearer fleets looked excellent. This was an option to build an army around the combined fleets escorting Primaris to meet their new chapter. While I was a little sad they missed Sisters of Silence out of the models you can take in it, it gives a ton of interesting options. I'm not sure if it's legal for tournaments, but that level of "new stuff you can try" really got me excited to see what else they'll put out.
So, in summary, White Dwarf is pretty good right now. I did give that away with the title, but this isn't really a complicated concept. They've got a good balance of hobby stuff across their different games, new rules and fun games you can try out if you're playing regularly, and stuff that could inspire you to a new hobby project. It felt a lot like the old White Dwarfs I used to read as a kid, and that can really only be a good thing.
Posted by The Responsible One at 19:00