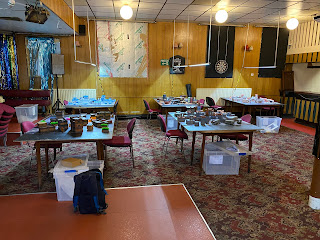 Last weekend was Red Star Blues, an Infinity Tournament held at Hackney Area Tabletop Enthusiasts (or HATE). It was a small event with ten players, though it's intended the next one will be bigger now the first has been a success.
I decided to bring Vanilla Combined to push some models around and shoot some things. I haven't played Vanilla at all before, so I wasn't confident with how I was going to do, but was happy to just roll some dice and have fun. 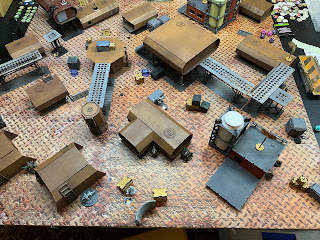 First up was Supplies, against TomxJ who was running US Ariadna. I took deployment and and was facing off against a strong Grunt link team with two Snipers and a Minuteman Missile Launcher in ARO. 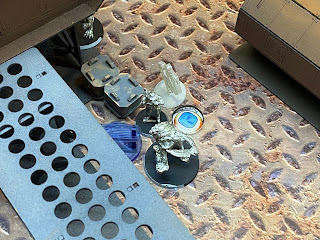 Under the smoke from the Devil Dog, a Foxtrot opened the Supply box and handed the box off to the Devil Dog who ran away with the box. In the centre, again under smoke, they grabbed another box and ran away.
My attacks on the US reaction pieces took ages to take them down, and even at the end of the game, all the reaction pieces weren't down and I still couldn't move around enough. 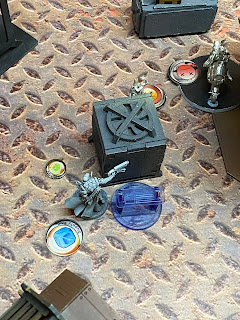 My Malignos Hacker ran out and grabbed a box, but wasn't able to stay up to hold the box. I managed to get a Classified, meaning I lost 6-1. 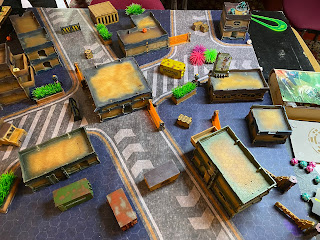 Game 2 was Frontline, and I was up against Chappers playing Invincible Army. I was expecting it to be a very bloody game given two very punchy armies. 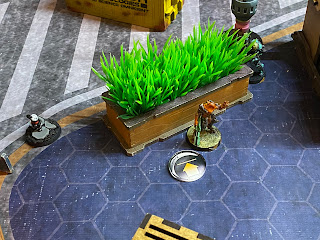 My Shrouded Killer Hacker held up the Hulang for a while, but couldn't take him down... 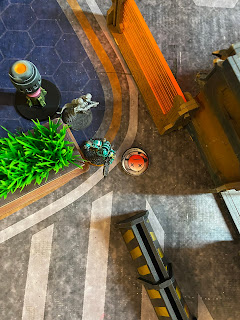 While the Libertos snuck past Krit Kokram and shot him in the back to take him down. He was then able to score the Extreme Prejudice Classified. 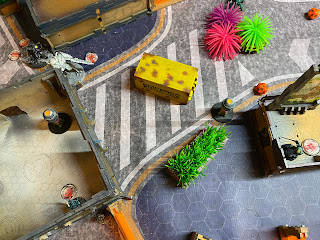 The Invincible Army were having trouble taking out the Avatar, but I was running out of other models. I needed to push up to the furthest board area to score points, which meant the Avatar was over-extended. A Zhencha was able to get behind it and crit with a Panzerfaust, taking him out, leaving me with a 9-2 loss. 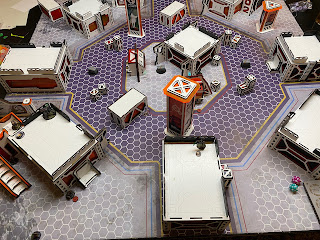 My last game was against zenithed, who was also running Combined Army. He was bringing a Charontid, while I brought the Avatar again. It was a simple game of Firefight to finish the day off. 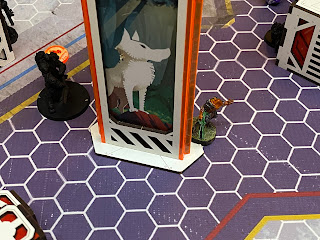 I managed to get my Killer Hacker up to his Charontid to score a Classified . . . 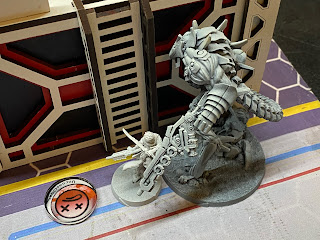 A Caliban Spitfire (we couldn't find the model so used a Speculo) tried to take out the Avatar in close combat, but was unlucky with their dice, and got taken out.
In the end, zenithed couldn't hold the Avatar off, and I was able to score a comfortable 10-2 win for my last game, leaving me 9th out of 10 players. It was a great day, I had a ton of fun, and I'll absolutely be going to the next Infinity tournament H.A.T.E. puts on.
Posted by The Responsible One at 19:00