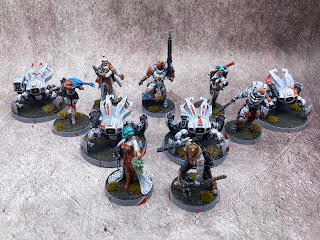 I got another batch of White Company back from That Mr Shy. When I ordered these, the intention was that they'd be the last bits I needed to start playing. However, unexpectedly, the EIC announced a tournament for the end of October, and included Unmasking, which requires three civilian models when I only have two - I've sent a small painting batch away to make up that gap. 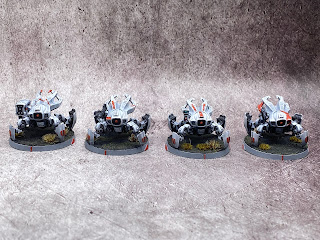 First up in this batch are the Dronbots. Remotes are such a key utility piece in any force, I felt it was best to get one of each of the four profiles ready to play to give me much more flexibility in my list building. I may want a second of some of the options, so I need to have a bit of a think about which ones to double up on first, but this is good for now. 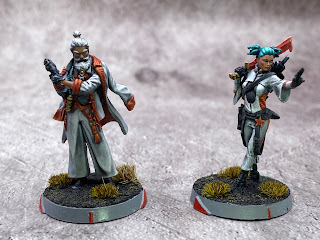 I also made sure the batch included the last two "named characters". Not proxying a named character is much clearer for opponents, and both have good uses. Valerya is a good but fragile Hacker, but by joining a link with a Tinbot, she ends up being much more survivable. Meanwhile, Tao Wu is a fringe "sometimes" model that I don't think I'll use often, which is a shame as the model and paint job are absolutely stunning. 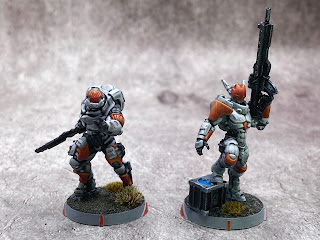 On the heavier side, there were two Heavy Infantry I felt are key to White Company that I was missing. First up is the Haidao Hacker. Given one of the significant risks to Heavy Infantry are Hackers, having a model who specialises in taking out Hackers in a Heavy Infantry fireteam seems like a good call. Meanwhile, the ORC Feuerbach is an amazing gun platform and I want to try both that and the HMG to see which I prefer. 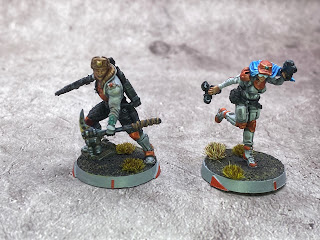 A second Varangian Guard won't be something I take every time, but it will be common enough that she was worth picking up. Taking a WarCor to make up points and be the fifteenth order is super common, so that was a no-brainer. 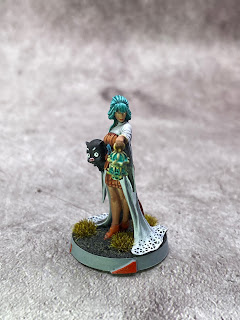 And finally, I had a limited edition HVT model I wanted to use for White Company so included it, bringing me up to two for now. The most I might need is five (for Rescue) so I will need to get a few more, but the priority at the moment is getting the third for Unmasking at EIC.
I'm pretty pleased with how the force is coming along - the next stage is already with Mr Shy to get painted up ahead of EIC, while I get some practice games on, whether in person or on Tabletop Simulator.
Posted by The Responsible One at 19:00