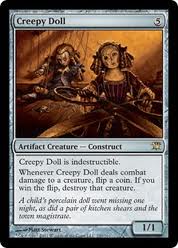 Today, I learnt how to play Malifaux. A few people had been asking Dark Sphere on and off about it, but finally enough interest got together for someone to get the local Wyrd Henchman to pop down to do some demo games.

I ended up in a three way game between the Henchman playing Von Schill, another new player running Kirai, and my own Collodi crew. I was a few soul stones short, but still coped pretty well.

We simplified things a bit while people learnt, so kept the play order constant, for example.

I was quite lucky at the start in that the Resurrectionists and Freikorps decided to beat the tar out of each other while I ran up to the objective and sat on it. Then came the moment that my crew came together and pulled off their party piece. At that point, everyone decided it was time to beat on the dolls.

For those who don't know Malifaux, Collodi is a crazed sentient puppeteer / puppet who controls a bunch of Marionettes. He can rebuild them when destroyed, buff them horrifically, and they all pull each other around by their strings to do horrible things with movement and synergy - in particular, they can activate all as a single group in a game where you take it in turns to move one model at a time.

So, the party piece went off in that Collodi suddenly pulled all his puppets over to him where he was fighting some model, and they all went to town on them - each individual one doing little bits of damage, but the sheer number of attacks ripping a couple of quite hard models to pieces in a single activation.

And as I said, then everyone decided to have a go. :)

Thing is - I could see I was making a ton of mistakes - I was forgetting various skills and powers, both in terms of extra offensive power and the ability to reduce damage more. Despite this, I managed to pull out a win, killing Kirai and leaving the last ghost to be pulled down by the Freikorps, before slowly but surely cutting down the Freikorps one after the other.

The last one to go down was the new plastic Strongarm, who was an absolute monster to kill. We eventually decided I was wearing him down faster than he could kill my ablative puppets, and called it a day.

My only real concern is that it looks quite possible that Collodi as a crew have the potential to be no fun to play against. They do several horrific combinations, are cheap as individual models, and are "tough but fragile" (hard to hurt, but when they do finally get hit solidly, they come apart). But you can repeatedly stand them up, rebuild a few, repair a few, and hit back again and again and again. It must be no fun to have to kill the same models four or five times in a game.

So this is the dilemma - I can play with Collodi, and probably win quite a lot - but I'm a little concerned that once I've got the hang of the way he plays, not many people are going to want to play with me. And afterall, it's not so much the winning that matters, its playing the games.
Posted by The Responsible One at 23:03