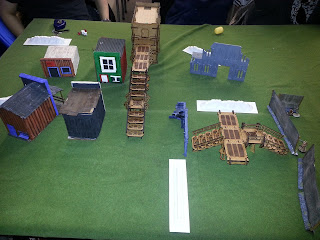 It was cold and misty in the frontier town. Inquisitor Bernard's staff had intercepted a communication which he suspected to be the work hereteks. Unknowing how far within the Machine-Guild of Averene the taint had spread, he decided a careful approach was required. Rather than going himself, he sent two of his band. Yudas Hayle was a beastman inducted into Imperial service, and Ricardo y Brion a sanctioned psyker, but if they were killed, the actions of a mutant and a psyker could easily be disavowed. Ricardo used significant coin to hire two Guard veterans, who referred to themselves only as Mutt and Joff, preferring that their last names weren't used.

The message indicated that an encoded map giving the location of valuable archeotech had been left on the roof of a newly constructed administrative building in a small frontier town. Given that if the information was permitted, it would probably have been passed through additional channels, the Inquisitor planned for his staff to intercept it.

Cautious, they approached the site from the east, skirting the perimeter fence of the settlement, by the ramp for the transporter landing pad. 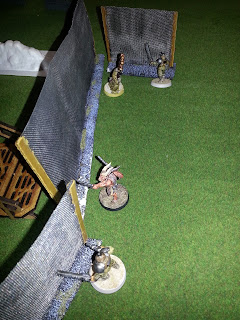 Unknown to them, hostile forces were approaching from the west - who in turn were unaware that their simple 'pick up' mission was compromised and that they were walking into a firefight.

The two forces advanced towards their eventual objective, high on the recently finished administratum building. 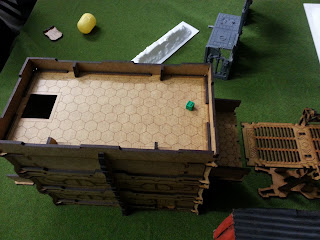 The Heretek Synek ordered his guardsmen to screen his position as he went forward to recover the data he was seeking. 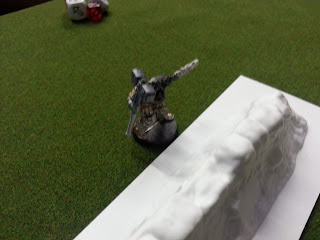 Meanwhile, Yudas, who is a little more cautious than his companions, gets left behind by Joff as they cross the transport station, planning to cut off any escape via the transport network. 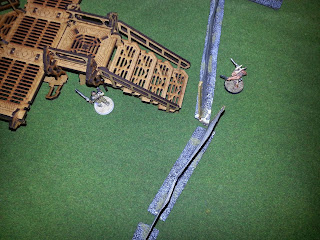 Meanwhile Ricardo and Mutt sprint across the open ground to try and recover the item directly. 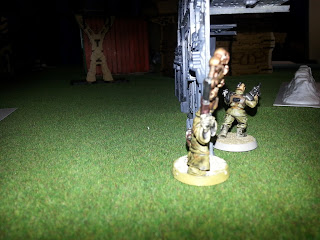 In the distance, they fail to notice Techpriest Synek, who in turn, has not spotted them in the early morning mist... 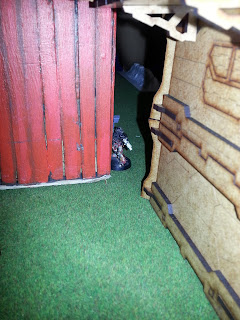 Malek and Verrin advance up the street, covering each other in perfect military drill as they progress. 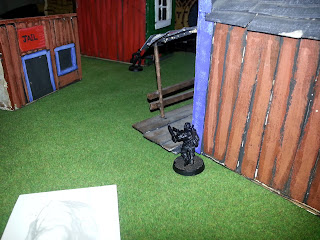 Meanwhile, Yudas and Joff reach the walled entrance to the transport station, and set a trap for any fleeing in this direction. 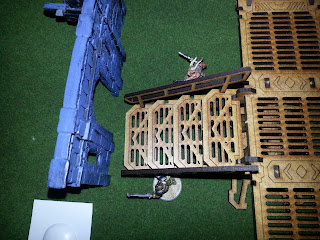 Malek and Verrin creep down the side of a building towards the transport station. 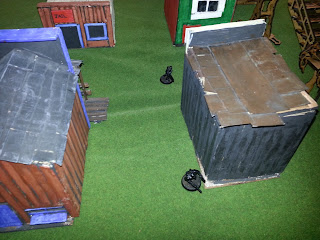 Malek, in the lead, starts advancing towards the station and Yudas, seeing hostiles, lets loose a lasgun shot. It ricochets off the guard rails of the stairs from the administratum building, but across the town the various combatants all hear the shot and realise something is up.

Ricardo and Mutt race for the data, but are too late as Synek has got there first! 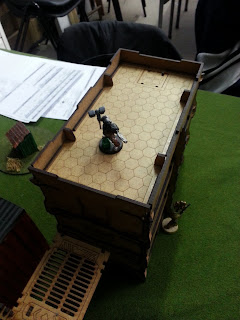 Frustrated at his missed shot, Yudas hefts a frag grenade and throws it at the oncoming hired guns, blowing Malek off his feet and lightly injuring him from the shrapnel. The smell of blood reaches his nostrils and a red mist descends - he charges out into the open screaming and hollering. Joff curses and runs after his employer, careful to stay behind the crazed mutant. 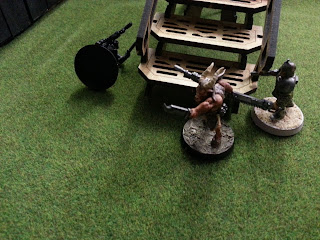 Malek desperately tries to get to his feet as the crazed beastman stabs him again and again, but its all too much and soon he falls into blessed unconsciousness. Verrin takes some shots (did he throw a demo charge? I forgot in the excitement), but doesn't seem to be able to hit the back of a barn door.

Synek realises he needs to be quick. He jumps from the roof of the building onto the walkway and charges down into the melee. Ricardo tries to influence his mind to slow him, but can't focus in the panic of the firefight. Cursing at the 'amateur night', Mutt sprints after the rogue techpriest. 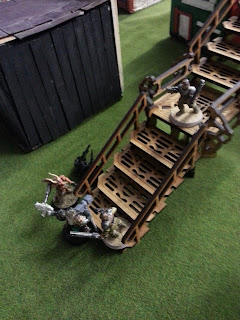 Yudas and Joff are taken by surprised by the armoured, hammer wielding Mechanicus, and Yudas' knife just can't get a purchase, less so after a brutal blow from the hammer smashes his knife arm at the shoulder. Correctly judging the crazed mutant as the least of his worries, Synek turns his attention to Joff, first catching him lightly on his right leg, and the lapse of concentration that causes giving him the opportunity to swing his hammer with full force into Joff's right arm, shattering bone and causing him to scream in pain, dropping his pistol. In return he desperately swung his chainsword, catching Synek firmly in the belly, and with a scream, the techpriest dropped to the floor unconscious.

Verrin quietly snuck away from the fight as an exhausted Joff looked on helpless as a frothing, lunatic mutant who employed him stalked towards him, bloody knife raised . . . and then sank to the floor unconscious.

"Bloody twist" said Mutt, shaking his arm from the bone jarring impact. "This has been a mess of amateurs from start to finish. Lets get out of here, give the witch his trinket and get paid."

With that he bent down to pick up the small metal box they'd been hired to retrieve, and took a rough hold of the rank beastman to drag him away.

"What about these?" asked Joff, gesturing at the Mechanicus and his lightly mutilated employee.

"Leave 'em." said Mutt. "This job stinks already, and lets not get some murder charges laid on us. Their friend pegged it and if we do get charged, I'll stick with assault over murdering a man in cold blood any day."

Joff nodded, retrieved his laspistol, and started limping back to the transport station, his friend dragging the dead weight of Yudas behind him. This witch had a lot to answer for...
Posted by The Responsible One at 23:15