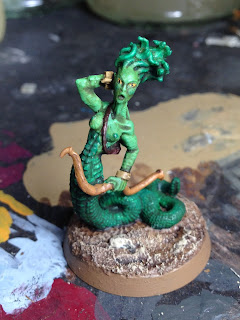 The problem with an assembly blitz / focus is that it turns out that lots of pictures of well cleaned up part assembled models really doesn't drive blog traffic. So, to shamelessly pander to what gets clicks, here's a Reaper Bones Medusa I painted up this weekend. It's just a basic paint job, but I had mostly bought her at Salute as a model to learn how to paint Bones on.

I also think she might be the first ever model that I bought at Salute that I've painted myself. That's probably bad, right? I should probably fix that. 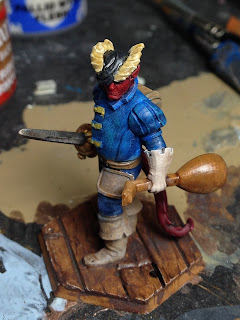 I also got in some solid progress on Myth, who is my Tiefling Bard. He's a Heroforge 3D print. I want to get more detail done on him, and some of the base coats are quite rough. I'm also really not sure about the colour I've done on the gloves. Anyone got any ideas? 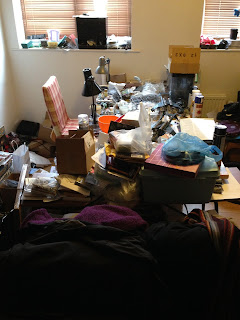 I've previously mentioned my . . . somewhat crowded 'painting table'. It's the dining room table, and half of it should belong to my beloved wife. This is not a source of harmony in my life. So, time to make a bit of a dent in it!

The mess, not the table. The landlord would get grumpy. 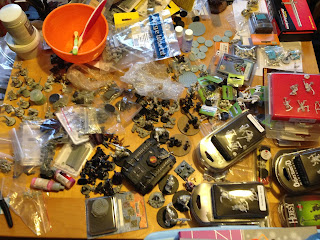 Those of you who remember my Goblin Accident at Salute last year will see some familiar suspects on the right of this shot. So... Lets get that sorted out. 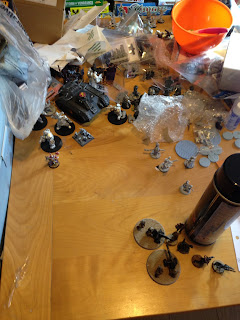 First, I cleared a space and put some stuff away so I actually had enough room to do some organising. I should probably do some more of that clearing and putting away thing in the future, too! 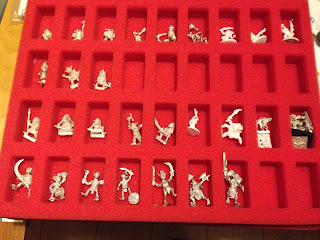 Then I grabbed some foam trays and started sorting the goblins out into sections. I now have a good idea of how many goblins I have, groups they can be sensibly assembled and painted in, and so on. The foam trays take up much less space than the piles of poorly piled up blister packs, so they can go away and take up far less space.

I didn't quite have enough bases, so I put in a small base order with Heresy Miniatures, who, it turns out, stock a good number of different types of bases as well as awesome models and stuff.

I'm feeling really good about my hobby progress this weekend. I've got a finished painted model, another model up to tabletop quality and ready for details and faffing about, and the Goblin Problem is now a Manageable Goblin Problem With a Plan.

It turns out that doing hobby stuff and getting successes in turn makes you feel more enthused, so you end up wanting to do more hobby. This feels like a good positive re-inforcement circle I should continue...
Posted by The Responsible One at 19:00