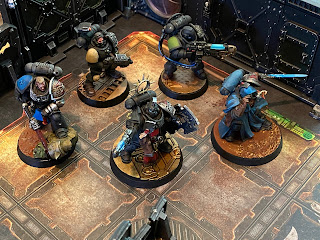 My friend I tried out Grimdark Future with a few months back set up a mini campaign day for three of us to play through. I brought my Deathwatch, my friend brought his Necrons, while our third player borrowed some of my friend's Eldar as she's not finished painting her Sisters up.
So, on this mysterious backwater planet, the Inquisition have noticed strange activity and possible Eldar, so the Deathwatch were sent to investigate. 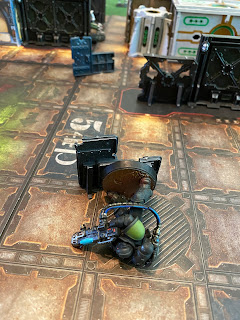 The Deathwatch scouted into an Industrial area that had started to mysteriously collapse. As they took up positions, a strange ray gun flared and the squad's gunner fell to the ground. 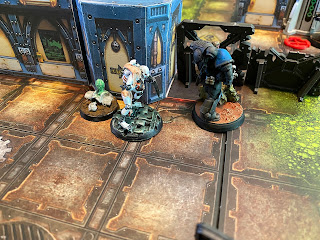 The close assault specialist ran up to support the kill team's scout, who was accessing a strange Xenos device to determine it's purpose. Out of the dark leapt a mechanical horror, draped in human skin. 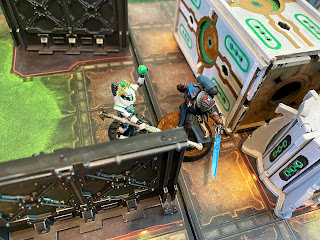 Spotting a more ornate mechanical creature, the kill team's psyker Librarian Abelii charged in and engaged in a brutal duel. Neither were able to gain the upper hand, even with the Librarian unleashing a lightning storm on the powerful Necron. 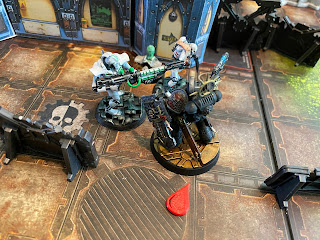 Lieutenant Clypeus held off the horrific Xenos, and another of its allies that materialised into existence. He was badly injured, but held it together to stay standing. 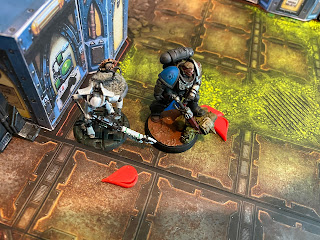 Meanwhile the close assault specialist sprinted to try and retrieve the squad's servo skull that had been sent to scout ahead, but more mechanical Xenos had been tampering with it, and didn't fall to his desperate assault as darkness fell, and the two forces separated.
In the end, both forces had gained intelligence on the other's activity, but neither had managed to gain an edge... 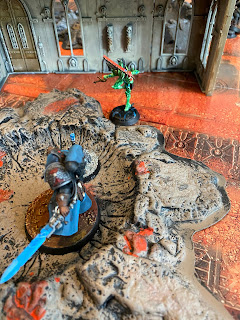 Heading out into the wastes, the team hadn't got far before suddenly Eldar leapt out of the shadows to attack! 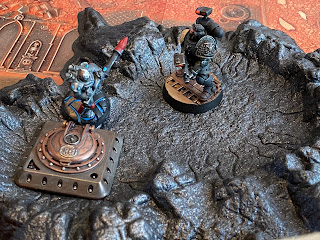 The squad's scout crept around the edge to take out the Eldar's fire support. 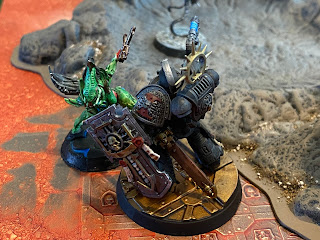 Meanwhile the Lieutenant desperately fights to hold off another one of the Eldar's infiltrating attackers. 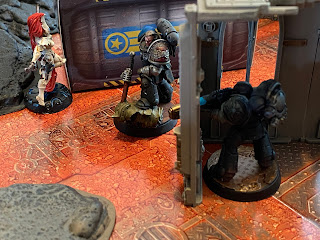 However, as the Eldar's assault troops charge in, the Marine's armour holds true to protect them... 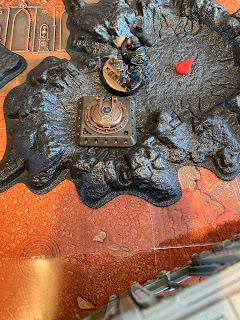 And the Marine counter attack brutally cuts down the aliens, leaving them in control of the battlefield so they can gather intelligence as to what the Xenos are up to . . . 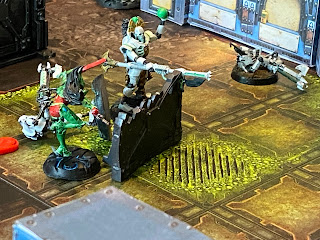 Meanwhile, elsewhere the Eldar strike against the Necrons, striking out against their ancient foe. 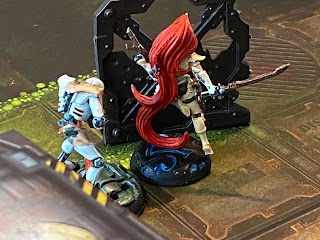 With a suspicious run of luck, the Necrons are swiftly vanquished. Were they manipulating fate, or was it pure luck?
It was a day of games and catching up with friends. It's something I wasn't doing much even before the pandemic, and something I'm keen to do more of in the future...
Posted by The Responsible One at 19:00