Where am I? What's going on? 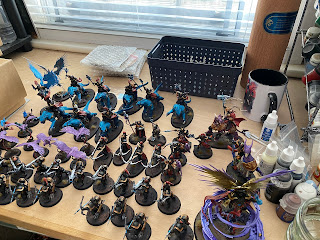 I went away on holiday! I went to a friend's wedding! We went to Warhammer World, and played a couple of Escape Rooms! I took no Blog Suitable Photos of any of it!
So. I'm back at the flat and now the laundry is caught up, I need to work out what hobby stuff needs doing. These Stormcast need photographing and putting away. But that's blocked right now because KR Multicase ran out of some of the foam I need and it needs cutting fresh. Hopefully it will be here soon! 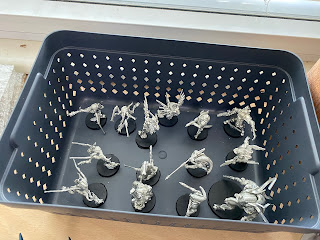 My most recent Infinity assembly batch needs basing and undercoating. A couple need some bits gluing back on. This is the Combined Army reinforcement packs from the Defiance Kickstarter, so a bunch of assorted useful models. 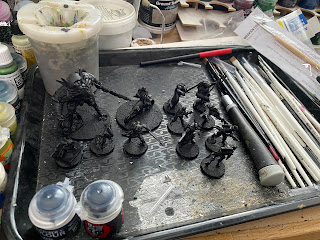 I'm also halfway through hand undercoating any bits of the previous assembly batch I might have missed with the spray can before I do  the zenithal prime to make them ready for paint. I need at least a couple of these models in four weeks time, and I'm away at Empire next weekend. 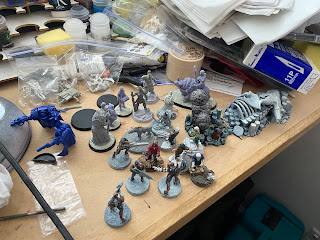 Here's the muddle of half finished stuff I've got lying around. The Nox Troopers and Cadmus need finishing. The last of the Underworlds terrain needs doing. There's then a few D&D figures it would be nice to paint, a smattering of models from Salute that need undercoating, and the two Horus Heresy figures I need to undercoat. 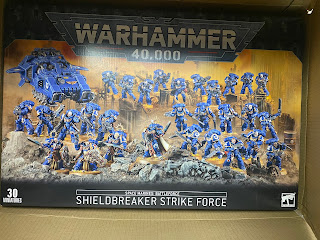 I've also sent off the last of the models for my Deathwatch to get painted by Squiggle's Studio. Once these are back, I'll get some games in and work out what the biggest priority is for gaming purposes.
There's definitely way too much "in flight" stuff, and I need to finish off some bits and bobs so I can put them away or on the "later" shelf and clear a bit of space to think. Lets see how I get on before Empire...
Posted by The Responsible One at 19:00