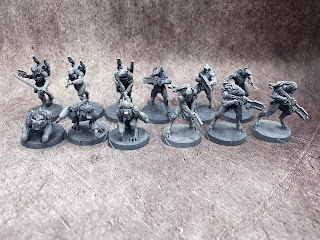 I got the other half of the Defiance Combined Army models prepped and ready to paint. This is most of the "line troop" type models, in four sets of three. 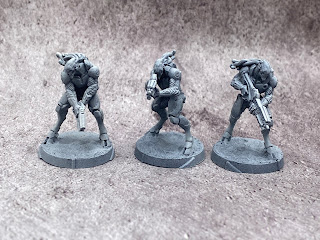 First up, we have the models I'm likely to use the most in Infinity. These are Seed Soldiers, cheap forward deployed troops with a couple of good specialist options. I've run lists with three or four of these regularly, but there's currently only one general release model, so these are an incredibly useful addition. 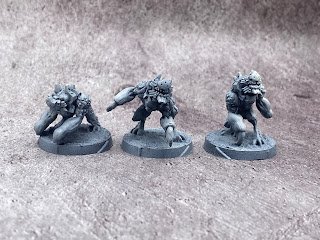 I've also got my first "proper" Taigha. You might remember I modelled up the breach markers to be used as Taigha as a quick stop gap measure, but once these are done I reckon they'll look much better. 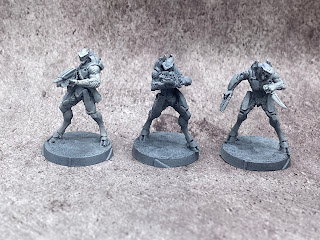 I've already got eight Nox Troopers, so these probably won't see much use. The most likely is the pistol model may see service as a spare Hacker, but I already have three Combi Rifle models, and I really can't see a use for a second Nox HMG. 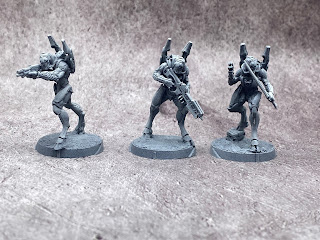 And finally . . . there are three Cadmus. I'll likely only ever have one Cadmus in a list, but having a bunch of different weapon options means its clearer to my opponent what's going on.
I'm not sure when I'll get my painting done, but these are all now ready to pick up when I need one, which makes it easier to casually get started.
Posted by The Responsible One at 19:00

Email ThisBlogThis!Share to TwitterShare to FacebookShare to Pinterest
Labels: Combined Army, Painting, Shasvastii, to do